Ciudad Perdida, the lost city… I won’t go too much into details, as I’m sure most of you aren’t avid archaeologists, but just so you know the gist of it. Ciudad Perdida is an archeological site in the Sierra Nevada region of Colombia, supposedly founded about 800AD – so it’s even older than Machu Pichu. And that was pretty much all I knew about it beforehand, and of course from the pictures I’ve seen that it’s made out of terraces. My sister Špela was really rooting for this hike, I was a little less enthusiastic, worried about our lack of shape, but in the end after reading several testimonials online that assured us the hike was doable, especially if we took the 5 day one I was convinced. The price was a bit of an issue as well, but in the end we just decided to go with it, and go.

On our first day in Santa Marta, a small coastal town with a bit of a reputation (maybe slightly better than the neighboring Taganta) we found the agency that organized the tours – I’m not sure, but I think it was called Magic tours. We were pretty reassured at how easy everything was, and even Santa Marta turned out okay – we realized the only reason it had a bad reputation was because it was so small, it was harder to avoid the ‘bad’ neighborhoods.

And then before we knew it – it was time to go. Our hostel kindly arranged for us to store our luggage, and a van picked us up around 9 am. There we met our fellow travelers, and any initial awkwardness was quickly gone as we crammed inside and started bouncing against one another on the rocky road. 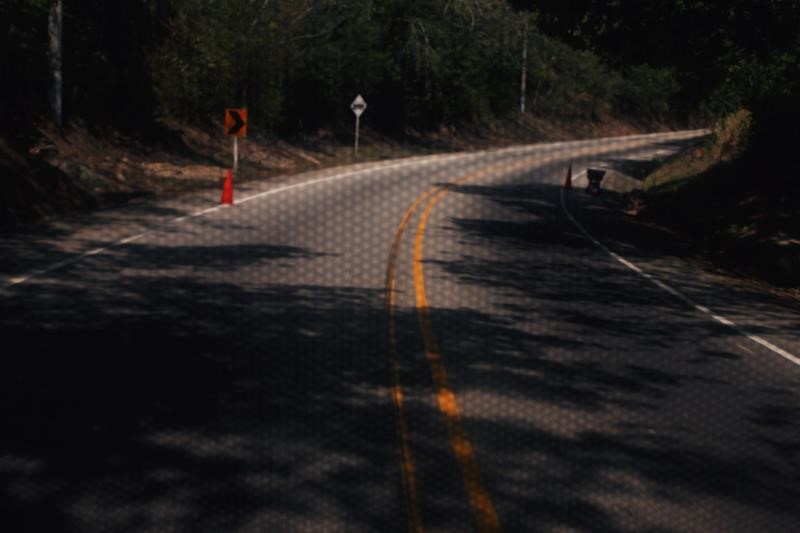 Ciudad Perdida – View from the van

We were all pretty relieved to make it base camp (it wasn’t really called that, but it just sounds so cool!) and after a hearty lunch we set off. Me and Jonathan (a New Zealand actor who does just the best Jamie Oliver impersonation) jinxed us all, as we skipped along the rocks and wide paths, deciding that “this was no big deal. Oh this is eeeeeeeeasy. We could do this all day.” well. Let me tell you, we quickly ate our words as the steep uphill path began, and sometimes you literally had the feeling you were going to bite your knees. Count in the heavy backpacks, the humid that made you think you were in a portable sauna… let’s just say we were all pretty happy to make it halfway up, were we were greeted by Josefa, the watermelon eating dog. (This was twice as funny to us as our mother’s name would be Josefa in Spanish). 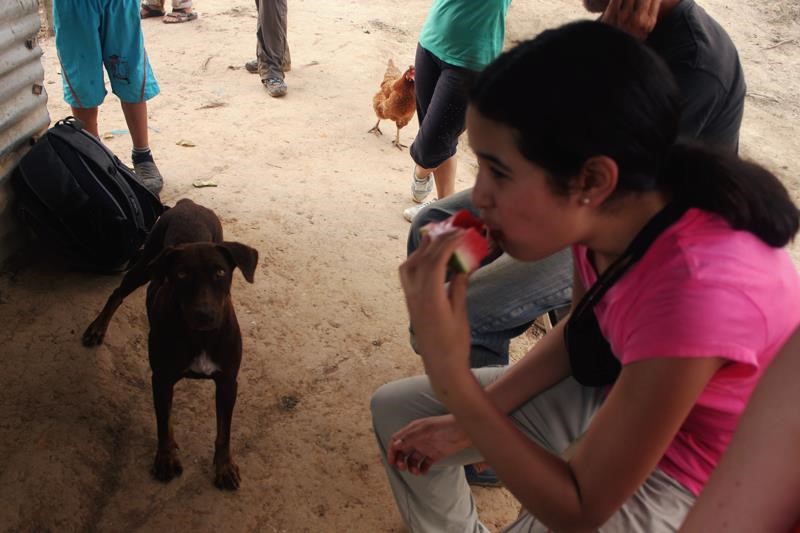 dog Josefa – here he is with Anna, eyes on the target 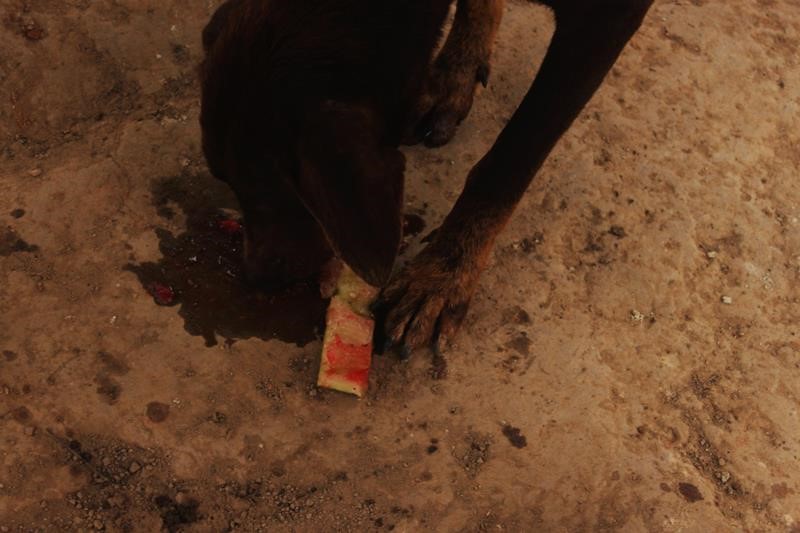 But then, oh then we made it to the top. The views were nonexistent due to the fog, it was looking like rain, we were hungry, exhausted… but I don’t remember feeling all that bad. In fact, I think we were all pretty psyched to have made it. 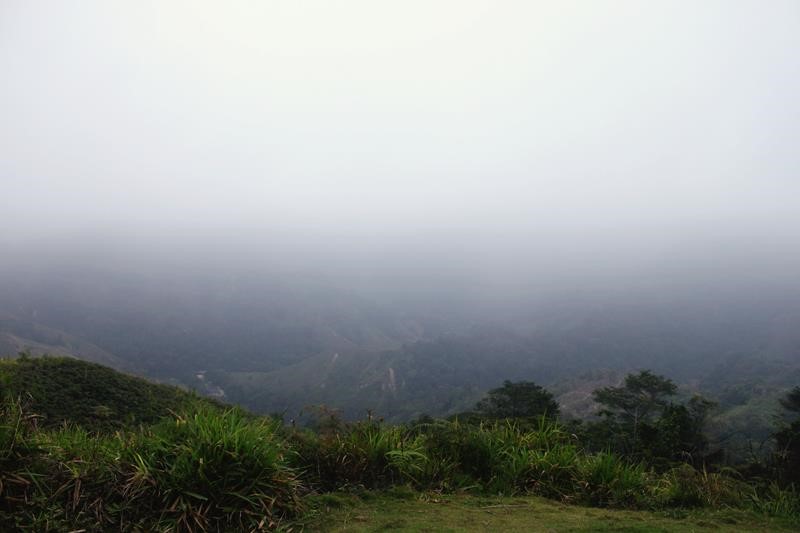 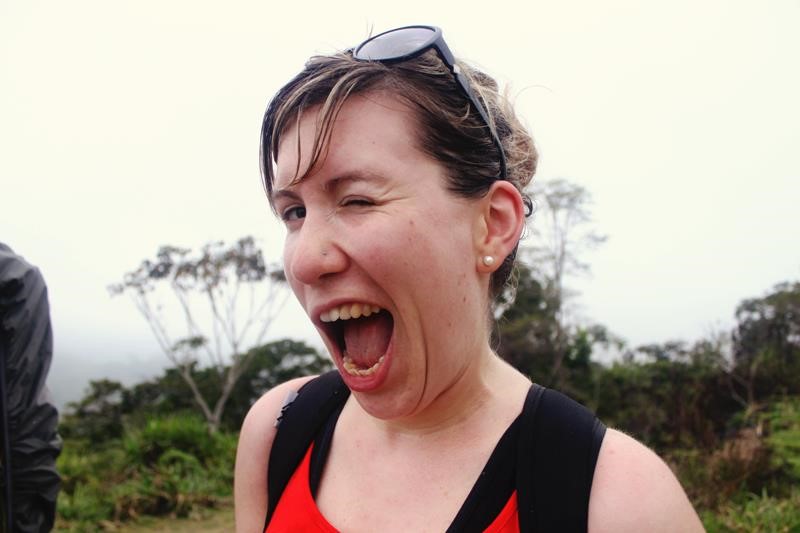 my very excited sister. can you tell? 🙂 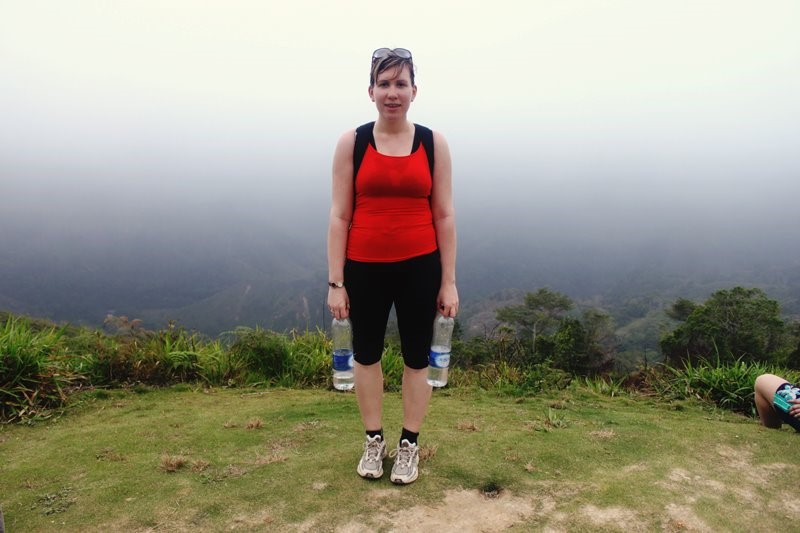 yeah okay, maybe not so much 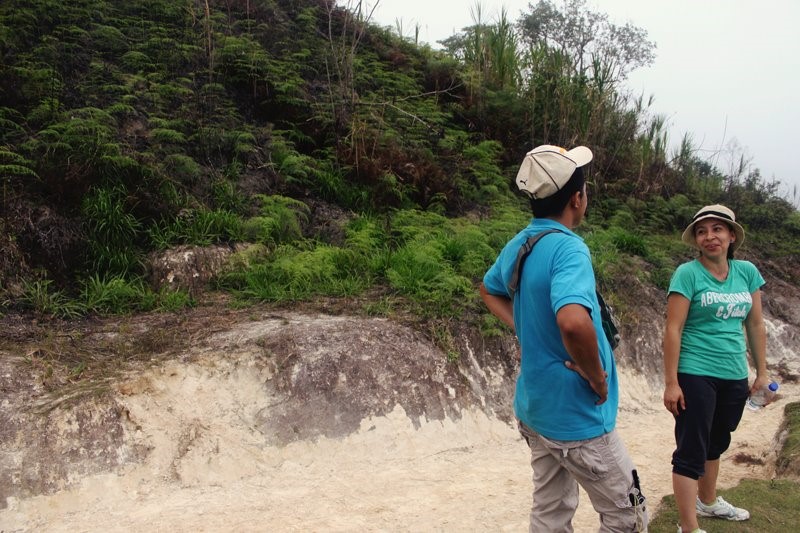 our guide Lubin and our cook Flor, not even breaking a sweat

Eventually we made it to camp, where we were greeted by the comfiest wooden benches you’ve seen, our dinner cooking, cold freezing (but welcome) showers and erm, beds. 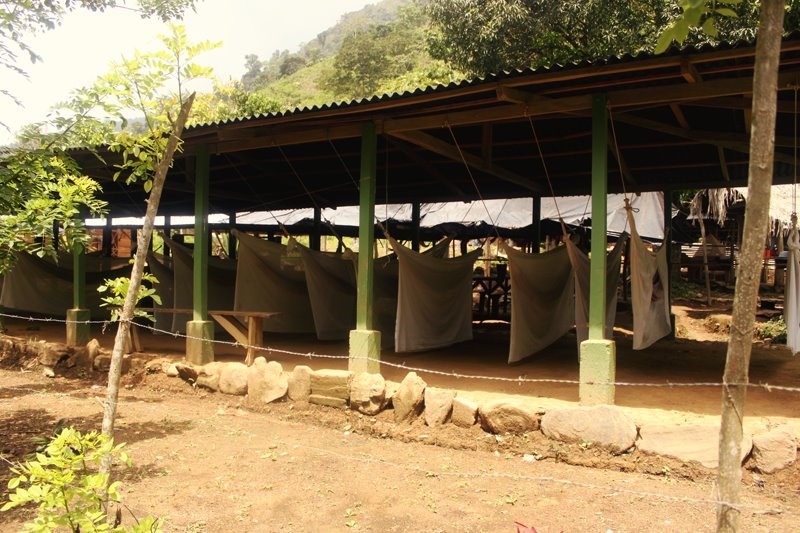 So we were pretty restless and excited – especially from the cold, cold showers, so we decided to suit up (dress in every clean, warm, long sleeved clothing) so we were ‘safe’ from mosquitoes and play some pretty serious games – I went through a yellow mirror door, and I brought back….? (If anyone knows the answer to that, genius!) Eventually, after a few scary goodnight stories from Lubin (all involved snakes) we drifted off to (mainly) peaceful sleep (as much as hammocks allow) and made it till the morning.

If the dinner was anything to judge by – and it was – we were in for a pretty great breakfast. Boy, were we right! Eggs with fake bacon (facon) and toast, just what we needed before getting back in the (ick) wet clothes from yesterday – as it didn’t make any sense to put on clean ones, as we were just going to sweat like in a sauna in five minutes. And then we were off – just us and the jungle. 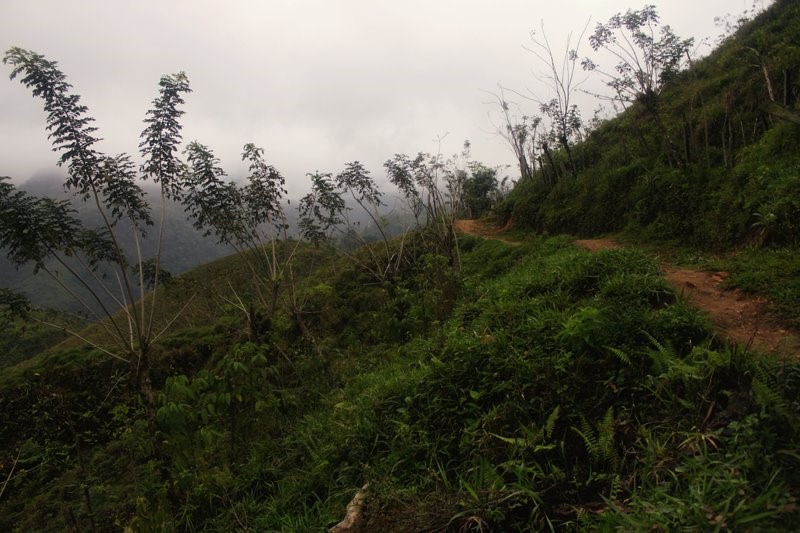 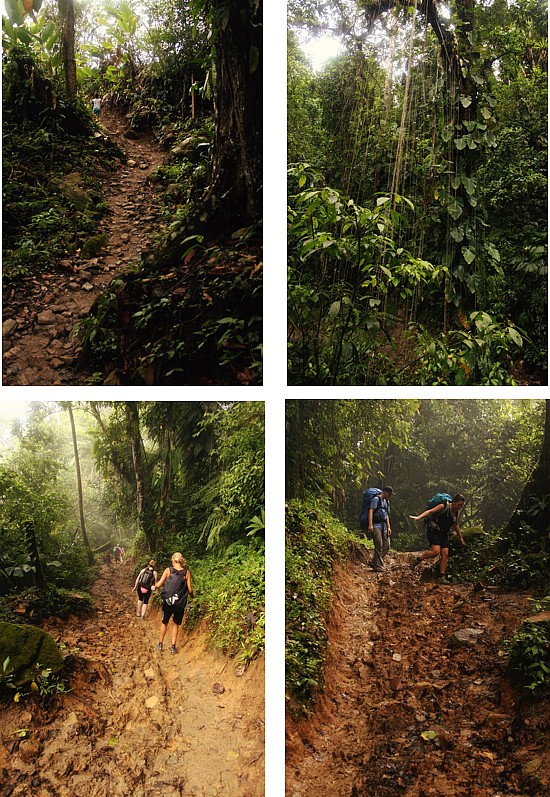 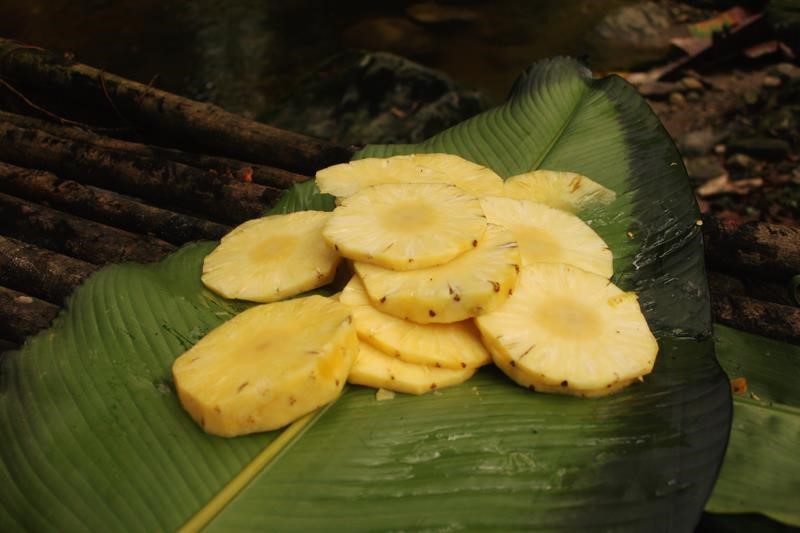 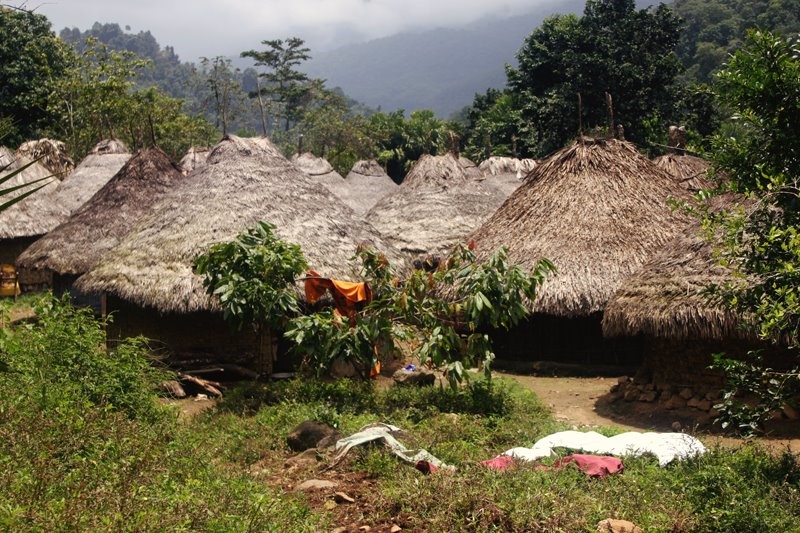 Kogi houses as we passed them by 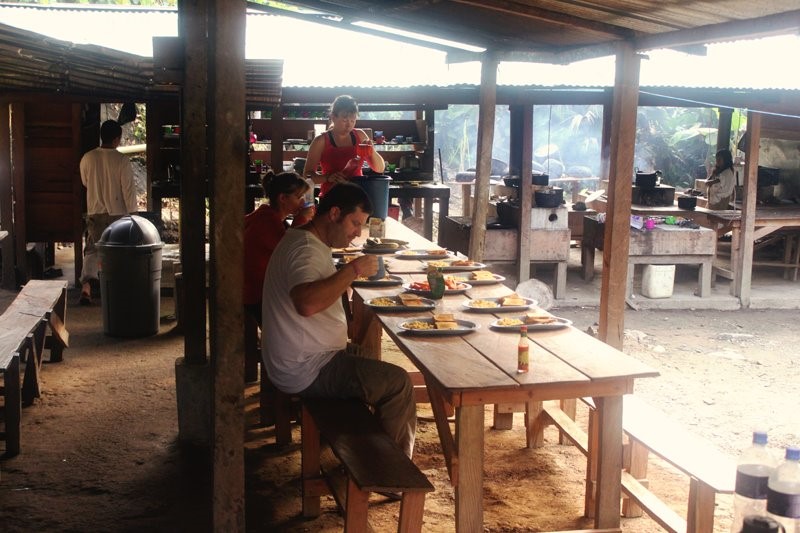 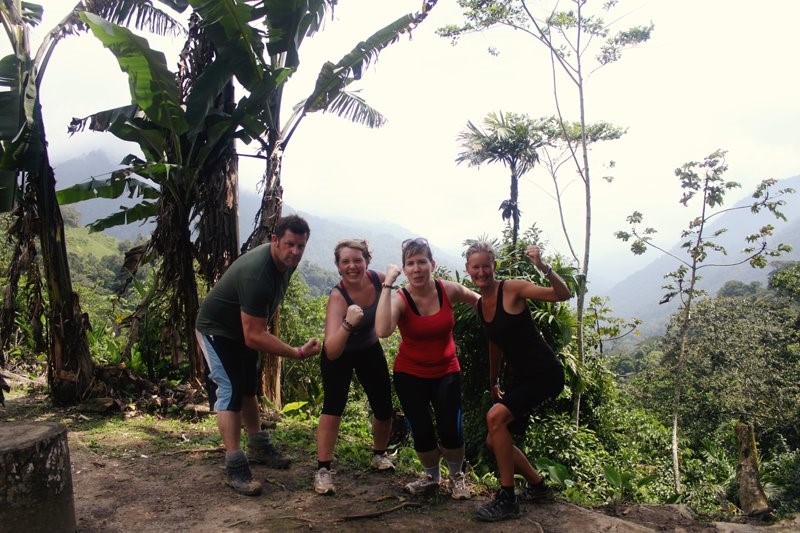 I think Kurt Vonnegut was on to something when he said – and so it goes. Jungle, camps, jungle, jungle, camps. We eventually made it to the camp just next to Ciudad Perdida, slept over and then made it to the actual site the next morning, well rested and prepared. We picked up two American ladies on the way who were too tired to go with their group, and they were pretty hilarious – both loved to sing, so at any given moment they would break into songs – just to give you an example, I was observing an ant trail and these two huge ants were walking alongside, clearly keeping the procession in order. I pointed it out to one of the ladies and said “clearly, that’s the sheriff.” And off she went. I shot the sheriff… but I didn’t shoot the deputy.” Oh well. 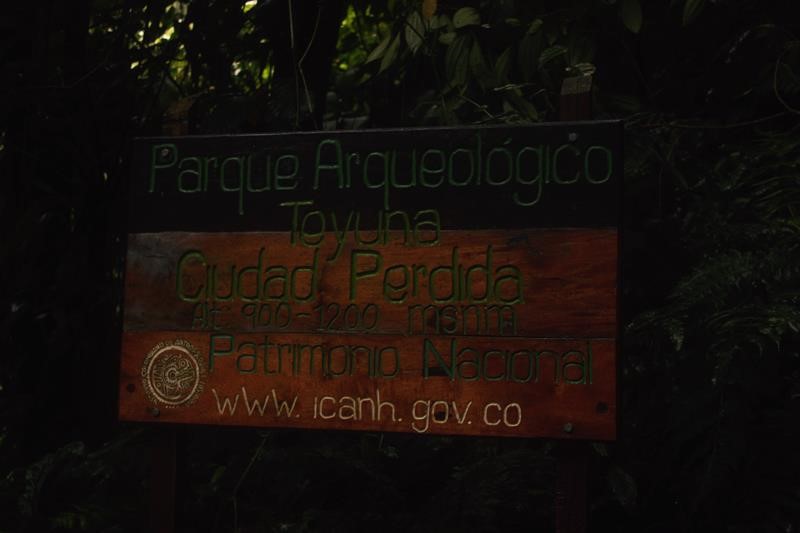 Ciudad Perdida is just what the name suggests – the lost city. It’s beautiful, haunted and mysterious, from the thousands (not really though my legs disagreed) wooden steps leading up to it, to the terraces where their houses used to stand. Along with mysterious inscriptions of rocks, that are supposedly maps (Lubin tried to explain it to us, but we just got more confused as he went on) and all the friendly soldiers we met it was truly a great experience. 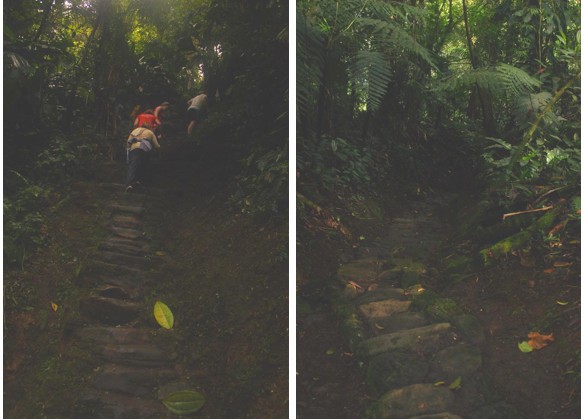 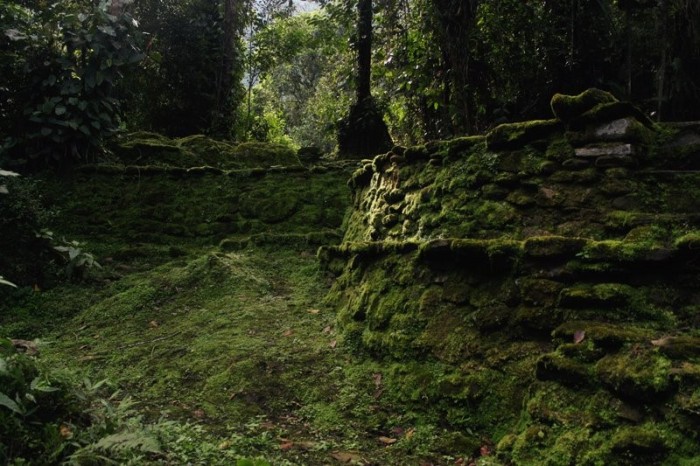 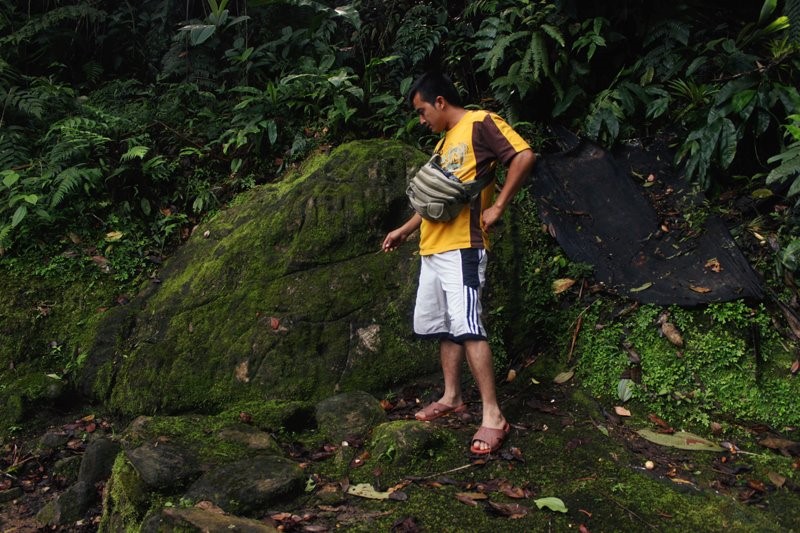 Lubin, trying to explain the map to us 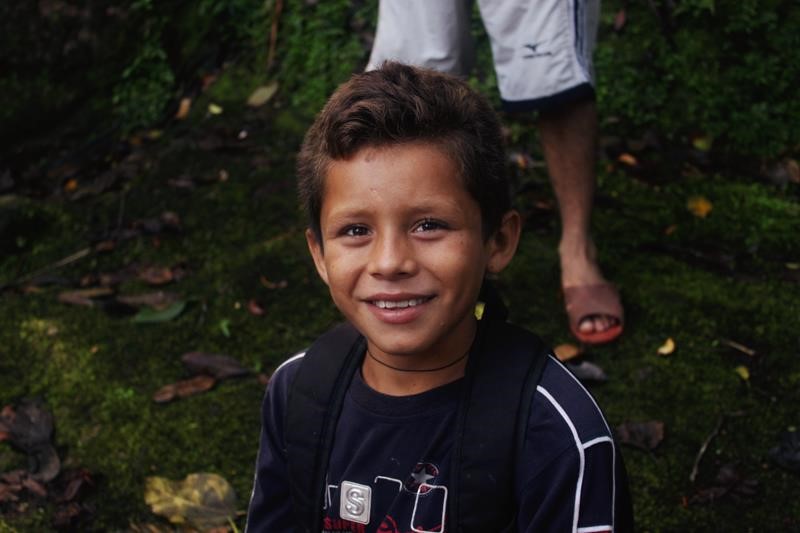 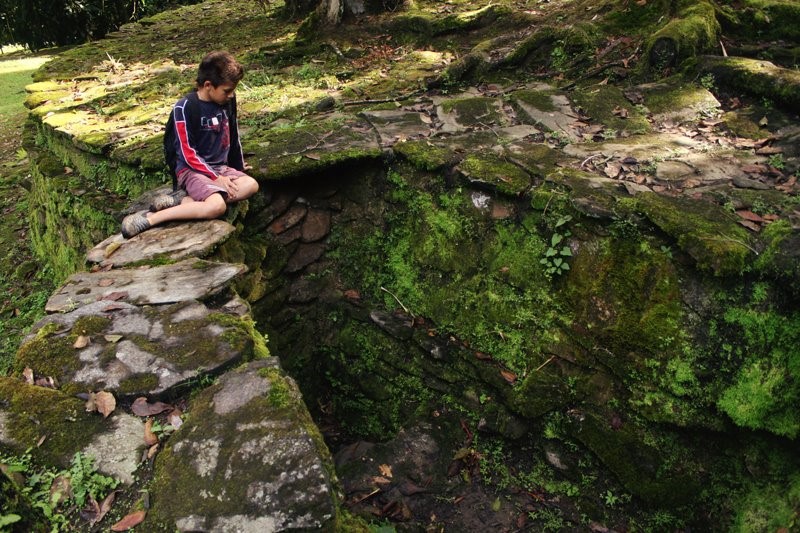 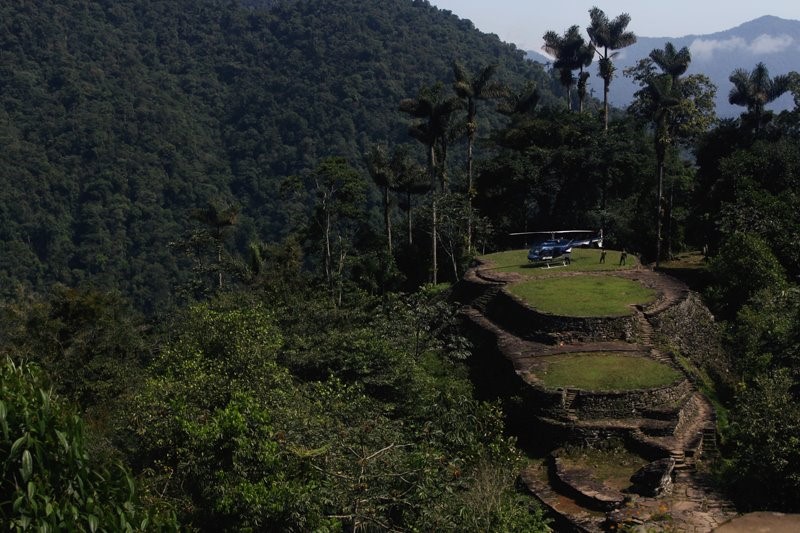 (just in case you thought I was making it up)