Rich coast. Definitely the right name for the beautiful and colourful country of Costa Rica. I have been lucky enough to spend few months in this amazing part of the world in Central America with my friends.

After landing in San Jose, the capital, we spent first night in one of the hostel in the city, then headed straight to the Caribbean coast next day. You might think that as soon as you land in this city, it will be tropically hot. But not really, as the city lies on the plateau and has lower temperatures that the rest parts of the country. I must admit that I felt a bit cold waiting on the bus to take me to the town of Limon.

The bus drive to Limon was a good four hours journey, where I was observing the first sights of the nature around me. After arriving to Limon, we took a local bus to Puerto Viejo, where we had organised a place to stay – our base camp for next few months. 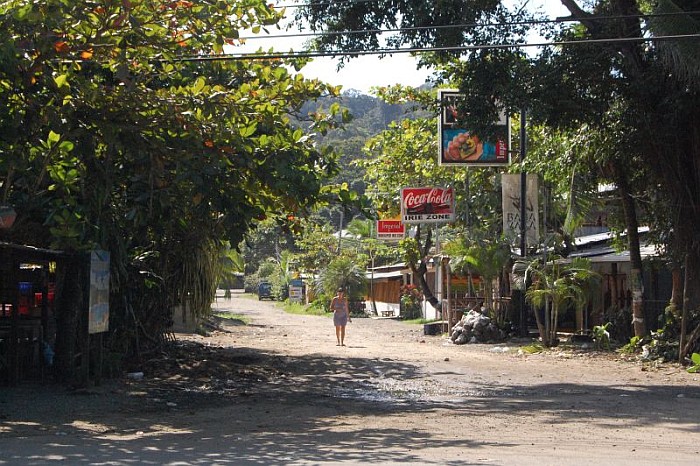 We slowly started to explore the little village of Puerto Viejo and believe me, after spending long time there, at the end I wished to stay there for ever! The village lies on the seaside, with its local Playa Negra beach, where locals spend their free time. The sand on this small beach is, as the name suggests, black, and thus even warmer as white sand to walk on. Burns your feet, watch out! 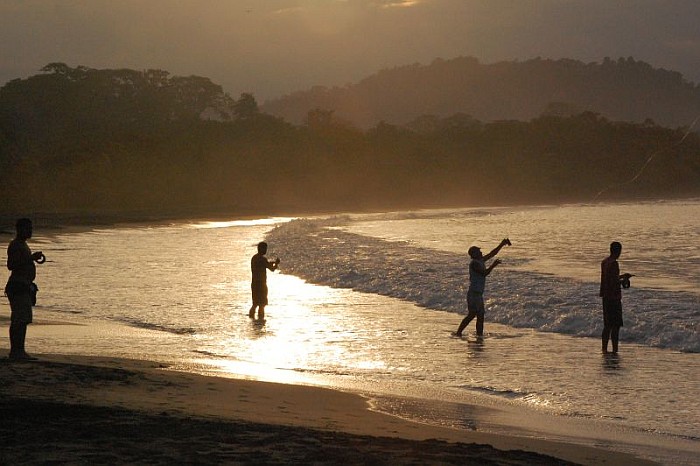 You can find all kinds of shops in the village, like the basic ‘supermercado’, few smaller shops, food stalls and small fruit and veggies stands on the corner, fisherman selling their daily catch on their corner. All you need is there, and I tried out most of the local, family-led small restaurants there. Some of them don’t look very nice and are poorly equipped, but the food you get there is absolutely delicious. A short stroll through the village offers more exciting places, like lovely small art-and-crafts shops with handmade souvenirs, and surf shops. 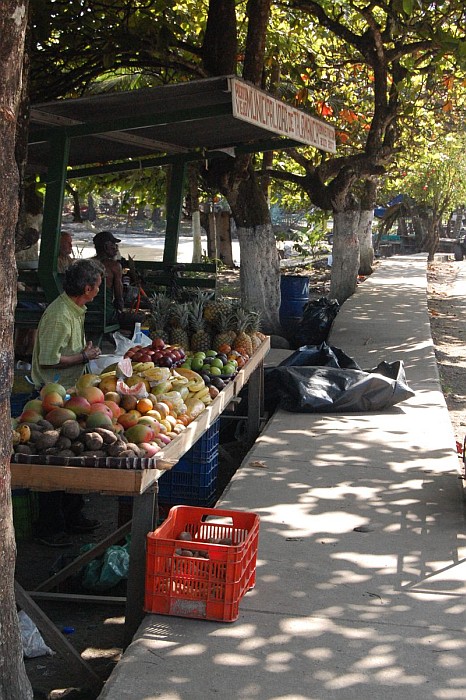 For your convenience, there is a laundry shop, bicycle&scooter rental, internet cafe (with air conditioning set to lowest, so I always took my cardigan not to catch the cold!), pharmacy and local doctor, specialised in pet bites treatments. Not that I have ever encountered a pet biting me. In general I felt very safe at all times in Costa Rica. Even though most of the country consists of jungle, the inhabited areas are usually on the coast line and the jungle creatures mostly stay in the jungle. 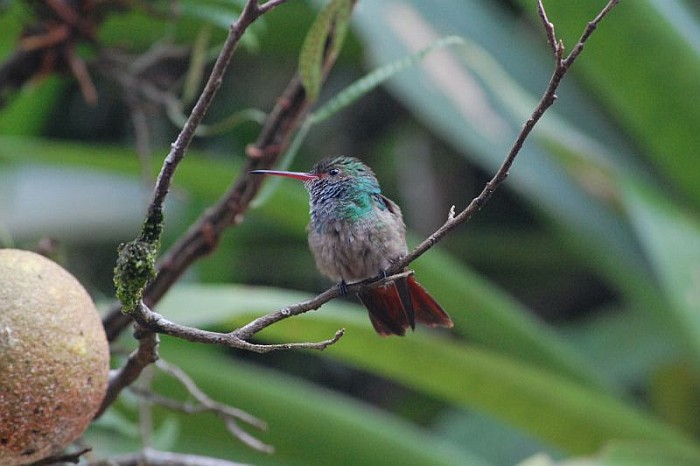 The biggest nuisance were actually the mosquitos and sand flies, which greeted me every morning as soon as I crawled out of my cosy bed with thick mosquito net. By the time I was sitting down to breakfast I could already count ten to twenty bites on my hands and legs. Oh, and I won’t forget the bat that gave me and my friends a warm welcome when we arrived to the room we have rented. As it happened we realised the room wasn’t rented out for some period, and made it a perfect home for one bat, whom probably we surprised as we moved in. In the evenings, he kept coming back to the room through open window in the bathroom, letting us know this is his room, not ours. It wasn’t before we had put up a mosquito net on the window to prevent the little fellow to paying us evening visits. 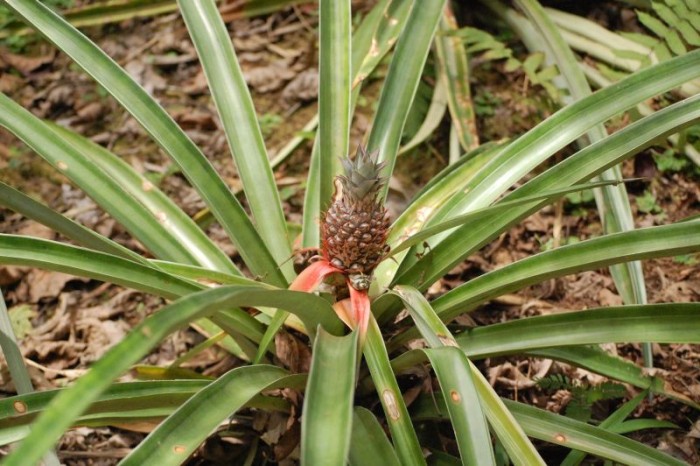 All other encounters with animals in Costa Rica were pleasant – I enjoyed seeing sloths on the branches high up on the trees, while taking a hike to a nearby lonely sand beach. Or listening to loud roars of howler monkeys, coming from the jungle that spreads behind the village. The sounds of the nature are luscious, you hear so many birds singing their distinct melodies and can’t resist but to whistle alongside. 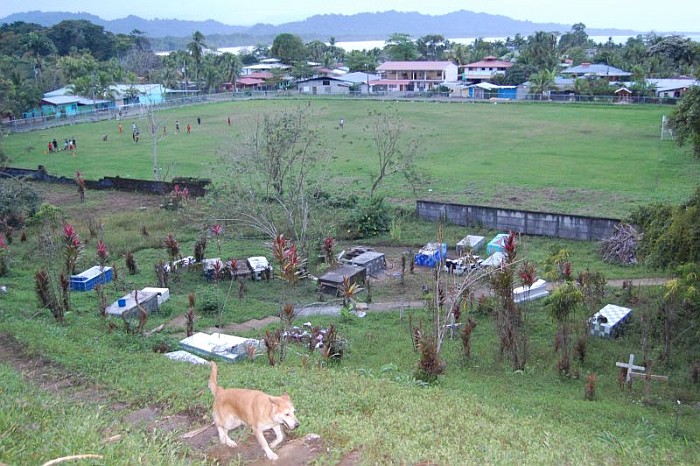 It is also very common to see many strain dogs on the streets, and at the house where we were staying they had two dogs running around freely – Coco, and her pup Popaye. It is a bit rough for the dogs there though, and after the puppy Popeye started to follow us to the village and around, one day he didn’t come back -it could be that he got involved in a dog fight, and didn’t make it being a puppy.

Spending time in Puerto Viejo has a lot to offer, and you meet quite few fellow travellers and tourists in this village, many of them coming there to surf. There are few nice beaches near that area, with solid waves and also calmer ones for the beginners. Other activities include snorkelling or a trip to the jungle. 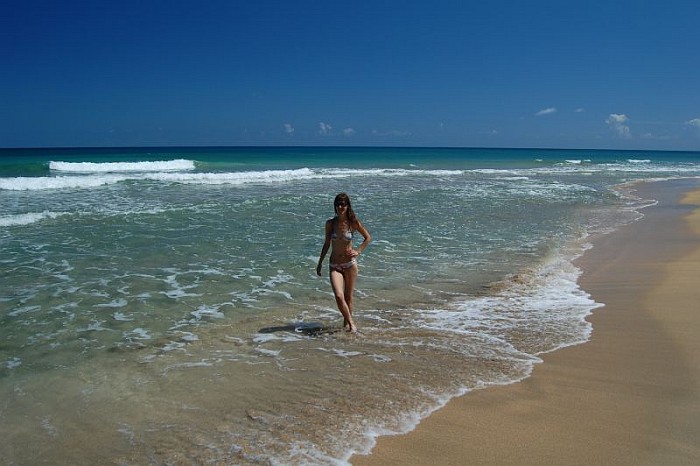 Me and my friends decided to go on a day-long jungle walk with the local guide Jula, a German chap living in Costa Rica for years now. That was one of the best decisions, as I enjoyed the day to the fullest, wandering on the small paths through the colourful and echoing forest. Jula is full of knowledge about the flora and fauna in the forest, and it was interesting to see which plants are used for all kinds of pharmaceutical products. If you have this knowledge, you can always prepare the medicine for yourself, avoiding pills. Most of local population still use their inherited knowledge of preparing the medicines by themselves. On one trip I remember I started feeling nauseous after arriving to the hostel, and the kind employee at the hostel prepared a tea for me, which he assured will make me feel better, and indeed it has! He went to the forest, got few leaves, added some other ingredients, and voila, natural medicine at its best! 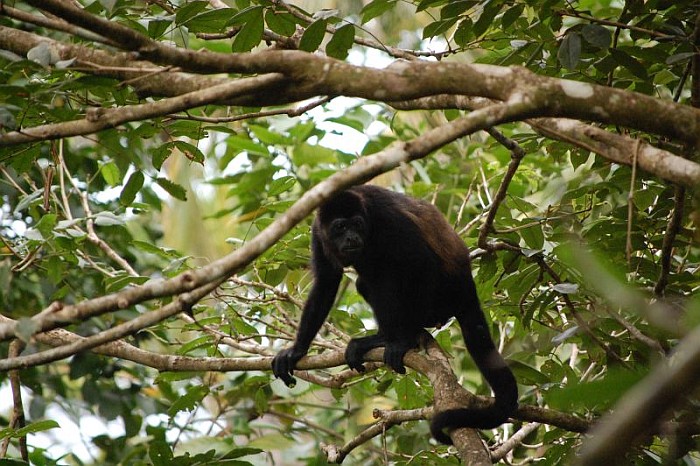 To continue the adventure of our eight hour trip to the jungle – Jula knew all the secret spots where exotic animals are hiding, and has showed us different species of spiders, snakes, butterflies etc. We took a little break for snacks beside a small pond in the middle of forest, and we observed the baby alligator few meters away from us. That was quite an experience for me! At the end of this day trip we stopped at a abandoned cabin and stopped for a rest and some energy boosters. Jula cut the sugar cane stick with his machete for us and I tried it for the first time – as you bite into this fibrous stem, you suck out the most pure sugar juice, very sweet but great taste. He also picked few coconuts and cut opened them, so we could refresh with one of the most healthiest and nutritious liquids, the coconut water. 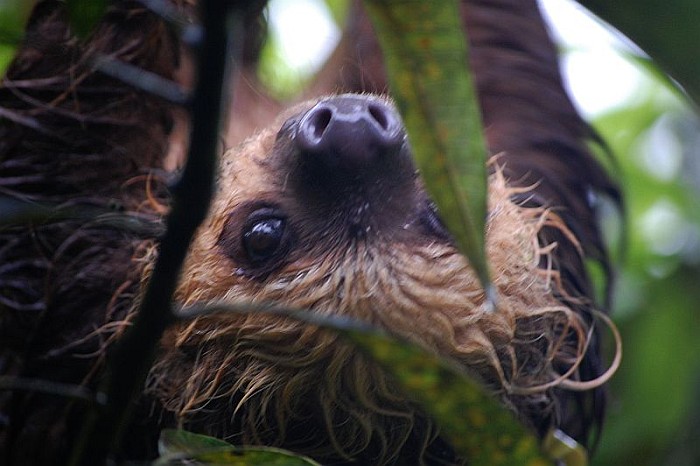 Puerto Viejo is also a great starting point for numerous trips around this area. The ones to mention would be visiting one of the few sloth sanctuaries in the world, Aviarios sanctuary in Cahuita. They take care of the abandoned or injured sloths and are home to quite few of these fellas. The tour in the sanctuary is very educational, and you get to see baby sloths being fed, and even cuddle them a bit. The sanctuary is based next to a small river, and the tour includes a short boat trip on that river, which was a great experience once again. I got to see other animals that are inhabiting the riverside and I didn’t see before, like for example the Jesus Lizzard – yes that is the one that runs on the surface of the water, even though I didn’t see that in the action. Again, we have passed a hidden eyes of something hiding few meters away from the boat, and the driver confirmed if was an alligator! But he assured we were save, and indeed nothing dangerous happened. 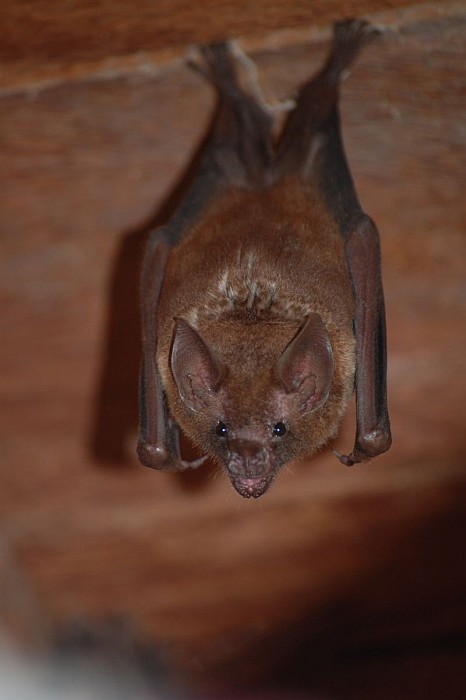 Before leaving Costa Rica I decided to visit the remote city of Bribri in the canton of Talamanca, only about an hour bus drive from Puerto Viejo. Bribri is an indigenous group of Costa Rican people. They live a very simple tribal way of life, but in the capital city of Bribri of course with modern improvements. They speak their own ancient Bribri language and also Spanish. Most of them live in the mountain areas around Bribri city and spreading to Panama across the border. It was a great pleasure to get to know more about the way they live, in clans, isolated from other population and depending on their own agriculture produce.

In general, my visit to Costa Rica has been a fulfilling adventure, and I can’t possibly mention all the positive encounters on the way around the country in one article. But Ticos and Ticas (these are the names for Costa Rican inhabitants) will stay in my heart as positive and energetic people. I hope to return to this place in the world once again, but who knows, because there is so much more for me to explore!