Grand Hotel Union is a building you’ll want to see even if you have no intention of staying in the four-star hotel or visiting the Union café. It was built between 1903 and 1905 in answer to the devastation caused by the earthquake of 1895. At the time it was one of the largest buildings in Ljubljana and the city’s first modern hotel, its facilities having included a bowling alley, a large concert halls and multiple salons. Additionally, Union has always had central heating, a telephone and a lift, which were all a rarity back in the beginning of the 20th century. Grand Hotel Union’s past guests include Bill and Hillary Clinton, Dalai Lama and Queen Elizabeth II. Since its creation the hotel has been renovated twice but the building retains the qualities of the Vienna secession style it was originally built in. There are two dominant architectural styles in Ljubljana, Baroque and Art Nouveau. Grand Union Hotel is located right where the former ends and the latter begins. Outwardly, Union is certainly one of the most beautiful of Ljubljana hotels. 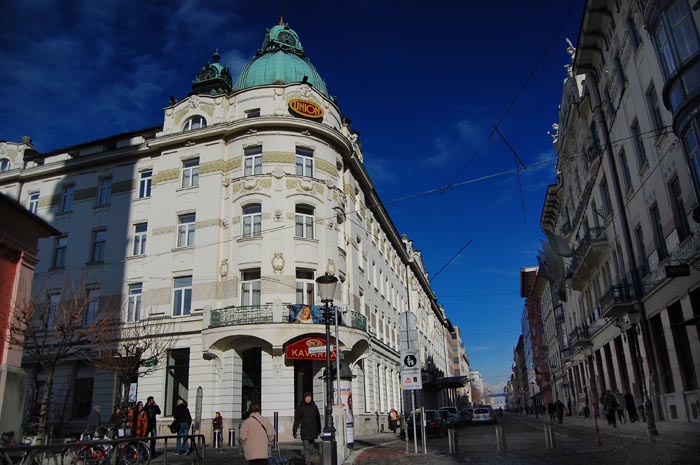 Grand Hotel Union is one of the most well known Ljubljana hotels.

Grand Hotel Union overlooks the Cooperative Business Bank building, which many have named the most beautiful building in Ljubljana. Like Union, this building too is made in Art Nouveau (specifically, the Vienna Secession style) but the building’s architect Ivan Vurnik went a step further in the bold facade, the staircase and the interior wall paintings. The facade ornaments bear the Slovenian national colours, white, blue and red. 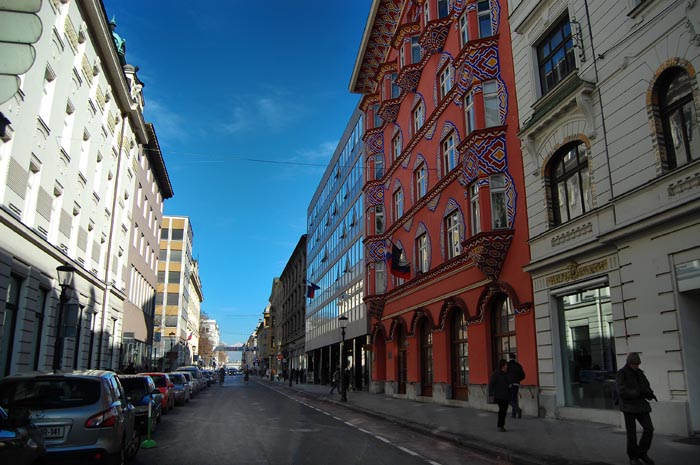 The Cooperative Business Bank Building is right next to Union, one of Ljubljana hotels.

City Hotel is one of Ljubljana’s oldest hotels. In the place where City stand today, Hotel Štrukelj opened in 1903. The hotel was one of the few that remained opened even during World War II. It changed ownership a few times, at last landing in the hands of the Krajc family, one of whom is currently a permanent resident of the hotel. 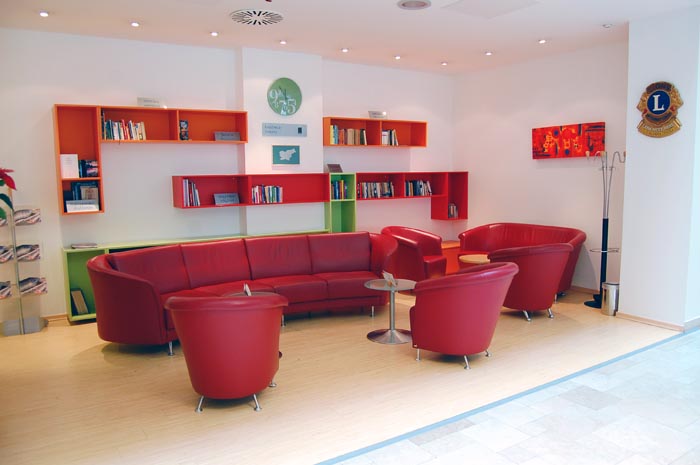 The library in one of Ljubljana hotels, City Hotel 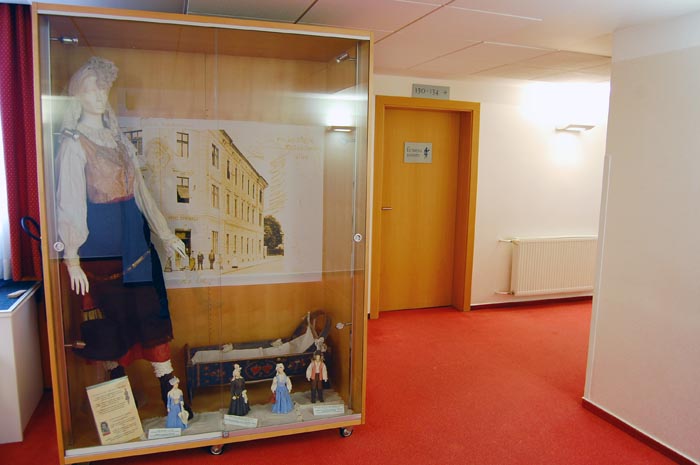 City Hotel is in close proximity to Prešeren Square and just a few steps away from Miklošič Park, the only Art Nouveau park in Ljubljana. The park borders on the Palace of Justice.

Visitors to Ljubljana might often overlook BTC City, as it is not as fascinating as the old city centre but for lovers of shopping, BTC might be worth a look. The beginnings of BTC marks the creation of a company called Central Warehouses, established in 1954. After expanding their activities, the company soon became known as Public Warehouses and was at one point the largest goods and transport centre in Yugoslavia. In 1990 the centre became known as Ljubljana Goods and Transport Centre, which in Slovenian produces the initials BTC. Since then the warehouses no longer serve their original purpose but are instead home to many shops. With its square footage exceeding 250,000, BTC City is one of the largest shopping complexes in Europe.The complex today includes CityPark (the main shopping mall), 16 smaller shopping malls, a cinema (as well as a 3D one), a casino, a bowling center, a spa and water park, some high rise office buildings (BTC’s Crystal Palace currently being the tallest building in Slovenia) and a newly built Plaza Hotel. Due to its proximity to BTC, the four-star Plaza Hotel is perhaps best suited for those traveling on business.

With past guests such as Agatha Christie and Bob Dylan, Hotel Lev is the only five-star hotel in Ljubljana. Lev is part of the Union Hotels group, along with Grand Hotel Union. Known worldwide, Hotel Lev caters to those traveling on business, as it offers several halls for meetings, conferences, congresses and various other social events. The hotel was built in 1964, in place of the then popular restaurant Pri Levu. Honoring the restaurant, it kept its name, Lev (Lion). 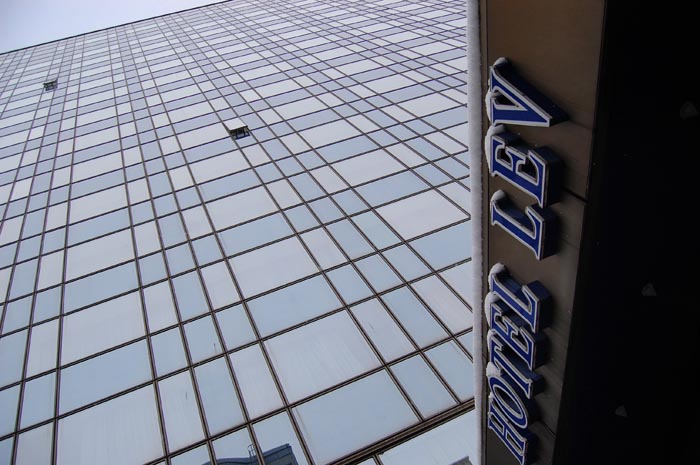 Hotel Lev, the only one of Ljubljana hotels to have five stars

Hotel Lev is situated about a 5 minute walk away from Tivoli Park, Tivoli Hall and the Tivoli indoor pool. Two indoor sport arenas comprise the Tivoli Hall. One of the two arenas primarily hosts basketball games and has a sitting capacity of 4050 people, with the other arena hosting hockey games and sitting roughly 4000 people. Tivoli is home to both the Olimpija basketball and hockey clubs. Both arenas accept a substantially larger number of visitors when hosting concerts, musicals or other shows. Past musicians Tivoli Hall has hosted include Queen, Motörhead, Iron Maiden, The Cure, Nirvana, David Bowie, Green Day, Anastacia, P!nk, the Arctic Monkeys and others. 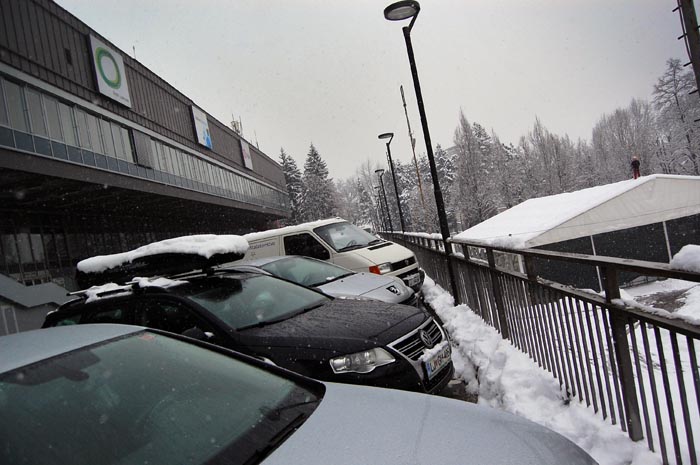 Tivoli Hall and a random man on the roof