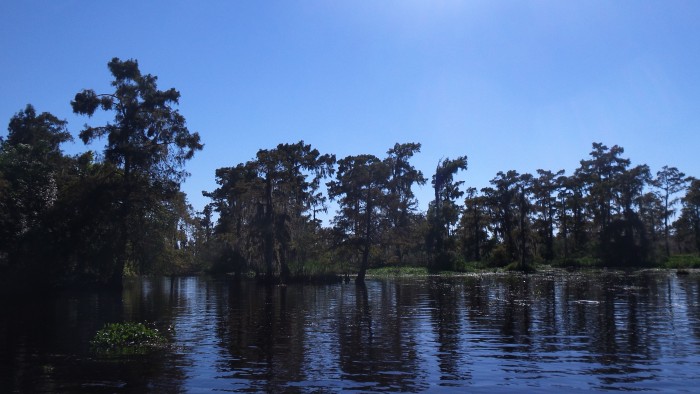 New Orleans was the first stop on the 3 week long road trip a friend and I took but I dare say that this was my favourite. The city has an intriguing history and notable Spanish and French influences, which result in picaresque buildings, a distinct Creole culture, amazing cuisine and it’s also a city that just loves to party. It is also the birthplace of jazz and the place where voodoo was first introduced into the US.

When we left the airport and boarded the shuttle bus, we experienced our very first culture shock – the air-conditioning craze. Although the temperatures outside at 9pm were at a comfortable 23°C, inside the air-conditioning was on full blast. During the ride to the hotel, the driver, unfazed by the cold and wearing a T-shirt and shorts, explained two things to us shivering tourists. Number 1, that we have to try the famous New Orleans gumbo and 2, tipping was absolutely mandatory when going to restaurants and bars – 15% minimum! He wouldn’t even recommend any of his favourite places until we swore that we were going to be generous tippers, explaining that the waiters get paid a measly 2.3 dollars per hour.

After breakfast the following day we went for a stroll around the city (the French Quarter, to be precise, as venturing outside this area isn’t particularly recommended for tourists) to the banks of the mighty Mississippi river and back to the St. Louis Cathedral, one of the city’s most notable landmarks. We soon discovered that it was the day of a very important football match (and I mean the real football, not the sissy European kind) so the entire city was buzzing with excitement.

After a few hours we returned to the hotel, having booked a swamp tour. The bus picked us up and then we drove for about 45 minutes, during which time the bus driver enthusiastically explained how he met two Italian women, who nonchalantly told him that they mostly ate pizza during their stay in the “Big Easy”. He was absolutely appalled at their statement and gave us a very excited lecture about all the famous and unique foods New Orleans has to offer: gumbo, jambalaya, fried shrimp, the muffuletta sandwich and so much more. “You can have pizza anywhere,” he exclaimed in frustration! 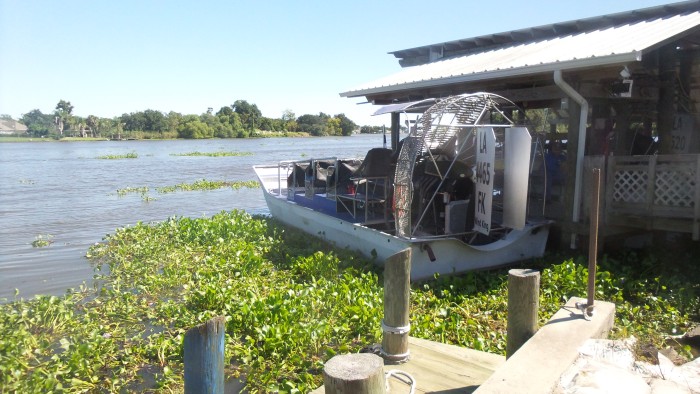 When we arrived in Lafitte, our destination, the weather was sunny and gorgeous. One of the most unusual things I saw were all those trees with strange cobweb-like things hanging from them. This odd plant is actually called the Spanish moss (the French used to call it the Spanish beard, while the Spanish, in turn, called it French hair). The bus driver explained that people used this moss to stuff their mattresses and pillows and Henry Ford even supposedly used it as padding for car seats. Then we boarded the airboat and ventured into the swamp, driving around for two hours. We even got to see alligators and threw some marshmallows into the water. *Technically, you’re not allowed to feed the alligators, only fish and other wildlife. But if an alligator just so happens to swim by and snatch the marshmallow, who are you to stop him? (Apparently they’re fond of Cheetos as well.)

On our way back the bus driver was so excited that their football team won in overtime, that he offered to take us anywhere we wanted to go in the French Quarter and, inspired by his speech, we asked him to drop us off at a good gumbo place. We weren’t disappointed; the shrimp gumbo was absolutely mouth-watering. I tried the jambalaya as well (a kind of risotto), but it could not compare to the gumbo. I still have dreams about it. 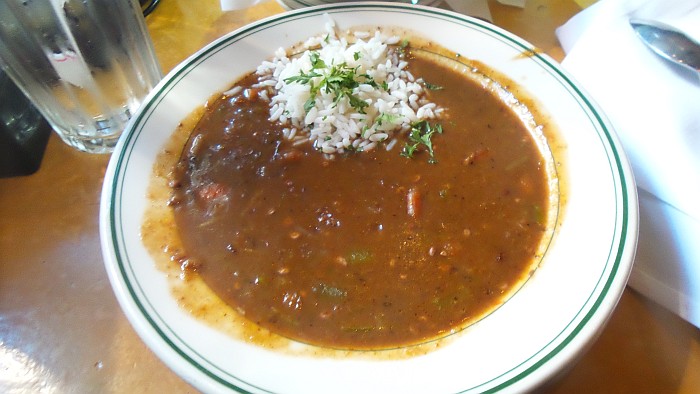 After the hearty meal we visited Pat O’Brien’s bar with duelling pianos, where two pianists played songs on request, interchangeably or together. All you had to do was write the song down on a napkin, enclose a tip and voila, they’d play your song. What a fun a unique experience it was and the atmosphere was just so relaxed and friendly. Alongside we ordered another New Orleans special, the Hurricane cocktail, which is made of rum, some tropical juice and topped off with more rum.

Upon hearing “New Orleans”, people immediately think of the devastating hurricane Katrina that ravaged the city in 2005 and many people have asked me if any after-effects were still visible to this day. Well, yes and no. Yes, there are some suburban areas that still lie in ruins and are yet to be rebuilt (if you’re visiting and are curious about this, there are Katrina tours available). And no, the French Quarter where we spent our time was relatively unscathed, because it lies slightly higher than the rest of New Orleans.

The next day we visited the Louis Armstrong Park (remember, New Orleans and jazz go hand in hand) and the famous Saint Louis Cemetery. The cemeteries in Louisiana are different than anywhere else; their dead are buried in above-ground tombs. In the past, locals stubbornly buried their dead in the ground, but because the entire area lies below ocean level, this meant that during heavy rains the coffins were pushed up to the surface each time (not a pleasant sight, I would imagine). There were various tombs, some large, others small, some brand new and bright white, while others were reduced to a pile of bricks. But the most notable tomb is that of Marie Laveau (you instantly recognize it, because it’s decorated with pearls and ornaments and the X markings cover almost the entire tomb).Marie Laveau was a famous voodoo priestess and tourists often (used to) visit her grave and draw these X marks. It is said that if you draw an X, turn around three times, knock on the tomb and yell out your wish, it will be granted. However that is no longer allowed because a) marking any tomb with an X is a federal crime, b) it’s disrespectful to the dead and c) since 2015 you can only visit the cemetery in guided groups. Fun fact: Nicolas Cage bought an empty tomb here for his final resting place. 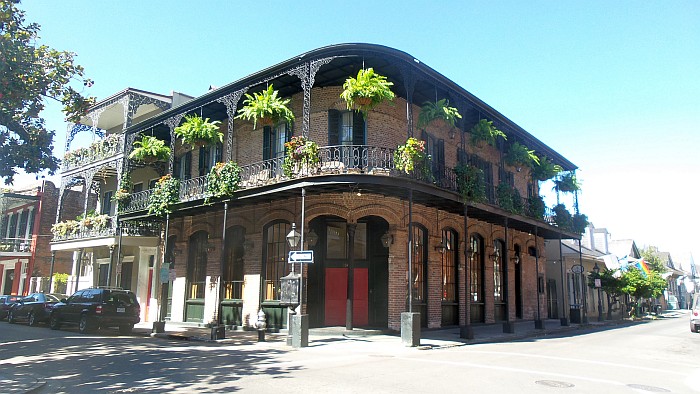 In the afternoon we booked a “free” walking tour around the French quarter. Why the inverted commas? Well, it is technically free, there’s no admission, but you are expected to tip your tour guide after. Our guide was a perky, energetic Australian, who took us for a two hour long walk around the French Quarter in the scorching afternoon heat and she had a lot of interesting tidbits to share with us. So I would definitely recommend this type of tour, if you have the chance. It was really informative, fun, interesting and oh so tiring. And you can pay the tour guide any sort of amount you want or can afford.

One of the things our guide mentioned was the famous jazz club called the Preservation Hall. When you stand on the street and see the outside of this building, you wouldn’t think twice about it. It just looks like a regular run down house, nothing at all special about it. But it is special and it has hosted some of the greatest artists in jazz music history and it is famous for hosting unique and intimate acoustic jazz concerts. Three performances per night, seven days a week. But beware, if you want in, come early, because it’s always packed and the waiting line is on average three hours long. 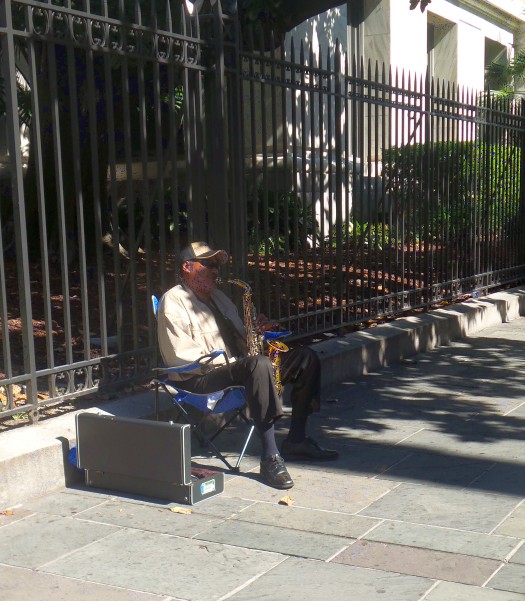 The next morning we said goodbye to the beautiful, historic and friendly Crescent City and, slowly leaving swampy Louisiana behind, drove towards our next destination, Fort Worth, Texas.