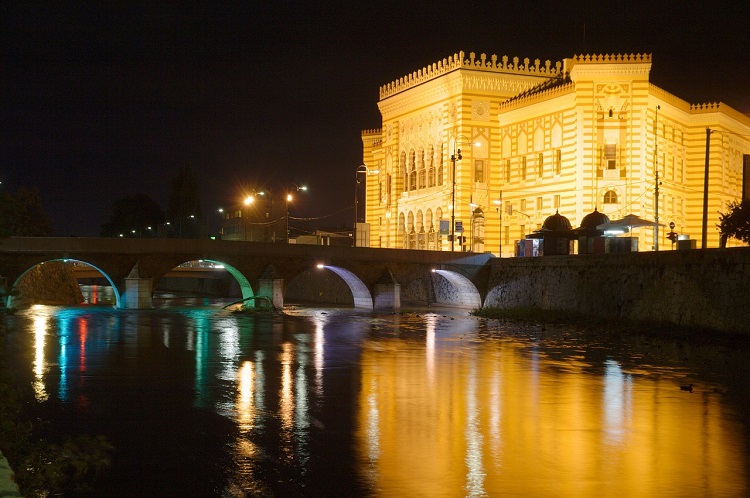 Sarajevo is the capital of Bosnia and Herzegovina, as well as the largest city in the state, as well as the country’s largest urban, cultural and economic center. It is located in the valley, on the coast of river Miljacka which passes through almost whole city, and devides it in two parts, and it is surrounded by few Olympic mountains: Jahorina, Igman, Bjelašnica, Trebević and Treskavica.

A few cities in the world can offer such a great history story like Sarajevo, but the story about the Sarajevo history must be told from the beginning.

How it all began?

Sarajevo has originated because of the culture mixture of the East and the West, and as such has become a city of coexistance and tolerance. Almost 4000 years ago, the area of Sarajevo has been already situated, and there is a  historic and scientific evidence of that fact. The settlement named Butmir is the most known neolitic antient place of civilisation on the whole teritory of Balkans, and it is actually a part of Sarajevo, that exists even today. The inhabitants that were living there were cattlemen, hunters or farmers, and they’ve had great crafting skills. But that culture disappears at the beginning of second millenium. The settlement of Butmir, was then inhabited by Illyrians, who lived in this city for a very long time. Their settlements were later found in other Sarajevo parts like Soukbunar, Debelo brdo, Zlatište and Kotorc. First traces in written Sarajevo history of the city as it is today, have appeared in the piece written by the Byzantine emperor Constantin II Porfirogenet.

The foundation of Sarajevo, was laid in 1462, with the appearence of Ottomans, who have been living here for the next 415 years. To be more exact, the founder of Sarajevo is considered to be Isa bey Ishaković, bosnian bey and army general. 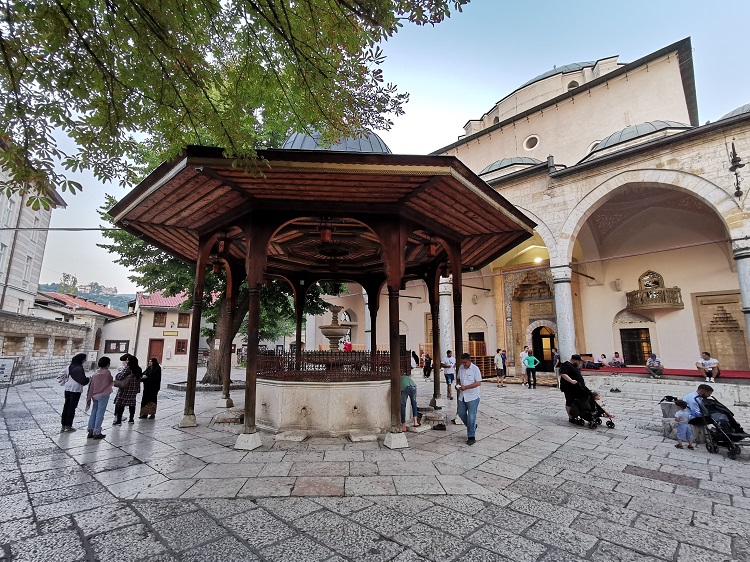 From 1440 – 1462 he set the foundation of modern day Sarajevo, by building a mosque at the place where today is places Careve mosque, turkish baths, wooden bridges and many other things.

The Ottomas have continued to build and develop Sarajevo so quickly, that by 16th century, the city has been one of the largest, richest and the most beautiful cities of the whole Ottoman empire.

As Sarajevo has been built by the emperors from the East, it has adopted the contures of oriental city. The appearance of the city center has not lost its identity even today. It is important to mentiotion, that during the time of Ottomans, beside mosques, city had its churches, one Catholic and one Orthodox, and two synagogues. After the Ottoman empire begun to weaken, Bosnia was occupated and anexed to Austro- Hungarian monarch, which ruled from 1878. – 1918. The presence of european culture and architecture can be seen in the city even today, through the buildings that were built in west-european architecuture styles, villas, palaces and other buildings. In the Sarajevo history, well known fact is that it was the first European city that had a tram as a mean od transport.Today, the tram along with the buses and trolleybuses, is the main mean of transport around the city. In Sarajevo history it has also been known for the assassination of the heir to the Austro- Hungarian throne France Ferdinand and his wife Sophia Hohenberg. The assassination has been considered as the immediate cause of the World War I. 20th century was a time when Bosnia, and its capital Sarajevo, have been a part of structer called Yugoslavia, which lasted until 1991.

Sarajevo is an Olympic city, which is probably one of the most known and most important facts of its modern Sarajevo history. The 14th Winter Olympic Games were held in 1984.and during that time, Sarajevo has been a touristic center. The 14th Olympic games were held from 8th to 19th February.There were 1272 contestant from 49 countries, that were competing in six different sports. The journey of Olyimpic torch has started in Olympia, abnd the torch afterwards arrived to Croatian city of Dubrovnik. One out of two original torches today is located on a private property in Slovenia. Former president of Internatioal Olympic Commettee, Juan Antonio Samaranch, told that 14th Winter Olympic games were the best ever orginased Olyimpics in the history of Olympic games. Sarajevo has become a part of little Olympic cities family.

The official mascot of 1984 Olympic games was Vučko. Before Vučko has been officialy selected, the readers of yugoslovenian newspapers have been asked to pick a mascot out of 6 finalists. With the majority of votes, they’ ve picked Vučko, a little wolf, who was designed by illustrator and designer Jože Trobes. Other finalists were squirle, lamb, mountain goat, porcupine and a ball of snow. After the Olympics, an event that marked  the Sarajevo history, Vučko became a symbol of the city, and it is its symbol even today. In short animated movies, that were showed before the broadcasts of competiton, Vučko was presented as clumsy but loveable sport guy, who was not that talented. The singer Zdravko Čolić lent him his voice.

8 years after the Olympics, all eyes were again looking to Sarajevo. This time not because of anything good. The city was under the seige for 1425 days. People who could not understand what Sarajevo represents, pulled out their guns and pointed all their hatred towards the city. But, as many times before, Sarajevo stood, lived and overcame all its enemies. Like a Fenix, the city has risen from the ashes and defended the its other name “Small Jerusalem.” However, many people died, many families have lost their parents, spouses, children. This event in the Sarajevo history left its marks, that were still visible today. 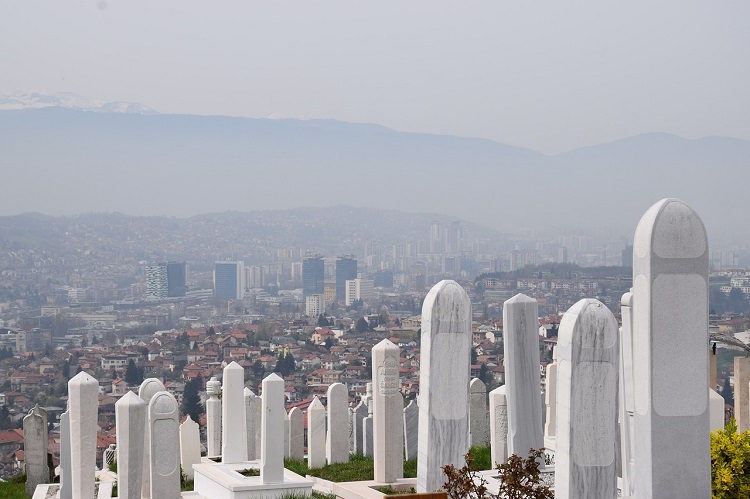 Many people who were in the army suffer from diseases like PTSD, and other mental disorders. Many children who were born during the war, suffer from different illneses. People were hideing, running out of the city and country…some of them never returned because they’ve found better life somewhere else. In some parts of Sarajevo, the remains of war are still visible, on the buildings, on the pavemntes… there are many monuments dedicated to people or children who died during the siege.

Sarajevo has a number of national theater houses, museums, culture institutions, and it is very important place on a culture map on european continent. Each year, this city that lies on river Miljacka is host of great number of culture festivals of international character.

The most important is Sarajevo Film Festival which celebretated 25 years of existance during 2019.

October 27, 1995, was a very important date in the Sarajevo history, because it was the first time ever that this important festival was held. The city was occupated at the time, under constant bomb shelling and it seemed as if the festival was a kind of resistance, rather than a real film festival. But, the organisation, seriousnes and the quality of the first festival were the evidence of what it was really about.

During 12 days, festival introduced 37 movies from 15 states. Festival attracted 15000 viewers. The rewards were not given at the first festival.

Today, Sarajevo Film Festival is the main meeting place for authors and producers from the region and the world, and it is a spectacular place for exchange of information and ideas, as well as a chance to meet all the thing that film industry is offering now.

1. Sarajevo had public lighting in 1895
2. Sarajevo had water system before Vienna
3. First public toilette has been built n 1526. near Bey mosque
4. Bey’s mosque is the first mosque in the world with electric lighting
5. Gazi Husrev-bey’s library is the oldest public library in Bosnia and Herzegovina that works since it was first opened in 1537
6. First caffe shop in Sarajevo was opened in 16th century, immediately after the first caffe shop in Istanbul.
7. If you want to go skiing, you can do it in just half an hour, because all of the Olympic mountains are near the city.
8. The only period of time that the monument to army and civil victims of the World War II, named Eternity Fire, which was built in 1946., wasn’t burning was during the time of Sarajevo siege.
9. During the end of 19th and the beginning of 20th century Sarajevo has been one od the most modern cities of its time, because everything has been built according to valid standards.
10. The name Sarajevo origins from turkish coin saray ovasi, which means palace or the field around palace.

Sarajevo is and has always been a city that welcomes all of the travelers. With its many monuments, sites, and places to visit it is really a treat for every visitor.s