In order to feel the harsh cold of winter to our bones and for an adventurous welcoming to 2015 in another country, me and one of my friends from university, found ourselves at İstanbul Sabiha Gökçen airport waiting for our delayed flight to Moscow on 25th of December 2014. Four hours delay due to the snow and stormy weather conditions, we were still thinking if everyone who heard about our trip was right. Soon as the people who learned that we would be spending new year’s eve in Moscow, they came to us with all their prejudice and stereotypes about the city’s safety, cold weather and a lot of questions about what an earth were we thinking to do on our own in such a cold weather in Moscow. (Let me add that all the people who sounded negative about the city were the ones who never have been there.) In spite of all the comments we had to hear, we were so determined and excited about our trip.

When we arrived at Domodedovo International Airport, we didn’t know what is waiting for us out there except having two small cards of metro lines given us by a lady, saying that she won’t need them as she knows already  whom we met and talked during our awaiting back in İstanbul. When we arrived at the metro by the shuttle bus from airport, as a person who used metro only a few lines in Ankara ( capital of Turkey) and İzmir (another city which lies on west of Turkey), I was completely frozen by the virtue of the atmosphere within the metro and also the Cyrillic letters were all over the place, which looked totally “alien” to me. Finally, we could figure out our way and reached our stop. Under the heavy snow with the beautiful view at the night and the next morning, I was still feeling like it didn’t happen, as if we were still in a dream. 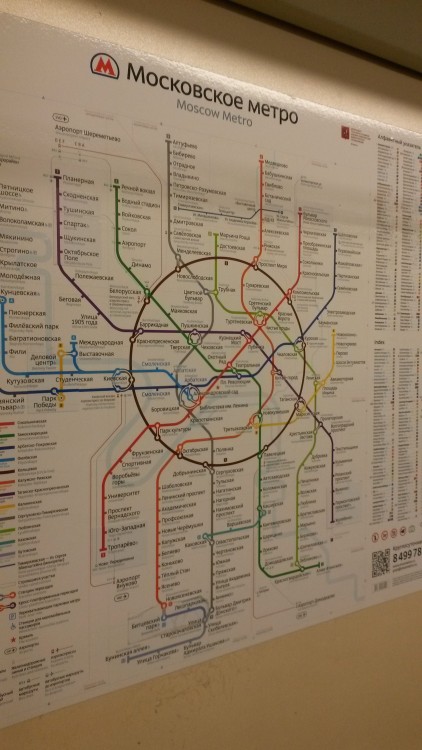 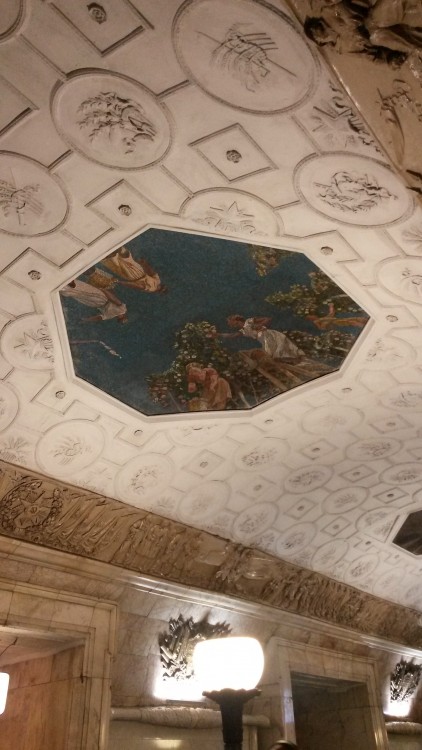 ceiling one of the stations of Moscow Metro

After the breakfast, we left our hostel  at  Presnensky, within 15 min. walking distance to Red Square and Moscow Kremlin, in order to catch Novodevichy Cemetery (at Sportsivaya Station) before it closed. We were both so excited that we were going to visit Nâzım Hikmet’s gravestone, a Turkish poet, novelist, playwright, who died in Moscow in 1963. On the way to the cemetery, buying one clove from a florist shop, we left our prays and notes at his gravestone, we did head back to Tretyakov State Gallery. Shiskin (1832-1898) has become one of my favourite artists after i saw his masterpieces. 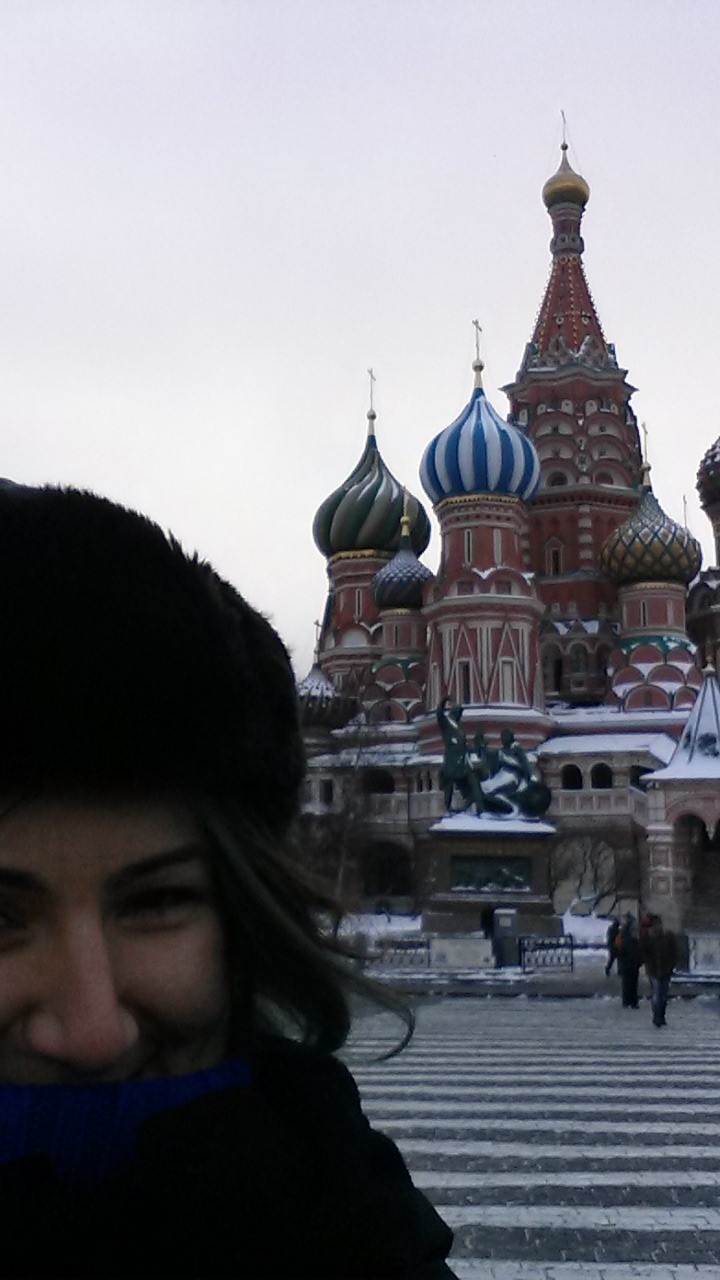 my selfie attempt in front of St. Basil’s Cathedral in Red Square 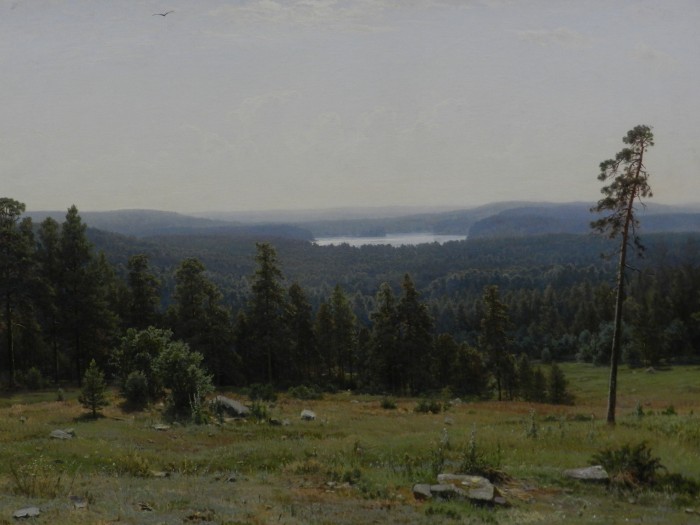 On the 3rd day of our arrival, early in the morning, we were supposed to meet a friend, Olga whom we met through couch-surfing, in front of Lenin’s Mausoleum. However we accidentally entered in the Kremlin instead. Still having some time, we walked around in the Kremlin, took some photos and looked at the detailed carved churches. Thanks to Olga’s company, we saw many places until the evening. First GUM (historical building used as shopping centre at Red Square), State History Museum next, having lunch at MyMy ( restaurant with some traditional meal), we continued the day walking in Arbatskaya street which pretty much looked like İstiklal Street in İstanbul. After that we went to Gorky Park and seeing the Moscow River frozen, took my breath away, it was  such cold that we couldn’t continue walking outside and had to give a break at a cafe inside the park. Leaving Olga with many gratitudes, I was feeling so happy for the day we had. 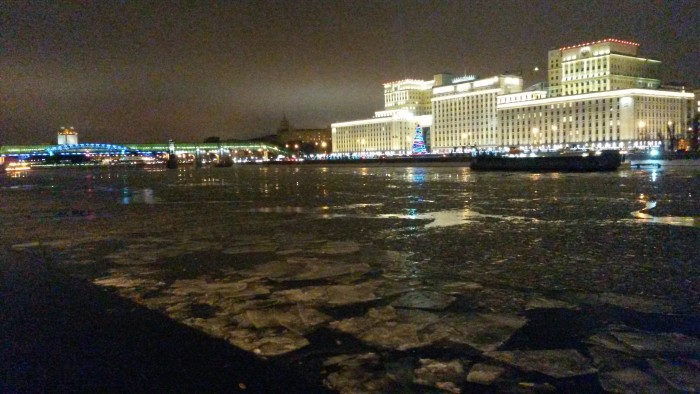 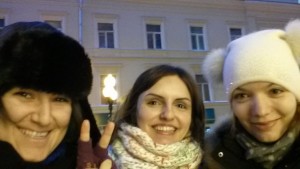 Me, Merve and Olga <3 at Arbatskaya Street on the way to Gorky park

On our last day in Moscow, after seeing Lenin’s Mummy (during weekend open between 10:00-13:00 free, taking photos was not allowed), and the eternal fire by the wall and the park outside the Kremlin, we went to Fallen Monument Park at Yakimanka District. Seeing many sculptures and statues within the snow and the weather was even colder than I could describe,however I totally felt warm inside thanks to all the art I’ve seen. 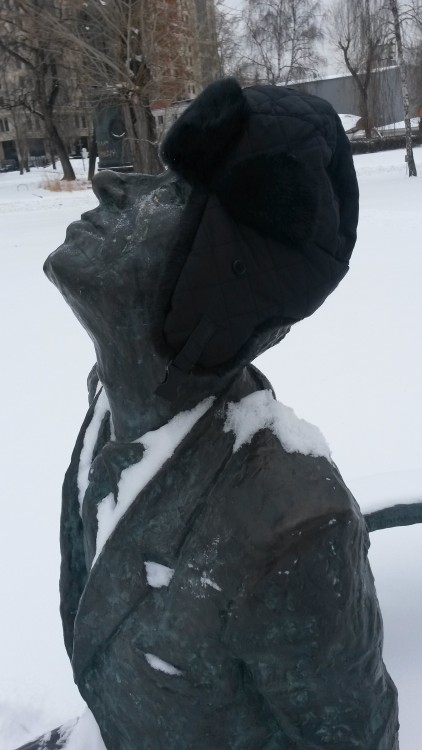 with my warming hat on G.V. Pototsky-Andrey Sakharov 2008 Bronze at Fallen Monuments Park

After we went to Pushkin State Museum of Fine Arts, just the opposite Cathedral of Christ the Saviour, we were ready for our next trip to Minsk. When we arrived the Belaruskaya Train Station, just ten minutes before our train left, when we showed our ticket to the people in front of us to be sure, a man helped us to find our train as we were obviously waiting at the wrong place but we didn’t know that. I will never forget the man who helped us diligently and run back to his train in rush.

Arriving Minsk, early in the morning, (already got used to late sunrise), I had the same feeling again just like in Moscow: rushing people, cold weather, order and discipline and somehow that mysterious air that I cannot describe. After spending 4 nights and 5 days in Minsk (visiting a couple of museums that I wanted to see, embracing the new year there) on Friday night (3rd of January), this time on my own, without my friend (as I had bought my return ticket from Kiev), I got the train to Kiev. 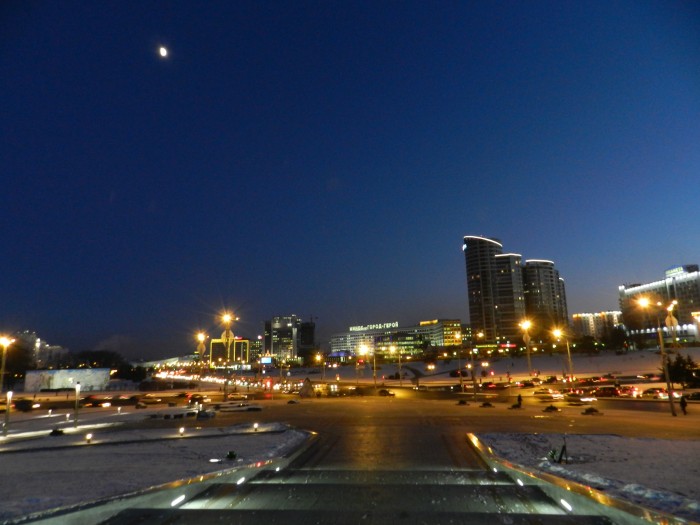 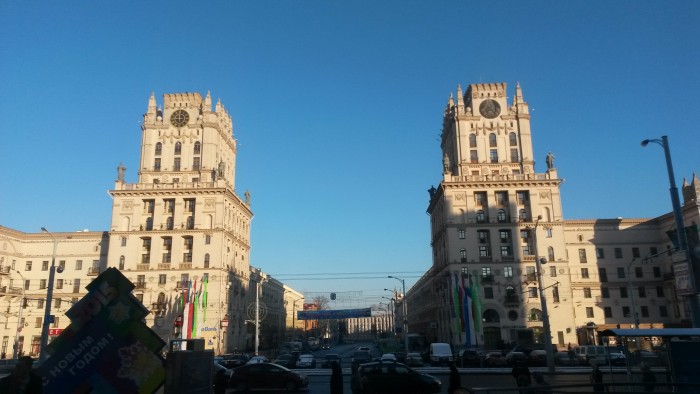 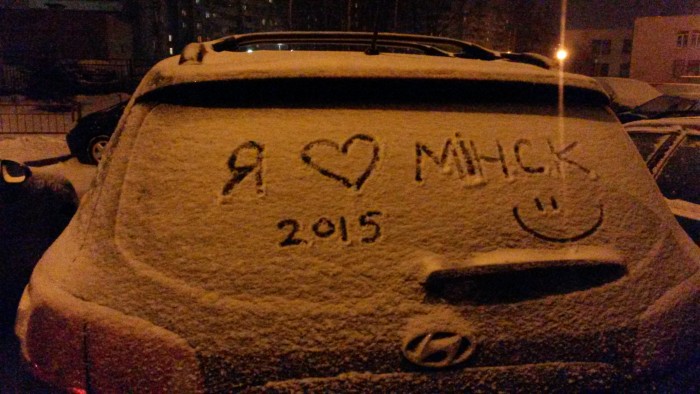 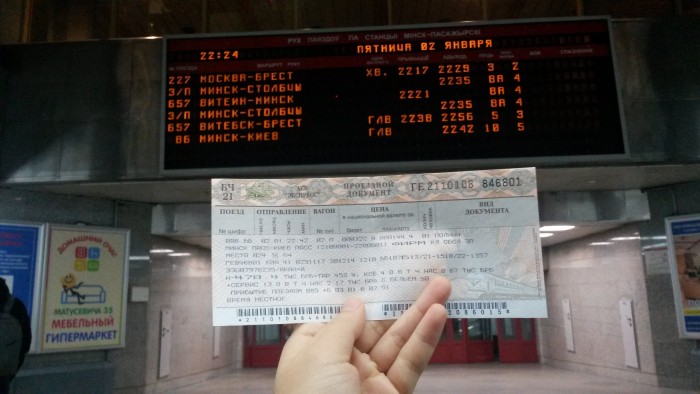 after having the train from Moscow to Minsk, again from Minsk to Kiev by train

As soon as I got on the train, I was looking around all confused, trying to figure out how to make the bed as i didn’t have any idea before, at least not on a train. Just at that moment, heaven-sent man, Igor, who was speaking English like natives, offered me a hand which I appreciated a lot. I was really lucky to find (amongst all locals) a guy whom I was able to talk while traveling, until one of the ladies warned us, telling that she needs to get some sleep. By that time I learned that Igor has been living in America for years and just returned to Ukraine and told me his dream about having a 10 mt boat to sail in the coast of Black Sea in the future. In the morning, when we arrived at terminal, just before saying goodbye to each other, I gave Igor a package of Turkish coffee as it was the only thing I had to give away. I wanted him to have something from me to remember our trip.

Knowing only the address and how to get there, I did not even have a working phone (sim-card), I got on the metro  a little nervous as I felt like a tiny fish in the ocean. All I had to do first, was to find the house that I was going to stay during my time in Kiev (fortunately I was accepted by a lovely host). Even though I had a bit difficulty finding the house in the beginning, with some helps of the local women that I went in a building and ask for a help, I could find the house within the taxi that the ladies arranged for me. Yulya and her husband welcomed me with great smiles on their faces on a misty morning in the suburbs of Kiev. Within her lovely kitchen, Yulya made me the most delicious tea I ever had in my life, with herbs and some flowers in it. As I arrived on the weekend, I was so lucky that everyone was there and I had the chance to have some traditional Russian/Ukrainian meal while trying to hear the stories of the people within curiosity whom I have just met. 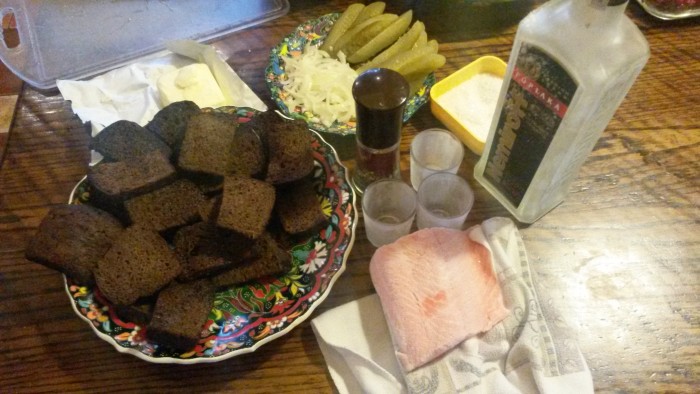 Russian classy Stroganina: fried bread slices in butter, sliced raw salmon on the bread with pickle,onion and black pepper. you eat it after you drink the shot of vodka. the taste is inexplainable. (Kiev) 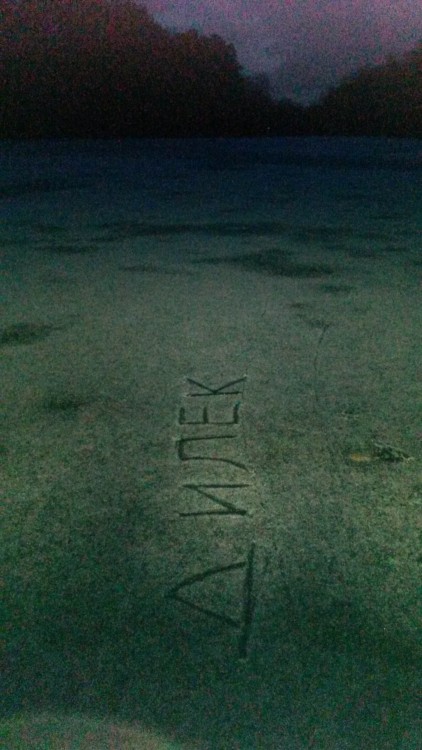 I wrote my name in Cyrillic on the frozen lake in Pushcha Voditsa, Kiev

I would like to tell that I had a great time there in Kiev. Especially, after the hard schedule of Moscow and Minsk, in Kiev I just went with the flow. First night, I went in the city on my own, walked around, looked at how people were having fun with the concerts on the streets and vitality of the Maidan Nezalezhnosti just fascinated me. In  the next two days, I made a walk in the forest in the area of the host’s house, first time in my life, I walked on a frozen lake with the doubtfulness because of the possibility of the ice breaking, with the company of two locals Ana and Katerina whom I met, I wasn’t alone to visit the Chernobyl Museum, National Art Museum of Ukraine, beautiful turquoise domed St.Andrew’s Church and Peizahznaya Valley in Andriivski district when it was snowing heavily and after Golden Gate ( Zoloti Vorota) and we had a dinner at Puzata Khata, local homefood restaurant. 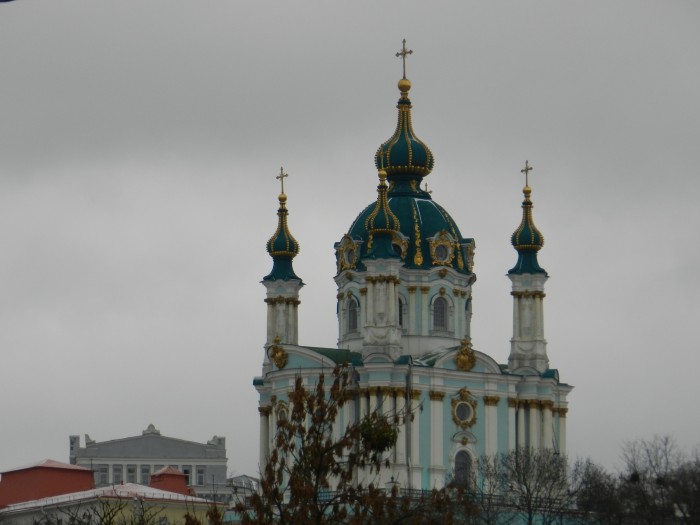 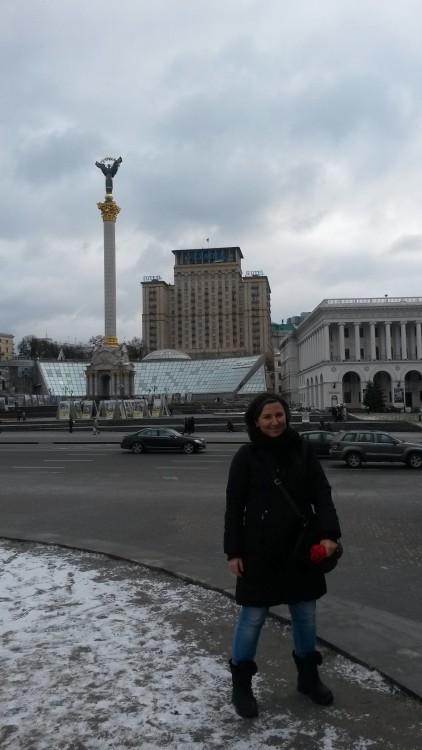 me in Maidan Nezalezhnosti, 5th of January

To make the long story short, with the hope of having a nice year ahead of us/me, I traveled to a totally new geography that I had known a very little about, only some of the historical movies by then and some knowledges that full of mistakes which sticked in my mind since high school. At the end of my trip, I came to recognizing the Cyrillic alphabet, learned the history in place, survived the soviet metro, tasted the real vodka and Russian salad, met gorgeous people whom I would like to meet in the future as well. Most importantly, none of the shops or any other buildings were closed due to Christmas and I didn’t run across any mafia on the street and didn’t freeze to death in Moscow and didn’t witness any civil war in Kiev as I had been told. All I had was a pocketful lovely and challenging experiences that I will remember with a smile on my face. 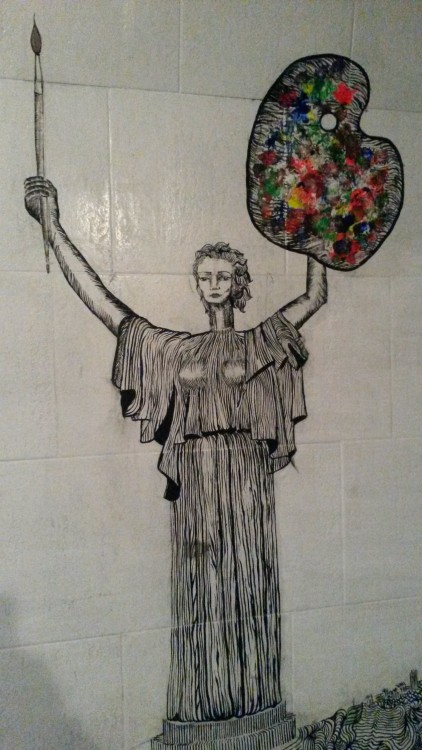 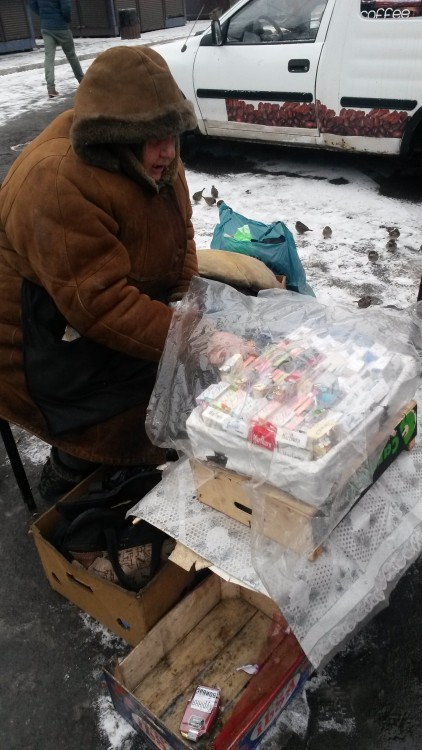 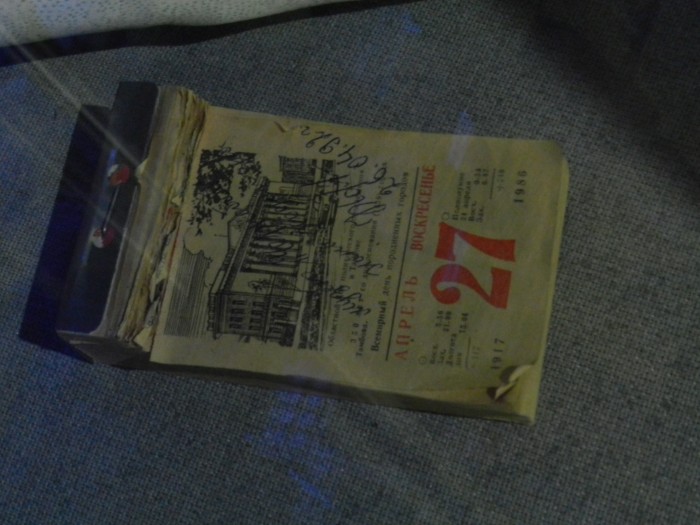