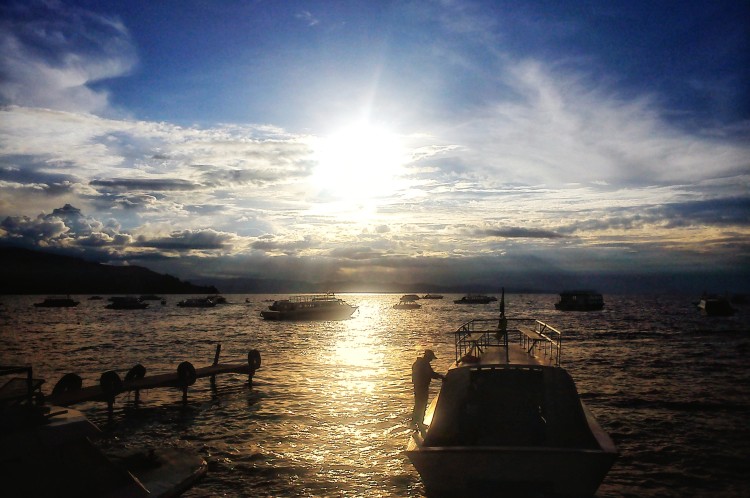 You may know that Bolivia doesn’t have access to the sea and that is correct but 5 hours from La Paz downtown you can find Copacabana, a beautiful town at the shore of the highest navigable lake in the world the Titicaca, home of the giant frog and the golden trout. You can still find rocks of the Permian Period in Copacabana what shows that in the Paleozoic Era, this peninsula was a warm water sea.

Can we consider Copacabana a beach? Well a beach is an extension of sand by a water body like a river, lake or sea; so yes it is a beach but at 3848 meters above sea level. It is a stop point for backpackers when they go from Bolivia to Peru or vice versa due to the proximity to Puno in Peru.

Now that you know how the trip to get there will be, you are maybe asking: okay, but are you going to tell what to do in Copacabana Bolivia? and let me tell you, there is plenty you can do.

This is an obligatory stop for most Bolivian tourists, pretty much the number one in their to do list of what to do in Copacabana Bolivia and this is because the Cathedral is the home of the Copacabana Virgin Mary and she has a lot of worshipers. 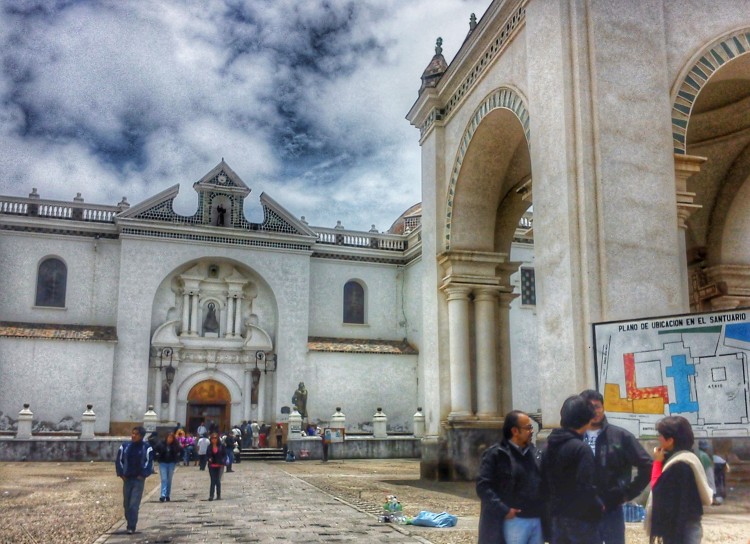 It was built around the XVI Century; it has Renaissance and baroque architecture. The Virgin Mary statue inside, called the Candelaria Virgin was carved in the year 1580 by indigenous artist Francisco Tito Yupanqui descendant of Inca emperor Túpac Yupanqui. The atrium was built with rocks from Titicaca Lake. For the architects reading I highly recommend putting the cathedral on your what to do in Copacabana list.

Going around the cathedral and to your left, you will find a chapel filled with lighted candles, people light a candle as a way to ask the virgin to guard them and their loved ones, if the candle stays still and burns completely you can be relieved because everything will come out just fine, so you can write buy candles for my loved ones in your what to do in Copacabana Bolivia list.

Fun Fact: Twice a day the priest of the Copacabana Cathedral comes out to bless the line of cars parked outside, whenever people get a new car the make the trip to Copacabana to get the blessing of the priest and the Virgin Mary, they believe it will protect them from any accidents. This is very important in locals what to do in Copacabana list.

The Calvary is a mount filled with steps that you need to follow to get to the top; the steps symbolize the 14 stages of Jesus crucifixion. 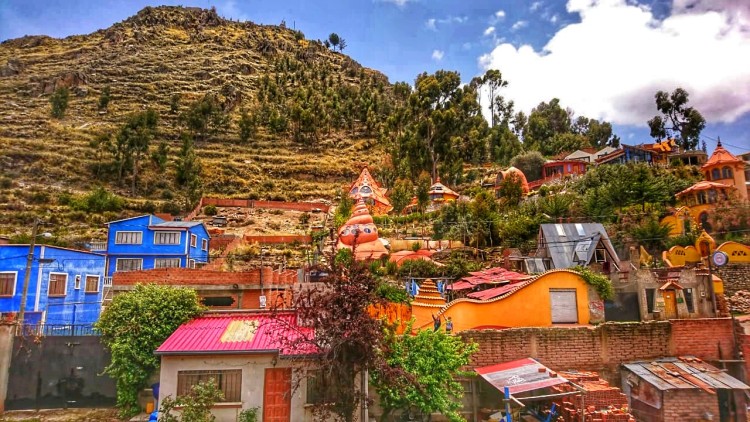 Believers take rocks from the calvary and in holly week they make the hike with them, putting one in every Cross, this symbolizes they are being relieved of their sins. So if you are a catholic you might want to add the Calvary to your what to do in Copacabana Bolivia list.

In the top of the hill you will find people selling stuff in miniature such as little houses, cars, food, or fake money like monopoly money and that is because Bolivian people believe that if you buy the miniatures of things you would like to have in real life and have faith you will have them by the next year.

Yatiris (Andean priests) are in the steps and the top of the hill they can read your future on coca leaves or bless the miniatures you have bought but if you aren’t really a religious person, don’t worry the view from the top Calvary hill alone is worth the hike. That’s way is recommended in the lists of what to do in Copacabana Bolivia.

Fun fact: It was considered a Holly place or huaca by the Incas.

Tip: It is recommended to hike the Calvario in the afternoon to get beautiful views and photos of the sunset in the lake. Keep it in mind when you are planning your what to do in Copacabana list.

Despite its name the Inca’s Gallows is an astronomic lab situated in the Quesasani mount, on top the native astronomers built two parallel jambs and seven rocks as a crossbar, when the Spanish conquerors saw this lab and its shape they mistakenly believed it was a gallows and because the biggest civilization they found was the Incan, they thought every monument was Inca.

In the 80’s archeologist Oswaldo Rivera Sundt discovered that the monument nether Inca or a Galows, when he placed his compass on the crossbar, he found out it was perfectly lined north to south it was used to predict the seasons, summer solstice and eclipses.

Now it’s believed that the monument was built by the chiripa civilization circa 1764 B.C. and the correct name for it would be Pachataka (place where the time is measured).

This monument is often overlooked by tourist when they are planning what to do in Copacabana Bolivia, but I urge you to go and see it, it’s amazing to know that astronomy was studied so long before Christ.

The Sun Island is probably the most visited place in Copacabana and number one in the tourists list of what to do in Copacabana Bolivia. It’s around two hours from Copacabana, at the dock you will be greeted by local tour guides and can join one of them to take the tour.

Most likely the tour guide will take to the Museo de Oro de la Ciudad Sumergida (Gold Museum of the submerged city) and after will take you for a hike to the archeological center where the ruins of the places where Incas used to worship God Inti (God Sun) are, such as the Roca Sagrada (Sacred Rock), the Chinkana labyrinth and the ruins of Pilkokaina Palace.

Most people feel calm and peace while they are trekking. The views of the lake, the ruins and the peaceful communities that live there create a very relaxing stay. The spiritual state of mind this place gives you alone is worth the trip and yoga retreats are usually held in this place, it really should be in your what to do in Copacabana Bolivia list.

Fun fact: It’s called Sun Island because the Incas believed that when the great flood happened and everything was darkness, the sun and the moon took shelter in these islands (Sun and Moon islands) after the storm the sun took a big stomp and went back to the sky.

Tip: Take your hike easy, the Sun Island is 3800 meters above sea level, if you try to hike or walk too fast you could get sorojchi (altitude sickness) which will give you dizziness and a big headache. I want you to know what to do in Copacabana Bolivia and keep you safe while doing it.

Moon Island is smaller than Sun Island and has a lot less tourist traffic, so you might prefer it if you don’t like crowded places. Here you can see the Palacio de las Vírgenes (Virgins Palace) and the Moon Temple. 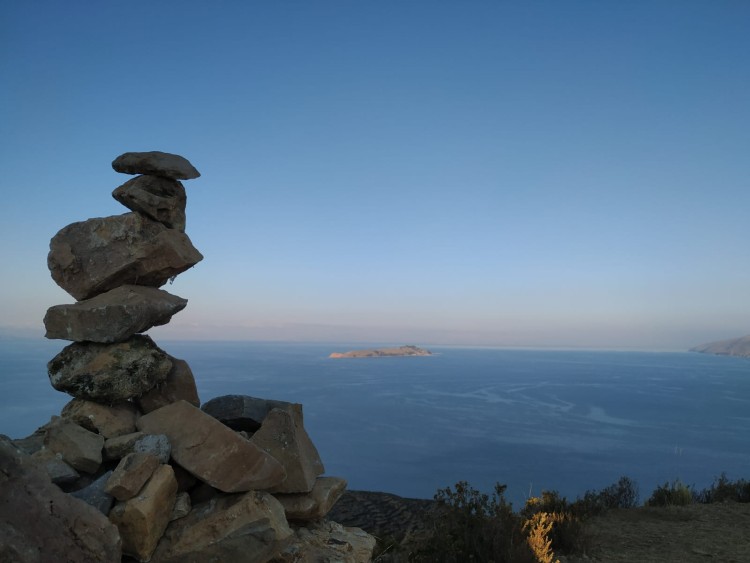 The Moon Island is located 8 kilometers from Sun Island and even if it’s not as big or known as the Sun Island, It’s a gorgeous places filled with history, keep it in mind as you are writing  your  what to do in Copacabana Bolivia list.

Fun Fact: The Island used to be an Acllahuasi or the chosen ones house, here girls from the age eight devoted their lives to the sun god, they were taught how to knit and cook among other labors. To be a chosen one, the girl had to be of white complexion and from a good family, they would become secondary wives of the Inca or (some say) human sacrifice.

Now that you know what to do in Copacabana Bolivia, you are probably asking: what can I eat there?  Let me tell you that you have a lot of choices because restaurants offer Mexican, Italian and most international food, if you are vegan don’t worry you  can find vegan food too, but the typical food is trout and the freshest trout can be found in the floating islands. They aren’t technically islands but more of a construct of totora branches floating on the lake built next to the Chani community. 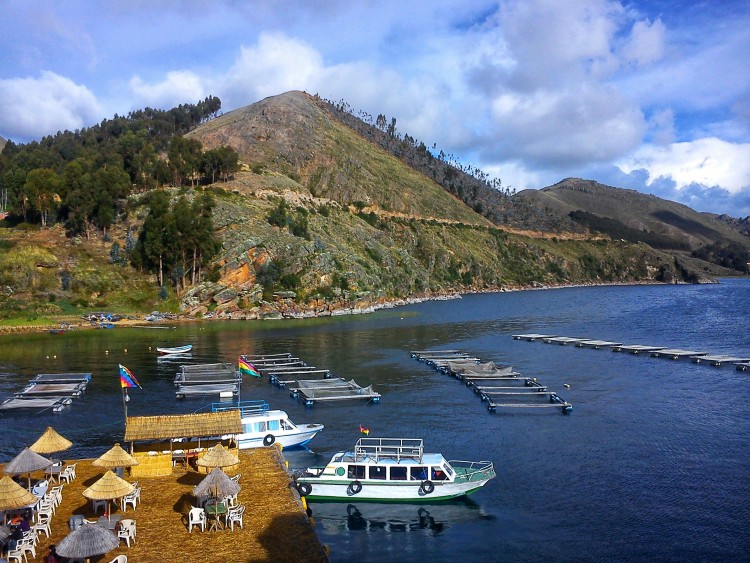 There are 3 floating islands Pariti, Suriqui y Peñón Blanco. In Peñón Blanco is the restaurant, it has a trout breeding place so you can actually pick which one you want to eat and how you want to fish to be cooked but if you are vegan don’t write it off your what to do in Copacabana Bolivia list just yet because next to Peñón Blanco is a beautiful little beach that you can visit. In Parití you can find the Tiahuanacotan Ceramics Museum and in Suriqui you can built your own totora raft.

How do you get there? On a boat of course, by now I’m sure that by now you know that most things in your what to do in Copacabana list involve a boat. The trip will take you 20 minutes but is worth it as the touristic attractions Virgin grout and the toad’s mouth are on the way.

Tip: The temperature is around 11º C/ 51.8 º F so you need warm clothes but the sun burns so sunscreen and sun glasses are needed.

Relax At The Beach

The beach is another great option in what to do in Copacabana Bolivia lists. You can walk on the lake shore, have something to eat, take a boat ride or just sit to enjoy the view of the majestic Titicaca. 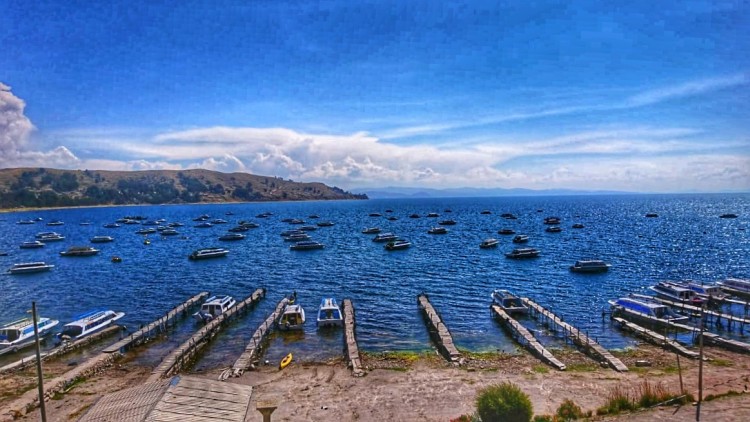 You might want to skip swimming or skinny dipping here because of the algae and because the water is usually very cold. Like you just read, there is so much to see, so many places to keep in mind while you are planning your what to do in Copacabana Bolivia list that I personally recommend you take at least two days to make the most of it.

Now you know what to do in Copacabana Bolivia, I really hope you take some time to visit the town in your next trip to Bolivia.