That’s the question I’ve been asked lately. When you are asked such precise questions, it might be quite tough to give a certain answer. Yet without hesitation, I’d directly tell ”Battambang”.  To be honest, I loved Cambodia  to the core and it might be really unfair comparing any city with the other. Therefore what I’m saying does not consist of any comparison, but rather energetic moments of mine. Maybe my answer will change in the future, when I return. However, at the moment, Battambang surely is my favourite place among all the cities I’ve been to. 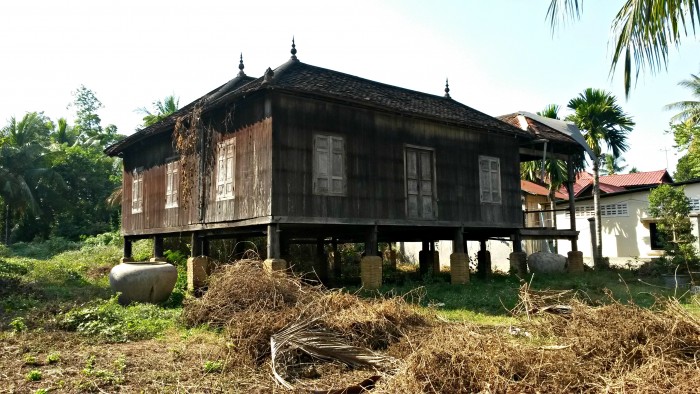 I like the way they make Khmer houses. Wat Kor village, Battambang.

Trying hard not to skip any museums, temples and of course archaeological remains both in Siem Reap and Phnom Penh, I didn’t expect to overstay in Battambang. I didn’t know much about the city except a few basic information I learned in the museums which I visited so far. Not only in ancient history, but also in recent history of the country, Battambang has an important place, yet I won’t mention the cruel details of the disastrous policy of the time. Actually there is no need of me giving details,  whoever would go and visit a couple of major places, will easily see what happened in this beautiful country and you will be able to see the sorrow behind the smiling eyes. What happened in the whole country is embedded in generations after generations, and no one seems afraid to talk about the past. Elders who witnessed the harsh times are just a walking history which you can learn from, if you are interested.

First thing I did when I arrived Battambang was renting a bicycle from Soksa Bike at  St. 1.5, where the staff was very kind and open to help to my questions. They also organize half or full day tours to the countryside, but I just wanted to travel around myself. The area around the center (especially St.1) is amazing with its Colonial-Era Architecture. You can easily see the French Architecture which was made in the early 20th century. I didn’t get bored at all, cycling around the riverside everyday. I was just looking at every building and the view along the river which i found very distinctive. 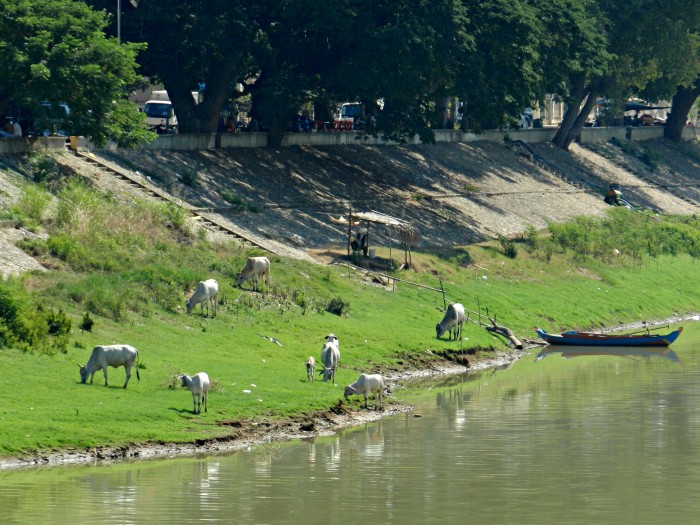 During the time I was in Cambodia (December-January) it was quite hot and I was drinking enough water within the day to prevent the dehydration, which is a real important issue, especially if you are spending most of the day outside.

Battambang doesn’t only have a major place in country’s history, but is also famous for its extensive rice fields. They say that Cambodia’s finest rice comes from Battambang. I could see the villagers put their rice to dry on the road, when I was cycling around.

First days are always museum days, only if its not Monday 🙂 However Battambang museum is open everyday except between 11:00 am and 2:30 pm. Even though it is a small museum, it exhibits quite fine pieces and statuary from Angkorian period, that were dug out in the area. If you are an archaeology lover like me, you may be quite satisfied with this small museum. 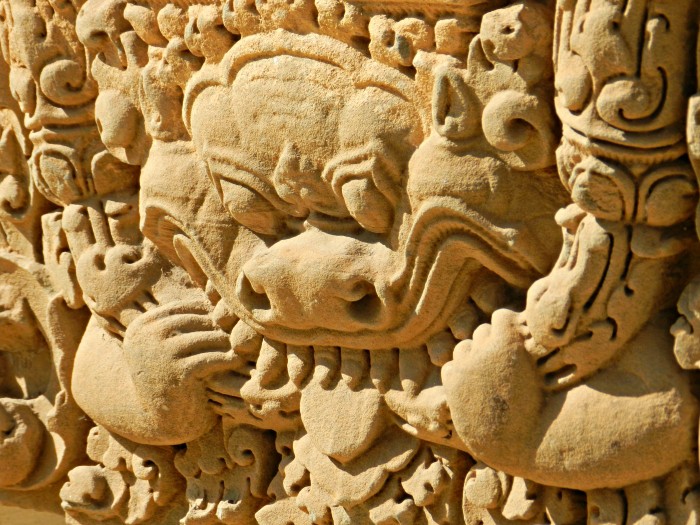 Surprisingly, it only took me about 3 days to start feeling like a local. As a traveler, surely you are out of the rat race. However, even the travel itself has its own discipline and routine. Waking up early in the morning, finding a nice, cute place for the first coffee of the day and checking on the map where to go next and getting along here and there until sunset, made me feel like I was the part of the city already.

Train Station of Battambang is another interesting place to visit to go back in time. The clock always shows 08:02 and the abandoned atmosphere of the area is a nice chance to shoot some great photos. 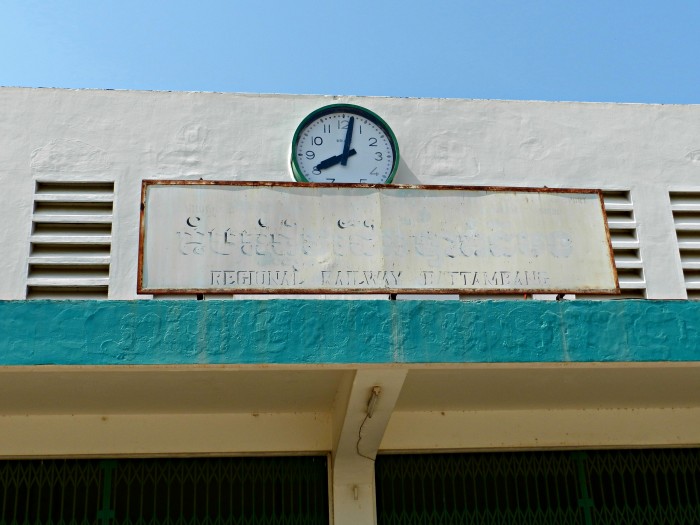 Having a bike with me, I was reaching everywhere I wanted quite easily. Wat Kor village seemed a pretty nice option for another day out. It is just 2 km away from the center of the city and quite eye pleasing with its peaceful atmosphere where everyone is taking it easy. Sangkae River is one of the main river in Battambang and is quite long. Cycling to Wat Kor Village I could still follow the river and found myself a nice spot to rest and take some photos. 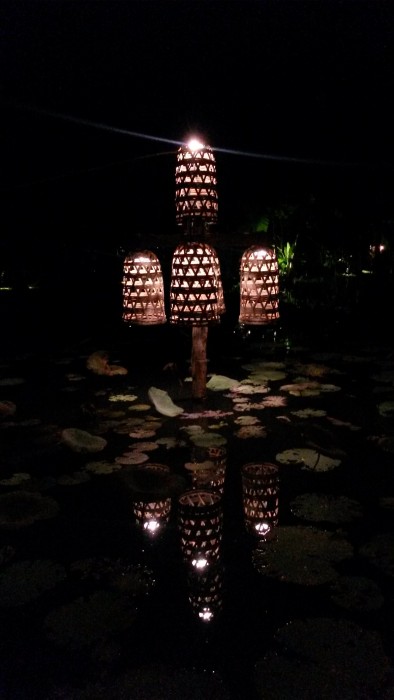 Maisons Wat Kor is really nice hotel and restaurant where you can enjoy by the poolside.

Soon after I met one of my friends, Seav Young, and it was such a coincidence to meet as I couldn’t know we would get along so well. Offering to give a hand at her English classes, she didn’t hesitate and instantly welcomed me. That’s how I had the chance to volunteer during my stay in  Battambang where people actually go to volunteer by contacting the local organization. Thanks to Seav Young I was also lucky to meet one of  her closest friends Chhorvy and together we had a great day out on a motorbike. They were so kind for taking me to some attractions in the city. We went to Wat Ek Phnom, where there was a giant Buddha statue and the ruined temple was like a less known Angkor Wat Temple and also not crowded. I was so happy to see the village life on the way, it was like a film strip – from the parents who were cooking outside to the children who were swimming in the river. 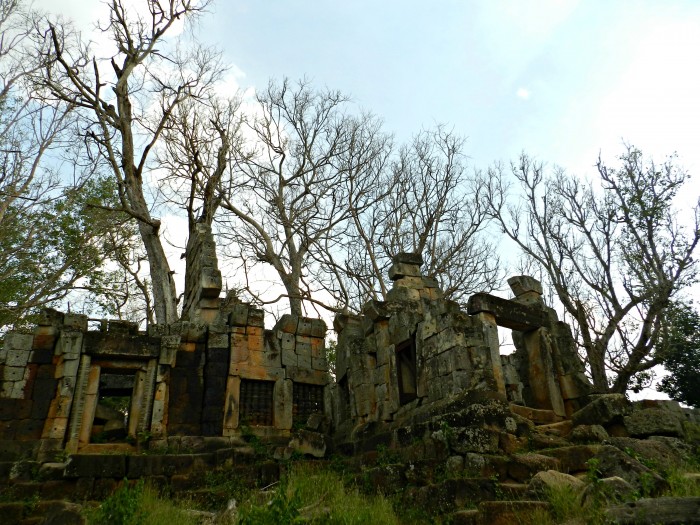 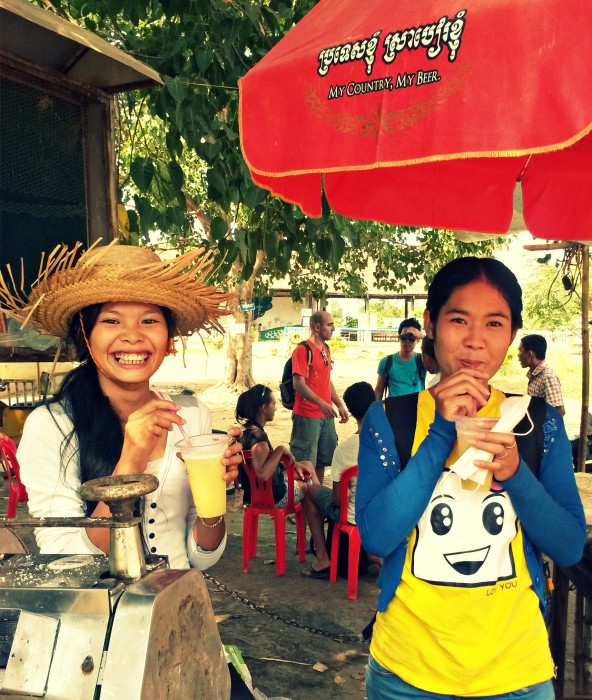 It is impossible to think  Battambang without the Bamboo Train. I still remember how much I enjoyed the old time classic rail journey. It was such an exciting experience for me to see the two trains come across opposite directions. The drivers (I don’t know the proper word for people who rides a bamboo train 🙂 ) disassemble one car and let the other one pass and meanwhile people who get off, wait until they assemble the car again. This happened a few times and it was really funny to watch and wave to strangers who are also tourists watching everything in astonishment. If one day you go to Battambang, Bamboo Train is definitely a must-do. 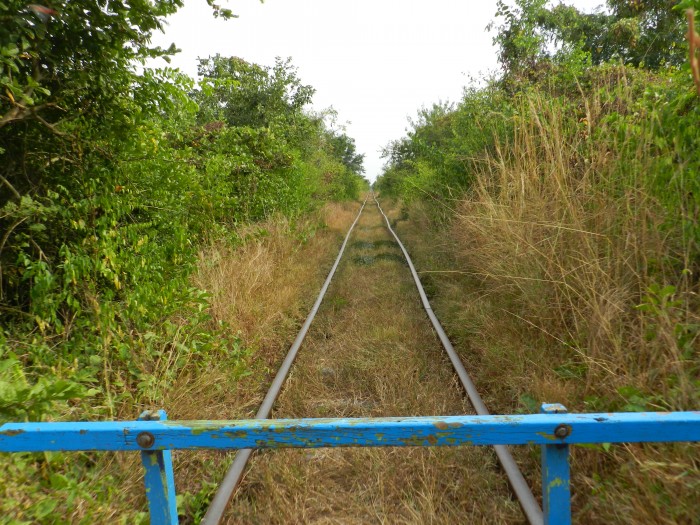 Our final stop where the girls took me, was Mount Sampov (Phnom Sampeau) where there is beautiful view of Battambang from up the mountain, where you can only see the green plain with full of  trees and nothing else. Cambodia as a country is still full of buried mines, and you can see the consequences of the mines by seeing people who lost their body parts anywhere, if you just look carefully. Just as being with full of mines, its a country of killing fields and caves. No matter how much you are trying to avoid any of  them, it just finds you wherever you are. It is such a recent history that you can find any information if you would like to learn about it. Walking down the killing cave of Mount Sampov, I thought ”that’s it”  because, to a certain extent, I understand the ”touristy attraction” but it was more than just an attraction and I promised myself  ”no more caves or fields”. Maybe they just want more and more people to look at them and learn a lesson, so that bad days won’t come back again, but In my humble opinion those bones and skulls must be buried to respect the deceased ones and let them rest in peace, or maybe it is just me who is being sentimental.

At the foothills of the Mount Sampov there is also a place where tens of people gather around to watch the bats leave their cave with the sunset. It was my first time to see so many of bats pour out of a cave and it lasted for minutes. It was a breathtaking beauty while looking up with a dropped jaw. 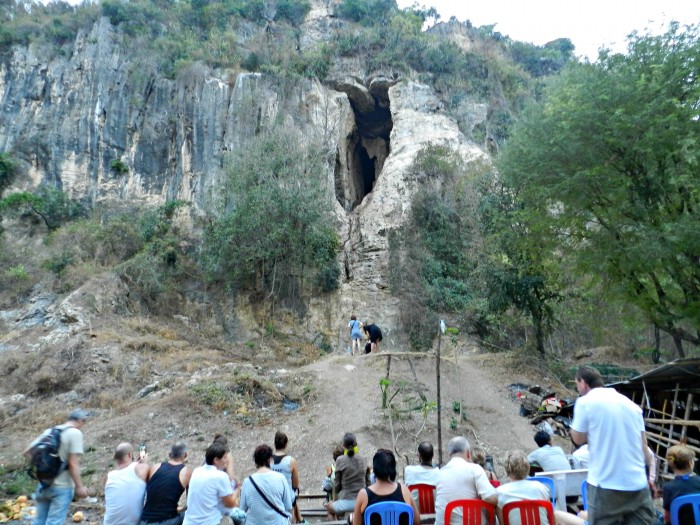 Thousands of bats pour out of the cave every evening at dusk. Mount Sampov

To general opinion, it may seem that there is not much to do in Battambang, yet people who don’t skip it within their routes, all just happen to love this place. I love it too and also the lovely people whom I had the chance to know and spend some time together, I felt the luckiest girl in the world and can’t wait for the next time to stay even longer. 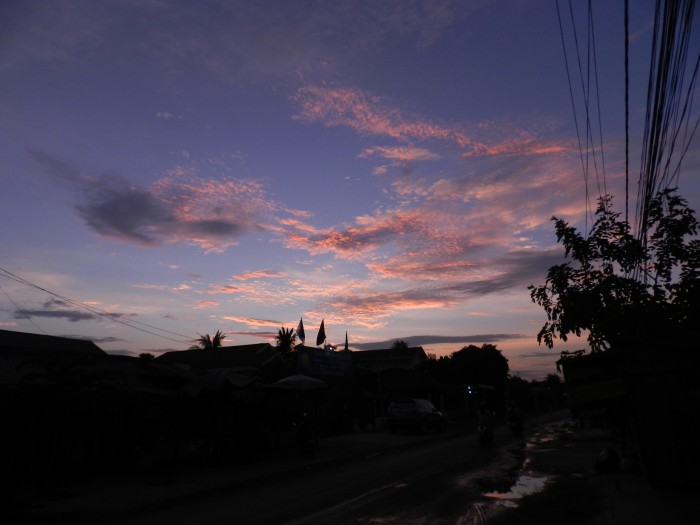 Sunset view from my room at Borey Thmey Guest House where the staff was lovely and caring. We were talking every evening about my trips here and there and practicing basic Khmer.