If Tbilisi, the capital, is the vibrant heart of Georgia, then Mtskheta is definitely its pure soul. Mtskheta, historical town, which is located at the confluence of the rivers Aragavi and Kura (Mtkvari), has been playing a very important role in long Georgian history. It was the seat of Georgian kings and it is still the seat of Georgian Orthodox Church – the main religion in Georgia. 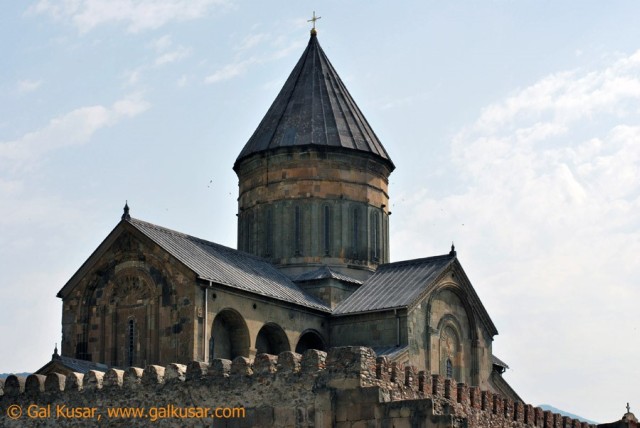 Soul and history of Georgia, historical town of Mtskheta

Christianity came to this beautiful part of Caucasus very early in history. According to the legend, in 4th century the Virgin Mary gave St. Nino a cross made of vines wood and ordered her to go to Mtskheta, the capital of Iveria, Kingdom of Eastern Georgia. With many miracles and good deeds, she attracted the people to the new faith. St. Nino also miraculously cured the queen Nano of many diseases she had suffered. Her husband, king Mirian III, was holding firmly paganism for some time, until he suddenly went blind, hunting in the woods. 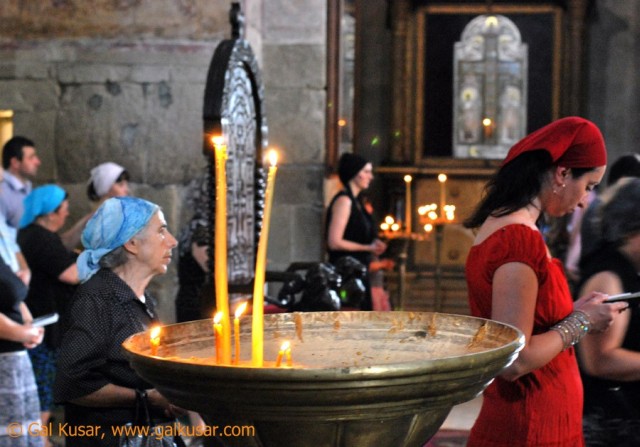 After praying to “Nino’s God” he got his eyesight back. This miracle was soon followed by a mass baptism in the river Aragavi and Christianity as early as in 327 AD became the official religion of Iveria. According to another legend, Jesus Christ’s suit is buried under 11th century Svetitskhovelska cathedral. From a nearby hill, the town is guarded by Javari (Cross) Monastery from the 6th century. Mtskheta, since 1994 under UNESCO protection, has found itself in 2009 in the “red list” because of too thorough renovation and hence the loss of the authenticity of the place. But it is still a very nice place to visit and if you had opportunity to do it, it would be worth to attend service in one of its churches.

The second most important place for Georgian Christianity is the monastery Davit Gareja. The road to get there from Tbilisi, leads the south past the industrial city of Rustavi. Some factories that are still working are reminiscent of the former glory of the working class and the heavy industry in the Soviet Union. But most of the factories are now decaying and poorly maintained as well as the socialist apartment blocks where people still lives. 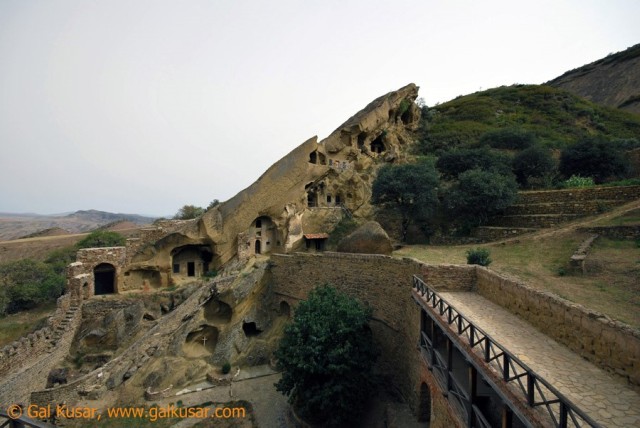 The landscape of southern province, which borders with Azerbaijan, is hilly, dry and overgrown with yellow, steppe vegetation. The Lavra monastery, one of the 15 monasteries in the vicinity of Davit Gareja, was founded by a monk called Davit Gareja in the 6th century. He arrived from Syria to what is now Georgia in order to revive Christianity. The monastery consists of a chapel and several cavities, humble monastic cells, where the monks lived their hermit lives. In history, the monastery was destroyed and rebuilt several times. In Soviet times all monasteries in the area were looted and neglected. The broad area of David Gareja monasteries was devoted to military and was off limits to visitors. Since 1991, the monks have returned to the monastery where they still live, work and pray.

Caucasus Mountains, a mountain range which highest peaks exceed 5,000 m a.s.l., are the natural northern border between Russia and Georgia. From east to west lays the hardly accessible mountain regions of Georgia, called Tusheti, Kazbegi and Svaneti. Tusheti are thought to be the most remote and therefore they called it an idyllic mountain paradise. To travel there from Pshaveli, you and your car should be prepared to drive more than 70 km on a gravel road that it is in such bad conditions that on many parts it is reminiscent of a torrential river bed. 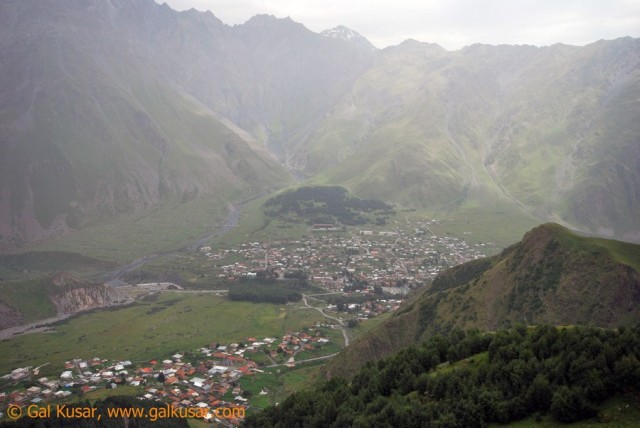 The region of Kazbegi is more accessible thanks to the Georgian military highway. The “highway” follows an ancient mountain route through the Caucasus mountain range and connects Tbilisi with Russian city of Vladikavkaz, the capital of the Russian North Ossetia province. You can spend a night or some weeks in Gudauri, which is a winter sports resort. 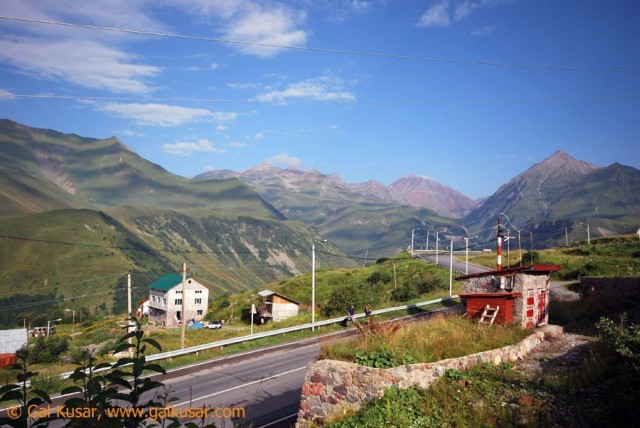 There are many cottages and small hotels, well maintained ski lifts and beautiful grass covered terrain for skiing. If you continue traveling on the Georgian military highway, you will go over a high mountain pass called Javari (2,379 m a.s.l.), and you will finally come to Kazbegi. It is a town of 1,750 m a.s.l. elevation, which is just a hand grenade throw away from the Russian border. Over the hill above the town, it is located a church build of stones from 14th century, devoted to Tsminda Sameba (Holy Trinity). If you climb up the hill you could see two dinosaurs carved in church facade. From the church yard, there is a beautiful view on the 5,047 m high Mount Kazbegi (Stepantsminda). However, while the region of Kazbegi is relatively well accessible (by Georgians’ standards), the region Svaneti is not. 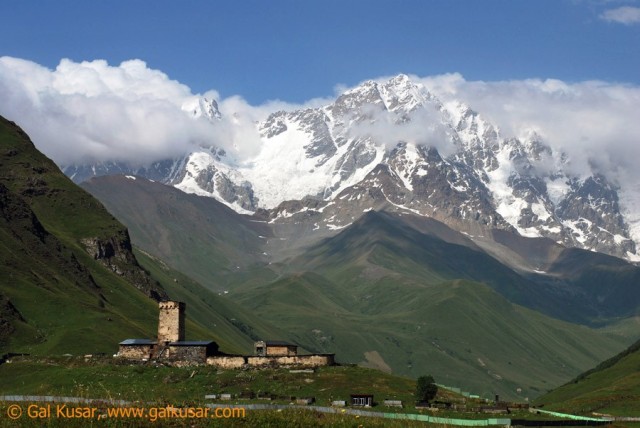 Svaneti is a closed world of rough terrain, mountain valleys and over four-thousand meter high mountains with sliding down glaciers which feed torrential rivers. Local people, called Svans, live in a traditional way of life in small stone made villages. Between the village’s houses, there are rising stone build towers (koshkebi), built between the 9th and 13th century. 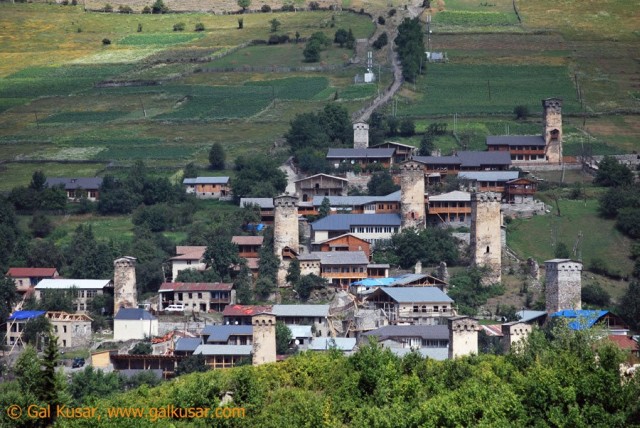 They were used by Svans as a shelter in many times where they were attacked. Although Svans have until recently practiced vendetta, the locals welcome their guests with utmost hospitality. The region offers plenty of opportunities for hiking, horseback riding, mountain biking and visiting the small villages as Ipari, Ajdishi or Ushguli. 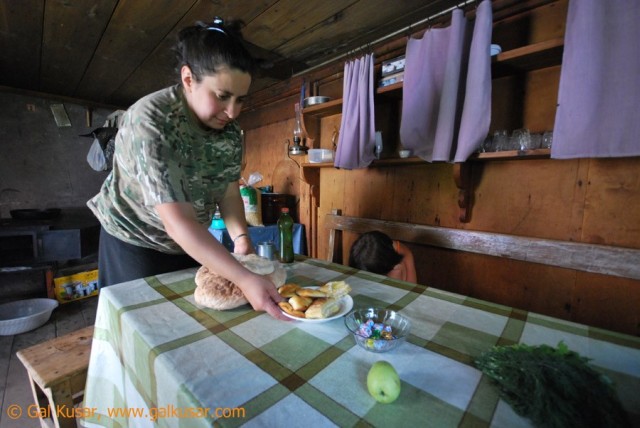 Svans are one of the most hospital people on the world, Ipari

Ushguli is, with altitude of 2,100 m, the highest permanently inhabited village in Europe. From Ushguli, you can walk or ride a horse on a half-day trek to the Shkhara glacier under the highest Georgian mountain Shkhara (5,068 m). The center of Svaneti region is a small but fast developing town called Mestia. 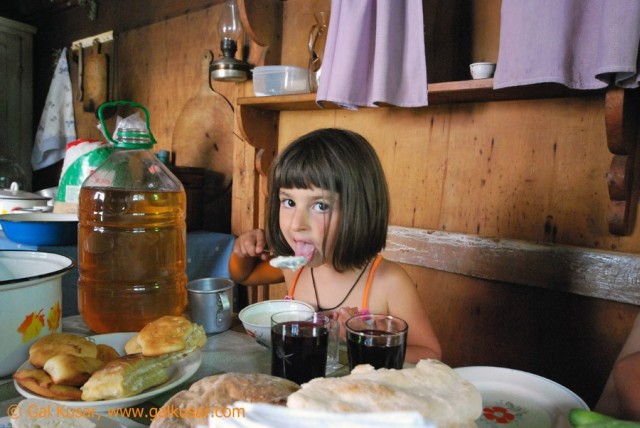 Mestia is accessible by a relative good road, but drivers should be careful with the rocks on the road. In 2012, Mestia was a large construction site. That would have surely increased the accommodation capacity on one hand, but on other hand, the place would have become crowded with tourists and in a few years, it would have lost its authenticity and atmosphere.