Tbilisi, the capital of Georgia, has more than one million residents. One quarter of the 4.57 million population lives there. It is a city of contrasts between old and new, poverty and wealth. Downtown, which stretches along Rustaveli Avenue, is immaculate; but a few blocks away there are neighborhoods with dilapidated houses or large, gray, depressive apartment blocks, remnants of the communist period. Opposite to the windows of luxury shops, people sit on improvised stalls. 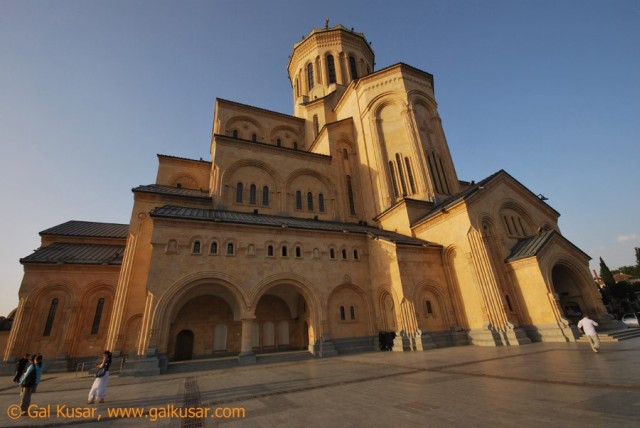 Some are selling worthless stuffs and others family silverware, hoping to get some laries to improve their poor family budgets and manage to survive from one month to another. Unemployment rate is high and pensions are low. The old part of the city, between the Mtkvari River and slopes of the hill, is a pleasant place to visit. There are plenty of cafes, bars, pubs and small restaurants where you can order delicious food, drink beer, vodka or famous Georgian wine with its distinctive flavor. You can rest there, watch people, read magazines or smoke shisha with aromatized tobacco. The cable car can take you to the top of the hill above the town, where stands Mother Georgia. A twenty meter high monument was built in the best real socialist manner. 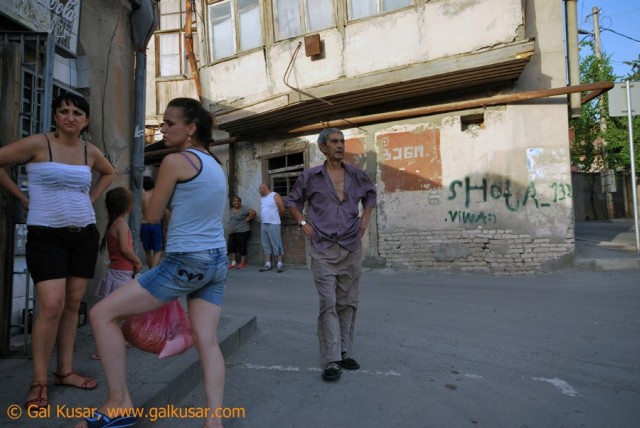 Life in the street, just some steps away from new President Palace in Tbilisi

The statue symbolizes, with a sword in one hand and the cup of wine in the other hand, the national character. Georgians should be hostile to their enemies (sword) and hospitable (wine) to their guests. From that hill, there is a beautiful view over the city. The newly built steel-and-glass bridge over Mtkvari River will call your attention. The official name of this master piece of Italian architect Michel De Lucchia is Peace Bridge. But most locals jokingly called it “Always”, due to its similarity with the female protection pad. On the other side of the river, you can see a shinning, recently built presidential palace, fenced with high concrete walls. With a glass dome it resembles to the White House. Behind the palace, on the upper level, there is a new cathedral devoted to Tsminda Samba (Holy Trinity), build in 2004.

The roads in Georgia are in very poor condition. Although main roads are paved, they are full of many large holes, those could easily break cars of inattentive drivers. Most of the roads on the countryside are unpaved; many of them are not far away from poor, gravel paths. Driving in Georgia is further complicated by the cows. It seems they really enjoy slowly walking in the middle of the road or resting and quietly chewing on bridges. 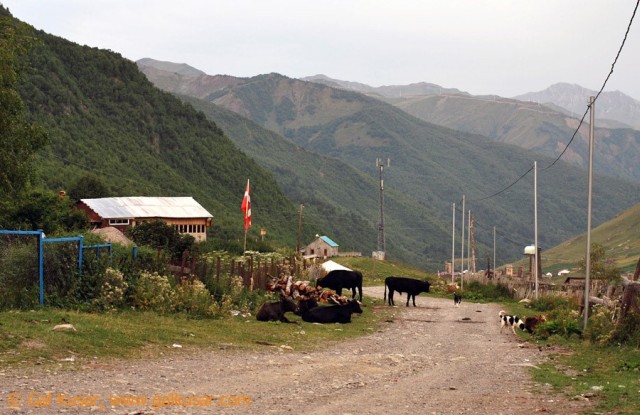 Georgian roads are in bad conditions and often occupied by cows

Although you are not in India, the cows surely take their time to give a car way, so drivers must be very patient! Nevertheless, it seems that the holes and the cows do not stop the locals from speeding, overtaking slower cars and animals on the right or on the left side, whenever they think there is a free space. The price of gasoline (1 EUR/l) is very high for Georgians. Teachers or civil servants salaries are 200 EUR per month. So the locals are forced to travel using the public transportation system. This system consists of popular maršrutkas (mini buses or vans) that will, on very cheap price of some laries and a lot of time, take you in every corner of this beautiful country. 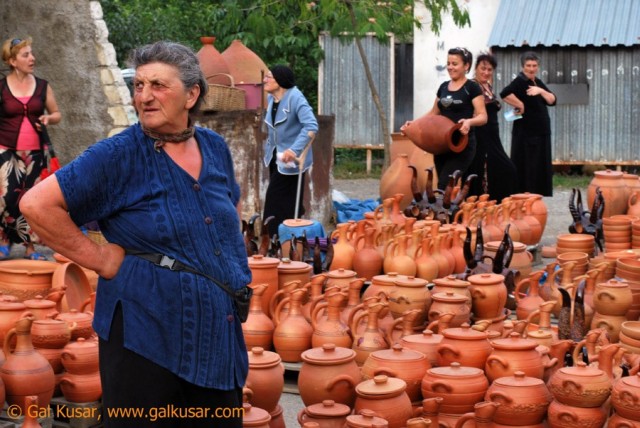 At Georgia’s roads, there is always something going on. The roadside villages sell a variety of their products on resting areas. It looks like in every village, there are craftsmen specialized in producing some things. Thus, in the first village, they are selling pottery, in the second they are selling bread, and in the third beach equipments…

The farmers on the roadsides everywhere in Georgia are selling watermelons and other sweet and fresh seasonal fruits for bargain. The plain, central part of Georgia has a mild continental climate. Summers could be very hot, but winters are usually mild because of the influence of warm and humid air that extends into the interior of the country through the rivers Rion and Kuri (Mtkvari) from the Black and Caspian Sea. 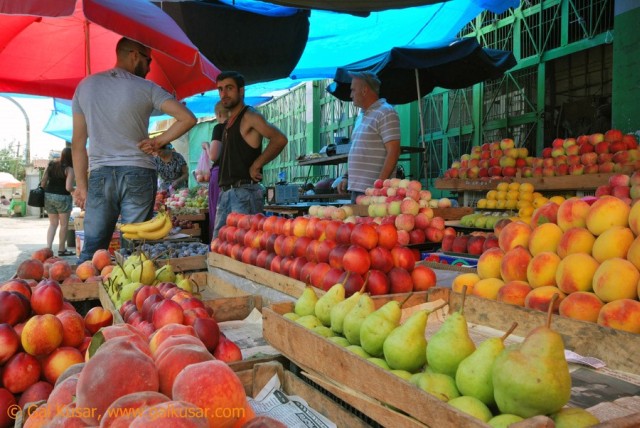 Mild climate allows the harvesting of Mediterranean products. They grow apricots, pomegranates, melons and watermelons, figs, grapes, peaches, apples, pears as well as walnuts, hazelnuts. In Western Georgia’s region Guria, the air humidity and climate conditions are perfect to grow tea plants. There, they produce the famous Georgian green tea or black tea. The black tea (leaves are fermented) was in communist Yugoslavia called “Russian tea”, because it was imported from “Russia” although it was produced in CCP Gruzia (Soviet Socialist Republic of Georgia). The center of the Georgian tea production is a small town Ozurgeti, where you should visit some tea factories. Friendly gatekeepers, even if there is no season and workers are on collective vacations, would love to show you production lines for fermenting, drying, sorting and packing of tea. Despite the fact that the Georgian tea is well known, the championship of the drinks still belongs to its wine.

On the hilly east of Georgia, there is the wine growing region of Kaheti. Georgians proudly claim that their country is the birthplace of wine, since it has 8,000 year-old tradition of winemaking. They still produce wine using their traditional methods. When the grapes are ripe, they are harvested, crushed and put in a kvere, a large clay made amphora buried in the ground. It takes half a year to ferment. 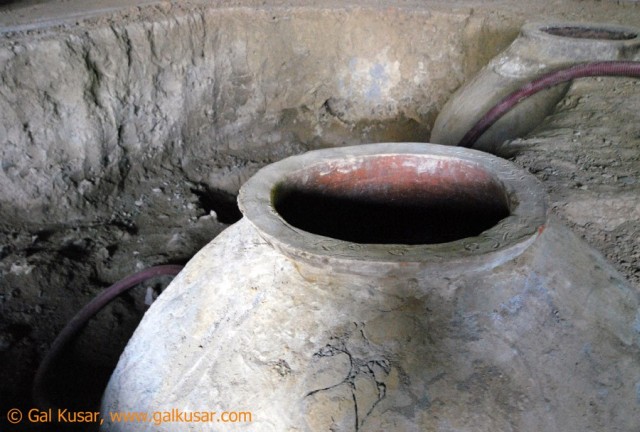 The new wine is then poured into another amphora, where it is preserved for several years. In that time, the wine develops its distinctive flavor. From the grapes residuals they distillate strong, vodka like alcohol drink, called chacha. The taste of Georgian wine is very unique and earthy. Some winegrowers still grow vines traditionally, on the trees. Trees are overgrown by vines similar to our ivy. Of course, picking the grapes is very time consuming and dangerous, because it is necessary to climb the trees. In small town Telavi, the center of the Kaheti region, there are many wine cellars and wineries. 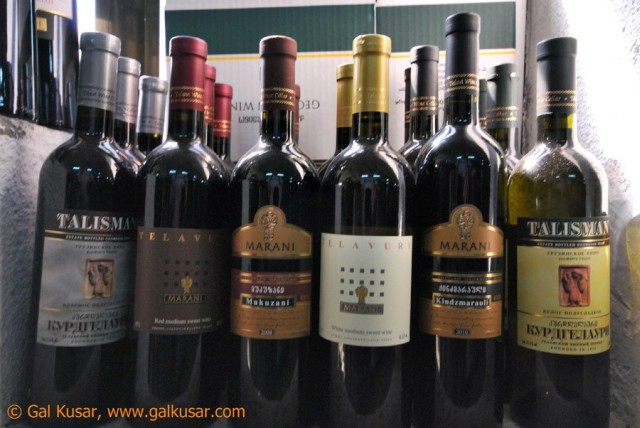 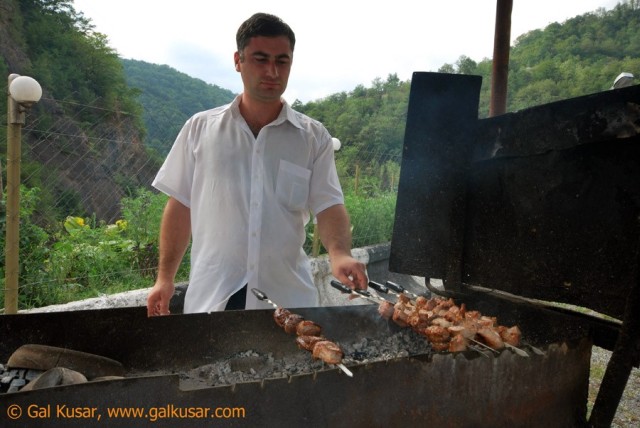 Actually, all Georgia smells like bread. In every village there is at least one bakery where the bread is baked in an old-fashioned way, in special clay ovens. Bread dough is stick to the inner circumference of the red-hot wood-fired oven and when flat bread is baked, it is peeled off the walls and eaten with fingers. The bread is warm and crunchy. 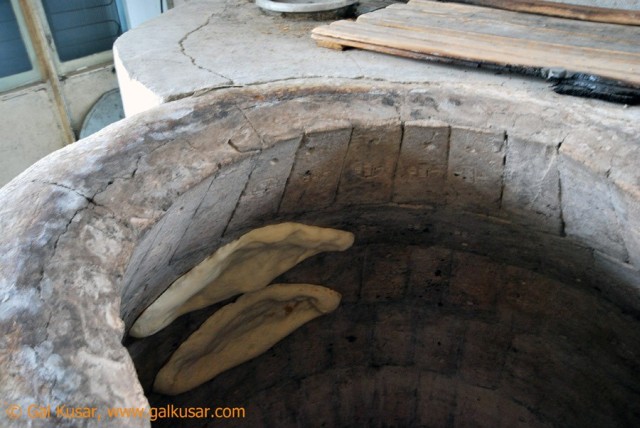 Georgia – country of bread, wine and tea
Rate this post