Hawaii are the last, 50th American state, the only one that consists only of islands, located in Oceania. I was lucky to be able to discover the island of Oahu, which is the most populated island of Hawaii with its 1,4 million inhabitants and it’s also the host of the Hawaiian capital, city of Honolulu.

Immediately when you step of the plane, you get consumed by a special, incredibly magical atmosphere of tropical America. There is no sign of severe officials as it’s usually the case in the most American airports, everybody is relaxed, nice, with smiles on their face, the halls are filled with the Hawaiian traditional music and the sweet sounds of ukulele, which fill my ears each time I think of Hawaii. If you are lucky to have a friend or organised ride pick you up at the airport, you will for sure be treated with one of the Hawaii’s loveliest gestures – flower wreath, named lei. 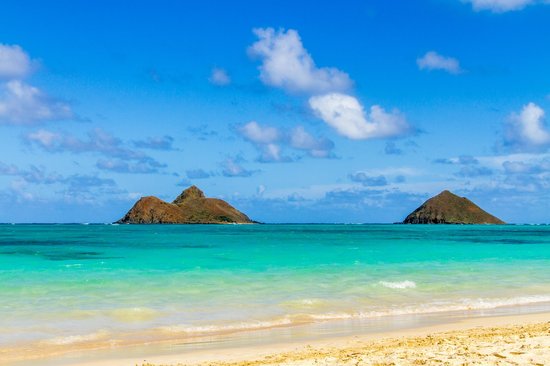 I had my first Hawaiian Pina Colada on the top of the “Top of Waikiki” tower, where they have a spinning bar and restaurant, which makes a whole circle around the top of the building, offering an amazing view of Waikiki. Waikiki is a touristy part of the Oahu Island, which is very, very neat, clean, safe and full of boutiques and great restaurants. The prejudice about bad food in the States is definitely not correct in my case, as everywhere else in the States I also found great food spots here as well. I ate the snails that I actually liked for the first time, fried calamari steaks, wonderful sushi, great Japanese food – since there is a lot of Japanese people in Hawaii due to the vicinity of Japan to Hawaii. The raw tuna tartar called Ahi Poke is an absolute must in Hawaii since it’s a local specialty, as well as Acai Bowl – made of oatmeal, milk or yoghurt and fresh fruits and honey.

The Waikiki area offers a great sandy beach with palm trees with a mighty dormant volcano Diamond Head in the end, which is one of the most famous sights in Hawaii. I went to the top of Diamond Head on foot from Waikiki, which is around 6 miles of walk, but the road there is so wonderful, I would’ve walked it for another hundred times. At some point I even saw whales on the horizon, which are also possible to be seen up close with the boat trips. The hiking trail to the top of volcano is nice and safely built. 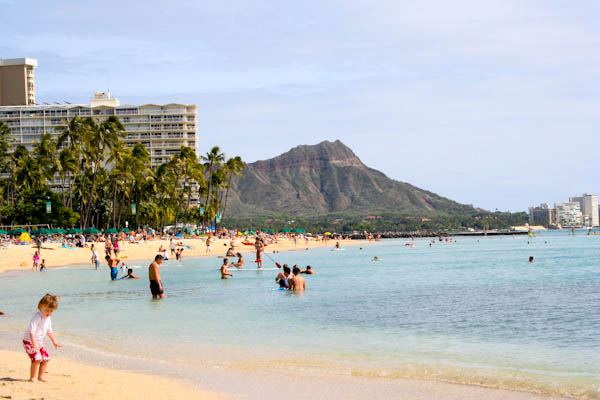 Hawaii offer beginner’s courses of surfing and supping on almost all the beaches of Oahu, which the islands are also very famous for – some of the worlds best surfers come exactly from Hawaii, where also a lot of surfing competitions take place. One of the main sights in Waikiki is precisely the statue of a famous Hawaiian Duke Kahanamoku, the so called “Father of modern surfing” and local hero.

A great place for surfing is the North Shore part of Oahu, where the waves perfect for surfing are present on the beaches everyday. Beaches on the north of the island are less crowded, since most of the tourists are staying in the resorts in Waikiki, they usually only go to the North Shore for short trips. So everyone can find their spot on the beaches there and enjoy some privacy and the sounds of the mighty waves. A very popular specialty on the North Shore are Garlic Shrimp, which are heavenly delicious, so don’t miss out on that one – I’ve had the best at “Giovanni’s Shrimp Truck”.

On Oahu there is also a water park called Sea Life Park, where you can swim with dolphins, manta rays and sea lions. The park and the dolphins living there were already featured in some hollywood blockbusters including movies starring celebrities like Drew Barrymore and Adam Sandler.

Worthy of seeing is definitely also one of the world’s most famous beaches Lanikai, a beach with a wonderful turquoise sea, white sands and two smaller rocky islands near the coast – just a dreamy scenario.

Then there is a Turtle Bay beach, which is a spot beloved by turtles living in the ocean there, they come swimming in the warm shallow waters and lay in the sun. It is a wonderful experience to see those magnificent creatures in their natural habitat. 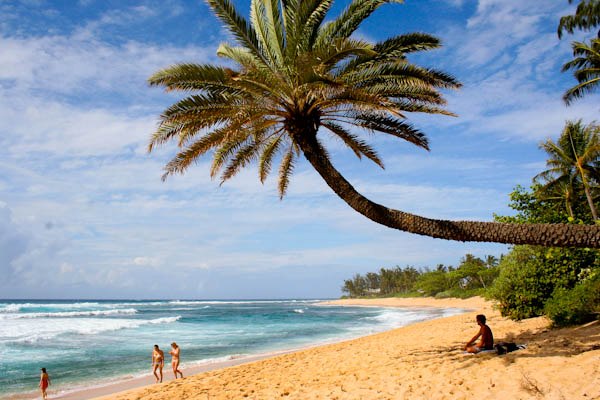 A cultural sight that you should definitely not miss on the island of Oahu is Pearl Harbour, an important historical place, one of the only locations in America that was a victim of foreign hostile attacks, where Japanese attacked the American fleet with the bombers. Today there is a big museum there, memorial, sunken ships and still preserved warships and submarines available for public viewing.

In the city of Honolulu there is a beautiful Iolani palace, which was once a residence of the Hawaiian royal family, which is an interesting information, since not a lot of people know Hawaii used to be under the monarchy of the royal blood.

People in Hawaii are incredibly nice, in almost every boutique I was chatting with the sales people, I was meeting new people during my walks on the street, in the evening in bars – already generally Americans are famous by being very open and communicative, but here this gorgeous tropical atmospehere loosens people up and therefore they are even more open for new acquaintances.

Hawaii offer all that and a lot more of other attractions, events and activities, I cannot wait to be back, all I can say is I absolutely fell in love with the island due to it’s lovely, magical energy and I am quite positive the same will happen to anybody who will ever step on it.

Hawaii, the Perfect Mixture of Typical America and Tropical Paradise
Rate this post