I always enjoy telling this story because it’s about one of greatest traveling experiences I’ve had so far.

It all started when me and my friend got a crazy and quite courageous idea to go to the city of New York, because it was something that we’ve both wanted since forever. I said courageous because the both of us were at that time around 20 year old students without a stable income. It seemed impossible at first, but we somehow managed to gather enough money for the trip and the first week and to get a job agreement in the state of New York, in order to ensure finance for our further stay there.

So before I knew it, I was already on a plane to New York City. You can imagine my excitement, traveling from the Balkans to this enormous city, the capital of the world. After around 8 hours, the plane landed on JFK and from there we got a taxi to the Port Authority Bus Terminal located in Manhattan, which is one of the five boroughs that New York City is consisted of.

Now days, Manhattan is the most populated borough of New York City. Just entering Manhattan and seeing the whole island from a distance, with all those skyscrapers is an experience like no other. I remember that my first though was “How on earth are humans capable of building and creating a city like this?” It made me realize and think about the amazing things that people are able to do. But the real shock started a bit later….when we’ve actually entered Manhattan.

All of a sudden, we were surrounded by lots and lots of people, who were either in a hurry or lost at the station, just like us. Different noises were coming from everywhere and I remember hearing maybe 10 different languages in less than 5 minutes from people passing by.

Getting a cab in the streets of Manhattan requires skills and lots of patience. After a lot of waving, yelling and competing with the crowd, we finally managed to get a cab that brought us in our hostel, where we started to plan what tourist attraction we’ll go to see first while staying in Manhattan.

Times Square is the heart of the city and is very often referred to as “The Center of the Universe” and “The Crossroads of the World”. At first, you may wonder why, but just one look and one step on Times Square instantly answers your question. The lights coming from everywhere and the huge crowds are overwhelming, and you get the feeling that everything which is happening in the world at that moment, happens on Times Square. Filled with bright advertisements and billboards and surrounded by skyscrapers, it’s the place in Manhattan that draws the most tourists annually, around 40 million. Times Square in all its glory is best seen from the bleacher seats, from where you have an open view at the most famous landmarks, which are the 1500 Broadway skyscraper, Chevrolet clock, the Hard Rock Café, 1 Astor Plaza, New York Times Tower, The Orion, Bank of America Tower and many others. If you’re a rock music fan, I strongly suggest visiting the Hard Rock Café, which has the best collection of rock and roll memorabilia I’ve ever seen.

One more thing that Times Square is known for is the New Year’s Eve celebration with the traditional ball drop. It’s a way of celebrating the last day of the year for more than 100 years. This celebration attracts lots of tourist from all around the world and on that day, there are twice more visitors than usual, so on every New Year’s eve there are around 1 million people on Times Square.

The Empire State Building is to this day the most famous skyscraper in Manhattan. It’s 443 m high and build in the art deco style. It got its name from the synonym for the state of New York, the Empire State. When the building was completed, it was the tallest skyscraper in the USA and in the world. Today, it’s the fourth tallest skyscraper in the USA and the 25th in the world. The main reason why every tourist in Manhattan must visit this building is the beautiful observation deck on the 86th floor. The view is so impressive and breathtaking, that it definitely pays off to wait in the annoying, endless lines and to squeeze in the crowded elevator, which is even more uncomfortable if you’re a bit claustrophobic like me. Getting to the observation deck and taking a look at the whole island of Manhattan, from Times Square and all the other famous skyscrapers to the Statue of Liberty, makes you instantly forget every unpleasant experience you may have had while in the building.

From here, you can also see the famous Brooklyn Bridge over the East River, as well as Central Park.

There is also another observation deck on the 102nd floor, which is opened only for a smaller number or tourists, due to the deck’s size, which is much smaller than the one on the 86th floor. 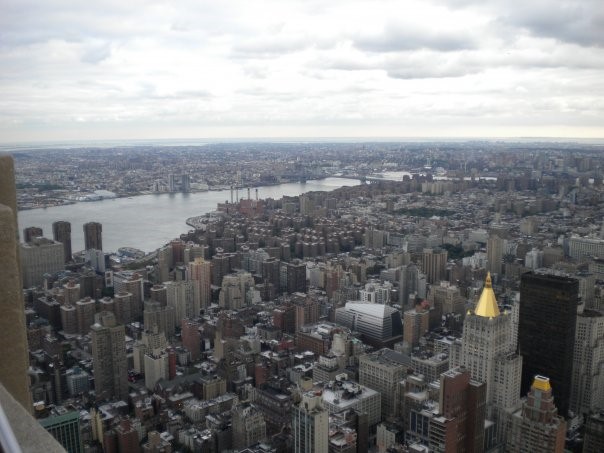 The beautiful view from the Empire State Building 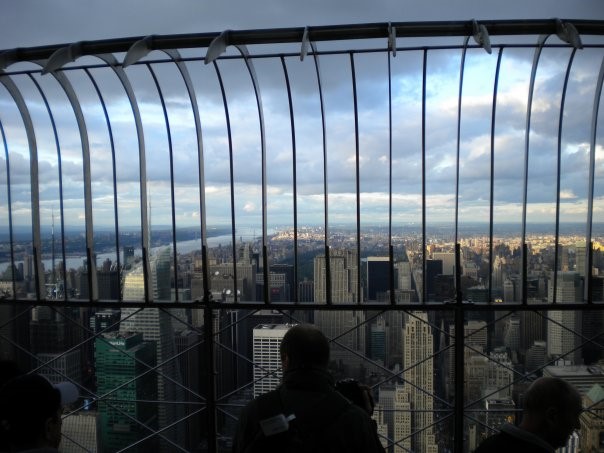 The Brooklyn Bridge connects the boroughs of Manhattan and Brooklyn and taking a walk on it is something that I strongly recommend. You can also pass the bridge by driving or biking, but it’s a lot more enjoyable if you take a slow stroll across it, so you can enjoy in the beautiful views and admire the wonderfully structured bridge. In my opinion, besides the Empire State Building, it’s the best place to observe the island of Manhattan. 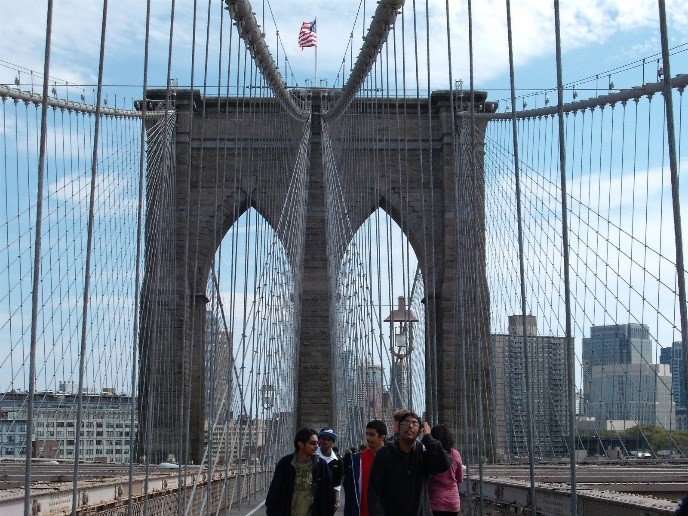 Taking a walk on Brooklyn Bridge

So, obviously, there are two ways to cross the bridge – starting from Manhattan or starting from Brooklyn. Very often tourists ask the question “Which is the better way to walk on the Brooklyn Bridge?” I was very lucky to had my own personal “tourist guide”, who is dear friend of mine from NYC, when I walked the Brooklyn Bride, so he suggested the “from Brooklyn to Manhattan way”, saying that he tried both and that’s the better way. That worked out perfectly, we took the metro to Brooklyn and went on one of the most amazing walks of my life! I was more than happy that I’ve accepted my friend’s suggestion, but if you ask me, I’ll say that there’s no right and wrong way…..the Brooklyn Bridge gives you an unforgettable experience in either way. 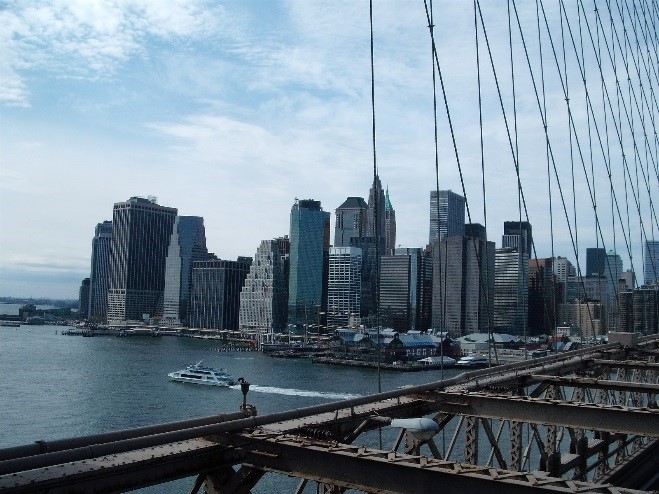 Taking a walk on Brooklyn Bridge

The most famous landmarks that you can see from the bridge is the Statue of Liberty National Monument standing tall on the Liberty Island. Also, you’ll get an amazing view of all of the famous skyscrapers that are rising from the river like giants, and the New York Harbor boat traffic. 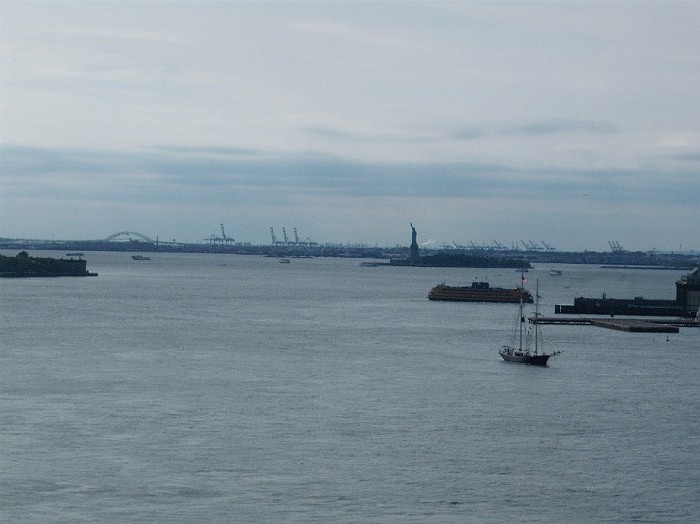 If Time Square is the heart of Manhattan, it can be said that Central Park is its lungs. Central Park spreads on 778 acres and is one of the largest and most visited parks in the world. The huge skyscrapers standing behind the beautiful landscapes, give you the ultimate concord-jungle impression. 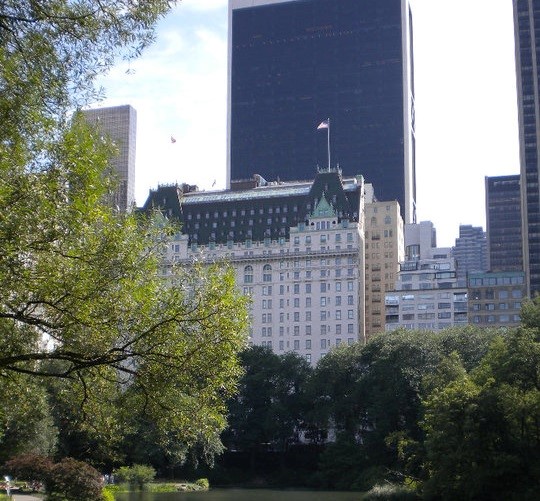 The park has 8 lakes, among which “The Jacqueline Kennedy Onassis Reservoir” is the main one. It’s something that first time visitors must see while in Central Park. Other famous lakes in the park are “The Rumble and Lake”, the “Harlem Meer” and the “Great Lawn”. 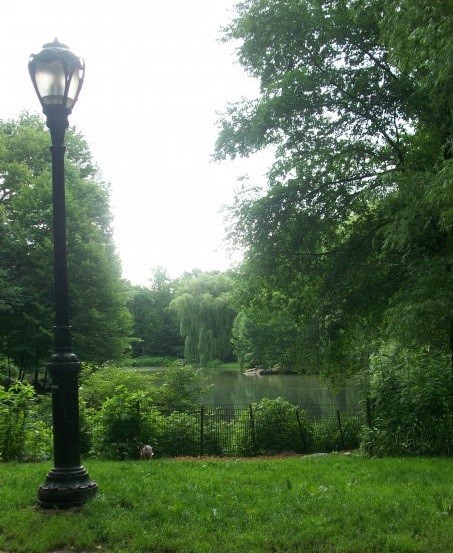 Taking a carriage tour across the park is a great way to see many of the park’s beauties and to get more familiar with all of the activities you can take while in the park. The park offers a lot to see and do, so you have to prioritize the activities and sightseeing depending on your personal interests. Some of the most famous attractions are the Central Park Zoo, which is a home of tropical, polar and temperate animals, the Charles A. Dana Discovery Center, which offers educational programs and seasonal exhibits, Strawberry Fields, which is a memorial to the famous Beatle and peace activist, John Lennon, the Cherry Hill, which is the perfect place for picnics or just to relax, the Shakespeare Garden, which is filled with flowers mentioned in the poet’s masterpieces, the Wollman Rink, for ice skating, and many other attractions. 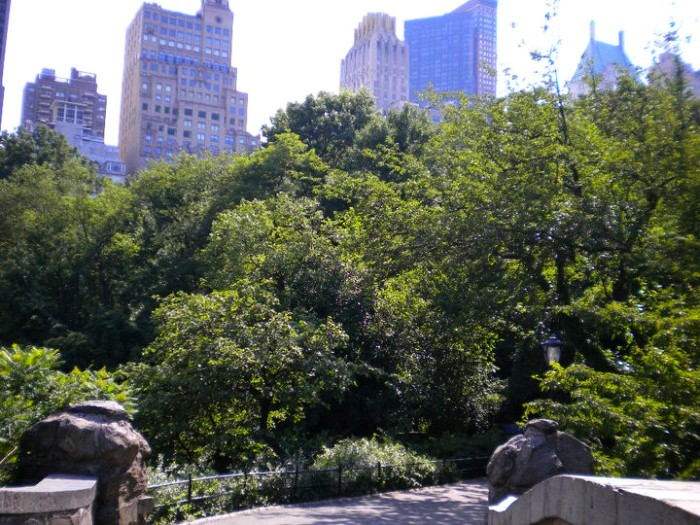 Wall Street is the most famous street in the financial district of New York City, spreading from Broadway to Lower Manhattan. The street’s name has become a term and a figure of speech for US financial markets and the American financial sector and has a significant economic importance for the city of New York and the US in general. 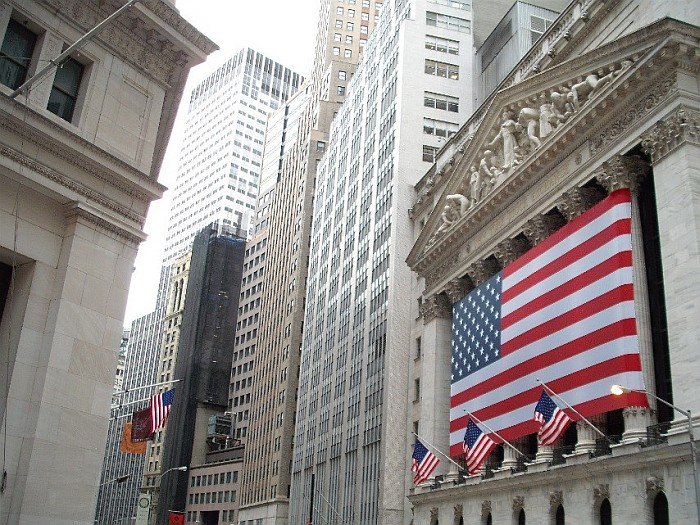 The New York Stock Exchange (building on the right)

Here you can see the New York Stock Exchange, which is the largest in the world. It’s also referred to as the “Big Board”. The most famous events that are connected to the exchange are the Black Tuesday in 1987, the mini-crash on Friday the 13th in 1997 and the effects on the exchange after the terrorist attacks on 09.11.2001.

On Wall Street you can also see the beautiful Trinity Church, which stands out from the other buildings with its detailed and impressive architecture both on the outside and inside. 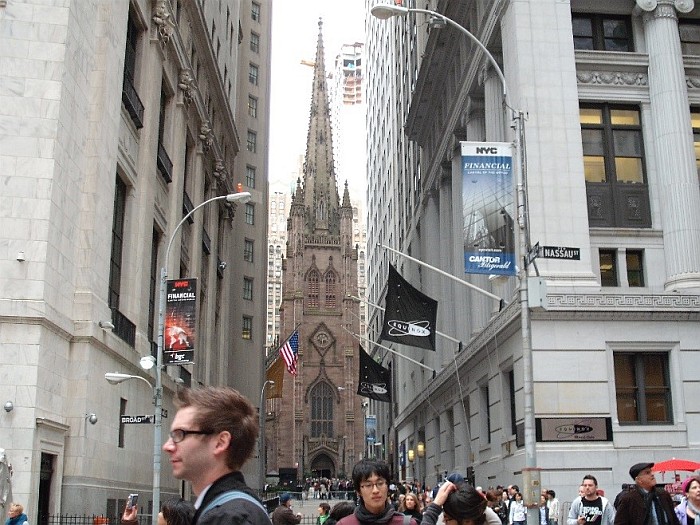 The most famous statue on this street is the “Charging Bull”, which is a major tourist attraction and one of the New York City’s symbols. According to the artist, Arturo Di Modica, the bull represents the strength, endless motivation and power of the Americans. It is also said that the statue symbolize the energy and unpredictability of the stock market. It’s definitely a beautiful statue that is obligatory to see while on Wall Street. 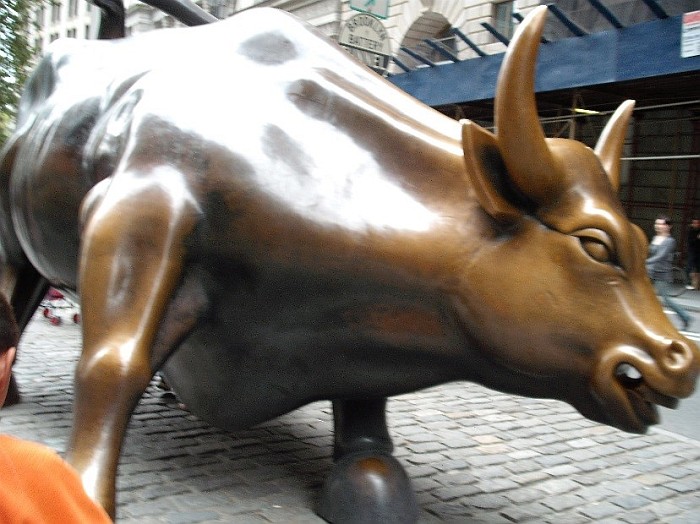 One more thing that I mustn’t miss mentioning is the Federal Hall National Memorial. It’s located near the stock exchange and it stands out with the Greek-styled architecture and the George Washington’s statue at the front of the hall. His inauguration took place on this building’s balcony.

For people who are looking forward to urban jungle adventures more than to a relaxing and calming vacation, Manhattan is the ideal place to visit. Because of its numerous attractions and countless activities to take, everyone who are planning to visit Manhattan should make a list of their priorities, because there’s simply not enough time to see and to do all, unless you are very lucky and can stay in Manhattan for a longer time.

It’s impossible to describe all of Manhattan’s tourist attractions in just one article, so to end with, I’ll only mention some of the other places you can see, like the Madison Square Garden, Metropolitan Museum of Art and the Guggenheim Museum (strongly recommended for art enthusiasts!), Washington Square Park, Chinatown, Rockefeller Center and The World Trade Center site or also known as Ground Zero.

Manhattan – The Heart of the Concrete Jungle
Rate this post