Many people talk of abandoning the rat race in favour of a more liberal way of life. Less people actually do it.

Back in the UK I was working in hospitality, exhausted and suffocated by the company’s expectations and my own indoctrinated compulsion to please others, with little reward. I asked myself countless times why I was doing it. The answer was that, I didn’t know.

Hostel jobs are a great way to move around freely without ties, but its easy to get caught up in the responsibility of looking after guests. And what should be an alternative option for a more flexible lifestyle, can turn into feeling like some maniacal grinning, 2-d office assistant, packed into ready-made software, only disconnected by the rare appearance of an amorphous screen-saver curtain. 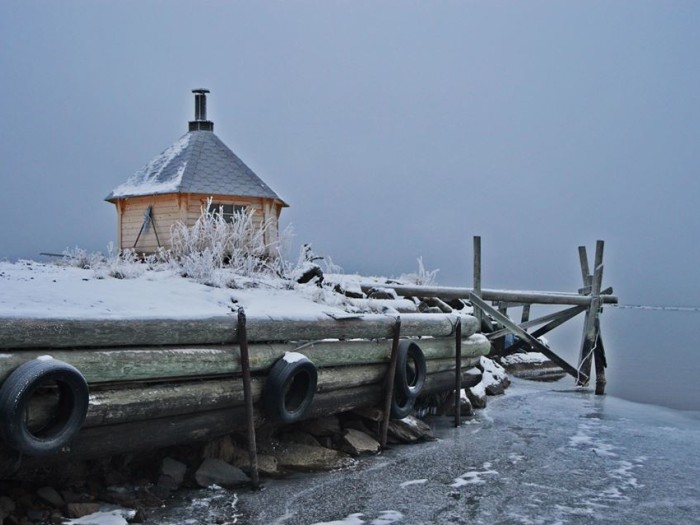 My partner and I not only ran but lived in a small hostel in a desirable location in the North of England, which I got. But when constantly reminded how lucky we were, trying to hide our resentment was like trying to disguise a yawn by smiling (which also happened). The trouble was, it was costing us all our time and energy and money just to merely be. Our wages were consumed by living, and the extraordinary prices to travel to nearby towns. And the occasional glimpse out the window really didn’t cut it. It was like Night of the Living Dead; except we were on the inside looking out.

As our summer contract neared its end, with money on our minds we begrudgingly applied for a dismal selection of hospitality roles churned up from the deepest darkest roots of UK Gumtree. We came to realize that there wasn’t a huge demand for hostel workers in UK winter, and so we decided to turn our mouse-pads to more exotic pastures. After all, they have hostels all over the world don’t they? Feeling slightly more optimistic (or it could have been the skin-full of G&Ts in exchange for the luxury of wifi) we sent CVs off to a handful of hostels in different counties before trudging back to our slightly more idyllic corner of myopia. 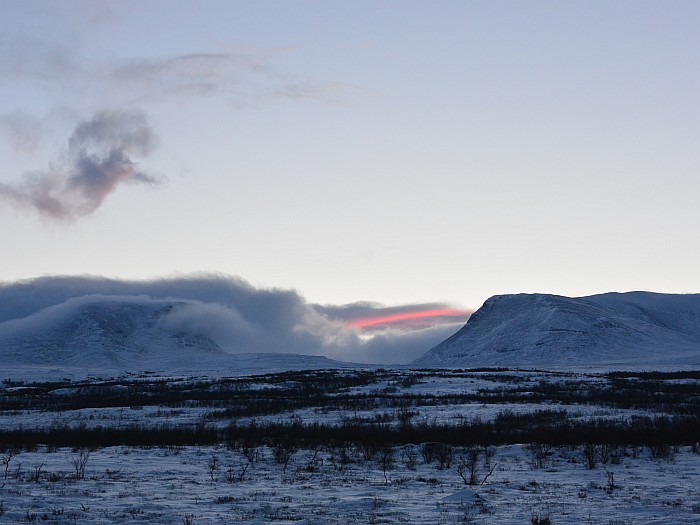 In the following days to our surprise, we received a mixed inbox of positive response. We were beside ourselves with glee! Would we be jetting off to the hot climes of SE Asia? Or the 2014 European Capital Of Culture Riga? Or exploring the illustrious culture of Budapest? Honestly! Thought I, what had we been doing for six months?! So after a couple of friendly Skype interviews we found ourselves Arctic circle bound to the most Northern part of Sweden reputed the best spot for one of nature’s most mysterious phenomena, the Northern Lights. 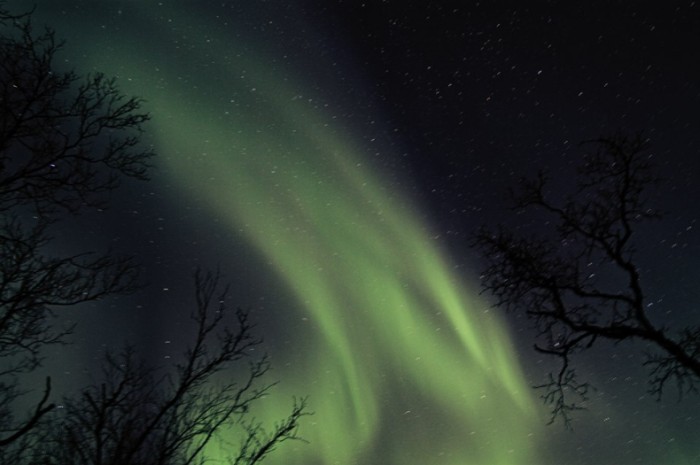 The hostel is a family run business on the outskirts of Abisko national park; very popular among travelers whose life long dreams include witnessing the magic of the aurora borealis. Our job roles are far from the exhausting artifice of chalet host glamour and simply involve cleaning the hostel, and looking after guests. A pretty sweet deal considering the rewards; an apartment in a wooden lodge style hostel with a view of the imposing Mount Nijoulla, and breath taking displays of radiant Auroras, the assistance and knowledge of local guides, and a modest sum of pay. Things that most people only dream about or pay excessive sums of money in order to reanimate their tired, automated existence beneath nature’s most wondrous of miracles. 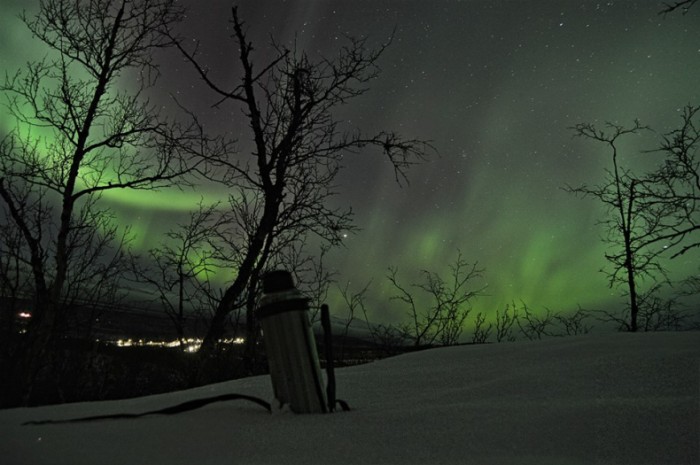 The first question on everyone’s lips is: how can we see the lights? We’ve taken to providing them with all manner of obscure instructions, like eating carrots to help them see in the dark, inventing coordinates that sound more like a crossword puzzle from a low budget magazine, to keep one foot in the lake whilst thrusting a magnet into the sky and chanting…you get the idea. The actual answer is, just keep checking the window. The lights are (as us honorary locals will tell you) entirely unpredictable. The only thing I can say with certainty that throughout the winter, they are visible most nights, at any time. Having been here two months I have bore witness to countless aurora shows (or at least two months worth) the majority visible through our window (hey it’s cold outside!). 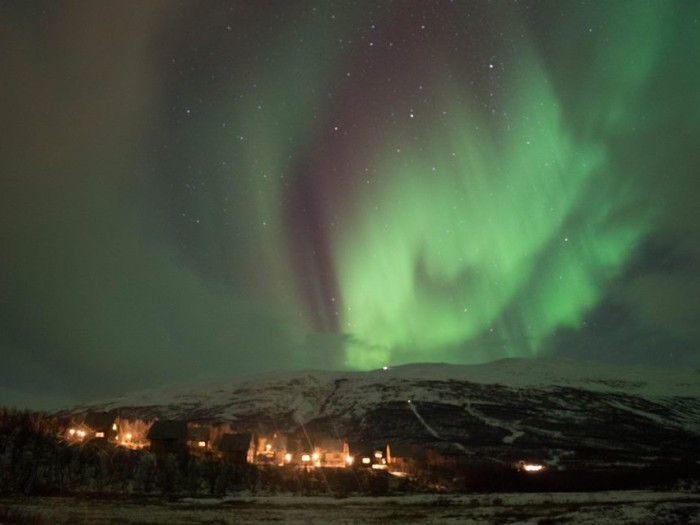 The lights haven’t yet failed to impress me, they appear mostly greeny-yellow, occasionally flecked with pink. We are all familiar with pictures of the Aurora but witnessing them first hand is an entirely new experience. What the camera doesn’t capture is their movement, or their epic proportions such that will probably provide the closest experience to an alien apocalypse in this lifetime. Sometimes movement is slight, though on a good night the colours fan out, ripple and snake towards you like a magic potion spilling across the sky. It’s no wonder that in ancient times they were linked to the mysterious work of deities or crossed over loved ones. The indigenous people of Lapland; the Sami, or Lapps, referred to the lights as ‘Revontulet’ which translates to ‘foxfire.’ Their legends tells of an arctic fox dashing through a snow drift, sending lashings of sparks into the sky. Unsurprisingly they have had their share of bad rap, when a rare sighting in London happened to coincide with the second world war during 1939, and also in Ohio 1941 on the day Pearl Harbour was bombed. Science has since primarily ruled out most people’s beliefs surrounding the lights but that does not stop the romantic notions and feelings of a more personal connection with this majestic phenomenon, reaching us from the sun. 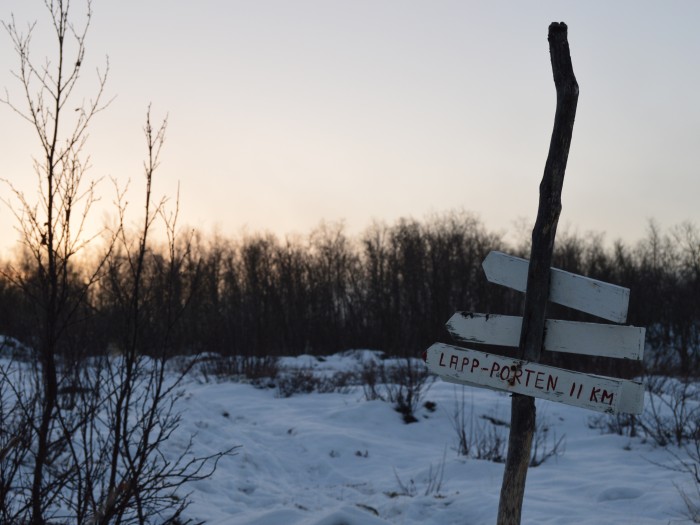 Of course the Northern Lights are not all this vast snowy canvass has to offer. Husky sledding is a an ancient way of overland travel, and to witness the looming mountains backlit by a pinky glow, wrapped in cloud like frosted cup cakes as you glide peacefully through the snow is a rare treat for journeyers alike. Other novel modes of transport include snow mobiles, sparks (little trolley like things you stand on and use like a skateboard) sledges, snow shoes, and of course skis. All these are a great and amusing way to experience the Arctic landscape. The national park is naturally abundant with winter wonders. The suspended cascade of frozen waterfalls and icy lakes offer an eerie beauty in which time appears to have stopped. Meanwhile reindeer herds, moose, arctic foxes and lemmings transcend the snowy terrain; unsullied as the secret lives they lead amongst the wilderness. 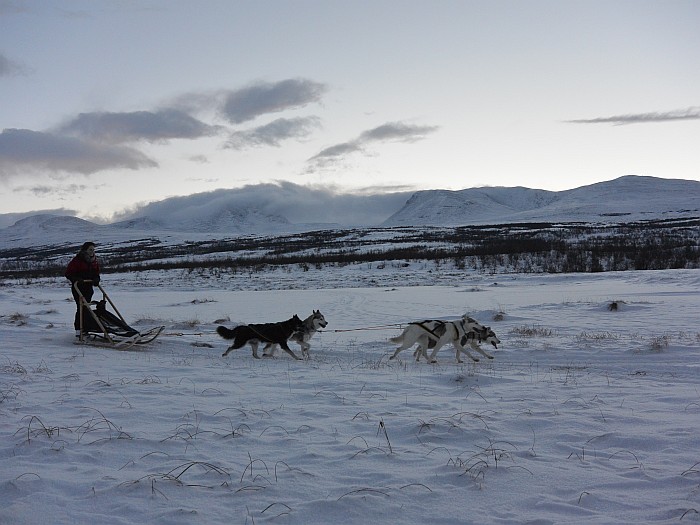 This is a place I get to call home for the next few months, a special place where beyond the brooding winter darkness, light from the distant sun still manages to warm our souls. And then who knows, maybe we’ll advance forth (or any other direction lest we find ourselves stranded in the impenetrable Arctic) to seek out some regular equatorial sun beams. The fact remains: the world is our oyster and we shouldn’t need a fortune to enjoy it.

One thought on “Beneath the Lights of Home”