The European Green Capital 2016 award was awarded to Ljubljana by the The European Commission. The Commission gives out this award annually as a way of promoting environmentalism and rewarding local authorities for rising up to the challenge of keeping their city green and ever more environmentally friendly. The European Green Capital 2016 award is a great result created by the initiative taken by 15 European cities, among which was Ljubljana. The idea first sprung to life in 2006, was taken into action in 2008, with the first award being given to Stockholm in 2010. The European Green Capital 2016 is, then, the 6th time this award has been given out. One of the reasons behind the creation of this award was for cities to be in friendly competition over which location is more environmentally friendly and thus inspire each other to take more steps toward a cleaner and a greener city, which would inevitably improve the citizens’ life quality. This idea is further demonstrated with the slogan, “Green cities – fit for life”. 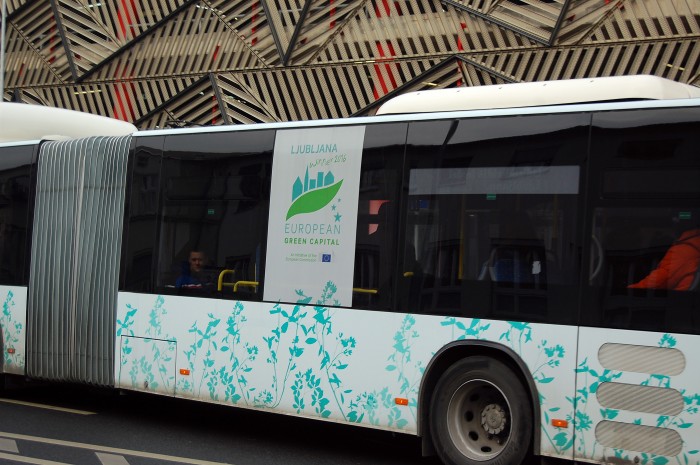 Shameless self-promotion: “European Green Capital 2016” written on one of the Ljubljana city buses

In recent years Ljubljana has taken many steps into becoming a greener city, which indeed makes it a deserving recipient of the European Green Capital 2016 award. Below are some of the reasons Ljubljana is becoming more and more environmentally friendly:

In 2011 the City Municipality of Ljubljana started Bicike(LJ), a public bicycle rental program, which consists of over 300 bicycles and 34 stations, spread all over the city. It costs only 3€ to be able to rent out these bikes for one hour intervals for an entire year. Tourists can be happy to know that they can do the same for a week, which would cost them 1€. The citizens of Ljubljana and its visitors alike seem to have welcomed this rental system, as there have been over 2.5 million rentals made since the system’s inception. 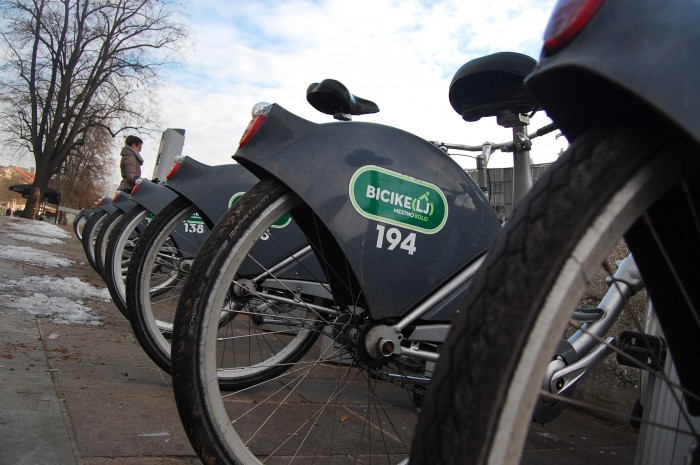 One of the many Bicikelj stations, which have no doubt contributed to Ljubljana being the European Green Capital 2016

Kavalir, which translates to “gentleman”, is a free shuttle service throughout the Ljubljana city centre. If you stand in one spot in the very centre of Ljubljana (meaning in close vicinity of the Prešeren Square), you will most likely see Kavalir drive by within a few minutes. Traffic in the very centre has been banned for a few years now so this area is now a pedestrian zone (cyclist are common too, although I’m not sure if they are actually allowed). Kavalir drives through this traffic-free zone but not to worry, it is incredibly quiet, not too fast and entirely non-disruptive. In keeping with Ljubljana’s green policy, Kavalir is an electric vehicle. In the summer it usually looks like a slightly bigger golf cart but appropriately enough, it has been made to look more like a mini bus for the cold winter months. 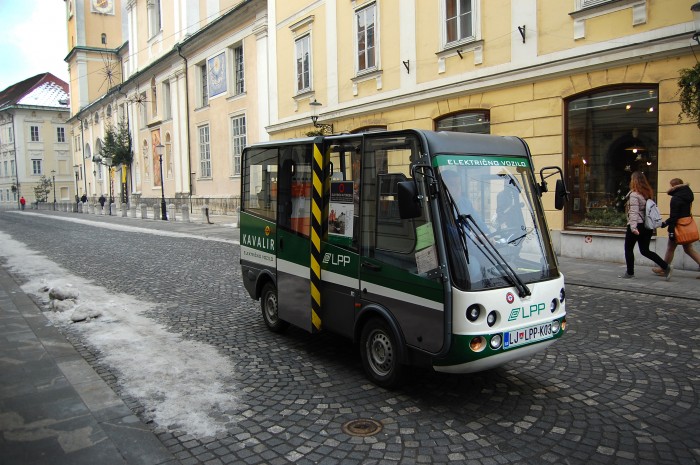 City Parks and Nearby Hills

Look through any window in Ljubljana and you will most likely see a mountain or a hill, as Ljubljana is surrounded by them. Not all of these are explored only by adventurous outdoor enthusiasts, however, as plenty of them are very easily accessible and are perfect for an afternoon stroll. Hills such as Rožnik, Golovec and the Ljubljana Castle can all be climbed in 30 minutes and on the top they have various attractions to see: The Ljubljana Castle, a church on Rožnik’s summit and an observatory on Golovec.

Ljubljana is also rich in city parks, with the biggest and most visited one being Tivoli Park. Other parks include Kongresni Trg, Navje (the Northern City park) and various areas alongside the Ljubljanica river.

There are plenty of colorful recycling bins all over the city, which I think is a great idea and a good way of encouraging recycling on the go. The trick with these bins is to figure out which side opens, how it opens and overall how to use it. This might just be me but I’m really missing a user manual when it comes to these recycling bins. A good idea though and certainly one that will contribute to European Green Capital 2016. 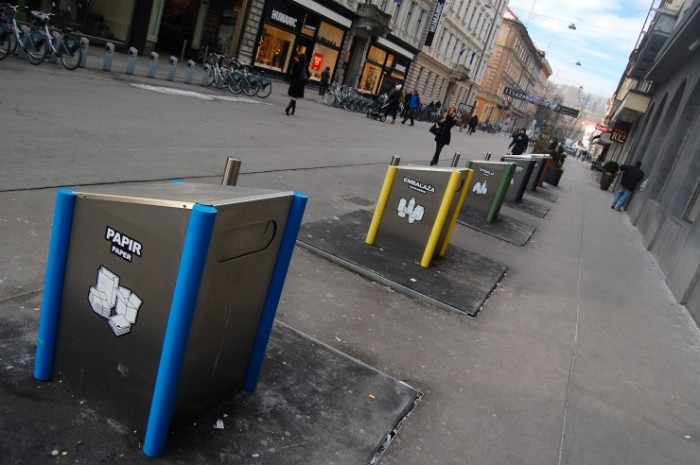 The botanical gardens in Ljubljana are part of the University of Ljubljana. These gardens are the oldest of their sort in Southeastern Europe, having been established in 1810. They cover an area of about 2 hectares and are said to contain 4500 plant species, among which more than 1500 are endemic to Slovenia. It being January, the gardens aren’t much of a sight, as most plant species can’t survive the winter. The good news is that there is also a tropical greenhouse, which is brand new, as it was only finished in 2010. It contains 350 plant species from America, Asia, Oceania, Australia and Africa. What I liked most about it is that there are two levels from which you can view the plants. Viewing a banana tree from up top really (and quite literally) puts it into a different perspective. Also, it smells great in there! 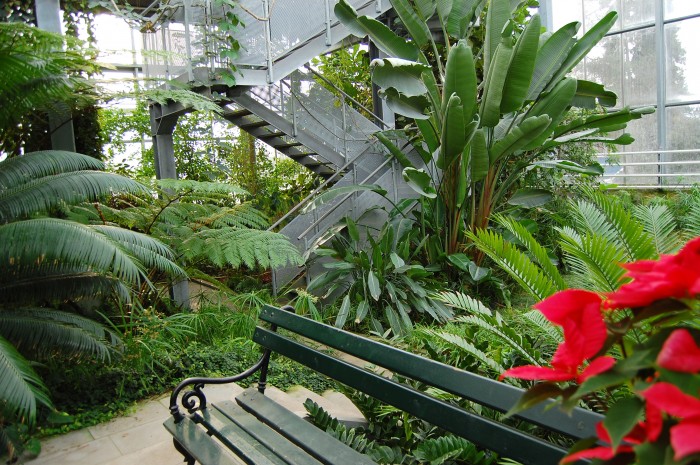 View from the entrance of the Botanical Gardens 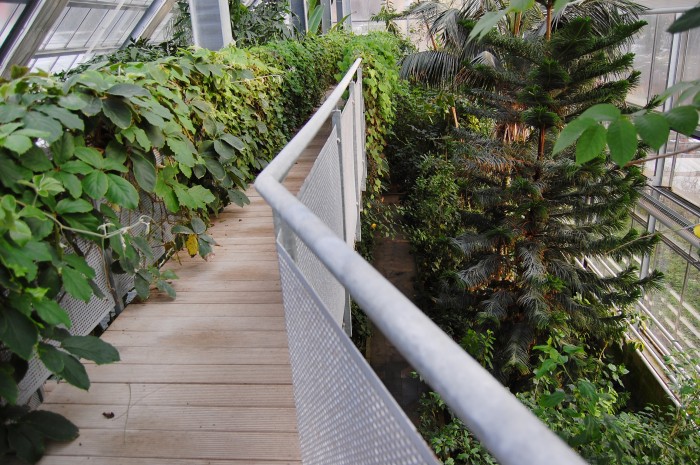 On the viewing platform