Above the medieval town enclosed by magnificent walls, the sun begins to rise, right there over the east side where a trail leads past the old port through the Ploče Gate. In Dubrovnik the day starts early, and the air is fragrant with morning coffee and freshly baked croissants. Inviting scents linger across the ancient paved avenue rebuilt in 1667, the Placa or Stradun as the Venetians named it in jest, and in Orlando’s Café everything is ready for a delightful cappuccino. 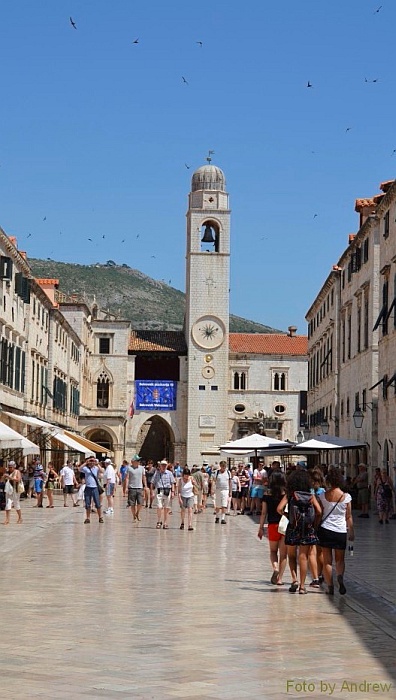 The Stradun (Placa) avenue, in the background the City Bell Tower with the Green Ones and the front of the Sponza Palace to the left

A stone’s throw away, at the Gundulić Square marketplace dedicated to 17-th century poet Ivan Gundulić, street peddlers are already selling baskets of plump strawberries, sun basked apricots and dried oranges. Their hands are worn and their eyes sleepy, but they smile with affection as they offer homespun napkins, sheep wool socks and sweet-smelling lavender bags.

By the splendid Gothic-Renaissance Sponza Palace, one of the town’s many captivating structures that was built between 1516-1521, the City Bell Tower is ringing. Two bronze statues, bell-ringers known as the Green Ones, strike the great bell every hour.

As the hot summer sun starts climbing the sky, the narrow alleys invite you to dive into their cool refuge, whispering stories of their own. Before you know it, they’ll take you on an unforgettable journey across the creepy dark ages, the flourishing Renaissance and the prolific Baroque. The smell of aromatic herbs, freshly-washed sheets and new leather gives Old Town a truly unique, charming atmosphere. 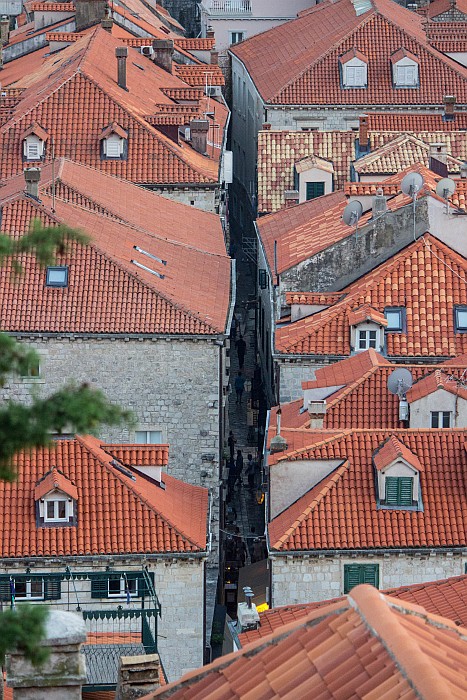 Time and again, it will surprise you with its cache of priceless historical and artistic treasures. The eye is easily drawn to the Church of St. Blaise from 1714, a wonderful Baroque building that stands as one of the town’s most precious artifacts. It is dedicated to St. Blaise, the patron saint and protector of Dubrovnik – his statue, carrying a scale model of the town in its left hand, is made of gilded silver. Legend has it the saint died a violent death defending the gates, which adds a chilling sentiment to the figure reigning above the great altar.

In the southern part of town, a monumental Baroque staircase ascends up to the Bošković Square, where the main attraction is the impressive facade of the Church of St. Ignatius. The Jesuit church, finished in 1725, is regarded as a masterpiece of Baroque architecture. Painted with dazzling Baroque frescoes depicting the life of Saint Ignatius de Loyola, the founder of the Jesuit order, it is simply a breathtaking sight. 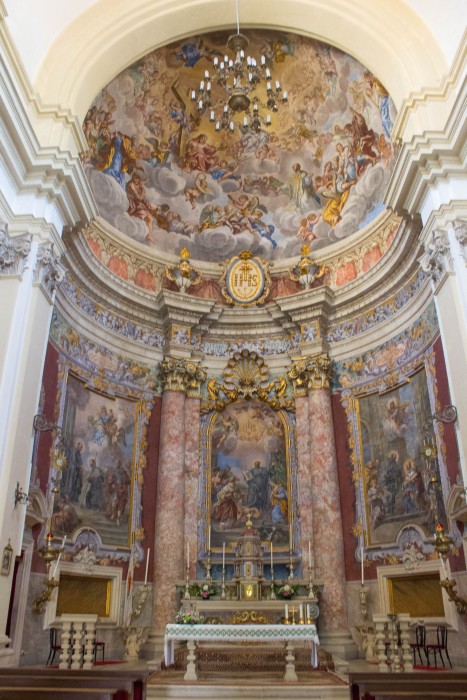 A few turns later, your gaze will undoubtedly pause on the Big Onofrio’s Fountain in the centre of the Miličević Square. In 1438, the great cistern was built by the Naples architect Onofrio di Giordano della Cava as the ending point of the town’s aqueduct system. Protected by the mighty Renaissance-style vaulted Pile Gate to the west, since 1460 the main entrance to the city, the glorious fountain has been a meeting place of merchants, travelers, politicians and mavericks for over five hundred years.

Just a couple steps removed, to the outside of the city walls, the restaurant Dubravka 1836 invites visitors to savor simple yet delectable Mediterranean dishes. Encircled by three mighty forts, Minčeta by the foot of Mount Srđ, Bokar by the Adriatic Sea and Lovrijenac on the nearby slope, it offers a vista to behold. The ships sailing past bring back memories of times when this was a crossroads of vital naval and trade routes. The air is pleasant and relaxed. The day is young, and the city calls for exploration. 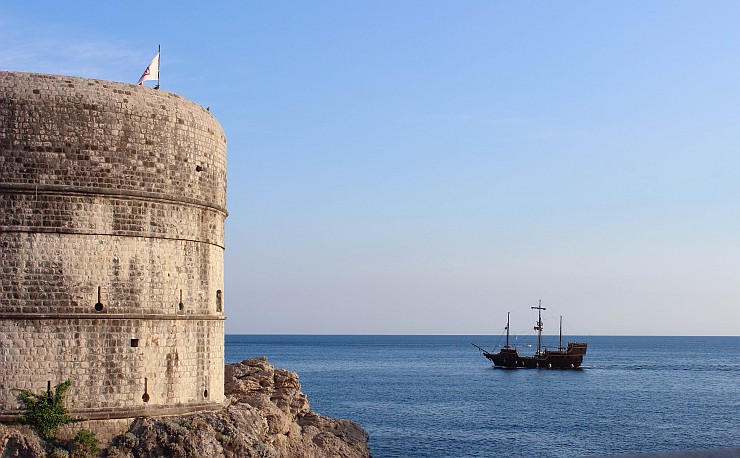 The Bokar fort at the intersection of old naval routes

Heading onward, the way will lead you to the “hole in the wall”, a narrow stone passage through the city walls. On the other side, you’re treated to a boundless view of the serene Adriatic sea crowned by an azure sky, and in the east the beautiful island Lokrum with a lush botanical garden famous for its collection of cactuses, agave and eucalyptus trees. Steep stairs descend the cliff down to the Buža bar, resting just by the sea. Here, time stops for a few moments, and the mind is cleared of worries and doubts, surrendering to the sublime images offered by the surroundings or perhaps deciding to hop from the rocks straight into the sea. In pleasant company, enjoying good music, a cold beer or a glass of choice wine, you’ll surely wish this day would never end! 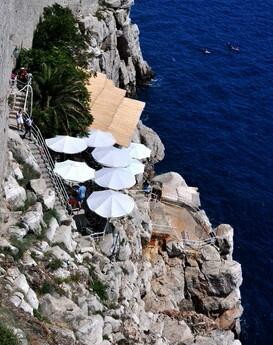 When afternoon lazily turns into dusk, it’s the perfect time for a stroll along the 1940-meters-long Dubrovnik Walls. The mighty fortifications rise 25 meters high, reinforced with towers, forts and ramparts, and embody the very essence of strength. Since ancient times, the walls have protected the little town and kept it safe. Truly, from here, it appears unconquerable. Reaching the top, though, where horizons open up an all sides, the little town acquires an aura of magic. Fresh winds scatter the last veils, uncovering all the secrets of its opulent past. 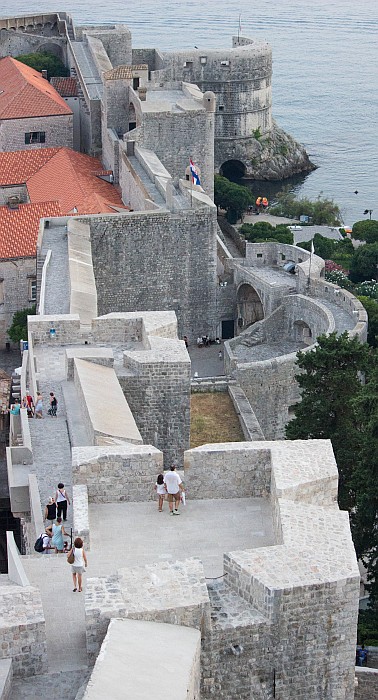 Majestic walls, sight from the Minčeta fort towards the Pile Gate in the west and the Bokar fort by the sea 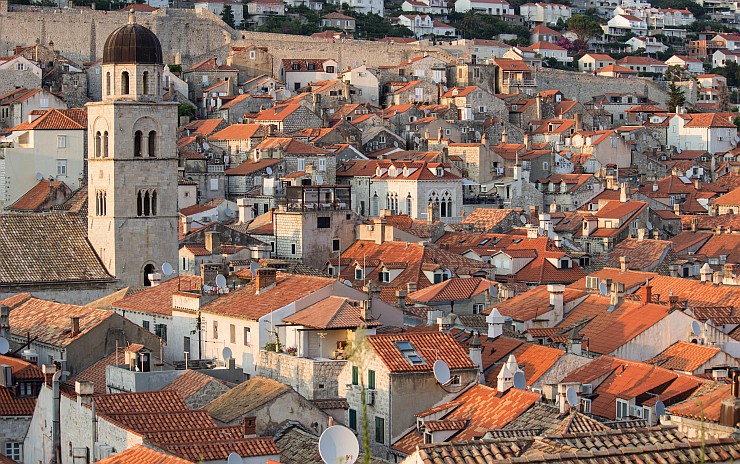 From the top, you can see it all. The Franciscan Monastery, the Synagogue, the Church of St. Sebastian

The sun is slowly setting, drawing shadows across the roofs of stone houses. It is then that the town can be seen in the prettiest light. At the pinnacle of its development, Dubrovnik has become a town of serene lifestyle, Mediterranean ease and cultural richness. The amazing artistic feats of architecture, poetry and literature have all left an indelible mark on this jewel of the land. 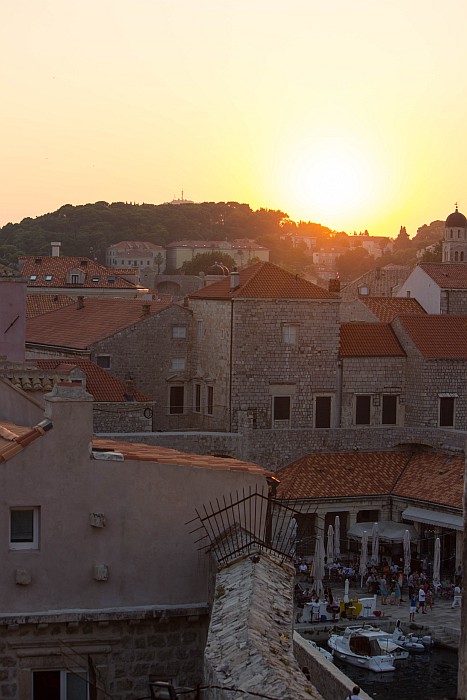 Where the sun sets down

Sleepy, the town prepares to rest. The music of renowned classical composers, ringing late into the night in the lovely setting of the Rector’s Palace, slowly quiets down, and the flock of swallows fluttering above the promenade has bid their adieu. It’s time to say farewell to all the saints, architects, poets and heroes, too.