After last year’s working experience on a sailing boat, all of a sudden I had the chance to start working on a motor yacht with a new crew. Even though I made all my plans for this summer on my previous boat, things turned out unexpectedly and I found myself on a totally different boat with a different crew. Working at sea might be quite fun, adventurous but also challenging from time to time where the crew really matters, as it also means a team work. At the process of changing my boat, all I felt was uncertainty and I couldn’t help focusing on  ”how the new boat will be”. All in all, all my fears and worries were invalidated and I found myself at a very happy and comfortable place. All I should have been feeling was just to enjoy the moment and being impatient to see the new Greek Islands that I didn’t see before.

Leaving Marmaris harbour early in May, until the beginning of July (I still hardly believe that how the time passed quickly and we are already in August), it was a non-stop tour for me where I was busy everyday and tired but also energetic and enthusiastic when it comes to see all the beautiful islands that we have been to.

Apart from working hard from morning till night, to be on board is mostly fun. Between the islands, I enjoyed the long cruises at the very most. Day by day, I came to understand the importance of working on a boat/being on the sea for my life and future. Already now, I can say that witnessing the sea in all aspects helps me transforming many issues both in my life and character. Thats what traveling does to one, doesn’t it? However, I have to admit that I set traveling apart from being on the sea. When you travel, it is really hard to feel belonged to somewhere. It is like you don’t have a certain place/house and everywhere you go, traveling itself is the main certainty and all the rest is just an unknown to you. Well, the sea itself as well full of uncertainty, however, I feel really happy when I’m at the sea. Furthermore, the sense of belonging I told I have, is not the kind of a belonging to a person, objects or property. It is something totally makes you mingle with the life more freely. I assume I need to be brief about the effects of the sea on me. I can not finish telling it all in just a few pages.

Last summer, I saw many islands of Greece from Santorini to Corfu where I had one of the most amazing times of my life. This year as well, I keep going  expanding my horizon on Greek Islands. With every approach to the port, I have the uncontrollable excitement and leave with deep-seated emotions. Of course not only the islands themselves are gorgeous but also the turquoise coasts, deep blue seas, seagulls, free dolphins and many more spectacular views are easy on the eye. 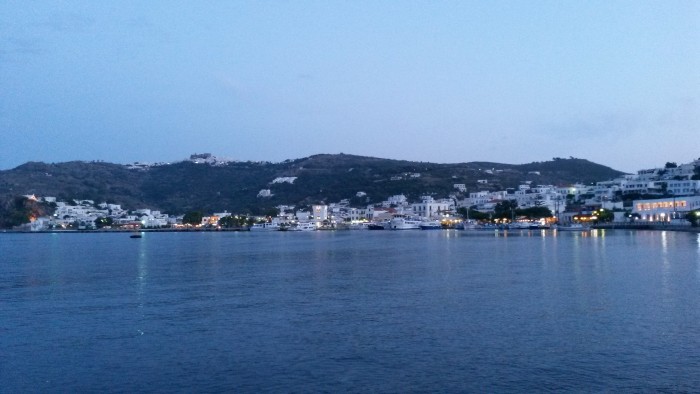 Patmos, one of the northernmost islands of Dodecanese

Another new island that I have been this summer is Samos. Just my luck, the boat harboured about a week and I had quite a lot of time to walk around and discover the city a bit. Samos is in the south of Chios and north of Patmos, hometown of the ancient mathematician and philosopher  ”Pyhtagoras” of Samos takes his name from this island. Pythagoreion, southern city of the island, quite small and home to many ancient Greek and Roman monuments and an ancient tunnel. However I didn’t have the chance to see the tunnel, as it was temporarily closed due to a reconstruction. Instead, I went to the Pythagoreio Archeological Musem in which there were quite a lot of monuments that were dug out from the island. Samos wine is also another well known in antiquity and is still produced in island.  Walking around the city, with its beautiful, colorful views and photographing the white coloured stairs in flowers were so much relaxing to me. 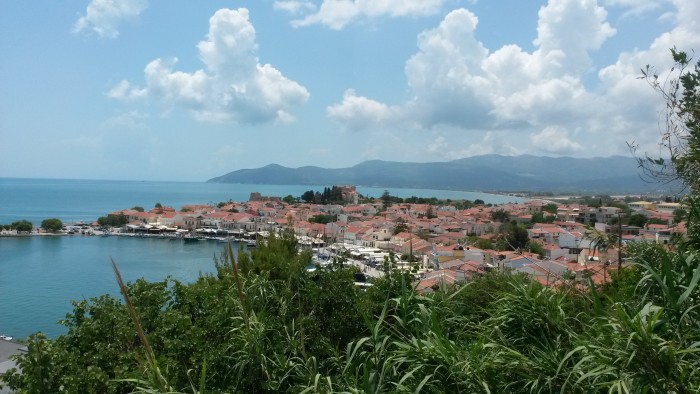 View of Pythagoreion, Samos from uphill 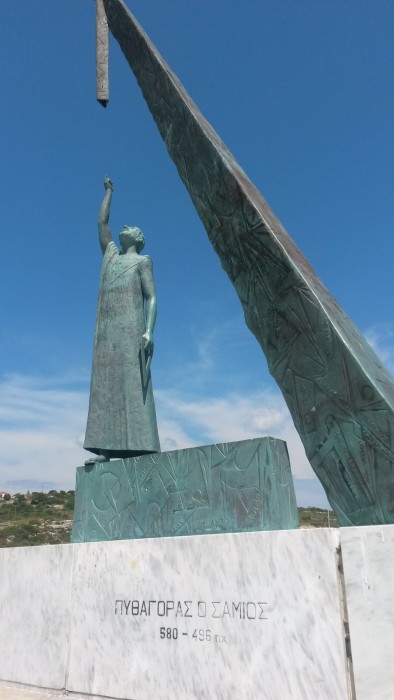 statue of the Pythagoras at the harbour.

We left Samos to arrive at Skiathos. Within that time we stopped at Patmos again, Mykonos after and passed through South and North Euboean Gulf, where also there was a drawbridge at Halkis. There were many dolphins both in South and North Euboean Gulfs which i was really excited to see. Again harbouring around a week, I had a really nice time in Skiathos. Thanks to our kind captain who took us to discover the city by car, I saw wonderful beaches where the sand was star dust like. Skiathos International Airport is another tourist attraction with its interesting location. Everyone can watch a plane land on and take off. On the other hand, one must be really careful when the plane is preparing to fly, working the engine really strong, it blows really really strong that you may fall or have sand in your eyes or mouth. We experienced that and we just laughed so hard as we couldn’t think of it and were just behind of the plane just before it took of. Fortunately we took the videos and will remember the moment for a lifetime. Skiathos has many nice beaches where you can spend your days for a relaxing holiday. Koukounaries beach is one of them with its soft, light-yellow sand. On the way back from Koukounaries, we stopped by Paraskevi beach which is another magnificent beach with its view. Another well-known beach, which you can visit by a boat in a day trip is Lalaria beach. Skiathos was another Greek island that I was happy to see and enjoyed a lot that time just flew away. 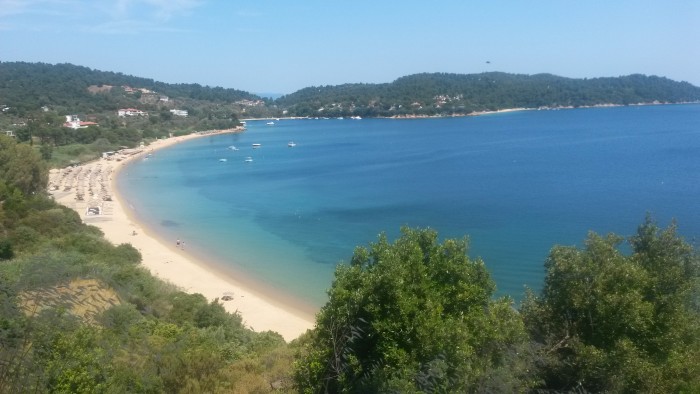 Leaving Skiathos which is quite in north of Greece, it took us time going back. Seeing the drawbridge open, and gliding with the strongest current, where everyone watches the boats passing through the bridge, it was the beginning of the list that I saw in joy. Leaving the arete of Amorgos behind, we arrived at Paros where we harboured for a couple of days.  When you live on a boat for a couple of months time, it is highly important to step on land and leave your body’s accumulated energy to the ground. Therefore, walking is the simplest but most important activity for those who work on board. The second activity is to take your camera with you when you go for a walk (: 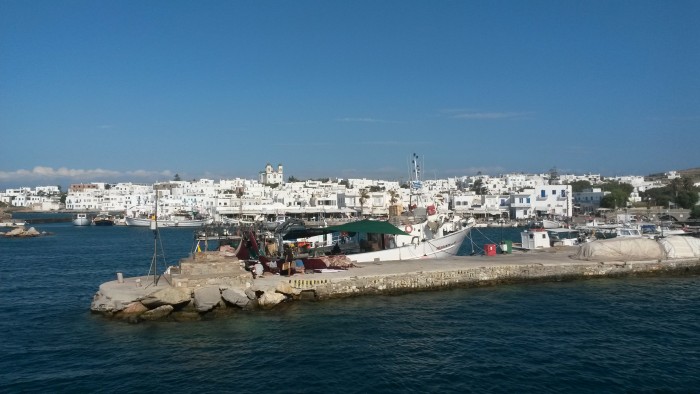 Fortunately, I had a break in the middle of the season, relaxed a bit. I’m ready for another 3 months of trip. By autumn, I will surely have lots and lots of photos and many more islands to see just makes me more excited. 2015 summer was an unknown to me yet it continues with beauties that i cant wait to see. 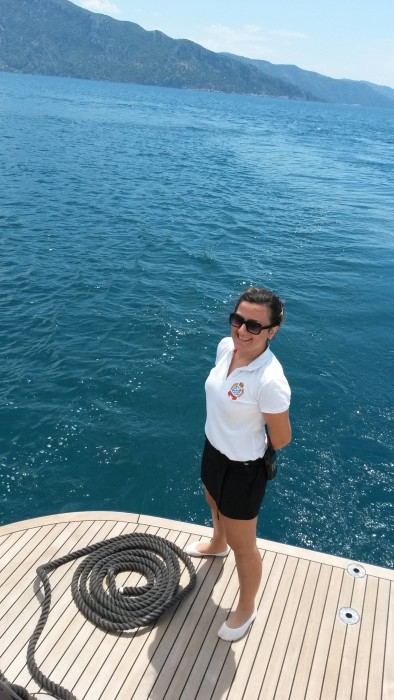