A week before my visa expired, I decided to go to another Greek island, this time  which is  a bit closer to me on 7th February, 2015. Thanks to my job on a sailing boat, I had the chance that not many people have, that is to see a great majority of the Greek Islands within two years time. Visiting Kastellorizo on the other hand, in the middle of the winter season and especially without the boat that I work on, it totally felt different.

On a rainy Saturday, I woke up really early to catch the first bus that goes to Kaş, another coastal town of Turkey that lies on the south. It was roughly an hour and a half trip to Kaş and on the road, it started raining heavily. When I started to think whether I was doing the right thing or should I have rather stay in my bed, we already arrived to the bus station. 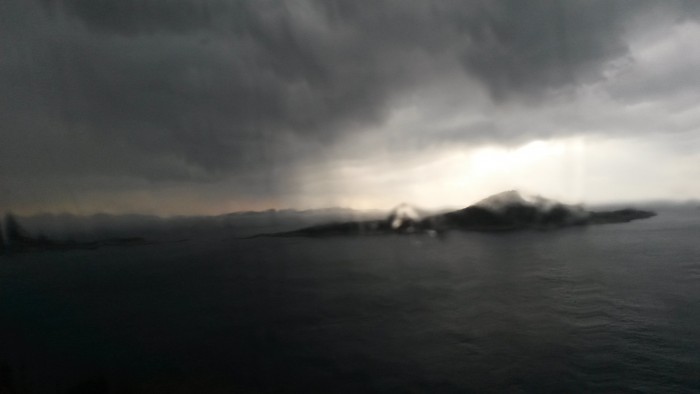 On the way to Kaş, when suddenly it started to rain. February 7, ’15

Kaş is a pretty small coastal town. It is lying on the most western part of Antalya. Being a touristic place, when winter comes, it gets  totally tranquil. It is a really important spot for diving and attracts many divers in the hot season. Just like Fethiye, It has a few ancient places within the Lycian route, known as Isinda, Kandyba, Apollonia, Myra, Teimiussa, Symena and many others. Known as Antiphellos in ancient times, Kaş was the centre of the Lycian civilization. Moreover while in Kaş, one must definitely visit the sunken city, in local language ”Kekova” island near Demre ( another Lycian town known also as Myra). It will take your breath away to see the sunken ruins and the view of the area is simply amazing that i barely find the right words to describe it properly. I had the opportunity to see the beauty of Kekova in summer 2014. Even swimming offshore Kaleköy ( Symena) , seeing a Lycian tomb in the sea made me feel like i was swimming back in ancient times. 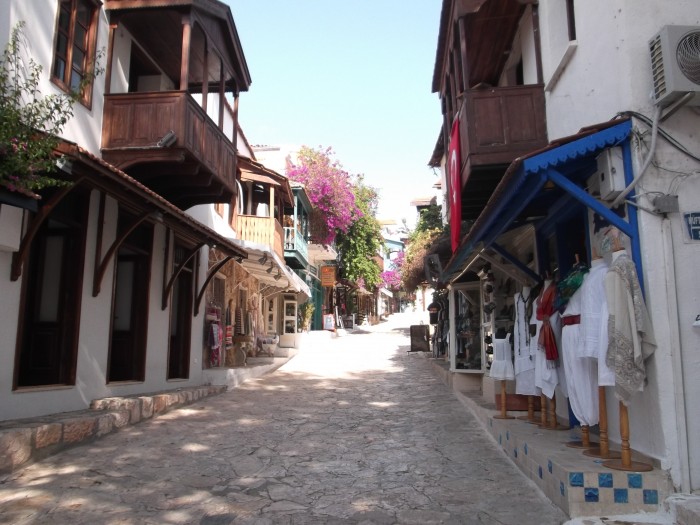 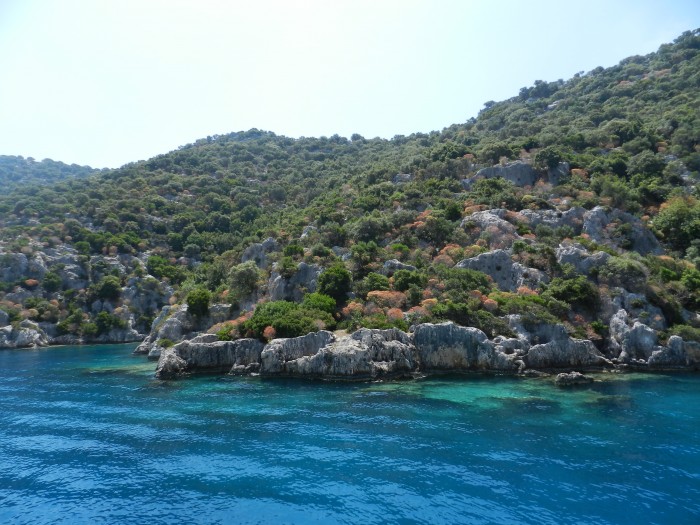 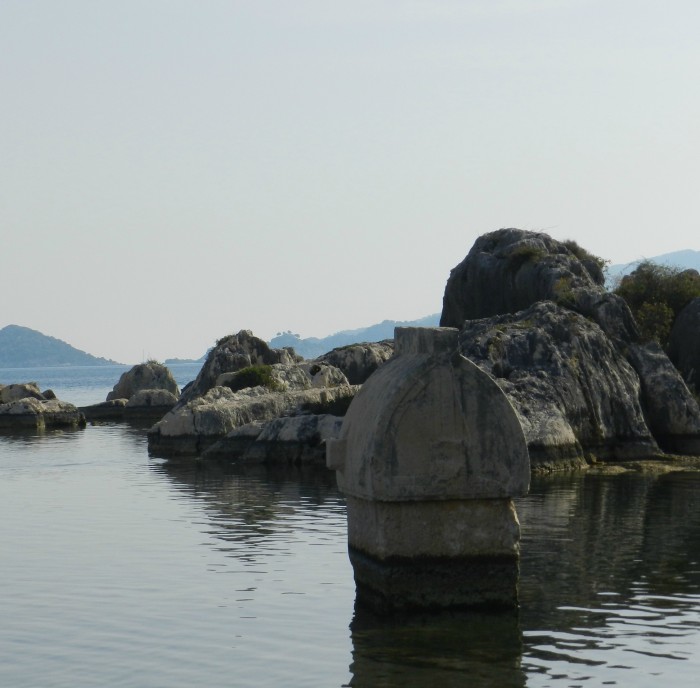 Lycian Tomb offshore in Kaleköy ( also known as Symena) in Kaş. May 2014

Let me get back to the day that started with rain. Leaving the bus station behind me, under the pouring rain, I was looking for the agency office which I called earlier. I hadn’t asked for the address, I only knew it was the only agency that runs a ferry to Kastellorizo once in a week in winter time. Using my logic and being an Aegean, I did what I know the best: walked to the marina, which is the center in every coastal towns/cities. Luckily, I soon saw a group of people waiting in front of a small office and I arrived just 15 minutes before the ferry left. 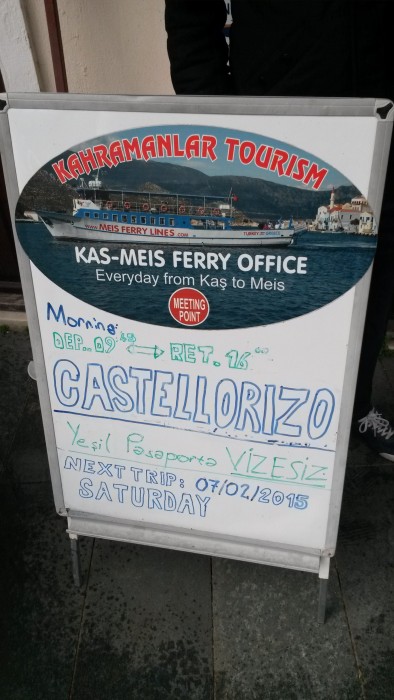 sign in front of the agency office. in high season, tours are held everyday 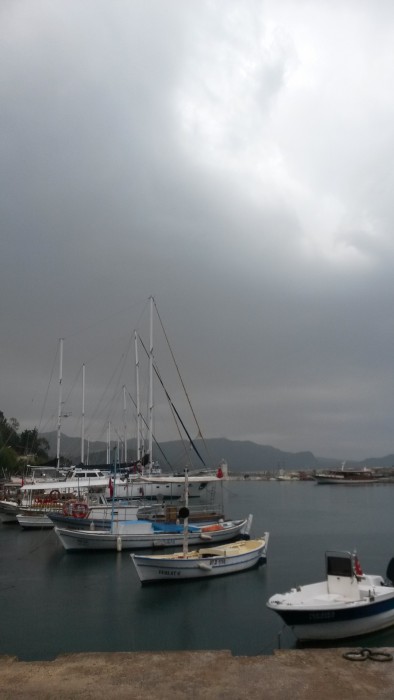 it started with rain and then became sunny. at Kaş Marina

Thinking that I wasn’t the only one who wasn’t lazy to do the trip on a rainy day, there were about 40 people in the ferryboat. It took about 40 minutes to get to the island, meanwhile the weather totally changed and the sun appeared. I thought luck was with me that day. Kastellorizo meaning “a Red Castle” in Italian (also officially as Megisti in Greek, Meis in Turkish) is  also known to be  the closest Greek island to Turkey, is the easternmost Dodecanese island.  While the ferry was approaching the dock, there was a familiar landscape and feeling to me which I love the most when inbounding. 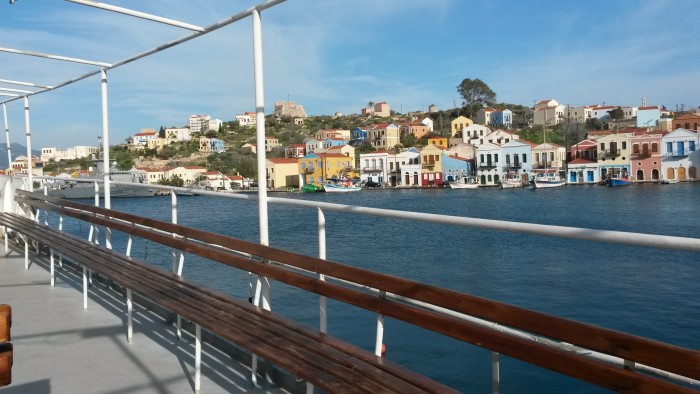 that familiar landscape while docking in every Greek island.

As soon as we arrived at the dock, I jumped off the ferry and let my legs go wherever they take me, as I always do in Greek islands. I started to take photos of the cute buildings that were painted in the most beautiful colors, which is architecturally an absolute must  for  the most of the Greek islands. During that time, I was visiting the small museum which is inside a former mosque that was made in Ottoman time ( second half of the 18th century), restored and reopened in 2007, there I did learn a couple of information about the history of the island. Also I learned that the population of the island is less than 500. Moreover, If i find the chance for the next time, i absolutely would like to see the famous cave in the island known as the Blue Cave or Kastellorizo Cave. As far as I’ve heard it is quite interesting and worth to see. However, I’m sure summer might be the best time to do so, as you can also swim. 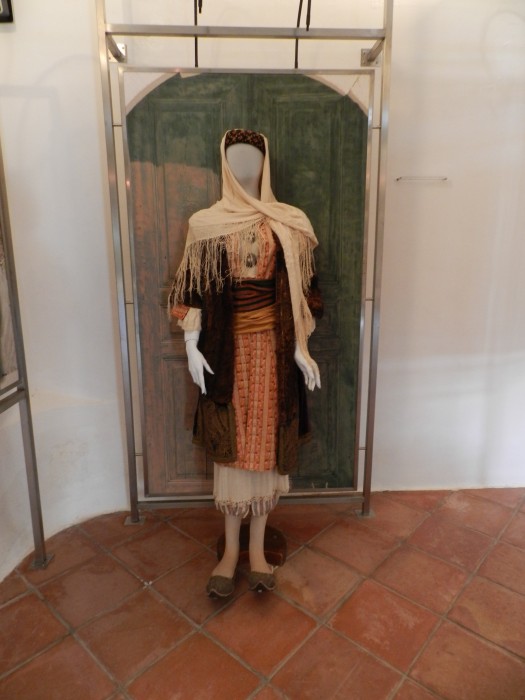 Local dress of women in the museum of the former mosque

Local dress of men, in the museum of the former mosque

After I was finished with the museum, I decided to reach the highest part of the island, as much as I could walk to get a better view and shoot, yet i didn’t regret it at all. Hearing local people while they are talking or shouting each other around, I have always felt a little ashamed, thinking that we are so close to each other yet I don’t understand even a single word. (Of course there are many Greeks who are living in Turkey and many Turkish who leave in Greece). However in my case, I never thought of learning Greek before my job on the boat. Known as ”Komşu” ( which means neighbour in Turkish and referred to Greece), Greek culture has been always way too familiar to Turkish as for the cuisine, clothes, warmth of the people, sweet rush of the daily life and so on, there has been much history together on the same lands within the ages. 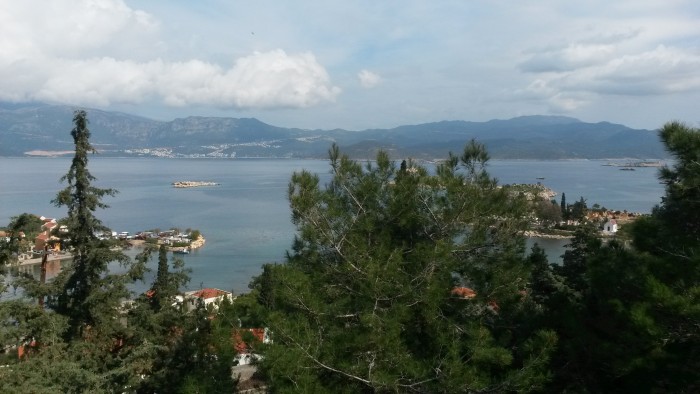 from a high spot that i went on foot. Kaş can be seen just under the clouds at the left side.

When I felt I took enough photos, I began walking down the hill. It was just the moment I decided to sit by the sea and have the conventional thing to treat myself: Greek salad, fried Greek cheese (Saganaki) and Greek beer ( Mythos). Even if there was a cold breeze, the sun was warm enough to help me finish my lunch. I would like to indicate that I didn’t choose to sit where the rest of the people from the ferry sat. Instead, I sat at a restaurant where there was no one (just before the dolphin sculpture in the sea by the stairs on the way to the mosque) and the waiter was elderly and hearty, was the kindest to warn me, not to put my phone at the edge of the table, in case it might  fall into the sea. He was such a considerate man I will never forget. 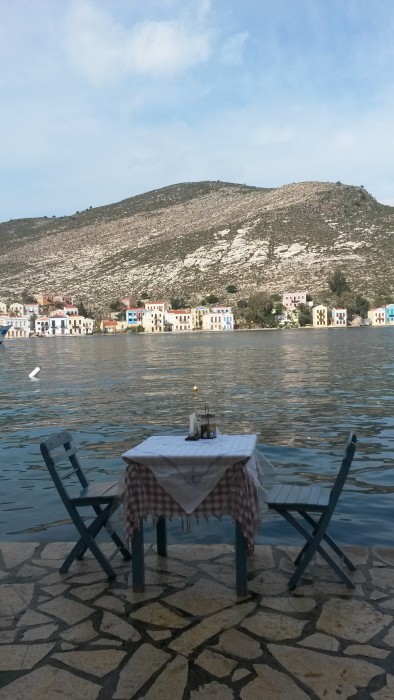 the place where I’ve decided to have my lunch 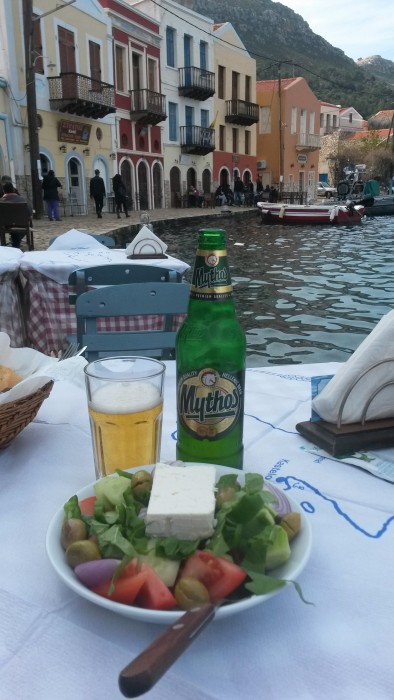 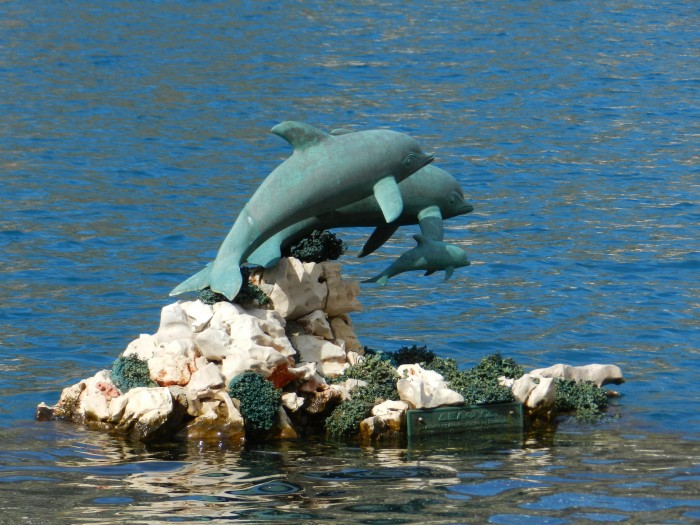 the dolphin family sculpture by the stairs at port

After deciding to see the other side of the port, I just kept walking and taking photos. Maybe feeling a bit sleepy after the meal or the warming sun, I wasn’t sure about the reason, and I even took a nap lying on the stony garden of a closed hotel by the sea. Fortunately i could wake up and wasn’t late for my luck before the ferry left. 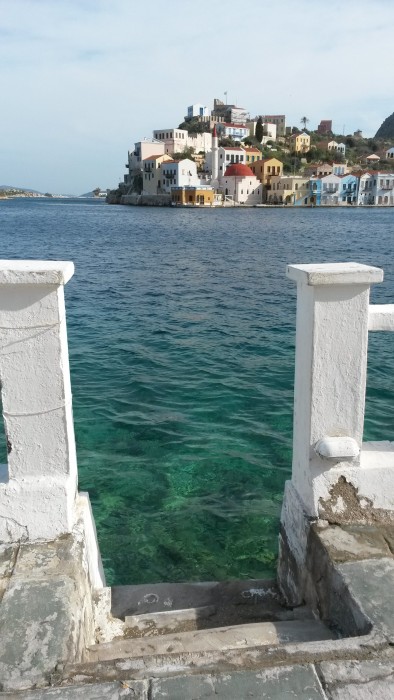 the place where I took my nap

On the way back, I sat at fly bridge in spite of colder wind, by covering my head with the hat of my coat. When I was looking at the choopy sea, I was thinking about which another Greek island would be the next and when to see it. Overall it was a lovely day-trip that I ended in full of thoughts and the relief of completing something in solitude made my day. 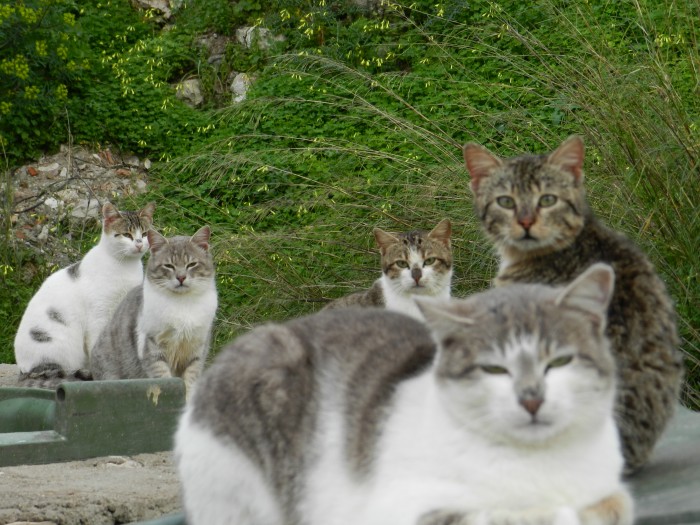 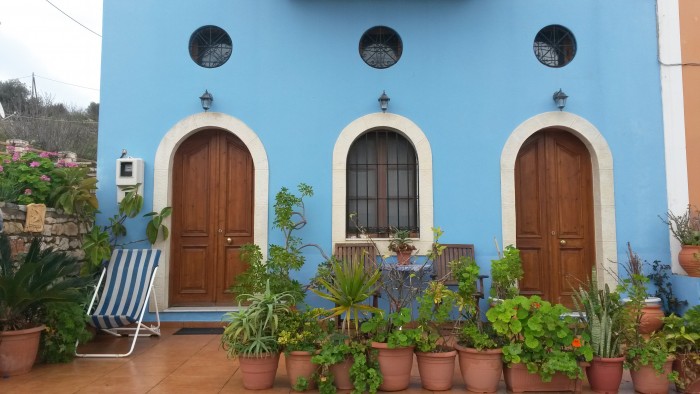 panorama of the port

Salute to the Solitude from Kastellorizo
Rate this post