Just after the training course finished, me and two more friends whom I met at the course, decided to make a trip to Skopje (FYROM) and then Belgrade (Serbia). It would be really pitty if we would have returned to Turkey without seeing neither of those closer cities to Kosovo. It may be always advantageous to kill two birds with one stone.

Having the bus early in the morning from Pristhina bus station, it was still dark and until we reached the Macedonian border it was all misty. As soon as we arrived to Skopje, we bought our tickets for Belgrade for the night. 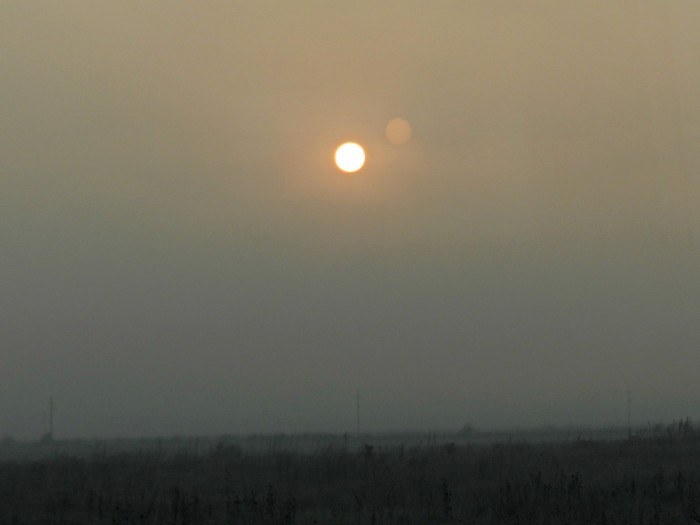 Foggy weather on the way from Prishtina to Skopje 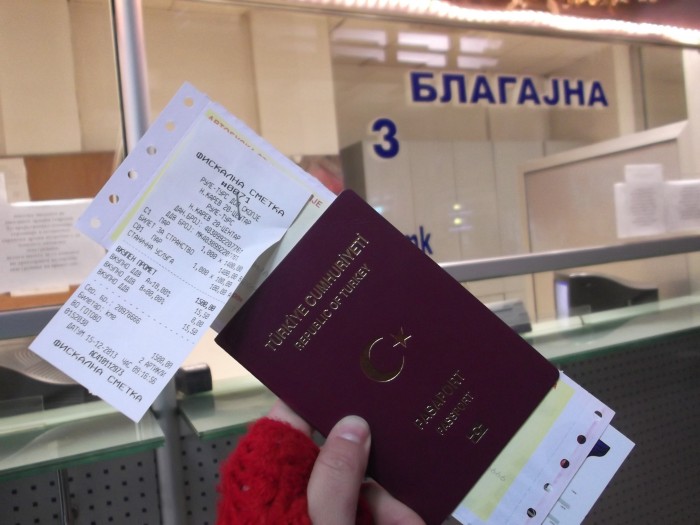 Choosing to walk to the center, we were slowly discovering, while we were looking around with curiosity in our eyes. Even just before we got the center, seeing many sculptures in such a small area really took our breath away. The center of Skopje was simply an open museum. I have never seen so much statues and sculptures in my life by then. When we thought we needed to warm and collect our thoughts a bit, we sat at Cafe Drama which was really good. Charging our cameras to the fullest and warmed ourselves, we started to look for something to eat before we starved. Arriving on Sunday and really early, not so many places were open yet. Thanks to the only cafe that was selling some proper food to eat, we sat at a park near Porta Macedonia. The nicest thing about being in a totally strange place, is that when you don’t know anything about it and don’t know where to start and something comes up. Just  when we finished our sandwiches, we saw a city tour bus right in front of us. It was a time-lapsed tour but was quite informing that i couldn’t even imagine to have. It helped me to get a quick and well image of Skopje. 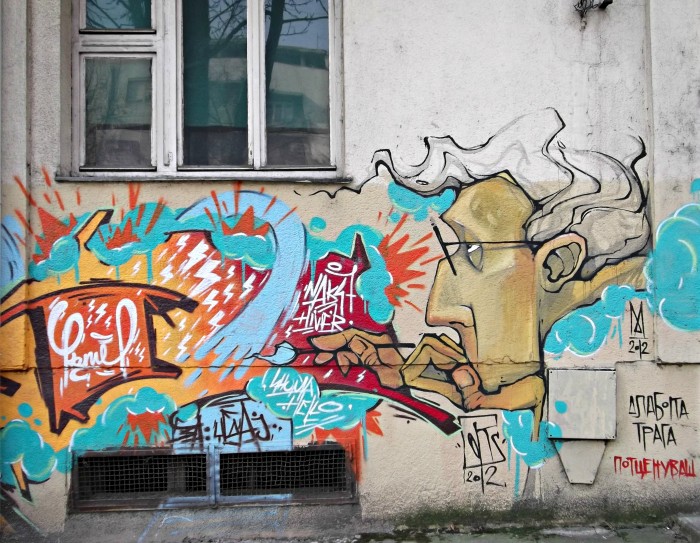 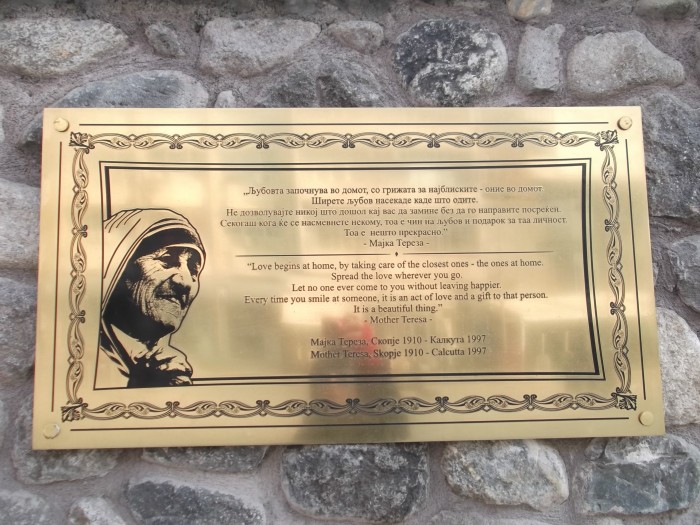 As the time went by, it was getting colder and colder, yet we weren’t seeking a break. Without losing any time, we were walking around, seeing every corner and getting the best view of Vardar river, where the newest buildings were rose by. Arriving at the Old Bazaar, I had the best stew beans in my life, I didn’t taste something like that, not even in Turkey. If I would have to suggest someone while they are in Skopje, it would be their not leaving without eating stew beans. 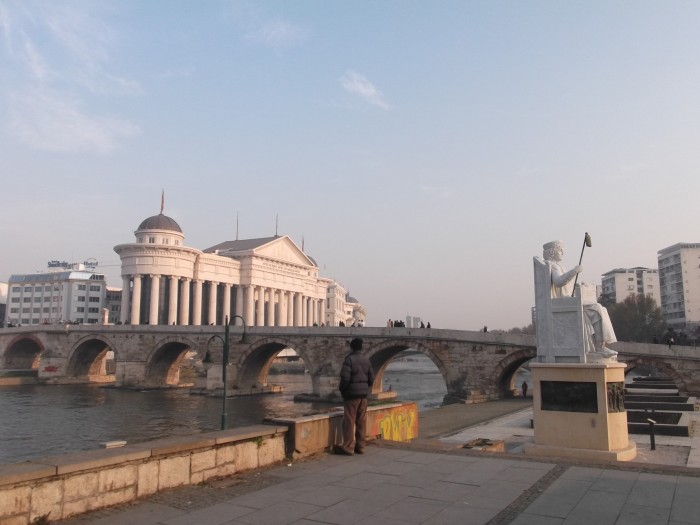 Stone Bridge on Vardar River with the latest built statues and Government buildings by the river.

When the sun went down, fortunately we had the opportunity to see the beautiful Skopje under lighting. It felt like the square was the living place of sculptures as well as people. As taking photographs all day caused discharged batteries and the weather  getting really cold,  we took a break at the Irish Pub where I felt myself sheltered, because it was a looong day outside. Finishing a day trip in Skopje, I was enthusiastic even thinking of Belgrade. I could never thought sleeping in a bus actually can be very comfortable, after the exhaustion of Skopje. 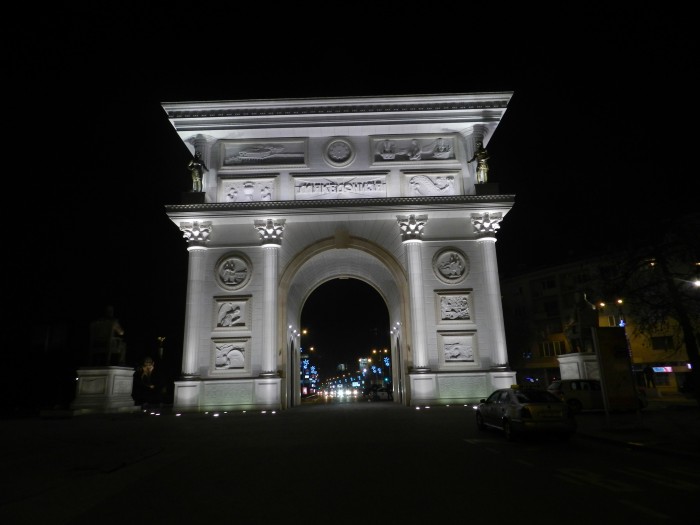 We arrived Belgrade in sleet and slush at dawn. It took us a while to find our hostel at Zagrebacka Street (Hostel Inn Downtown). It was inevitable to get some sleep for a couple of hours, before we swaying from side to side in the city.

After the confusing Macedonian denar, I couldn’t say that I apprehended the Serbian dinar either. I’m a complete failure monument, when it comes to figure out the foreign currency. However, it was enjoyable to look at all those colorful papers with some art on them. 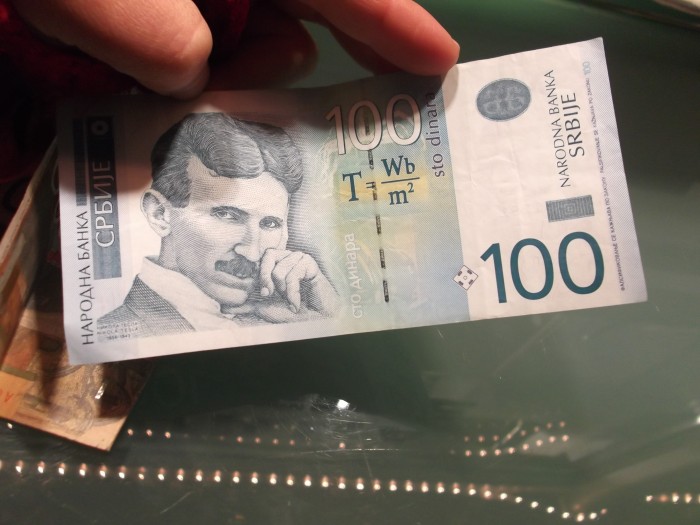 As soon as we had our city maps, we started conquering the city. Even though it was a bit early, we couldn’t help but starting our tour with mulled wine at Trg Republike (Republic Square of Belgrade) where the cute, tiny shops were standing for the New Year. 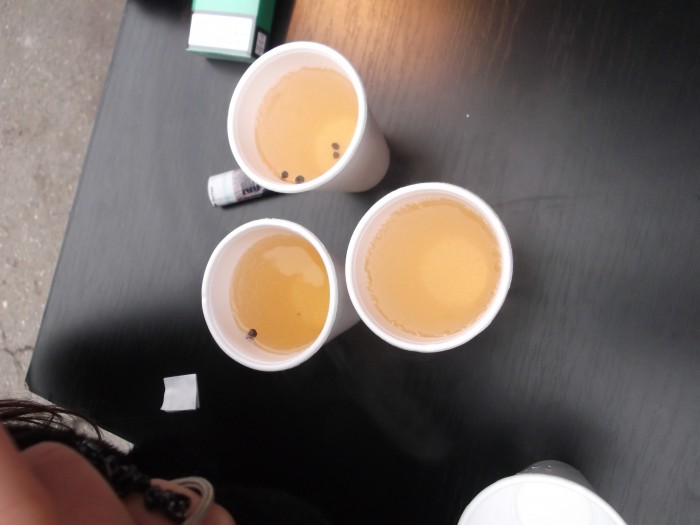 Drinking mulled wine at Trg Republike. I couldn’t ever be thinking of drinking wine to warm myself up 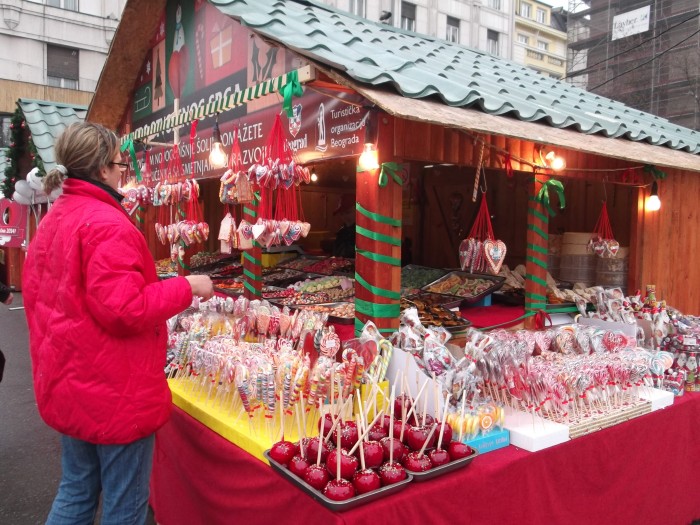 One of the cute shops at Trg Republike

I highly assume that every city or capital has their own İstiklal Street of İstanbul. In Belgrade, Knez Mihailova street and Skadarlija are two of them. At the end of Knez Mihailova street you will meet Belgrade Fortress ”Kalemegdan”. Deriving from Turkish name ”Kale” meaning ” castle” and ”Megdan” ( Meydan in Turkish) meaning ”Square”, it has the best view of rivers Sava and Dunav (Danube). There are a couple of more names which derived from Turkish, such as Dorćol (combination of ”Dört” (four) and ”Yol” (Road) ) like a junction and Tašmajdan (Taş meaning Stone and Majdan meaning Meydan – Square) were some of the examples which surprised me when I heard it. We were given those informations by a Serbian man, whom we met while we were drinking our cups of mulled wines at Trg Republike. He was so kind to circle all the places on the map for us to see, and share some of his thoughts about Serbia and Turkey. 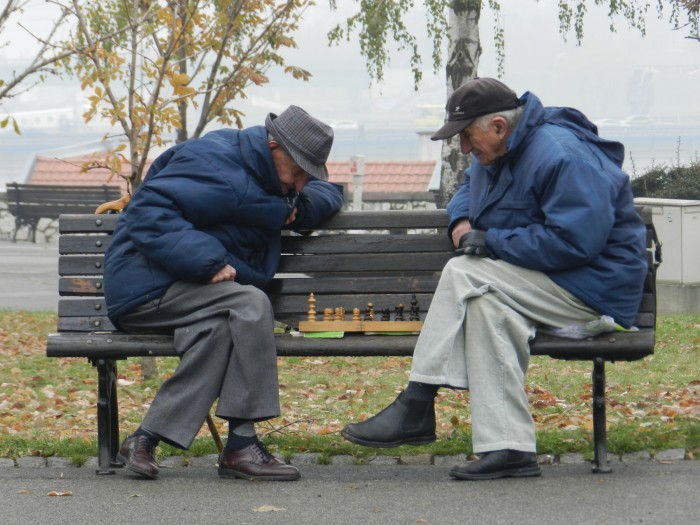 Favourite photo of mine, best friendship ever: Chess Friendship. At Kalemegdan 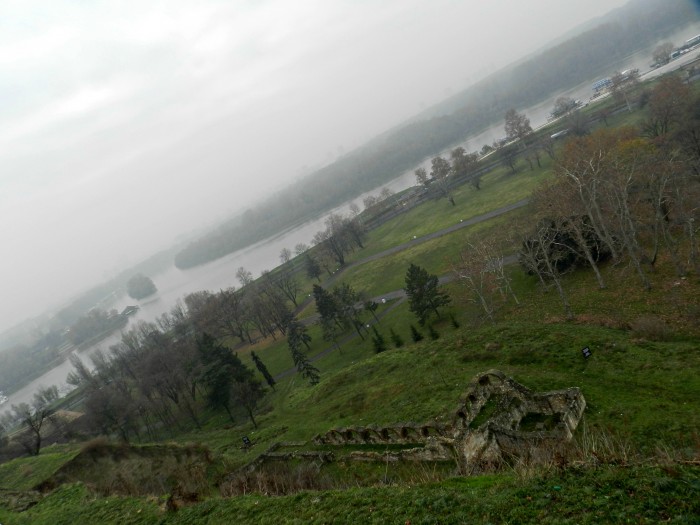 View of Sava and Dunav rivers from Kalemegdan

To name just a few: Bajrakli Dzamija (Bairakli Mosque), Dorćol, Skadarlija, Tašmajdan Park, Karađorđev Park, we walked all around the city and saw beautiful architecture of Belgrade. It was really cold, but when you walk long distances you don’t mind the cold anyway. I simply adored the doors of Belgrade. I took so many photos I could hold an exhibition, only to display the doors of Belgrade. 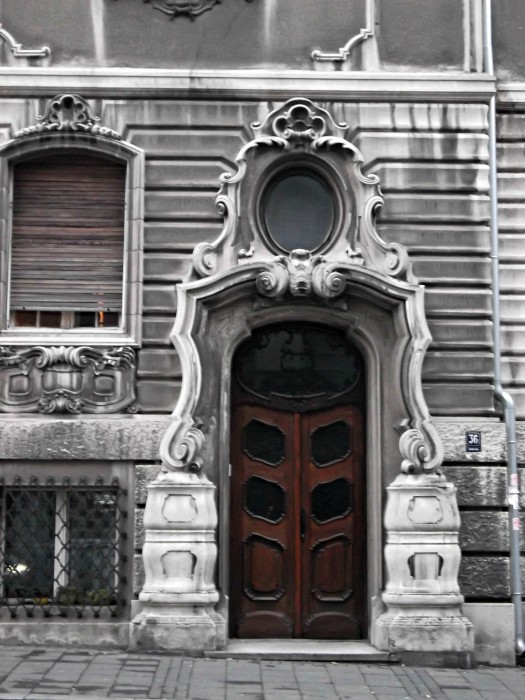 Beautiful Baroque Style Door at a street on the way to St. Sava Temple 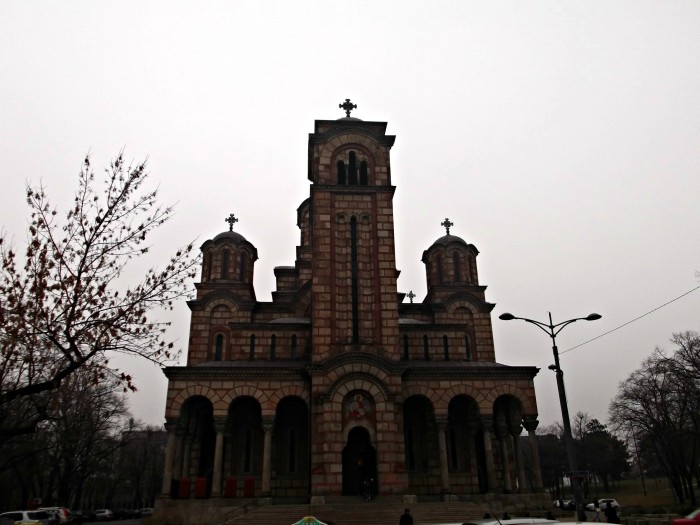 Even though a few museums were under construction and temporarily closed, I still thought highly of Belgrade and smelling the winter air of the city was even better. It is absolutely sure, that I will visit it again in summer, when I will visit all the museums and galleries.

Getting the bus back to Kosovo, we had to figure out how to get to Prishtina Airport as there wasn’t apparently any transportation, except the cabs who were there in purpose of taking advantage of the panicky travelers, who were trying to reach the airport on a budget. Luckily for us, after asking a few locals waiting at the station, they told us that there will be a bus coming for another city of Kosovo, that we can get on, but had to get off at the airport junction, which was totally fine. Instead of paying 35 euros, just paying 2 euros, we got the bus. but had to take a taxi at at the airport junction anyways. Hopefully not all the people are with the intention to take advantage of you, we were so lucky that a driver accepted us only for a few changes of euro. 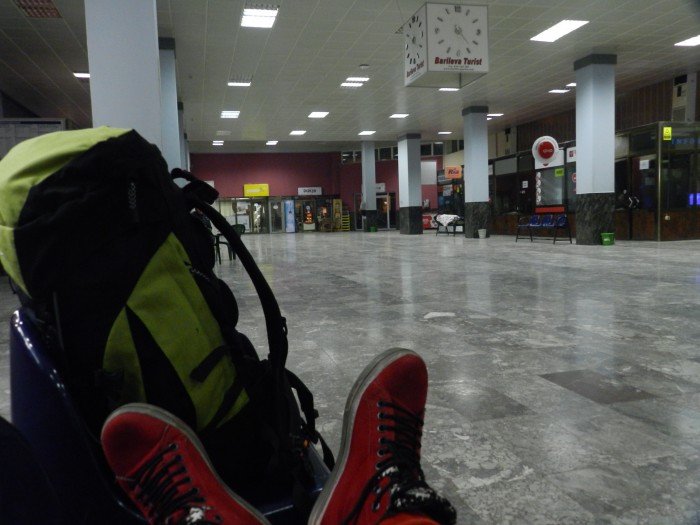 Waiting at the bus station of Prishtina in cold and exhaustion, but satisfied with a great trip I had