It was going to be my first TC (training course) experience, when most of my friends already had similar experiences about summer camps, cultural exchanges, training courses or EVS ( European Volunteering Service) all in another countries,  for long term or short term. When I was recommended to participate the TC that held in Kosovo, the first thing I thought was “Please let it be without any visa application”‘ as it is a complete headache and a mood killer, when you get so much excited about going to another country for the first time. After all, it happened as I wished and there was no need for visa application, which actually made my day.

After my work finished, I was already in search of doing some new stuff for the upcoming winter season. When I was asked by a friend of mine (who’s really into these kind of projects and volunteering stuff), whether I was available and would consider going to Kosovo for a week, I straightly jumped into it, without thinking even a second. I had some time before leaving Fethiye, so I had the chance to look about Kosovo in advance, what to see during the time I was going to be there.

On 8th December 2013, I was on the plane with 4 other participants from Turkey with whom I met  in the plane before arriving to Kosovo. After starting conversation, in order to get to know each other a bit more, the plane landed on Prishtina International Airport. Being so excited and curious about what is waiting for me in the coming week, we were welcomed by the hosting team. 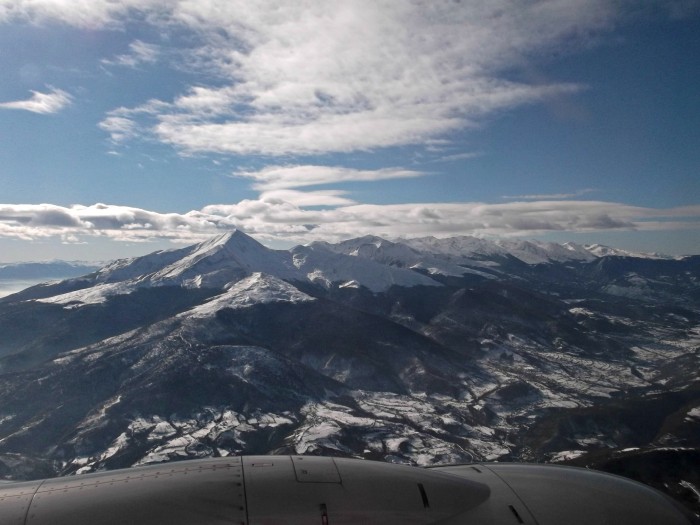 Just before landing, I had a chance to take a shot. Up in the air, Kosovo

When we arrived to our hotel, where the training course was held (Hotel Apollonia which you can get by the minibus number 3 from the center), we learned that the first day was off, therefor as soon as we met some of  other participants, we decided to walk to the city center to discover around a bit. When we arrived to the NEWBORN statue, I couldn’t believe that I was actually there, as just a few days ago I was looking at its pictures on the Internet and then/now I was standing there, taking photos in front of it. The first coffee I had after this first walk, was the most delicious coffee I had in Kosovo, where I was just getting to know people. That first conversation and the very same questions that everyone asks each other, are the most exciting moments before truly getting to know a person. 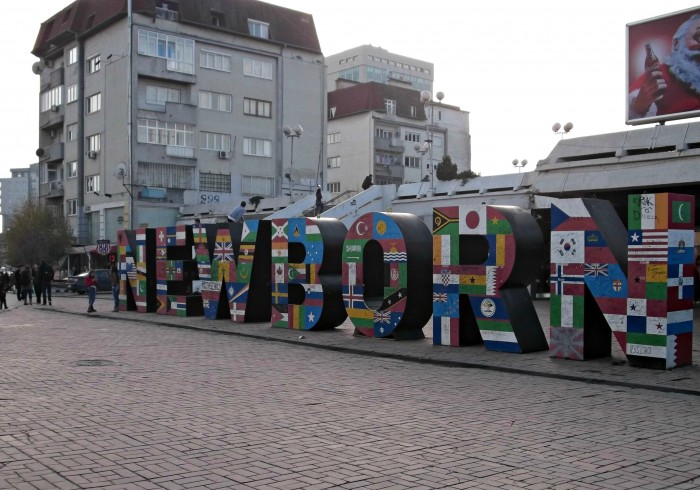 The Newborn Monument with the flags of the countries on it which have recognized Kosovo after its declaring independence.

In my country, during a weather forecast presentation, there is a general expression that everyone knows: Cold Wave from the Balkans. The next morning when I woke up, I literally sensed that cold wave. It was astonishing to witness something that I have been hearing for years, I was in the Balkans Cold Wave! In my humble opinion, on the eve of new adventures and discovering, cold weather would come the last in the list for the things to worry about while traveling.

The first day of the course, we played a few funny games in order to know each other a bit better. We even went to the city for the game called “Treasure Hunting”.  In the list that we were given, there was everything to see that I had written, before I packed up for Kosovo trip. I couldn’t be happier. While we were trying to find the places in the list, that we had to find before any other group (we were divided into a few groups), we were taking photos of the local people with us, explaining that we were discovering the city within a game. We were asking for some funny jokes as well, to write down and beat the game as well as some other rules. I still remember one of them : ”What does a donkey do under the sun?” The answer is ”Shade” 😀 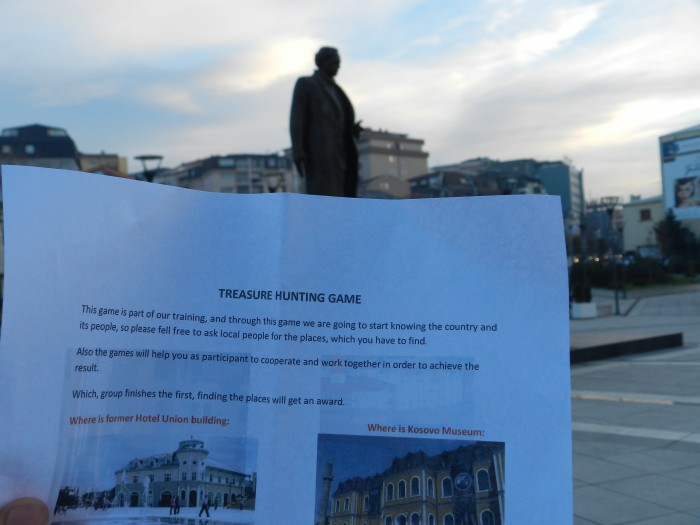 When we were rushing here and there, to be able to finish the game on time, we found a gray kitty that was cold and scared and constantly meowing. I still remember how we all made a great effort, stopping people on the street and asking if they could get a kitty to their house. We wouldn’t let that tiny cutie being alone in the streets and we kept asking. Some of the people already had dogs and some of them simply turned us down. Later on, we even went to a police station, where I guess we were mocked, asking if they could pet the kitty or could offer us any veterinary. I couldn’t quite know what they answered as I wasn’t the one who spoke with. Later we decided to leave the kitty at a gateway, inside of a fancy apartment, with the hope of the kitty’s having a warm place to sleep and being fed. Well, sometimes I do think that I want to become rich only to provide animals better living conditions (and buy more books). 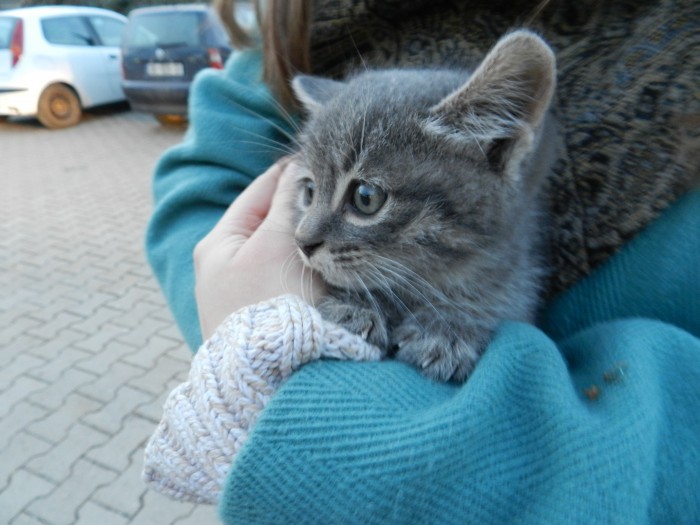 I wish/hope this kitty has a good life and is happy wherever it is.

At the end of the course, having an off afternoon till the evening and hoping to have some time on my own, I used the chance, getting on a taxi to catch the bus to Prizren, a historic city, lying on southwest of the country. On the way, I met a lady sitting in front of me, who heard me speaking Turkish with the person next to me. She turned and asked me why I was speaking English, but not Turkish (when I asked the driver some things), obviously people knew more Turkish than English (Turkish drama/series and movies were being quite well-known in the country) which surprised me. She was so kind to tell me about her life and what things to see when I get to Prizren. Even though it became dark when I got there, yet I could see most of the city, as it was quite small. However, I still couldn’t forget the cold embedded in me, when I was taking photos in Shadervan Square. Catching the bus back to Prishtina, I could catch the farewell party at the hotel at 21:00. I was again in a kind of satisfaction, the feeling that you have after a solo-trip. 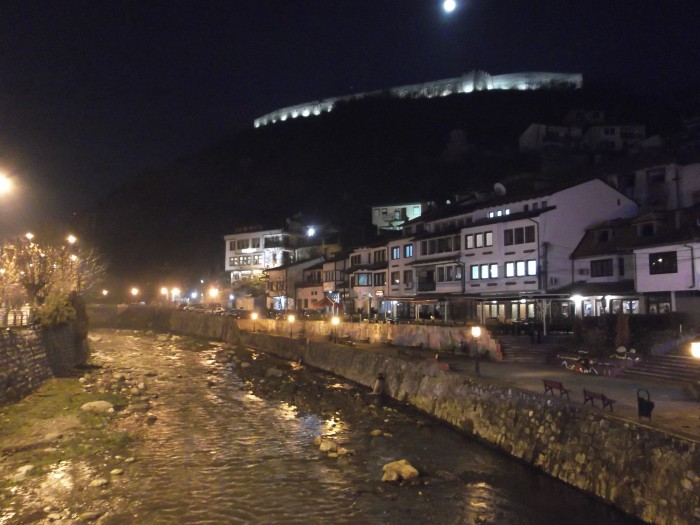 City of Prizren by evening.

During the time of the training course, (the content of it was Youth for better society – by the support of Youth in Action Programme – including learning from each other, sharing best practices, discussion and creating new ideas for future cooperation together) thanks to the games and stuff, I learned many new things, gained new perceptions and enjoyed a lot. Beside all that, I met a lot of people from other countries (Albania, Kosovo, Italy, Slovenia, Poland, Macedonia, Hungary and Turkey) whom I can’t wait to meet again in the future.  Hopefully, I had new ideas about countries and people from other countries. Moreover I could clearly understand the power of sharing thoughts, so that it can open some new horizons. I can not forget the hosting team’s effort to make us feel comfortable and showing us what Kosovo looked like in a week of time. 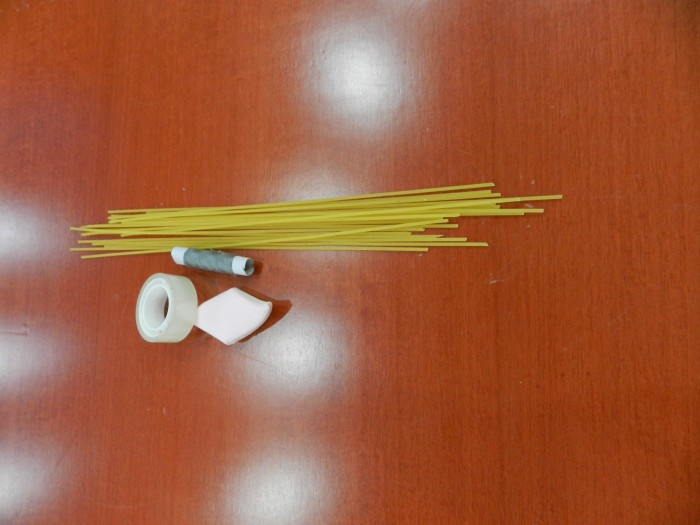 Making the longest macaroni stick only by using rope, tape and one piece of marshmallow, was the hardest game. However it was for teaching us the importance of team-work, cooperation and decision making and performing in a short time.

The National Library of Kosovo 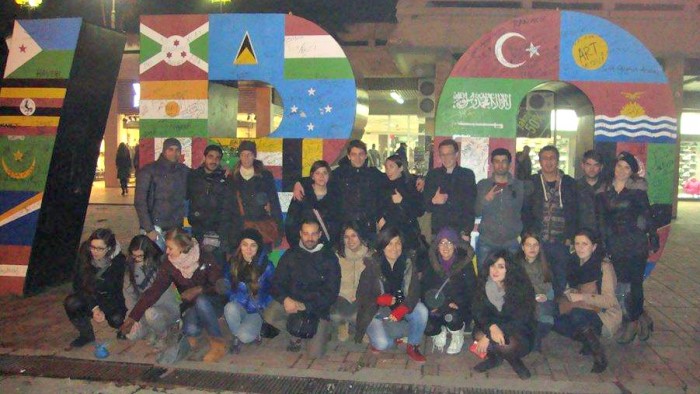 Lovely group of the Kosovo Training Course, at Newborn Monument

Youth for a Better Society: Newborn Kosovo
Rate this post