This square is Ljubljana’s major and most central spot. It is the meeting point of five streets, including the Triple Bridge. The circular design with the granite blocks was suggested by architect Edo Ravnikar. He also envisioned a fountain to be put right in the centre of the square but the idea was not embraced by the citizens and so the square has never seen a fountain. The square is named after Slovenian poet France Prešeren, whose bronze statue stands on the side. The statue shows the famous poet with the muse of poetry sitting above him. On the sides are reliefs depicting the story as told by Prešeren in one of his most appreciated sonnets. 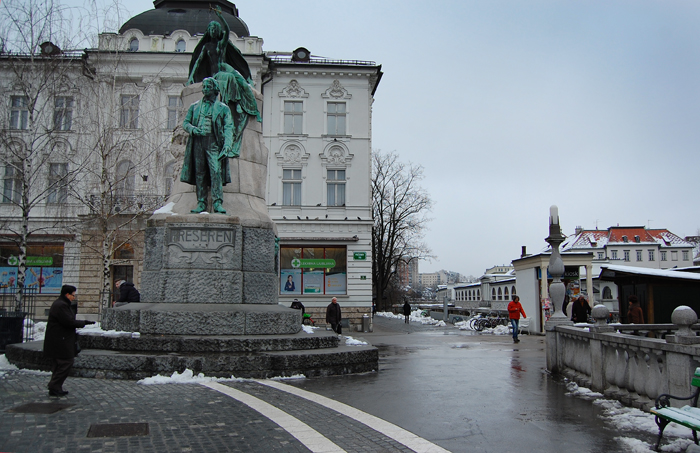 What to see in Ljubljana: The statue of France Prešeren 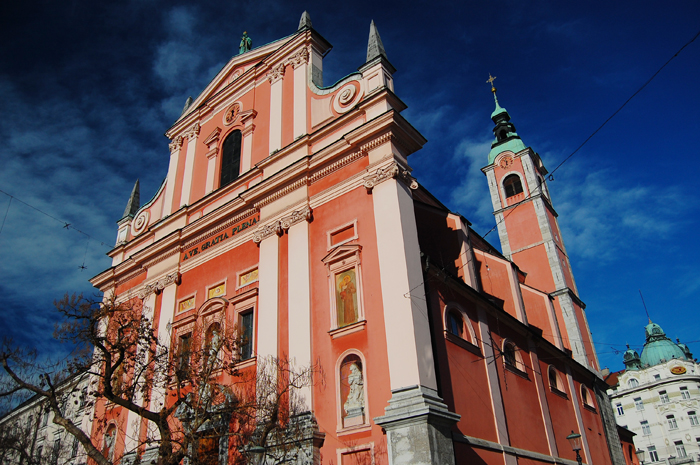 What to see in Ljubljana: The Franciscan Church of the Annunciation, which overlooks Prešeren Square

Truly the city’s greatest asset, the Ljubljana Castle deserves a look from anyone visiting the city. The castle and its rich history play an instrumental part in the shaping of Ljubljana’s landscape. There are several exhibitions in the castle itself, as well as a viewing tower from which the entirety of the city can be admired.

Like a lot of buildings in Ljubljana, the seat of the City Municipality of Ljubljana was originally build in the Gothic style but was later renovated so its image would include elements typical for the Baroque style. Inside there is a courtyard with Francisco Robba’s Narcissus fountain, as well as a statue of Ljubljana’s former mayor Ivan Hribar. The town hall also houses regular art exhibitions. Currently showing is a collection of paintings depicting Ljubljana. It’s a group exhibition, which makes for a wide array of painting styles and perspectives on Ljubljana. 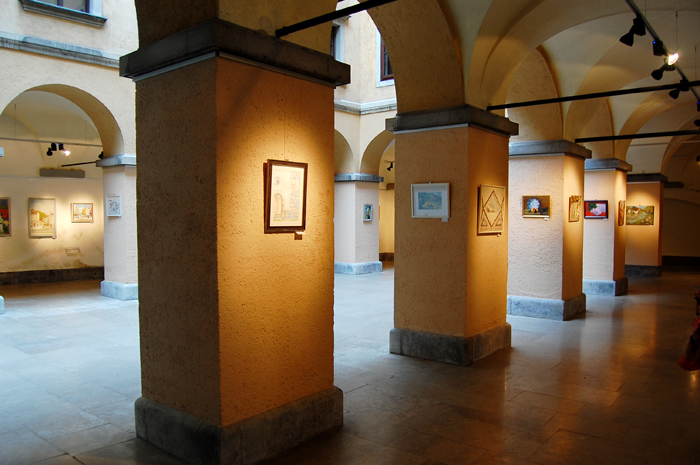 What to see in Ljubljana: The Town Hall and the art exhibition in it

Upon seeing Bernini’s Fountain of the Four Rivers in Rome, Italian sculptor Francesco Robba was inspired to make a similar fountain with his own spin on it. Robba’s Fountain of the Three Carniolan Rivers, made in the Baroque period, is today known simply as Robba’s Fountain and remains one of Ljubljana’s central points of visit. Much like Bernini’s fountain, which depicts four figures, each representing one river and continent, Robba’s Fountain, too, depicts figures that are said to represent three Slovenian rivers: Ljubljanica, Sava and Krka. The City Square, where the fountain is placed, is a meeting point of three streets, toward which each of the three figures is turned. Due to weather conditions and their damaging effect on the fountain, the work has been moved to the National Gallery, with a replica placed in the original spot on City Square. Robba’s Fountain doesn’t look quite as majestic indoors at the gallery but the replica at the square does a fine job in creating a sight worth seeing. 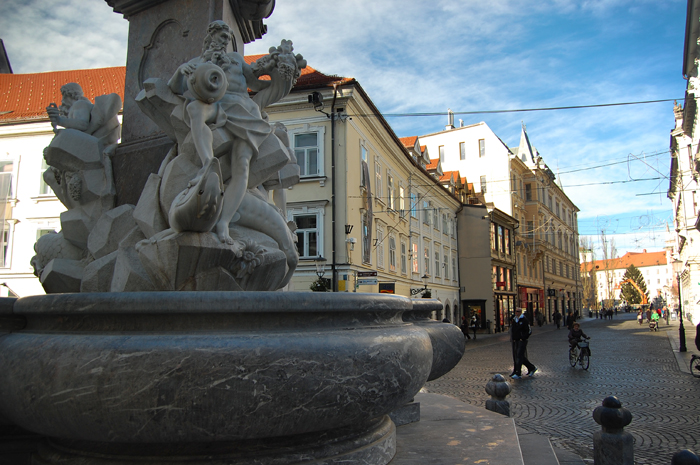 What to see in Ljubljana: Robba’s Fountain

The National Gallery building is currently undergoing a renovation, which is why the main entrance is closed and so the building is more easily missed. Don’t be discouraged though. After all, it’s what is inside that matters, isn’t it? The gallery’s permanent collection is split into two parts, Art in Slovenia and European Art. The former collection is why, if you are an art lover, a visit to the Slovenian National Gallery will be worth your time. The Art in Slovenia collection spreads from The Middle Ages to the early 20th century but what I find to be the best works in the gallery are the Gothic sculptures and the painting of Slovenian Realists and early Modernists. The gallery also hosts travelling exhibitions, which currently includes Painting In Normandy. Information on what’s coming to the gallery next is best found on their website. Seeing as I could literally fill a book with my impressions of the gallery, I’ll stop here before I get too into it. I’ll wait while you go and add this gallery to your list of places to visit.

Done it? Good. If you’re interest lies in modern art, Ljubljana’s Museum of Modern Art is just across the street from the National Gallery. 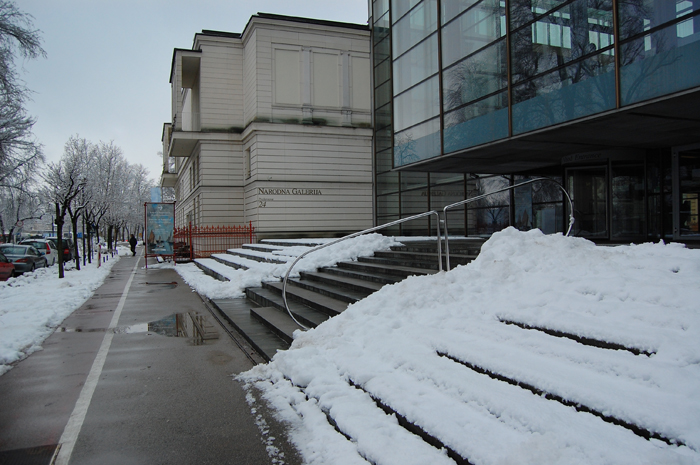 What to see in Ljubljana: The Slovenian National Gallery

Ljubljana has a lot of greenery and little parks spread all over the city. Tivoli Park is the city’s largest and most visited park. It is connected to the hill Rožnik, which is perfect for a midday stroll. The park is also home to a greenhouse, a lake and a large children’s playground. It is close to an indoor pool and Tivoli Hall, where hockey and basketball matches take place regularly.

Ljubljana has a few skyscrapers but there is only one that is actually named Skyscraper. It is said to be one of Ljubljana’s most recognizable landmarks, although I am completely baffled as to why that is. At the time this building was being built the skyscraper might have towered over the surrounding area but today, it is hardly any taller than the buildings next to it. The reason why I’ve included it on this list is that it provides with a great view of Ljubljana, quite different from that seen from the castle. The main difference is you can actually see the castle this time. Even though I spent all of 5 minutes on the top of the skyscraper (I came up just for the view), the visit was well worth it. 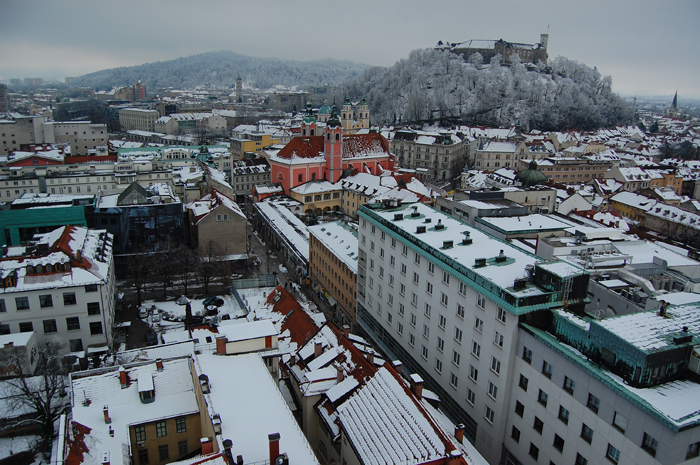 What to see in Ljubljana: The amazing view from The Skyscraper

One thought on “7 Things To See In Ljubljana”