Popular with both tourists and locals, Ljubljana Castle is a must-see for anyone traveling through this city.

Now, there are several ways of reaching the Ljubljana Castle. The one I chose today and the one I would recommend is walking. Even if you were a slow walker taking the longest route possible, it would still take you no longer than 20 minutes to reach the castle. There are numerous paths to the top from each side of the hill. The walk to the top is so enjoyable it seems a waste to drive up to the castle. Then again, if you are attending a wedding or a formal event, driving may seem the more sensible option. In recent years, however, parking on the top of the hill has been banned so unless you deem the fine an acceptable option, you might consider the tourist train. This train, which is actually not a train at all, is most appropriate if you have trouble walking or you just don’t feel up to it. Then there is the fourth option, which has become highly advertised in recent years: the funicular. By far the fastest way to get to the Ljubljana Castle, the funicular takes only a minute to reach the top of the hill. Although its speed is commendable, I do wonder if the funicular provides a good enough excuse for the massive disruption it caused to the landscape of the hill. 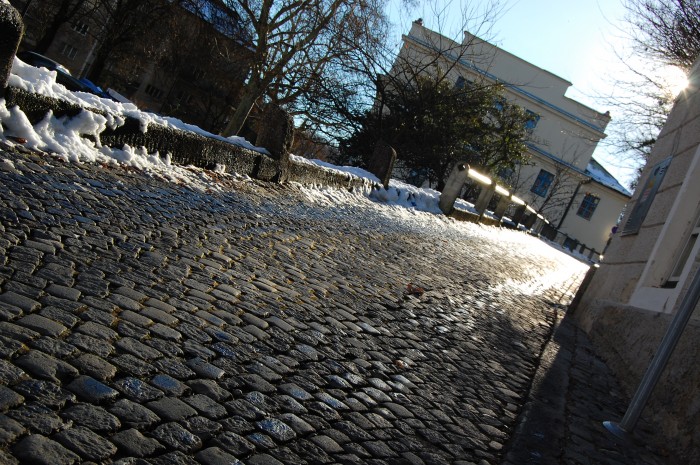 There are many routes that lead to the top of the Ljubljana Castle.

Having decided to walk up to the castle, I foolishly choose the iciest route possible so reaching the top with all limbs intact does prove to be a bit of a challenge. The fresh air, the melting snow and the warm winter sun, however, keep my spirits high and my camera shutter finger twitching. Soon, there I am (just 10 minutes after picking myself up off the floor for the second time), walking through the entrance of the Ljubljana Castle. 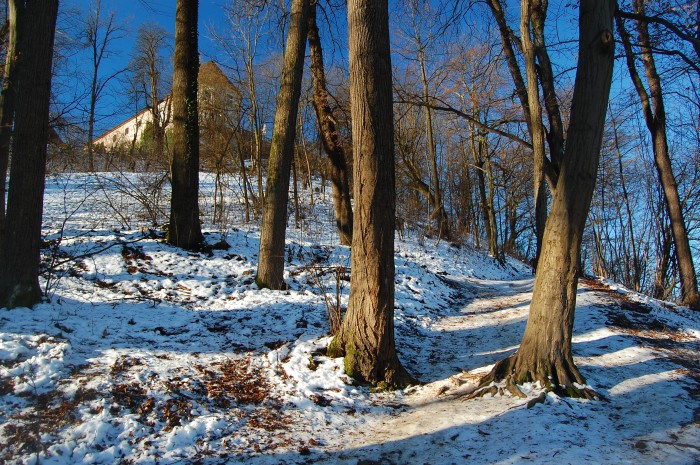 The path I chose was particularly icy.

At this point I should say that even though I plan on going to the top of The Viewing Tower to get the full 360° view of Ljubljana, the view from in front of the entrance is quite a sight to be seen – especially in the light of the winter sun. 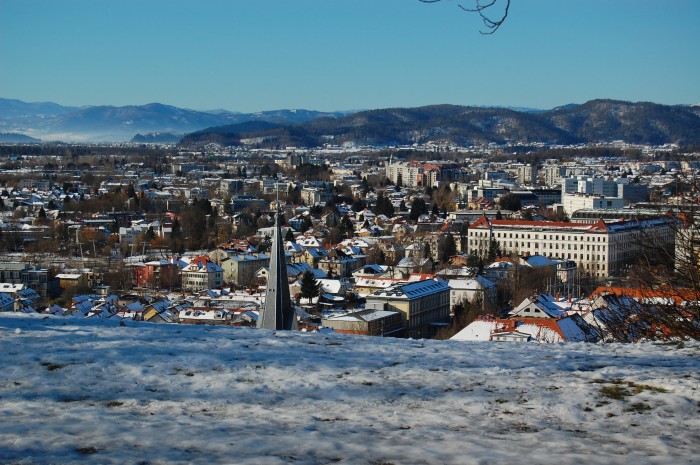 Upon purchasing the tickets (you can see some of the Ljubljana Castle free of charge but to see the exhibits, the Virtual Castle and The Viewing Tower, the tickets will cost you 6€) I make my way across the courtyard, a vast irregularly shaped space, limited from all sides by the castle walls. In the warmer months, the Ljubljana castle courtyard serves a different crowd each night, being a real hub of activity – with cafes, film screenings, stand-up comedy nights and other events taking place there. Many visitors are impressed by the courtyard but I think it makes an even better sight once you know its previous purpose. During the years when the prison was still being used, the courtyard served as the area where prisoners could stretch their feet daily, walking from one side of the courtyard to the other before returning to their cells. 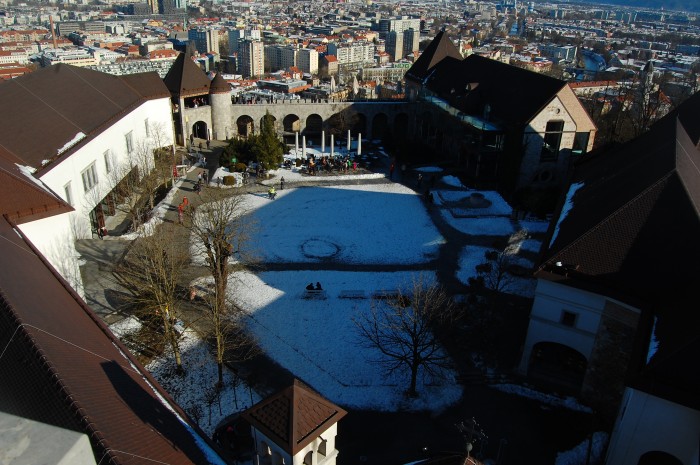 Ljubljana Castle’s courtyard as seen from The Viewing Tower

The first exhibition I decide to see is The Penitentiary. These solitary jail cells were first built in 1895 but were renewed and made available for public viewing in 2011. The forth cell includes a holographic projection of its former inhabitants – the prisoners. The projection is accompanied with sound effects and is viewed through the bars of the jail cell. Now, I read about this exhibit before going to the castle and I have to say, the cells themselves are interesting but the holographic projection sounds better on paper (or rather, on my computer screen), than it looks in real life. 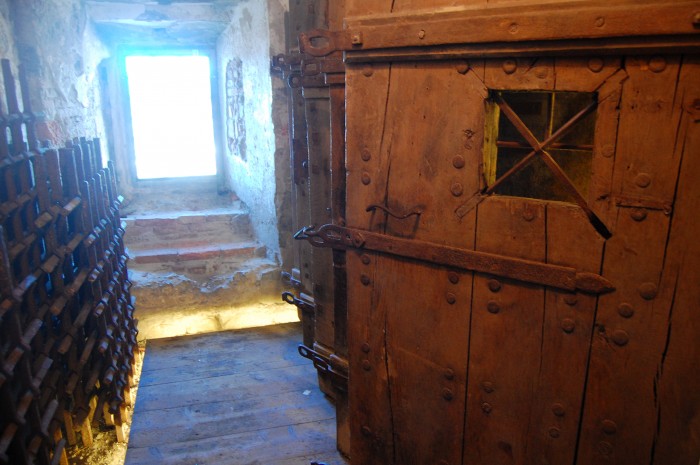 Unfazed by this slight disappointment, I go up the stairs to the Virtual Castle. This animated narrated film lasts what feels like 10 minutes (although my sense of time is questionable) and gives a more detailed history of the Ljubljana Castle, its renovations and its inhabitants. I really liked this projection and would recommend it to anyone who, like me, is too lazy to read all the texts in the exhibits but is still interested to learn more about the Ljubljana Castle. 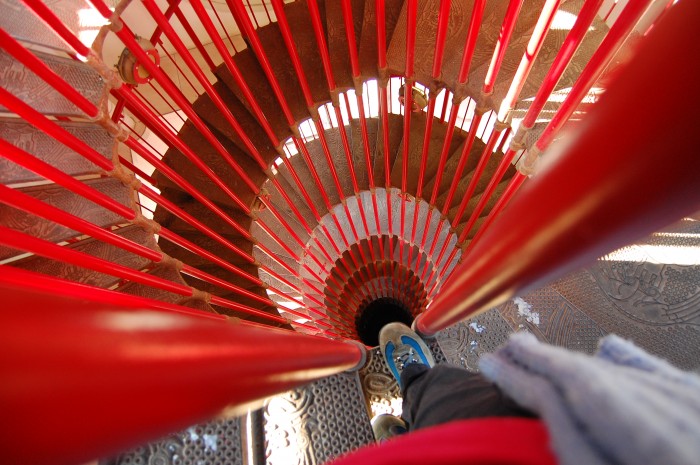 Going up to The Viewing Tower

Next, I ascend the red stairs up to The Viewing Tower. After a few minutes of heavy breathing, I reach the top of the tower feeling like I’ve obtained my exercise quota for the day. I learned from my Ljubljana Castle booklet that back in mid 19th Century this tower provided the living quarters to the fire guard, who looked over the city, firing a cannon each time he noticed a fire breaking out. Nowadays, of course, the tower no longer serves its original fire-combating purpose, although wouldn’t that be an interesting job? The Viewing Tower, much like the rest of Ljubljana castle, is today solely a tourist attraction. I can see why this tower is so popular: the view of Ljubljana truly is amazing. However, I spend a little less time admiring the view as I would’ve liked to, due to the heavy wind that is not at all present on the lower levels. 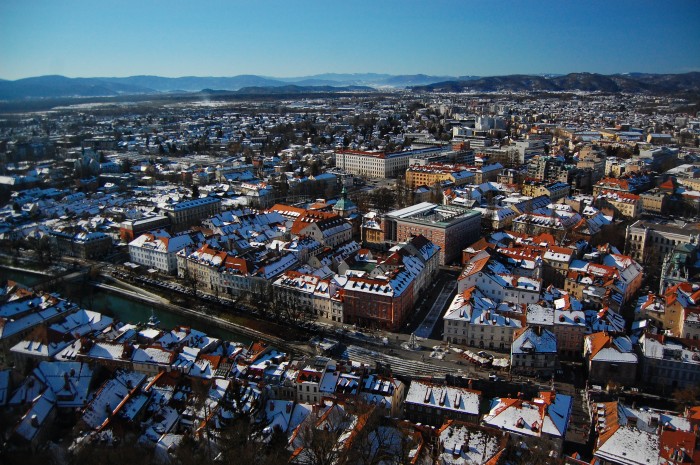 Ljubljana Castle watches over the city

My last stop is the other permanent exhibition the castle holds, Slovenian History. The exhibition covers a timeline from the 1st century AD, all the way to Slovenia joining the European Union in 2005. I’m not super interested in this exhibition until I see there are some replicas that you are invited to touch. Which I did. All of them. 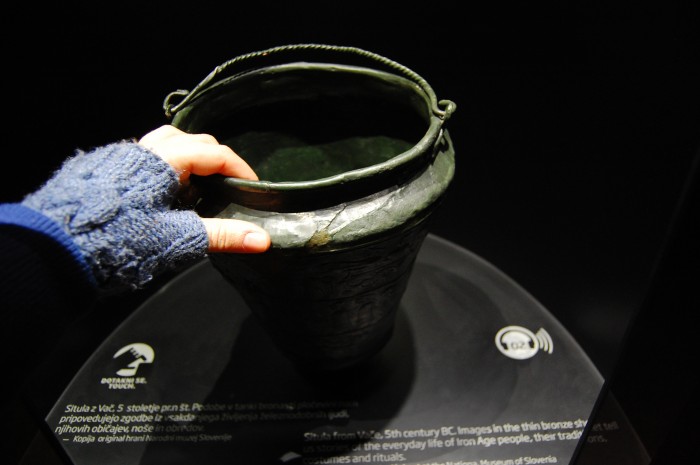 A replica of the Situla, part of Ljubljana Castle’s permanent collection.

6 thoughts on “Ljubljana Castle: The Crown Of The City”

Ljubljana Castle: The Crown Of The City
Rate this post