When you emerge from the Santa Lucia train station in Venice, your journey to La Serenissima has only just begun. The actual city center, Piazza San Marco, is all the way across the city. And for a city that on a map might seem tiny and “cramped” there’s quite a walk across it. There are no straight streets and walks, it’s a winding road to get there, over tiny bridges, under buildings, around the canals… 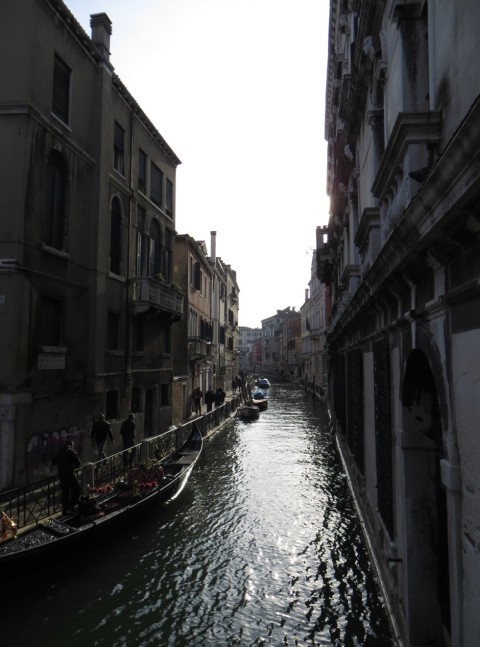 It could be a pleasant and leisurely walk through this old city while one admires the buildings that have withstood time, wars, plagues, and regimes, and wonders at the mastery of the builders of that time long ago and their ingenious thought of building an entire city on water. A lovely stroll through the narrow streets looking through windows of small shops, musing whether to stop any buy that intriguingly made mask or go on in search of a better deal. Or an even more intriguing souvenir.

The walk quickly turns nerve-racking and harrowing if you have a tour booked. In that case there is no lingering, no longing looks into little shop windows, just a breathless pace toward Piazza San Marco. And let me tell you, when you’re in a hurry, the path to your destination seems even longer. Luckily in winter, the number of tourists is much lower than in spring and summer months, which makes navigating the narrow streets (and also access to the sights) much easier.

But, if you’re in a hurry and you have money to spare (nothing in Venice comes cheap), you might want to consider a vaporetto, the venetian water-bus.

You come to suspect you’re in for a special kind of day, when you notice puddles on the streets of Venice even though there was no rain recently. And you know you’re in for a treat (or a swim) when you finally reach Piazza San Marco and there’s water gently lapping against the street underneath the clock tower.

Seeing the acqua alta in Venice is quite a unique experience, especially when you’re navigating the gangways on your way to the Doge’s Palace, brushing past people queuing to enter the San Marco basilica. It’s a rather precarious feat keeping from pushing the people off the gangway while trying not to fall into the water yourself. Precarious and amusing, I could say. 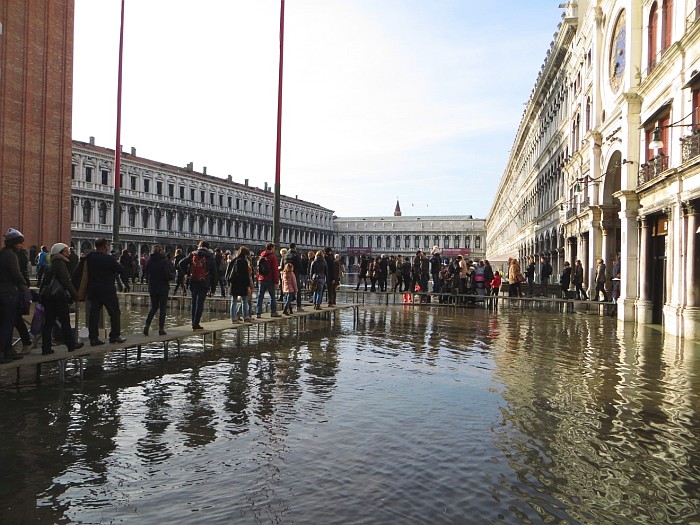 But then you get alongside the palace and you’ve already reached terra firma, so to speak. The lowest part of San Marco square is right in front of the basilica. The paving in front of the Doge’s Palace is still gleaming and wet, but there’s no longer any need for gangways or rubber boots.

When you enter the Doge’s Palace the fun really begins, even more so when your guide is an eloquent anecdote-teller with a pronounced accent that’s both endearing and funny. The tour takes you up the “golden staircase”, that instead of what the name promises, only has a gilded ceiling, through the Chamber of the Council of the Ten, and over il ponte dei sospiri (the Bridge of Sighs) into the dungeons. 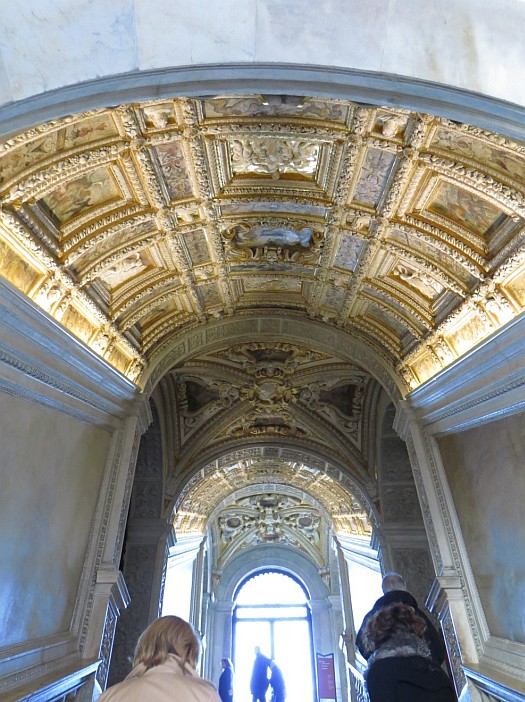 When you return from the dungeons, where the walls still bear signs of prisoners that had lived and died in them, you might be surprised to find out the little bridge connecting the Doge’s Palace to the old venetian prisons is in fact a two-way “street”. You enter through the northern lane and exit through the southern one. And the view is equally telling—upon entering, all one can see is the narrow canal between two buildings, while upon exiting, the view of the venetian lagoon must have brought a sigh of a different nature to the lips of those lucky enough to make it out alive. 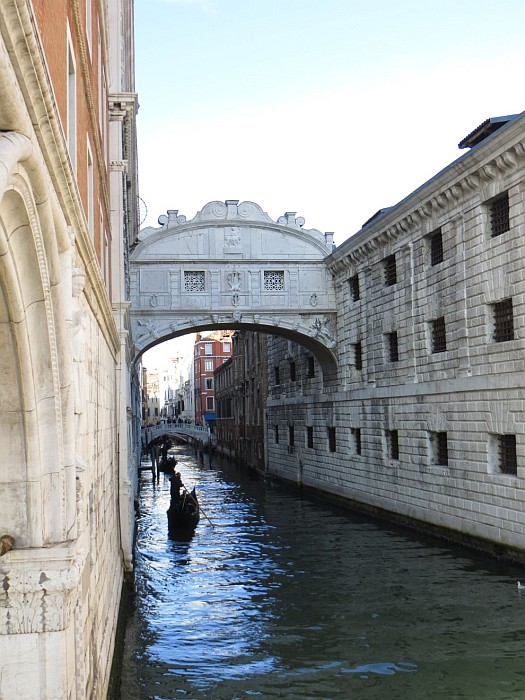 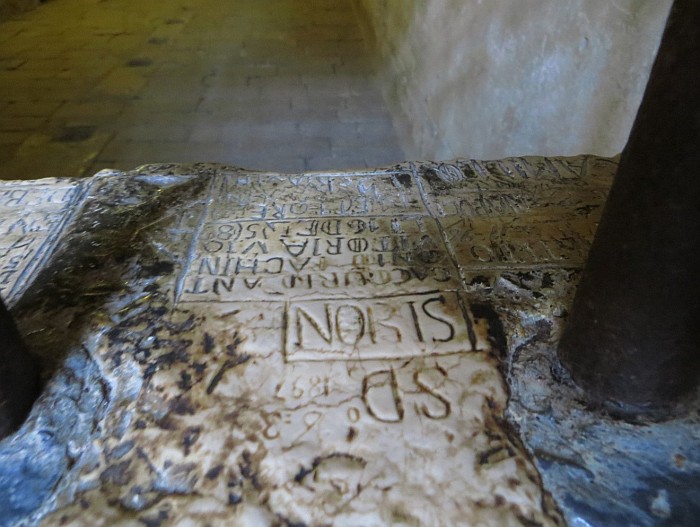 Yet the tour of the palace is far from over, for it takes you up to the second floor to the prisons underneath the roof, where the famed Giacomo Casanova had apparently spent a couple of months before he’d escaped, and then back down to the chambers of the council and the senate. Then comes the cherry on the cake as you enter the Higher Council Hall and realize everything you’ve seen so far has only been some kind of a foreplay. The supposedly largest fresco in the world (I’m inclined to take my guide’s word on it) by Tintoretto takes your breath away, and the view of the ceiling with its many frescoes, each in its own gilded frame is equally jaw-dropping. 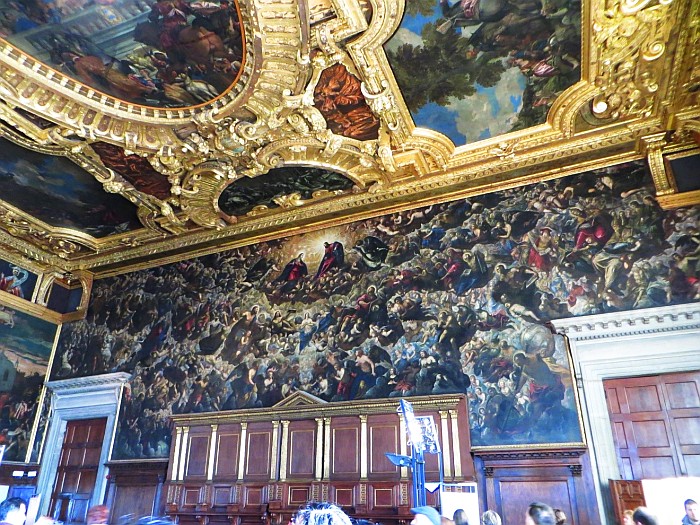 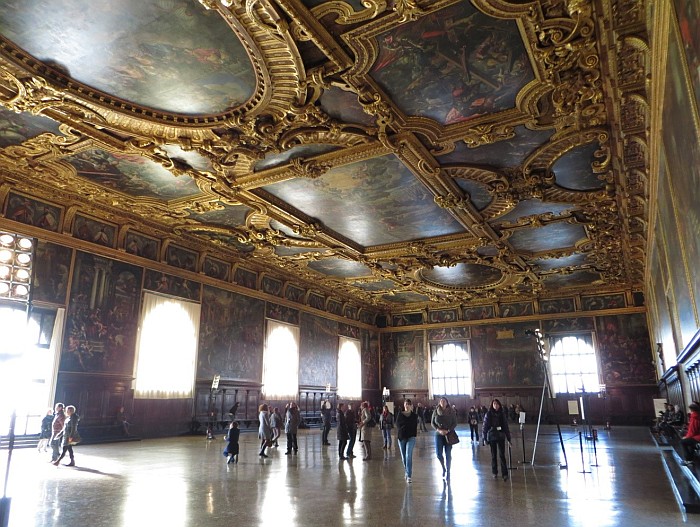 No visit of Venice would be complete without a peek into the San Marco basilica, although I suggest you time it just right to get in between 11 am and noon to get the best out of the experience due to the lighting. Apparently they only turn on the lights for an hour a day so as not to ruin the mosaics.

The best part of the basilica is of course the Pala d’oro, the high altar retable made of gold with gems and enameled medallions. The altarpiece is turned away from the main nave of the basilica and shown only on very special occasions during liturgical celebrations, so there’s a small fee to pay to view it (there is no admittance fee to enter the basilica), but it’s well worth the price. 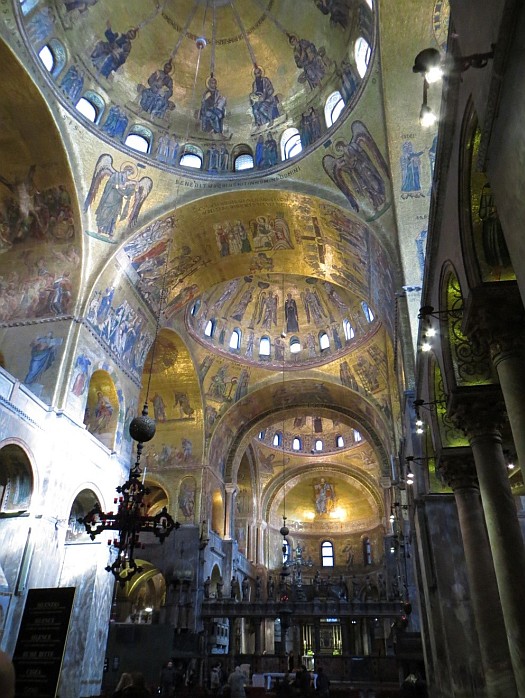 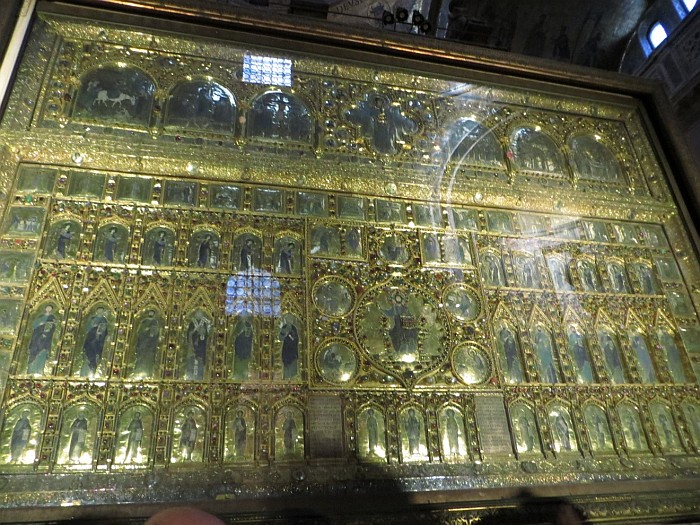 Not so much the museum above the basilica whose main work is the original St. Mark’s Quadriga, the four horses that used to adorn the basilica’s façade, and the actual access to the façade itself which offers great views of the Doge’s Palace, the square, and the clock tower.

The clock tower that’s also one of the must-see sights in Venice. The “tower” was once also used as the home of the clock master, but is now merely a museum offering an insight into the clock mechanism that, at the time of its ideation, must’ve seemed like science fiction, it’s in fact an astronomical clock, and of course you have to pay a visit to the two moors on the roof, that bang their hammers against the bell at each full hour. 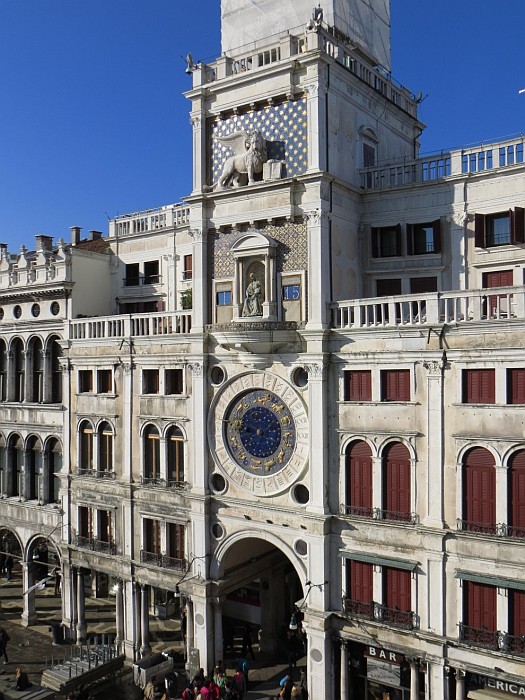 To complete the visit of La Serenissima the climb on top of the campanile, St. Mark’s bell tower, is a must. The short ride up can be a bit of a bother if you happen to share the elevator with three harried Italian mothers with their children that would rather play Angry Birds that see the view. But the possible annoyance is more than worth it when you’re underneath the massive bells taking in the magnificent 360 degree view of the city underneath you. 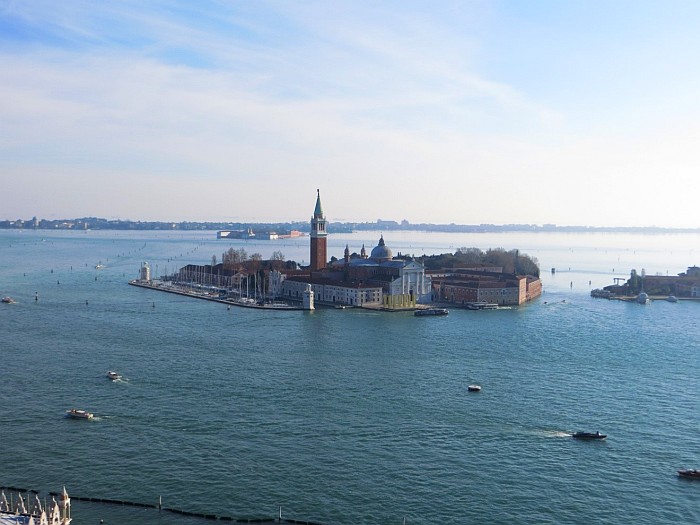 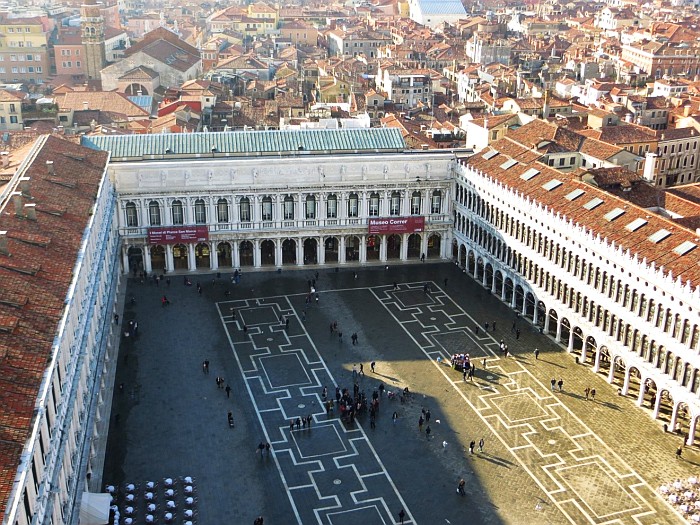 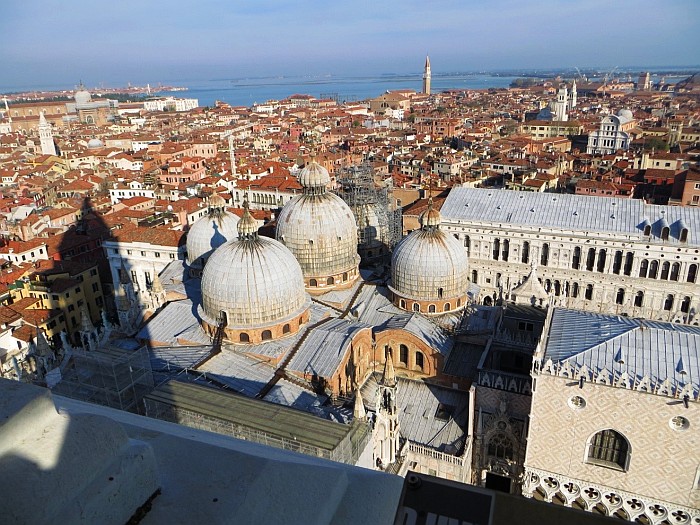 The sky is blindingly blue, the sea emerald green, the roofs of the city glow orange…And you forget the noise around you, forget the ache in your feet and legs, forget the fact you haven’t eaten anything since breakfast, forget everything and everyone, and just be. Marvel at what is in front and all around you, and hope with all your might, it would be there for generations and centuries to come.

A sunny winter day in Venice
Rate this post