Since my childhood I have always traveled south, because what else a person is supposed to do when there is winter with snow and wind and cold all around. Only a crazy person would go further north into even more harsh conditions. However, I guess this »only-South-childhood-travels« provoked in me a sort of longing and desire about north, which triggered my imagination.

And so I was sitting in front of my computer on one cold February morning in Slovenia and received an email from my friend, in which he proposed to visit Iceland to see and photograph the northern lights. At first I thought: “What a crazy idea, it is winter!”, but a few weeks later I found myself flying to Reykjavik.

Aurora Borealis in a nutshell

Iceland lies on the latitude of 65 degrees north, which makes it a perfect country to see the northern lights, also called Aurora Borealis. Aurora Borealis, which literally means the Dawn of the North (the name is derived from Aurora, the Roman goddess of Dawn and Boreas, the Greek god of the North Wind), is a spectacular cosmic show, caused by the solar wind interacting with the Earth’s atmosphere. It occurs high in the atmosphere, where the air has become very thin and the electrically charged particles from the solar winds make this thin air shine.

Honestly, the phenomenon has been given too much publicity in my opinion since the colours on the photos are much more intense than those you can see with your eye, but nevertheless it did not let me disappointed. I have seen white to greenish spots over the skies and the horizon and when it got more intense, the lights were »dancing« on the sky like waves that touch the coast or like a burning flame. It was really marvelous to stand there in the middle of nothing in the darkness and watch the show of the nature (OK, I admit, I am easily overwhelmed by the phenomena of nature, but still, it WAS nice). 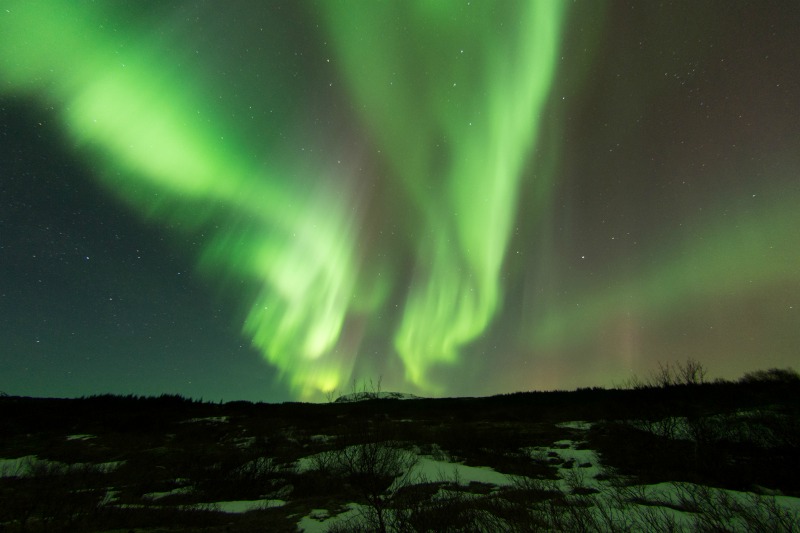 For a person that is freezing already if in summer the temperature drops from 30 degrees to 20, I was literally horrified by the fact that I am going to a place with sub-polar climate. I dragged together the warmest clothes I was able to find in my wardrobe and hoped I will not freeze to death. To my astonishment, I found out that Iceland is not AS cold as I imagined. Actually, the warm North Atlantic Current makes the temperatures in Iceland higher than in most places of similar latitude in the world. It was still cold (and very windy) and I was dressed like I am going to an expedition to Himalayas, but not colder than winters are in my hometown and we had sunny days when temperatures rose to 7 or 8 degrees, which allowed some pleasant sunbathing, too.

Furthermore, I think the decision to travel to Iceland in March was a good one. First of all, Aurora Borealis can be seen only from September till March (after March days get longer and longer and eventually in summer it almost never gets dark). Secondly, since the deep winter is over, it is not as cold and days are already long enough for full day trips. And finally, there was something special and very beautiful in March landscape, which started to wake up from its winter sleep, revealing grass and moos and stones from under the snow cover. 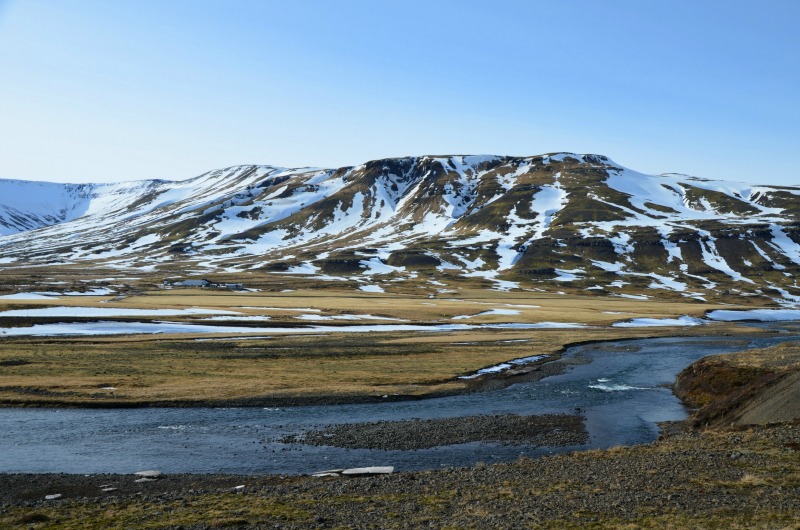 The land that speaks for itself

Every tourist that sets the foot on Iceland goes first of all to a so called Golden Circle tour. This tour, which you can do by yourself or join a guided group, starts at the Pingvellir National Park, which lies in a rift valley near Reykjavik, where the North American and Eurasian tectonic plates drift apart, continues to the Great Geysir and Stokkur Geysir, two periodically sprouting hot springs (the Great Geysir, which could erupt up to 70m high is not active anymore for the past years, however, the Stokkur erupts frequently every 4-8 minutes up to 30m high) and finishes at Gullfoss, which is claimed as the Icelandic most dramatic waterfall. I further extended the tour to see the Keriđ Crater, an old volcanic crater filled with water (which was at the time of my visit still covered in snow and ice), and ended my day in a relaxing geothermal spa in Laugarvatn. Alternatively, you could also drive to the famous Blue Lagoon, which is deemed the country’s most beautiful, but unfortunately also packed with tourists. 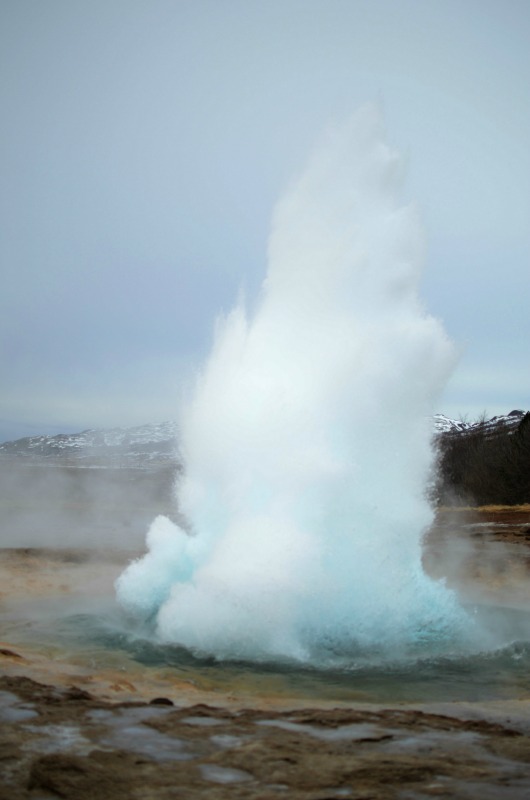 It is all about water and ice

There are many other waterfalls besides Gullfoss to be seen in Iceland, such as Seljalandsfoss and Skógafoss in the south, Hraunfossar and Barnafoss, two “brother” waterfalls with very different characters (the first gentle and soft, flowing from under a moss covered lava bank, and the latter powerful and savage, splashing into a narrow canyon) in the west and Gođafoss in the north, but there are still many more, which I have not managed to visit.

A bit more remote and thus less touristic (at least in this time of the year) attraction is the Jökulsárlón, a broad lagoon on the southeastern coast, where the icebergs of Breiđamerkurjökull glacier are breaking off into the sea. On the day of my visit there was fog laying over the bay so I could not see it in its whole majesty, neither could I see the great Vatnajökull glacier on the horizon, but I could appreciate the mystic of the pale blue icebergs floating in the water and fog, which altogether left an impressive image in my mind. 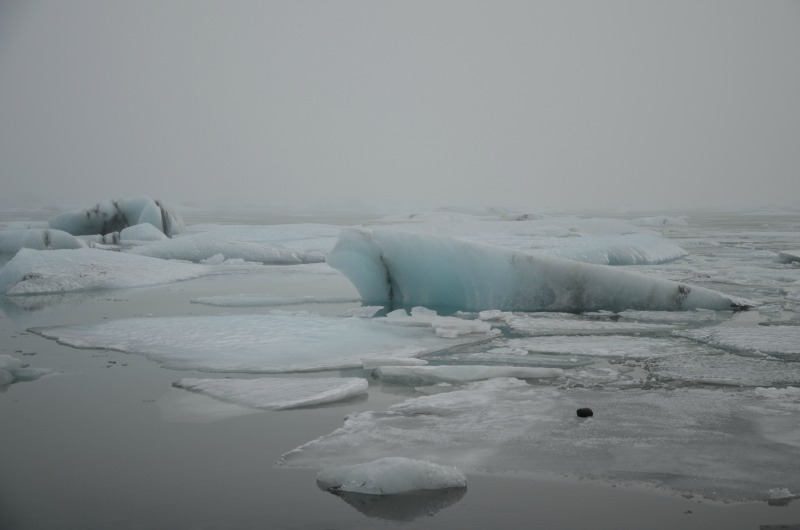 Around the northern shores

Heading further up north the number of tourists reduced and the landscape became even more savage and wild and it all pretty much felt like being on some other planet. Scenic fjords with snow covered mountains and vast fields with strolling Icelandic horses dominate the landscape. Sleeping in a rented cottage on a horse farm instead in an apartment or hotel room also added its magic to the whole experience. Nights were completely dark and quiet, the sky was full of stars, Aurora was dancing in the sky one evening and I was waking up in misty mornings with horses in the meadows at the back of the cottage. 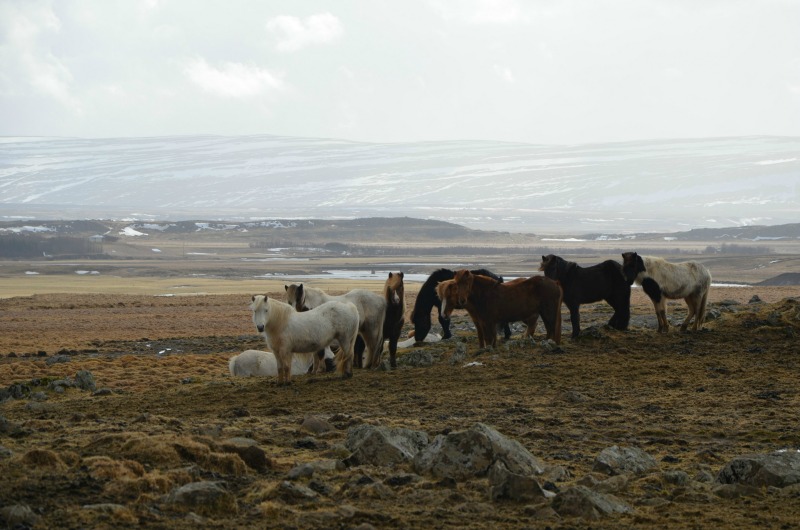 Hot springs are frequent in this part too. There is a thermal bath resort on the shore of the lake Myvatn, called Jarđböđin Nature Baths, from which an impressive view over the whole area is opening in from of you while you soak up in the hot water. We also managed to find a small one just beside the place where we were living, at the end of the cliff, pass the village of Sauđérkrókur. We went there late in the evening, the place was deserted, we were there completely alone, the wind was strong as never, and we were thinking how to undress and jump inside without freezing out and being blown away (and our clothes). We were rewarded with a night swim in calm warm water, while outside the wind was roaring and ocean waves were bumping into the shore. 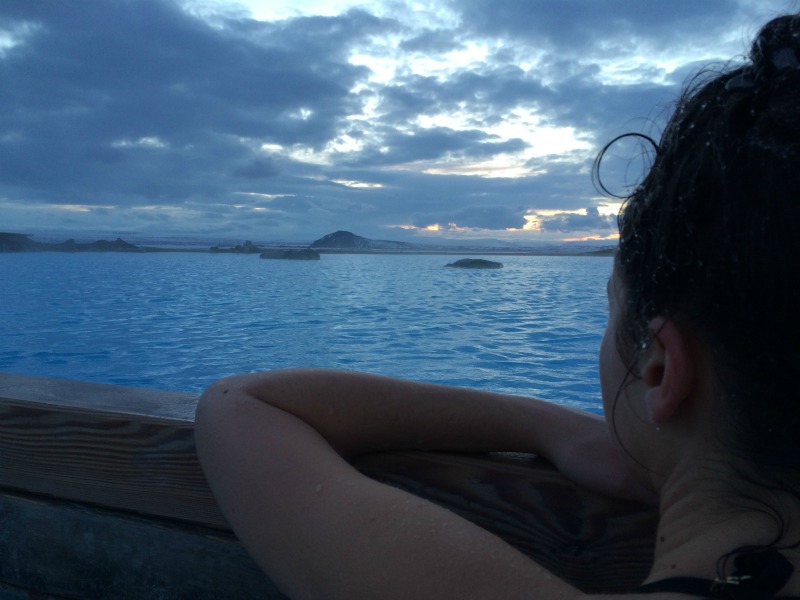 A day in the horse stall

Surely my favourite part of the trip was the afternoon I’ve spent in the stalls of my Icelandic friends. Horse riding seems to be a national sport in Iceland. Nearly everyone owns a horse and is out on it every possible hour of the free time. The stalls look like little cities with roads in between and numbers above each door.

We were first helping my friends cleaning around and preparing food for the horses and then went out for a ride. Riding horses was my dream since years and I took some lessons at home a year ago, but still I am considering myself as very unexperienced rider. The tour we did was not long but was my first free countryside ride. I managed to stay in the saddle and the horse seemed to be happy with my company too.

Icelandic horses are smaller (many confuse them with ponies although they are considered as horses in Iceland) and more hairy counterparts of the horses we know in Europe. I personally think that makes them cutter. Another specialty is the additional fourth gait they can perform besides walk, trop and gallop, which is called tölt. It is actually very smooth to feel for the rider and I liked it very much. 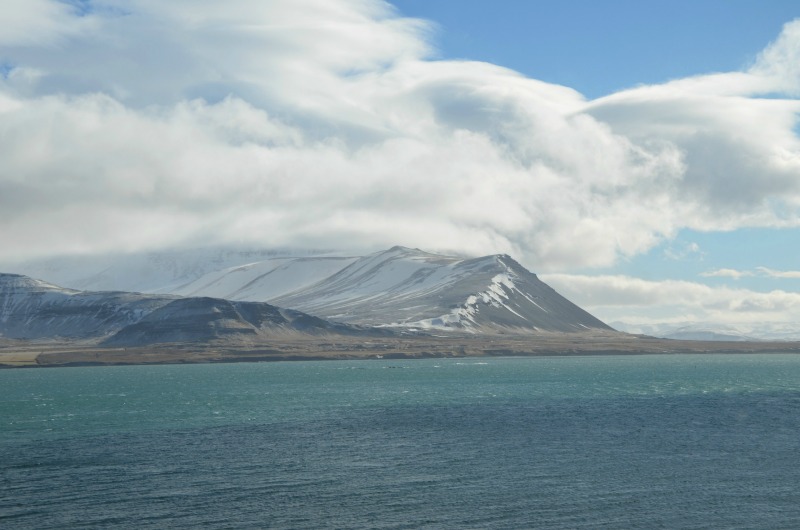 Amazing end of my holidays

After the ride my Icelandic friends said they are going to have a bath in the sea. After a conversation it appeared they are not joking and me and my friend decided to join them in order to see what this story about swimming in ice cold water is all about. Arriving at the spot, we actually indeed saw iron stairs leading to the water (the sort you can usually see in pools or by the seaside in warmer climates) and people in the water. To make the ironic situation complete, we soon found ourselves standing in our bathing suits by the ocean too.

The wind was freezing cold and I was nearly passing out of cold but I confidently walked in the water that had 3 degrees (the sooner I get in, the sooner I get done with it, I was thinking by myself). I must admit it was not that horrible. I guess if you’re cold to the point when you nearly can’t feel your skin anymore you don’t mind soaking in cold water either. Besides that we were told that the essential part of succeeding to enter was to put on the neoprene gloves and shoes (although my friend would disagree – he claims the whole thing is just a mind game). The real strike/hit you experience is when you go completely in. I had the feeling my heart will stop and I couldn’t breathe anymore. After the cold shock we ran across the sand into the hot spring with 38 degrees, which felt totally hot after the cold ocean water and stayed there relaxing for the next half an hour.

The experience was extremely adventurous for me and I am grateful my friends dragged me into it; otherwise I would regret not doing it.  I already told them I am coming back to do it again, but this time without screaming and weird expressions on my face.

Iceland – a cold country with a warm soul
Rate this post