I was 23 years old and didn’t have any experience about leaving my country by then. First time in my life, I took the plane to Japan in 2011! Even when I think of it now, it still seems like a dream in a deep, deep sleep.

During the time I was doing my best to graduate (because of one failed course and belated thesis) and I had been working in a life-sucking job for already 15 months – at a call center – when I started to think of already having enough of it. Going to my classes before noon, catching to work between 16:00 – 01:00 and getting home to have shower and sleep for a couple of hours only, I had the worst days in my life without any enthusiasm, joy and any other sparkling of life. Moreover, I had to convince myself that I was so lucky to get that job, to be able to pay my bills! It took me a couple of months before I start to question the conditions I was working in: in a building with hundreds of people, without windows, only with the air-conditioning (which later caused me to suffer from pharyngitis), 3 times break for 10 minutes and you had to eat your lunch/dinner in 30 minutes only. Besides surrounded by people, excluding the students who had to work there for their expenses, whose visions were to retire from that company.

During my education (I studied Japanese Language and Literature) I already had chance to meet many Japanese students and became friends with them. I was also fortunate to meet a Japanese couple (my lovely friends Yoko and Taka) in Marmaris in the first year of my education. (Because usually anyone can hardly see a Japanese tourist in Marmaris). Having a great admiration to the culture since high school, it was one of my biggest dreams to learn/speak Japanese, let alone going to Japan. 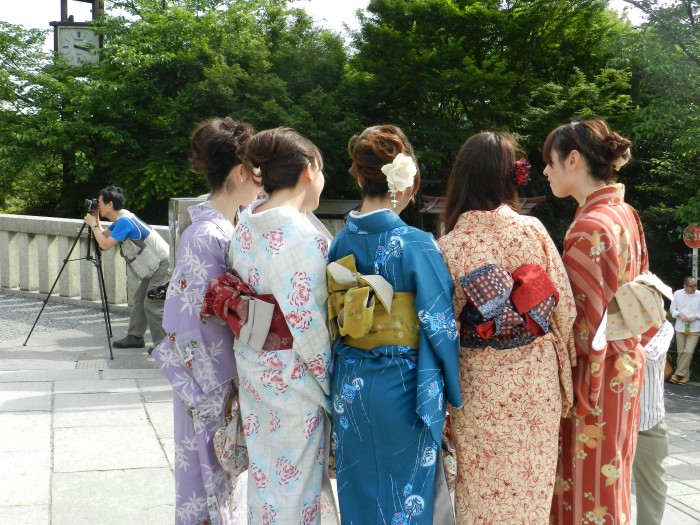 Finally I graduated, then I bought my ticket and resigned at my job. I was super lucky to have my Japanese friend Yuko (whom I met in November 2008 during her exchange program in Ankara) to go with me, if we think that I didn’t have any traveling experience before, I had a lot of questions and worries going through in my mind. Since I met Yuko, we spent most of our time in Ankara and on some holidays, we had a chance to go to Marmaris and enjoyed leisure time. However, it was going to be a new experience for us to travel out of Turkey for the first time, and it was to Japan! 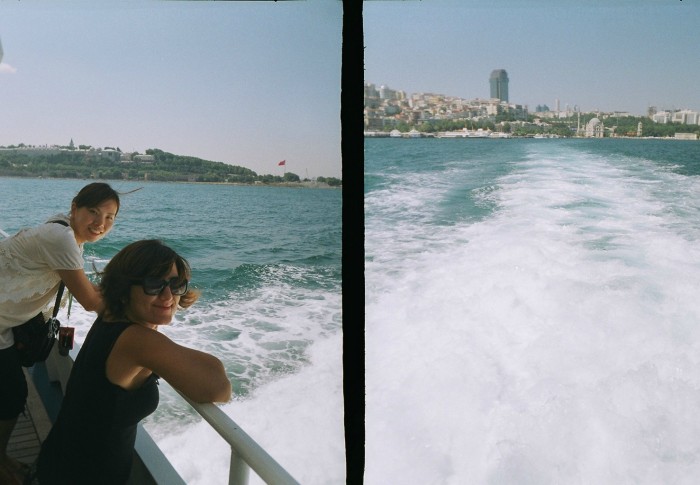 I bought my ticket before the big Japanese earthquake on March 11, 2011. I still remember the day that one of my friend woke me up, calling and telling me to open the live TV news. I was totally shocked to see the the tsunami going all over the place and I couldn’t say a word. Our ticket date was 16th of March. Because of a few people making some dramatic and scary comments about Fukushima, we even intended to postpone our tickets, however, it was way to expensive to do that, so we eventually kept our tickets. My heart and my mind were all messed up, first time I was going to travel to a country and it was to my dream country and that earthquake happened, causing countless of casualties, damage and on top of that a nuclear power plant exploded.

After a long, exhausting connected flight, we landed on Narita International Airport, and it was me who felt like in a wonderland. Even though I studied the language for 4 years by then and learned most of the things about the country, history and stuff like that, yet Japan looked to me totally different than any other part of the world. Or maybe it was my first experience and I didn’t have any other place to compare. Anyhow, it didn’t need a comparison. I was stunned by Japan from the get-go.

In the first week of our arrival, I could see the influence of the catastrophic disaster: minimized timetables of the trains, cleared out stores due to the help/donation to the north of the country and still continued aftershocks, but yet the people were still keeping their composure. Stillness was all over the place and as a Turkish who is scared of the earthquakes to the death, I wasn’t scared at all, well, to be honest I was scared a bit.

While we were accommodating in Yokohama, waiting for the train route to the north to be fixed, we met some friends, sight-saw in Tokyo, went on the top of the Tokyo Tower, ate at Izakaya (a type of a place where you can also eat while drinking) and I was trying to photograph everything I saw, as everything was adorably cute, interesting and just elegant. Going to the north – Yamagata the place that I was going to home-stay in the next months, Yuko accompanied with me for a couple of days, to help me getting used to the area a bit more. 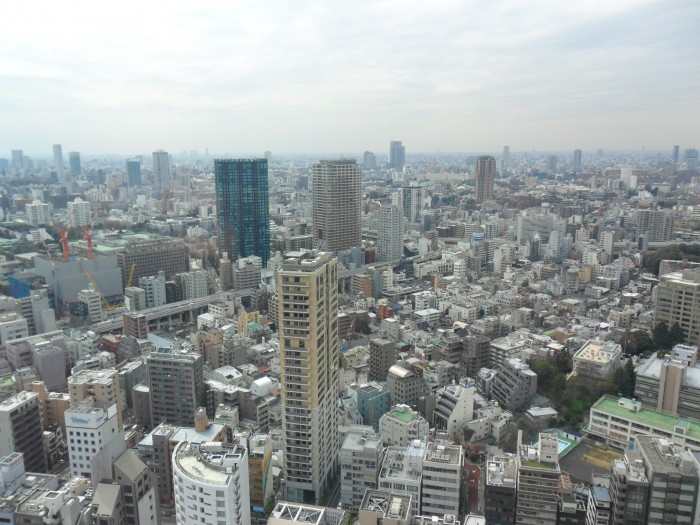 When I arrived to Yamagata, there was still snow everywhere and it was very cold. In the beginning, as there wasn’t a lot/any coeval of mine, I was spending time on my own mostly. I had a bike fortunately, I discovered a movie rental shop to improve my language, and even went to the city library. Later I was even registered to the local sports hall and joined the table tennis team where I was the youngest and the population of the group was at least between 55-85 yrs, literally. Near the gym, I found a really nice spot by a small lake and I spent most of my time there on my own; painting, reading and photographing around. For the first time I was really lonely, not that I asked for it, but there was no one to make friends. I was my only friend and I was speaking to myself inside of my head most of the time, while cycling and walking around. Japan taught me how to be friend with my own being. 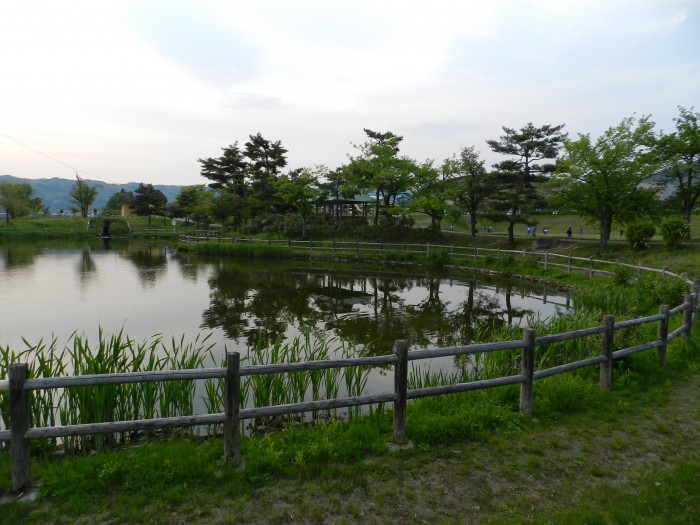 Beautiful view of the place that i was spending time at.

Some times later I was incredibly lucky that everyday something came up and I found myself journey within the journey. Meeting with local families, I was invited to their homes and I was taking notes of everything I eat, hear, learn and see. Everyone was so kind to open their doors and welcome a stranger into their house, sharing their warming green tea and the delicious snacks that I loved to my bones. Day by day, I felt less Gaijin (outside person) and feeling more into the daily life with the habits. On the other hand, I was shape-shifting because of the delicious Japanese cuisine and i didn’t have any control over myself not to eat and when to eat. It is such a rich cuisine, it would be difficult to present them all here. However, Sushi and Sake are not the only ones, as everyone knows. Every prefecture has their own kind of surprising tastes and many local drinks from many kinds of fruits and yes, rice ! 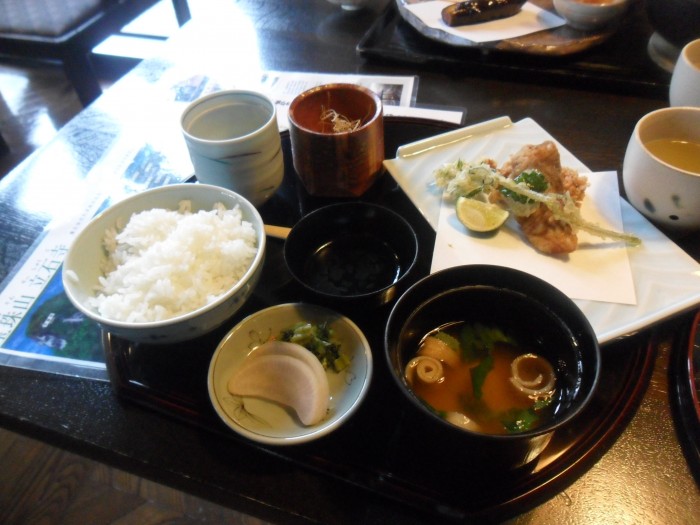 a Lunch Set from the day trip to Niigata Prefecture. 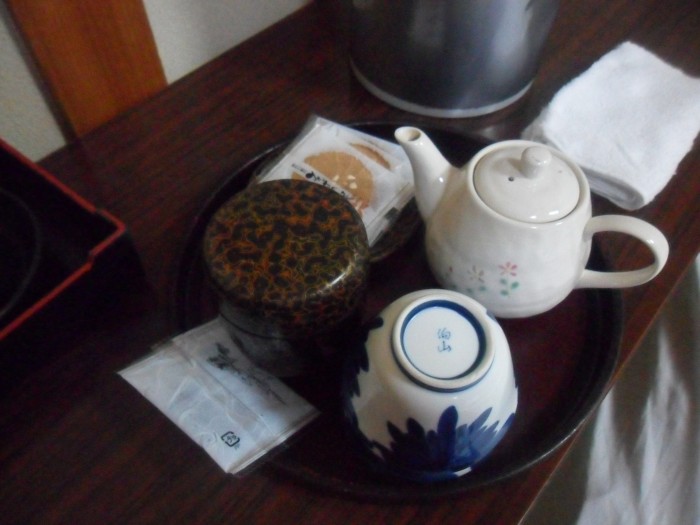 Tea times were the best times <3

Moreover, I was handling the local expressions (Northern dialect)  which was the most fun. I started to do daily trips to every district of Yamagata. Art galleries, museums, local temples, I was seeing all of it with a great appetite. Later, I started to do those day trips out of Yamagata and it reached up to Niigata, Miyagi and even Fukushima. Thanks to a local  city hall’s organization, I also found an opportunity to join them to volunteer in the most destructed areas, Ishinomaki in Miyagi Prefecture. Being at Ishinomaki 3 months after the disaster, I felt totally vulnerable with the things I saw there. Yet just in 3 months time, debris and all the rubbish were removed quite well. Talking to a survivor who lost his mother and aunt within the big waves came inside the house, I didn’t know what to say, I just listened and tried to put myself into his shoes.  After my Ishinomaki experience, I felt the world needs more volunteers in every way. 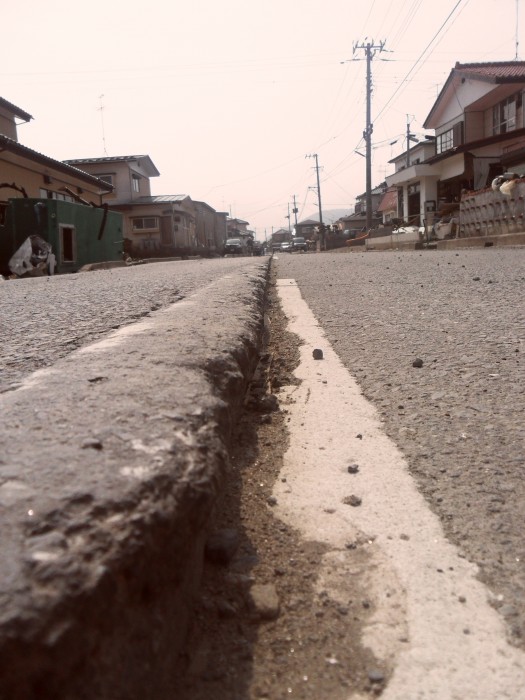 Collapsed road in Ishinomaki county in Miyagi prefecture, May 2011

Before I went back to Turkey, I had a chance to do a solo trip all the way from Yamagata down to Kyoto and back to Yamagata. I have been in Tokyo 3 times. Being a crowded city and quite expensive, it is really challenging to keep living in there. However, like every metropolitan, it was full of art, history and many other facilities. In one of the days I visited a gallery of my favourite Japanese poet, Mitsuo Aida, which moved into Tokyo International Forum. Moreover I was the happiest to intensify my Japanese History background, by visiting the Edo-Tokyo Museum where I saw a Sumo wrestler walking just outside of the museum, I could meet every friend of mine whom I met in Ankara when I was a student and also in Marmaris. I witnessed winter, spring and summer. The more I traveled within the country, the more I learned about myself. Not only I met new people, but also met a new me. I was taking a lesson from every scenery I have looked at, like I was doing when I was watching Hayao Miyazaki’s movies. 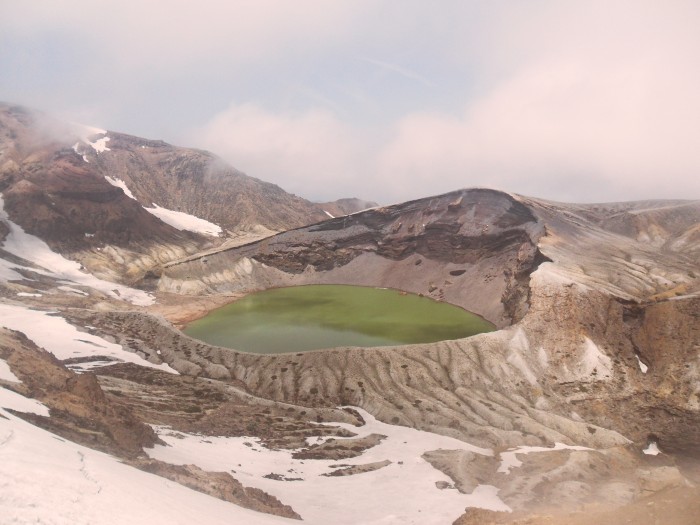 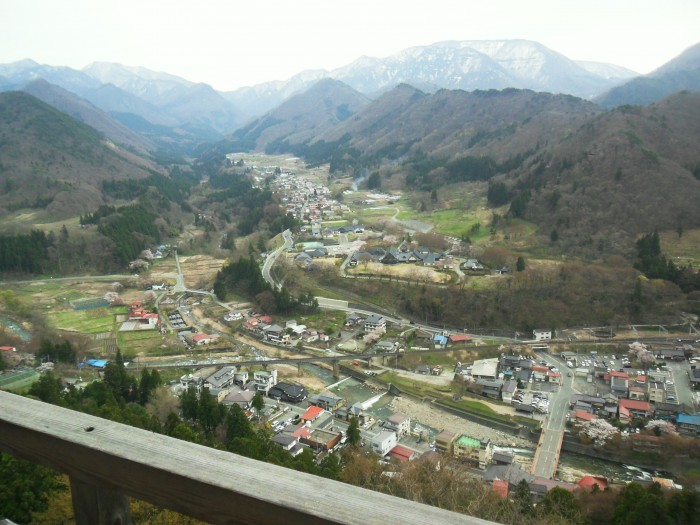 View of the valley from Yama-dera, Mountain Temple, in Yamagata Pref. Haiku Poet Matsuo Basho wrote his famous haiku “ah this silence / sinking into the rocks / voice of cicada” in 1689 at Yama-dera. 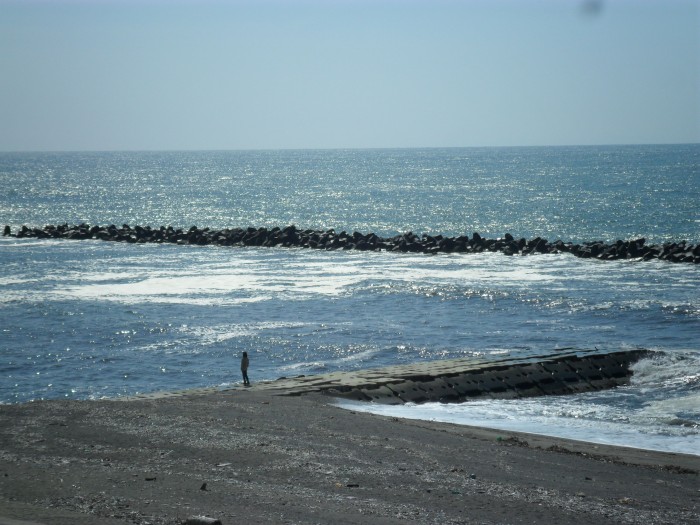 View of the Nihon-kai, Sea of Japan in Niigata Prefecture. April 2011 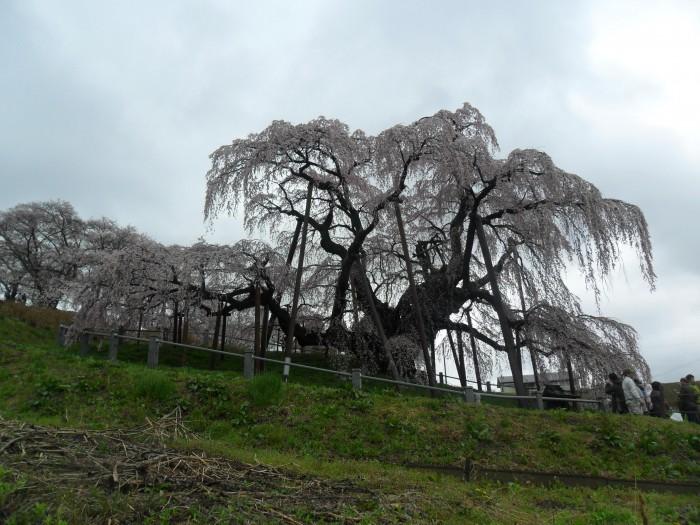 Dewa Zakura. The Great Sakura Tree in Fukushima Prefecture. May 2011 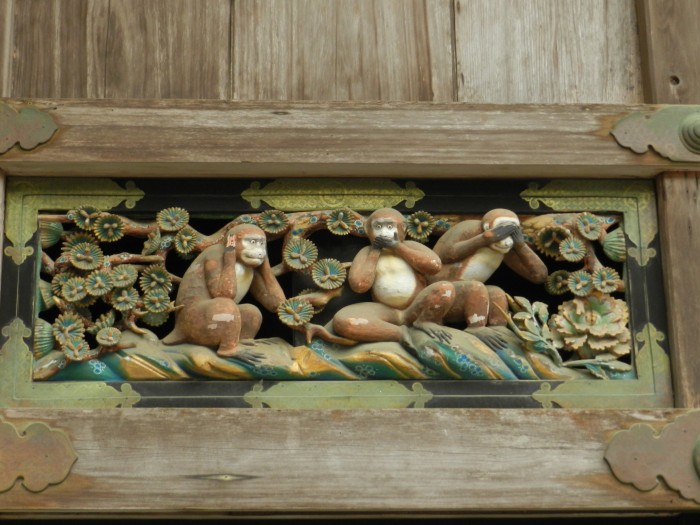 Nikko World Heritage Site in Tochigi Prefecture. where the tree wise monkeys spread the world from. Three monkeys tell us that children should Hear no evil- Say no evil- See no evil 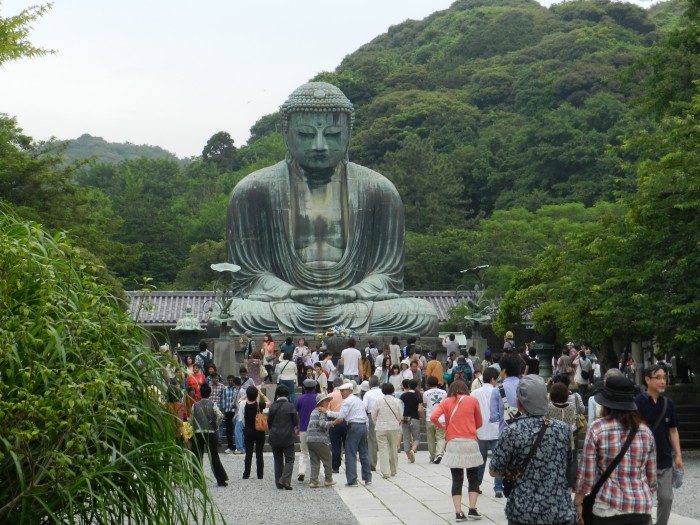 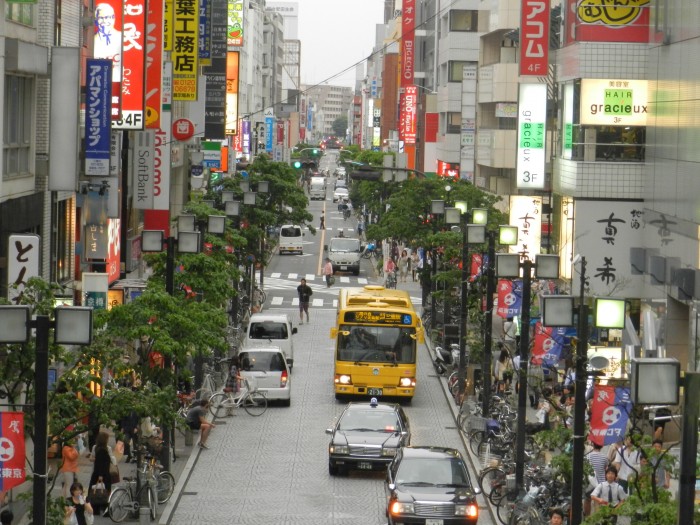 The spirit of Japan amongst the streets 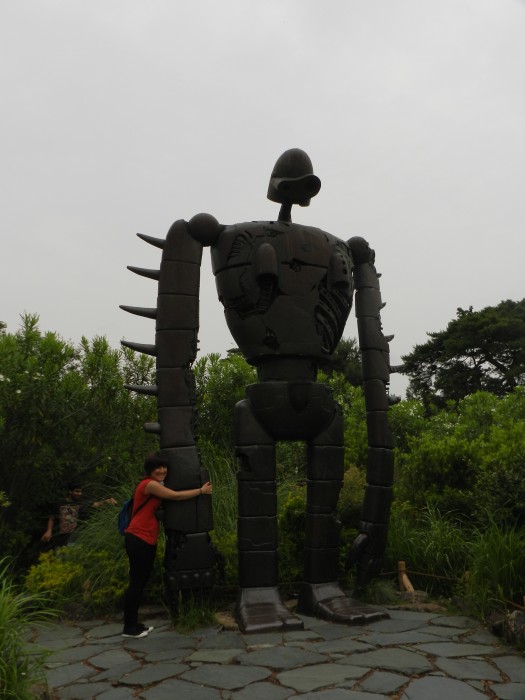 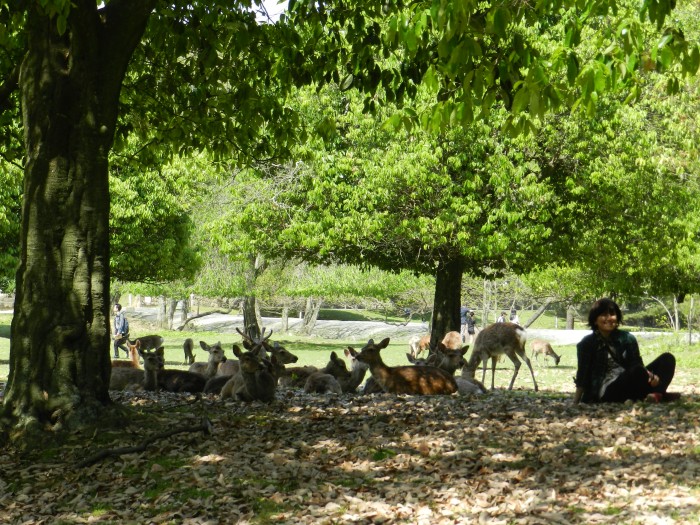 with the deers of Nara , Nara Prefecture May 2011 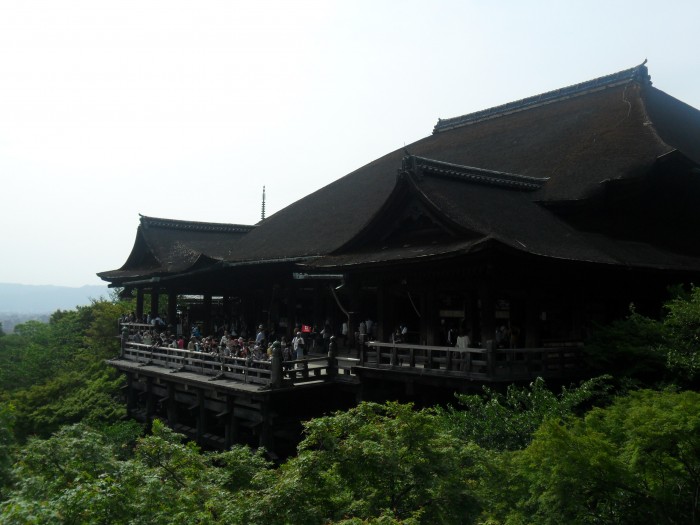 Today, four years after I went to Japan, going to be 27 soon, I still count the days for the next time I will be going back. Within the curiosity when it will be, I will be working on my personal revolution, to get closer and closer to my dreams, like a Lotus flower blooms in the difficulties.

JAPAN: where my childhood dreams came true
Rate this post