Jeju Island is located on the south of South Korea. You have quite some hiking possibilities there. As Jeju Island is volcanic Island you could expect that there would be a volcanic crater somewhere on the Island. And it is. It’s their 1950 meters high Mount Hallasan. If the sky is not in clouds you could see the top of the mountain from almost all places on the island. You can reach the top from different directions. It is quite popular tourist point – not only for foreign guests but also for locals. It is amazing how many colors you can meet there. The people there use totally different dress code as in European mountains. It doesn’t matter how old the mountaineers are, they have fluorescent green, pink, violet, yellow, orange… colors of mountain equipment. And you shouldn’t go there if you would like to be alone. I went up from east side from the village Seongpanak. You could come to the start point with local bus. 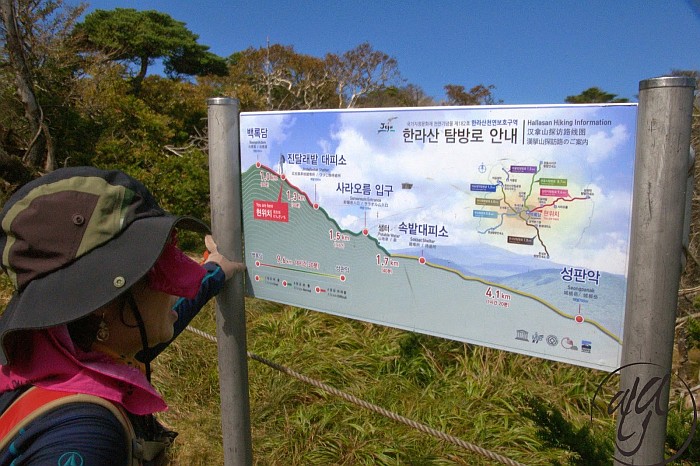 The way up goes through the forest and is very well maintained. This way from east side is about 9,6 km long. On some sections there are wooden steps instead of stones. You could not go wherever you want as there are the ropes and wires that show where to go. Perhaps in the past they had problems with some people that got lost. I was quite nervous as in the guides I had read that if you come to the check point too late, you are not allowed to go to the top. On some places among the route up there are some tables where you could see where you are. They are quite useful.

The ascent time to the top is 4,5 to 5 hours. If you are in good physical condition you could come to the top in 3 hours. On the top I was a little disappointed. I have expected big volcanic lake, but there was just “a spit” of water.

And the top was really crowded. 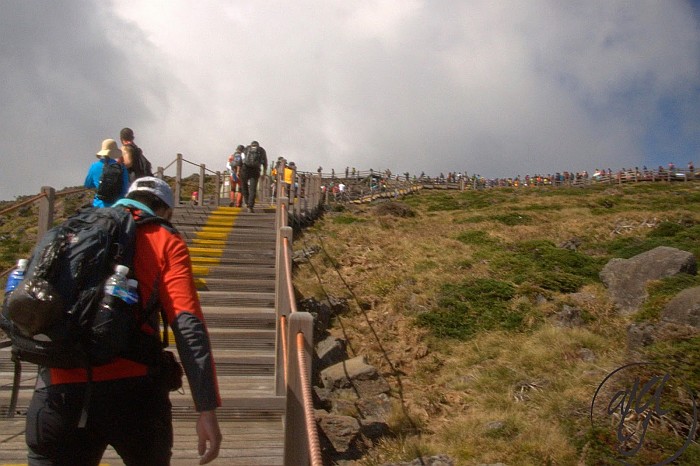 On the way down on the check point on 1500 m I saw the table with the warnings not to go further as it is too late. I went to another lake on the way down. It was quieter and it had more water. There you could enjoy the peace of the mountain. After 7,5 hours I have reached the start point.

For those who would like to enjoy the nature in peace and be almost alone, I suggest their so called “Jeju Olle Trail”. The word “Olle” was originally (in the old dialect of Jeju) used to refer to the very narrow path between the street and the doorstep. Previously, this was a commonly used word; as children would often say, “Let’s meet at the olle.” Olle word became more widely used across Korea, as a reference to a series of neat coastal walking paths on Jeju Island. The trail is divided into 21 routes mostly following the coastline. The routes have different lengths but average is 16 kilometers long and could be made in one day. You could go on one or another direction. The trail is very well marked with interesting mark – it reminded me on horse. If you go in one direction the marks are red/yellow color in other direction are blue color. You could find the marks on the trees, traffic signs, along the road… 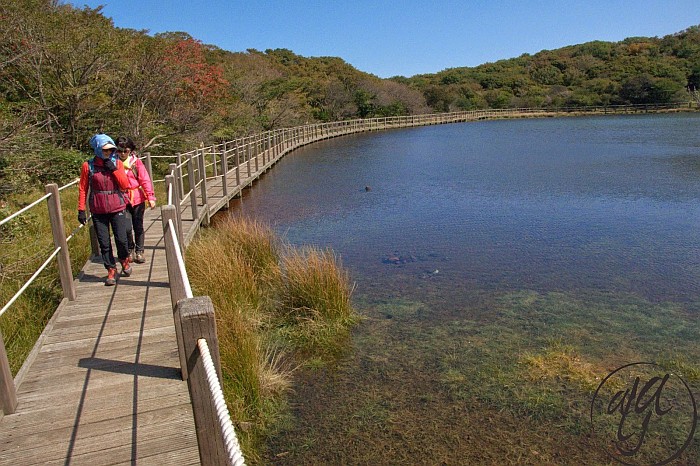 I went on south routes marked with the numbers: 8, 10 and 11. On those routes you pass some tourist points e.g. waterfall that go directly to the sea, long sanded beaches, guest-houses where their Haenyo women – women divers – sell sea food they brought from the water, the boat museum dedicated to Hamel – seaman from Holland that assimilated on the Island and has written a diary, some fossil steps of animals and humans in lava from which they has defined the age of the Island, some underground bunkers against Japanese army… You could meet the people only on this tourist points. On the other parts of the route you are alone and you can enjoy beautiful volcanic nature. If you don’t mind that you have the sand in your shoes I highly recommend these routes! 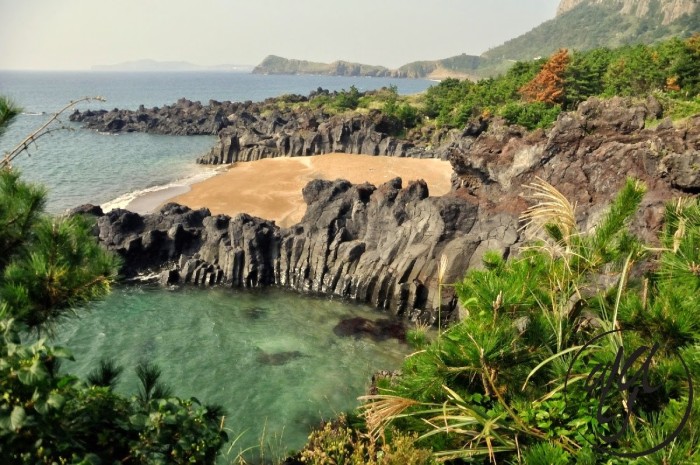