I decided on booking my holiday in Filzmoos originally purely for its range of ski slopes but as the week went by I began to realize that Filzmoos offers so much more than just your average ski holiday.

I will, however, firstly comment on the skiing/snowboarding opportunities. Filzmoos is a fairly small destination as far as its range of ski slopes go but it does have everything one could ask for: ski slopes marked blue, red and black. The black one (meaning the one intended for the advanced and more adventurous skier), I should say, is only one and as someone who enjoys snowboarding on really steep terrain, I was a bit disappointed with there only being one black slope but the sheer variety of ski slopes more than made up for that. Because it is fairly small, Filzmoos doesn’t attract as many a visitor as say, it’s neighbour Flachau, which in turn means I never had to wait in line at the ski lifts. Not once! The best thing about the Filzmoos ski area is just how much detours one can take through the well looked after forest paths. It is one thing to ski or snowboard as fast as you can down a wide lane in the vast open space and a whole other experience when you meditatively slide through a narrow forest path where you are completely surrounded by trees, momentarily forgetting you are indeed not on a wild forest ski adventure. Combine the two experiences together and voilà, the perfect ski experience.

If the weather is against you skiing or if you simply feel like you need a day off from it, there are over 50 km of cleared winter footpaths in and around Filzmoos. I went on one of these but I have to admit, I have no idea what it was called. I walked for about an hour and a half, at the end arriving to a lake (the term is used loosely) and a nice little cottage for a much needed drink (I’m talking about tea!). The lake is a lovely sight to see among the surrounding mountains and the abundance of snow around it. It took me all of 3 minutes to walk the full circle around the lake. Now, on for tea! 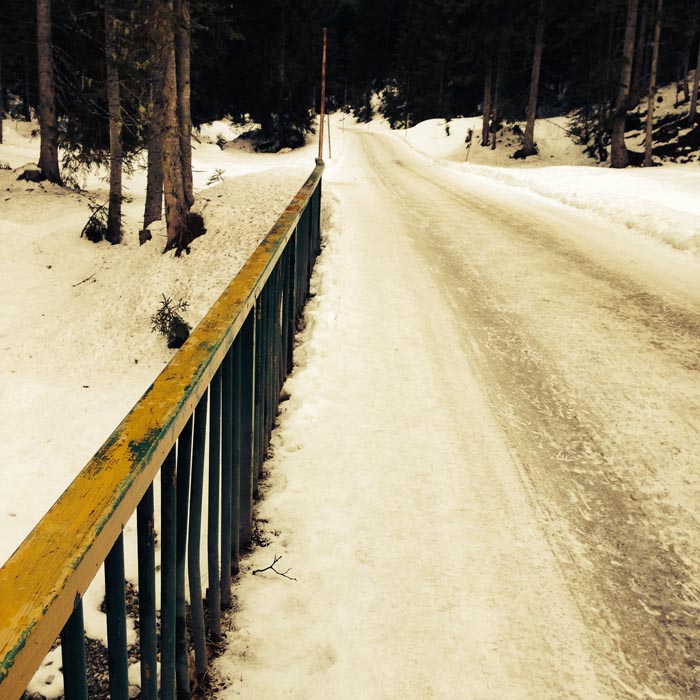 A walk through the snowy landscape is a feast for the eyes #nofilter (well okay, #yesfilter) 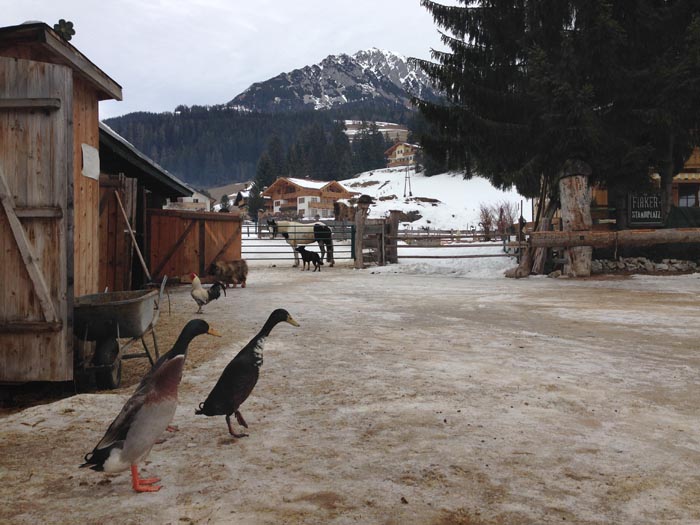 Encountered on my walk: These little ducks. Can you spot the third one? 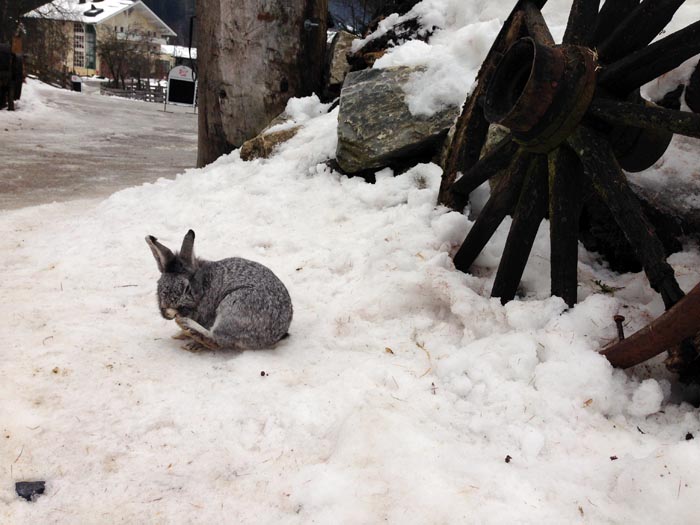 And this little guy. (Yes, I am aware I have a slight obsession with including pictures of animals. The first step to recovery is admitting you have a problem.) 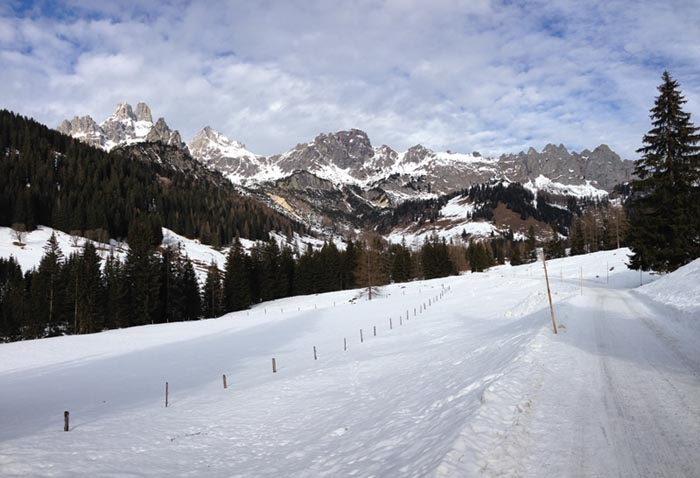 THE VIEEEWWWW (It’s not ew at all!)

Having had a nice chat with one of the locals really opened my eyes about how much there is to do in this charming Austrian village not just in the winter months but in the summer, too. Loads of people who come to Filzmoos in the warmer months go there for its hiking trails (some of which serve as ski slopes in the winter) and the amazing views they offer. Filzmoos is a destination worth considering for anyone who likes mountain climbing, as the Bischofsmütze Mountain offers over 300 climbing routes, trails and parks. Numerous bike routes are ready for both mountain bikers and road cyclists to enjoy. There are also a lot of other organised activities available such as tennis, archery, fly-fishing, golf and horseback riding. If you don’t mind being away from the sea for the summer, Filzmoos really is the place to go. Unless you’re like me, which means you’d spend 99% of your summer holiday daydreaming about snow and snowboarding and those sunny winter days you spent sliding down the mountain in blissful ignorance of the world outside your snow-infused bubble. 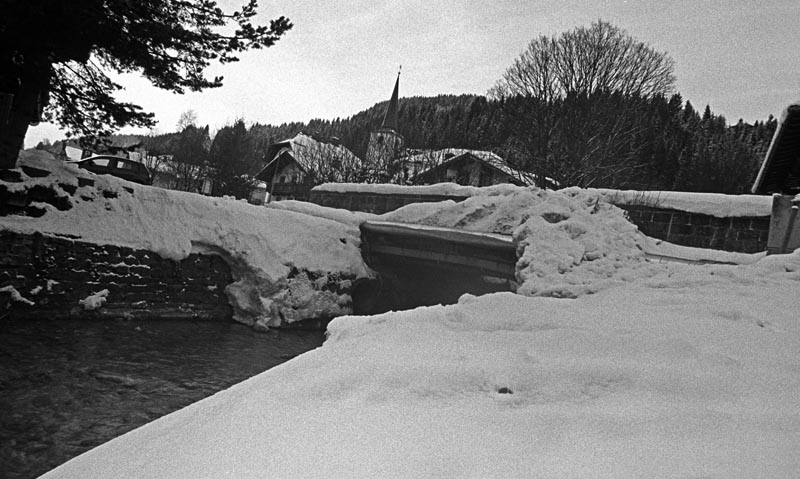 A change of perspective: Filzmoos through the lens of an old Zenit camera. I swear this photo was taken this millennium.

Apart from its winter sport activities, Filzmoos is actively gaining a reputation of being something of a balloon village. In fact, you will rarely go a sunny day without seeing at least one hot air balloon above you. Most of these fly over the valley to offer their passengers a majestic view of the Bischofsmütze mountain, which is the highest mountain of the area with two peaks, the Large Bishop’s Mitre (2,454 m) and the Small Mitre (2,428 m). From a distance it looks like there is only one peak, which takes the shape of – as the name would suggest – a bishop’s mitre. 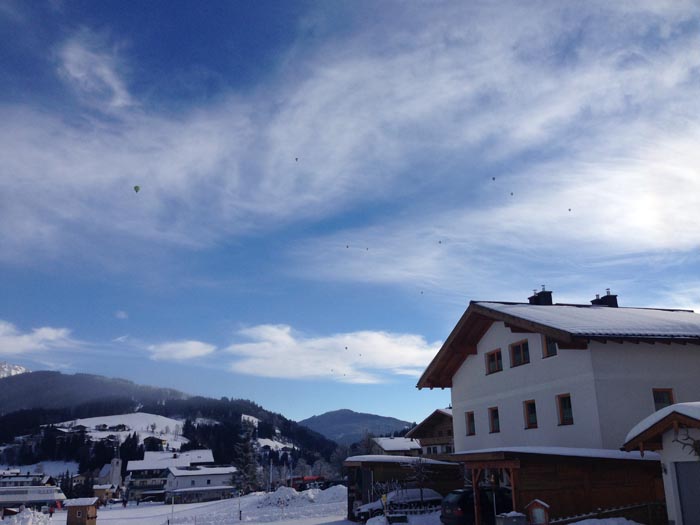 I was lucky to be in Filzmoos in time for one of their balloon weeks – look how many balloons there are! These are not specs of dust on my lens.