Situated about a half hour away from the city centre on the southern slope of Rožnik, the Ljubljana Zoo provides a great field trip. If you’re like me, someone who will take any opportunity to hang out with various animals, you’ll want to visit the Ljubljana Zoo. The zoo is part of EAZA, the European Association of Zoos and Aquatics. The members of this association do not sell animals to one another but rather, are loaning them to one another (or exchanging them, for lack of a better word) based on the needs of each zoo and on what’s best for the animal in question. The Ljubljana Zoo’s animal population changes from time to time but at the moment, it has 119 species of animals, a total of 500 individual animals.

Having already made the decision to go to the zoo at this time of year, I wasn’t sure whether it was a good idea or not, as I thought the animals might all be in hibernation due to the cold weather. It turns out this was not the case. As luck would have it, the day was the warmest we’ve had in a while and so the animals were actually really playful and full of energy. You know you’re in luck when you see giraffes running and tigers playing. But I’m getting ahead of myself.

Upon entering the zoo (the ticket for which cost 8€), I decided to follow the left rule, basically turning left at every crossroad, in this way making sure that I’d cover all the ground in the end. The first animals I saw were meerkats. All I wanted to do was stand there all day, watching them play. It was then that I realized I’d need to put some kind of time limit on how long I could stay with each animal, as I don’t think the zoo allows sleepovers. Next, I came upon the giraffes. Oh, the giraffes! While I was walking over to them, they were walking towards me. I think they might have just let them outside from their little indoor area. It looked like a giraffe migration! And it was glorious. At one point one of them was running around, the other scratching its head against a third one. The giraffes are enclosed in the same area as the ostriches and at one time, an ostrich started running toward a giraffe, spreading its wings aggressively, the giraffe backing away from it. What a sight to be seen! Wait, what time limit was I talking about before? 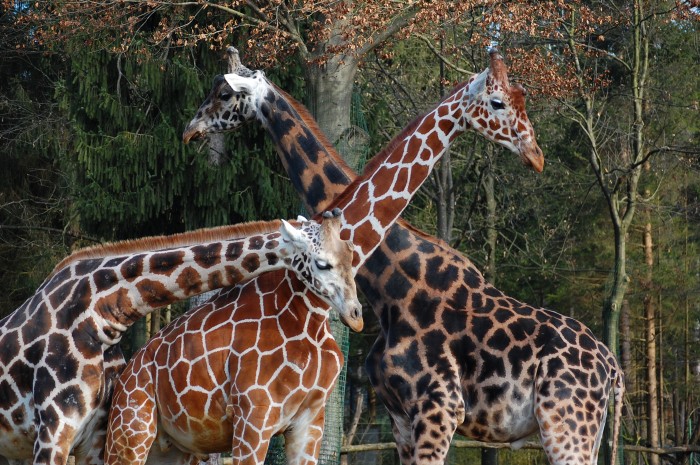 The Ljubljana Zoo has a nice playground area for children, which was being put to good use (this time by actual children, not just myself) even if the playground sets weren’t entirely dry yet. There is a bar/café area there as well, which (much to my surprise) was closed. 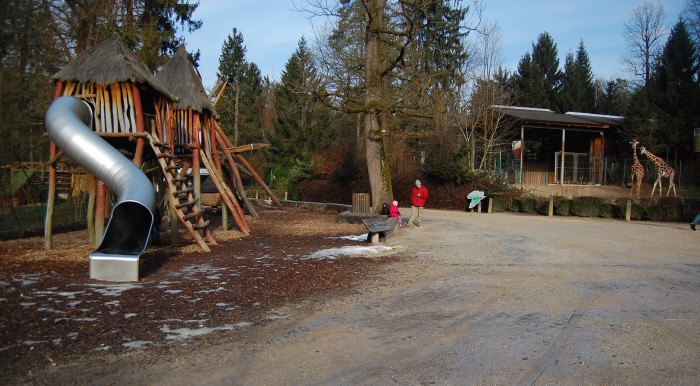 Taking another left turn, I came upon emus, kangaroos and llamas, all in separate areas of course. I noticed one of the kangaroos shaking (or twitching) every now and then, which might either be due to the cold or maybe fleas? Poor guy. 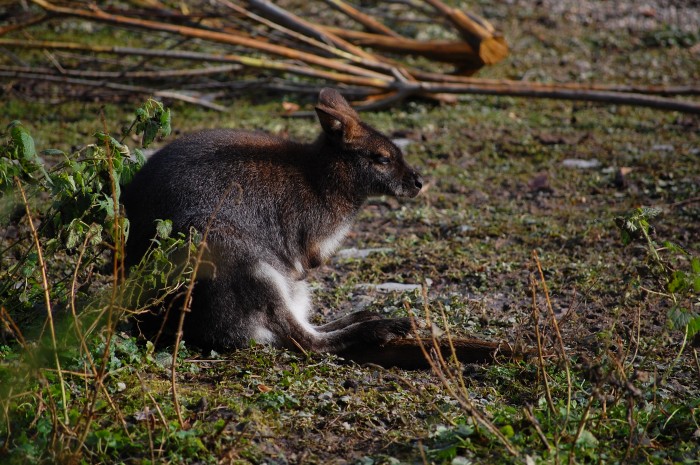 Next was the reptile area. I’m glad to report that none of the windows disappeared and all of the snakes stayed in their designated areas. I would’ve liked to have a chat with some of them though. Were they imported from Brazil or were they raised in the zoo? These are questions one wants to ask a snake, aren’t they?

Then I saw the two red pandas! I think they might be my favourite animals in this zoo. Although granted, I pretty much said this to myself regarding 80% of the animals. The pandas were sleeping the entire time, one of them constantly changing its sleeping position, in the process melting my heart. It reminded me quite a bit of a house cat, which is probably why the red panda is also referred to as the red-cat bear. I’d be lying if I said the thought “would they notice if I took it home under my sweater?” never crossed my mind. 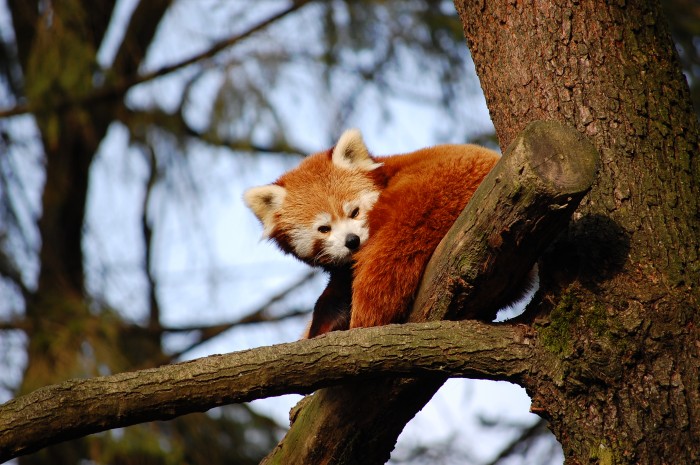 The tiger area in the Ljubljana Zoo is new and quite brilliantly made, as it allows one to see the area from all sides, in this way ensuring a view of the tigers even if they are lying in a far-off corner. Additionally, this area is quite big so it looks like the tigers have plenty of space. There are two tigers, both kept in separate but adjoining areas. At the time I was there, they had just let them be in the same cage together so they would socialize (by this I mean breed) and socialize they did (this time I mean play)! They were playing, clawing at each other and chasing each other across the area. By the looks of their dynamic, I would say it’s likely we won’t see the little ones for quite a while but maybe they’re not ready to raise a child just yet, you know? Not in this economy. 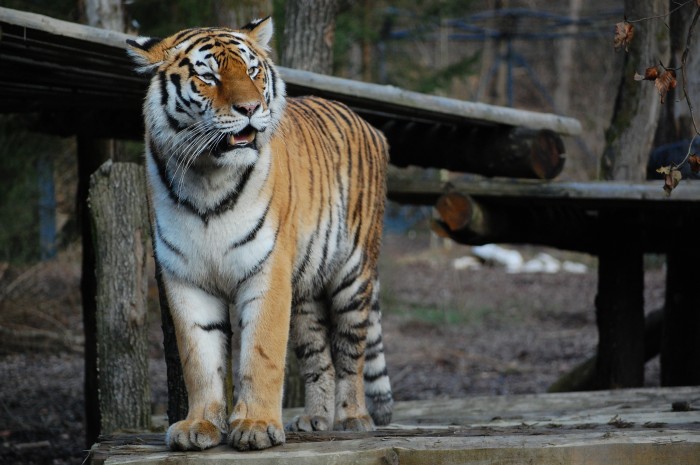 Ljubljana Zoo: One of the Siberian tigers

Slowly and I mean s-l-o-w-l-y moving past the zebras, brown bears, chimpanzees and sea lions, I found myself at the cheetah area. The cheetahs are fairly new to the Ljubljana Zoo, as they’ve only come here in 2013, the Ljubljana Zoo never having hosted cheetahs before. They had just put the two cheetahs in a small indoor area in order to set out food for them outside. After a while, they opened the trap door again so the cheetahs could feed. The speed at which the two ran to get their meat! And people say cheetahs are slow. Or is that turtles? They had laid out two pieces of meat for the cheetahs but for some reason they both started eating the same one from different sides. It was like Lady And The Tramp. True love, clearly. 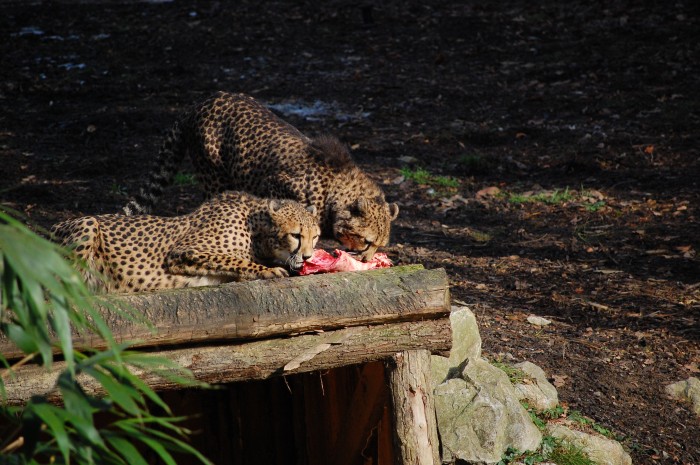 After finally being able to tear my eyes away, I went to the last area of the zoo, the petting zoo. Being able to pet the animals was the perfect way of ending this zoo trip. There they had horses, pigs, donkeys, cows, sheep and goats. Needless to say, I made some really good friends that day.

One thought on “Visiting The Ljubljana Zoo”