There is a beautiful island in the easteran Mediterranean. Island of Venus. An island which is divided. An island with the last divided capital city. Cyprus. The norhtern part of the island, oficially known as the Turkish republic of Northern Cyprus (TRNC/TCKK) is defenitely worth visiting! Since 1974 the northern part hasn’t changed a lot. 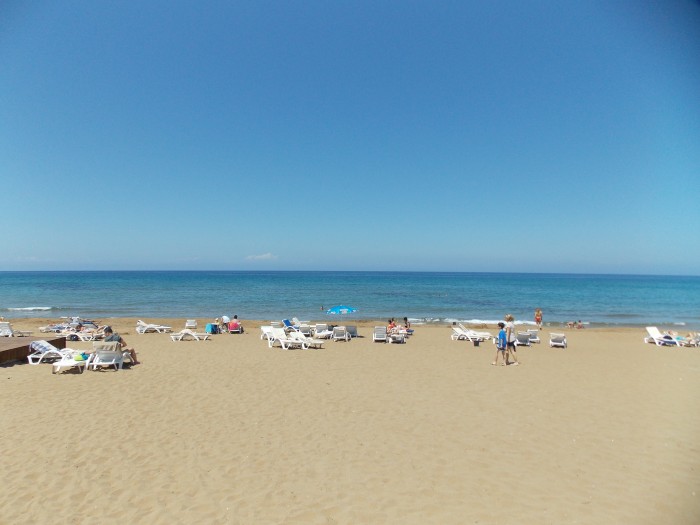 Most of the big hotel complexes are in the south part (Greek part) of the island, that’s why the northern part offers beautiful (isolated) beaches and no massive tourism. Of course there are also some big hotels and casinos in the northern (Turkish) part, however the coastline hasn’t been destroyed (yet). Cyprus, with its rich history, is also a great place for the cultural turism. 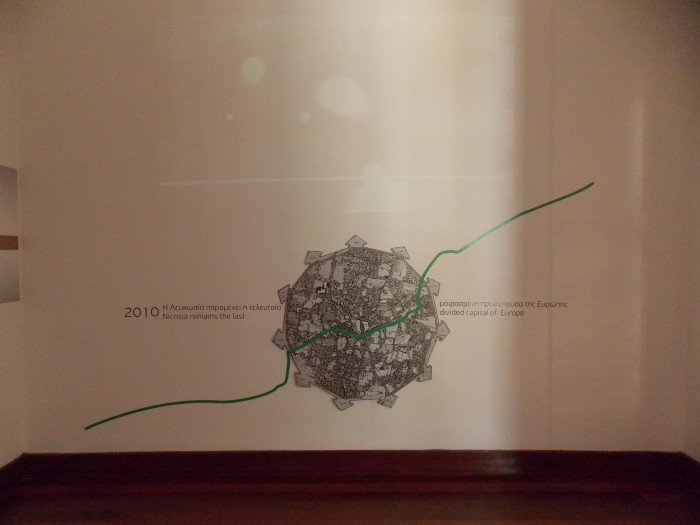 In the past, Assyrians, Persians and Romans conquered the Island. Marcus Antonius gave the island to Cleopatra. After this Byzantines ruled in the island. During the Crusades the Knight Templars and Richard the Lionheart of England ruled here. Later on the Genovese and Venetian owned the island. A very rich history indeed!

Today, in a way, the northern part resembles Turkey. You can eat your kebap, drink turkish coffee or smoke hookah. If you want to taste a Greek food, all you need to do is to pass so called Green line – a line which divides island to north and south. Of course, you cannot cross the border anywhere! But don’t worry, if you hold an european passport, crossing is very easy.

Lefkoşa is the capital of the Northern Cyprus. It seems that time has stopped here. There hasn’t been many changes in the cityscape of Lefkoşa in the last 30 or 40 years. This makes this city unique. In Lefkoşa there are many historical places, but 2 defenitely stand out: the Selimiye mosque and the Büyük Han (Big Han). Büyük han was built in 16th century, after the Ottomans conquered the island. 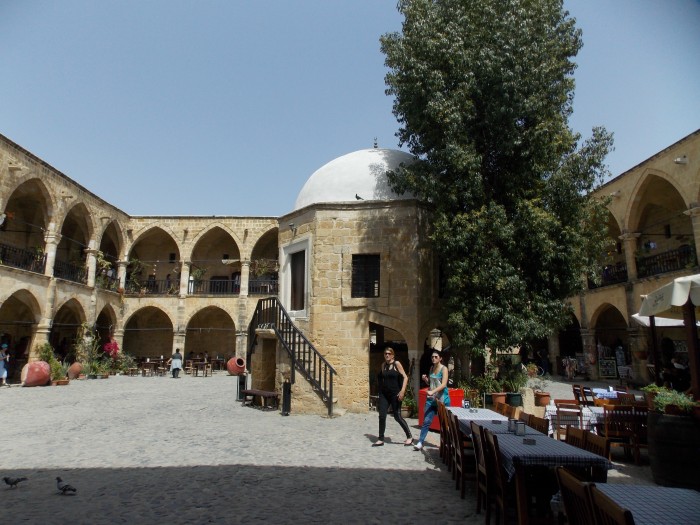 The courtyard of the Büyük Han

The Green line, as the line which divides the island is called, crosses also through the capital city. The zone is from 20 meters to up to 7 km wide. It’s a buffer zone of United Nations, it’s forbidden to enter it and of course, you must take no photos! Anyway, when you cross from Northern to Southern Cyprus you also cross the line. At the pedestrian border, the line is about 20 -30 m wide. While crossing it, you can see the old houses which remained there just as they were in 1974. 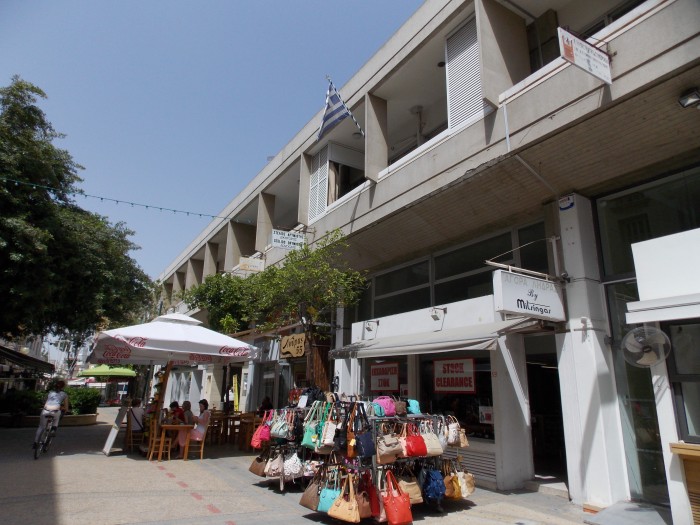 Nicosia – after crossing the Green Line

Girne, also known as Kyrenia, is famous for its castle. The castle was built in 7th century, when Byzantines wanted to protect the island from the attacks of the Arabs. 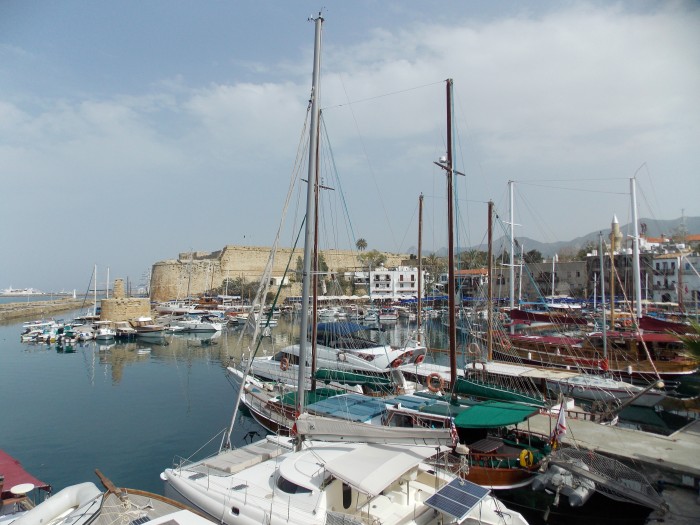 Girne – harbour and castle in the background

Girne is a bit more touristiy city than Lefkoşa, since it has some big hotels and casinos. The old harbour is very nice, some even call it one of the most beautiful harbours of Mediterranean.

Only about 7 km from Girne the Cyprus’s most beautiful village is located. It’s called Abbaye de la Belle Paix (The Valley of Peace), or shorter Bellapais. The name derives from the gothic abbey which was built there by Premostratensian order in the 13th century. 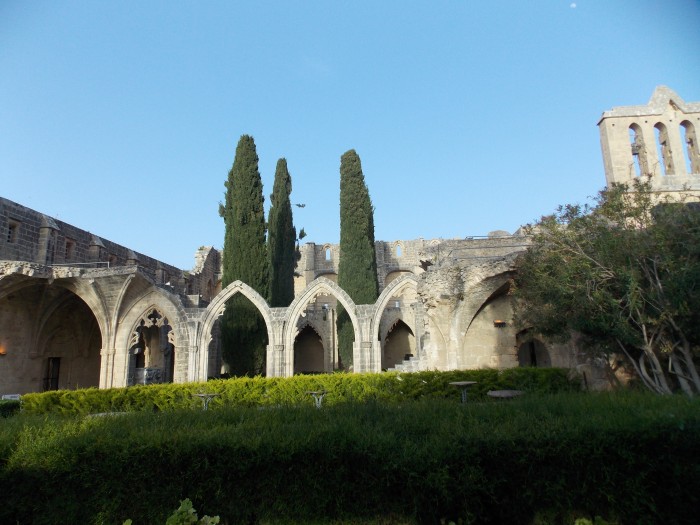 Today there is a museum in the abbey. Bellapais is located on the hill, that’s why it offers a beautiful view. 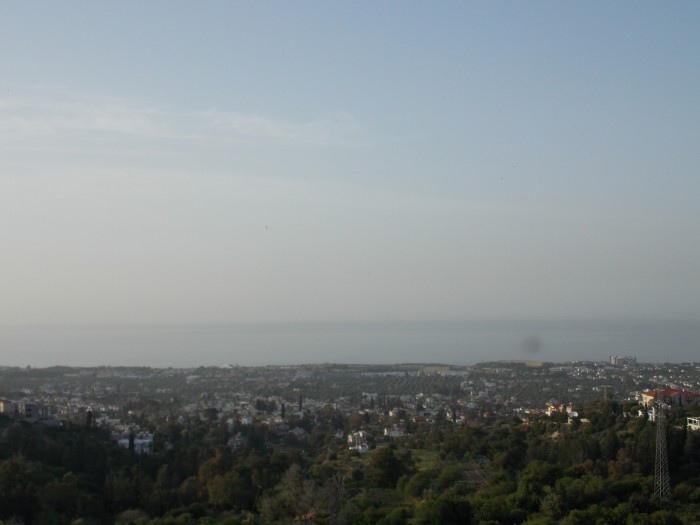 Gazimağusa – the cıty of ghosts

Today, Mağusa is a student city. One of the 4 universities on the island has its campus there. In the old city center you can visit old Gothic church converted into and Ottoman mosque.

Until 1974, the city was the most developed and touristic city on the island. Some even say, that some of the best hotels were booked for years in advance! Today, once the most touristic and developed district, called Maraş or Varosha, became the city of ghosts! Unfortunately, it’s forbidden to enter it, however you can check this short video about this ghost city. It’s very interesting.

If you walk a few kilometers along the beach from the Ghost city you will come the the ancient city Salamis. Today there is a museum there and you can see Greek theater, baths, etc. 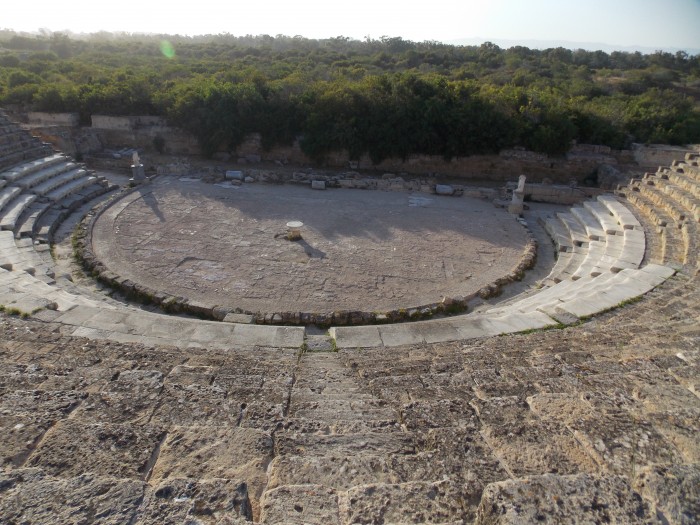 The oldest findings in Salamis were dated in 11th century BC. 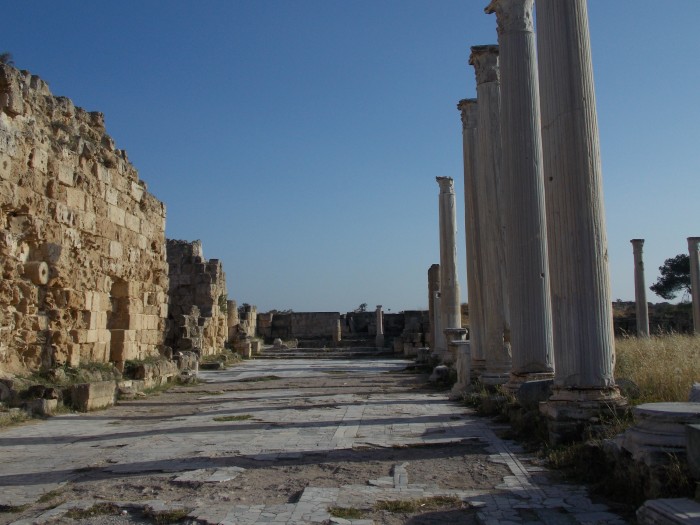 The Island of Students and the City of Ghosts!
Rate this post