Rhodes lies in the eastern Aegean Sea and it is the largest among all Dedocanese islands. A border with Turkey is only 20km away across the sea. It is said that sun shines almost 300 days of the year which is probably because constant light wind keeps all the clouds away. Northern part of the island is much more windy than the south. Northern part of the island can be a real paradise for surfers and kiters, while families, older couples and those who just want a peaceful holiday, will probably prefer to remain on the southern part. 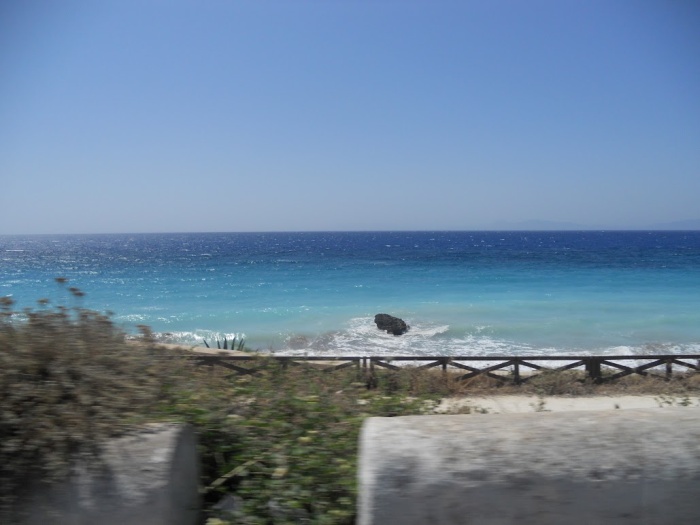 We’ve spent 7 days on this beautiful island. Our hotel was in a low profile seaside resort called Kolymbia on the north east coast of Rhodes. On the first day we rented a small car, which was with us for the rest of our holidays. First we visited Kalithea, which is a town 8km before the city of Rhodes. We stopped at the beach where there is local spa since 7 century BC because of numerous active springs of healing water from the surrounding rocks. When Rhodes was still under Italian occupation, they began to examine this water and architect Pietro Lombardo renovated the ruined spas. Today the price of admission in the spa is 2€. Ancient bathroom is still part of the restaurant complex so there is no access to it. Whole area can really take your breath away. An emerald lagoon just drags you into its embrace. On the beach there is also a bar with a small kitchen both built into the rock. If you want you can take a walk through carefully tended garden or hide from the sun in a marble pavilion. 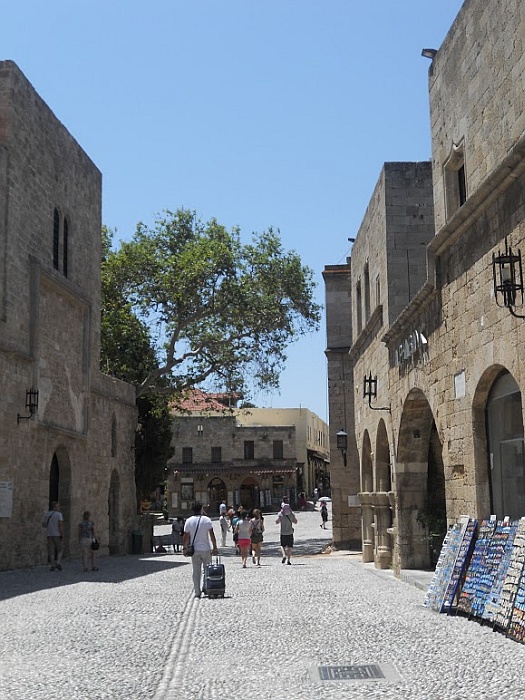 Then we went to the city of Rhodes. The mighty walls of the old town embrace the ancient streets and buildings. At the beginning we found the remains of the temple of Aphrodite, which is located between today’s Rhodos’ main port and the ancient military port Madrataki. The Aphrodite’s temple dates back to the 3rd century BC. It was built out of sandstone and decorated by Ionic columns. The famous statue of Aphrodite Pudica which today stands in Rhodes’ archaeological museum was found in this temple. In the Archaeological Museum of Rhodes you can see an enormous collection of findings from all Dedocanese islands from the classical era, the Hellenistic period and the Roman period. Entrance in the museum costs around 6€. 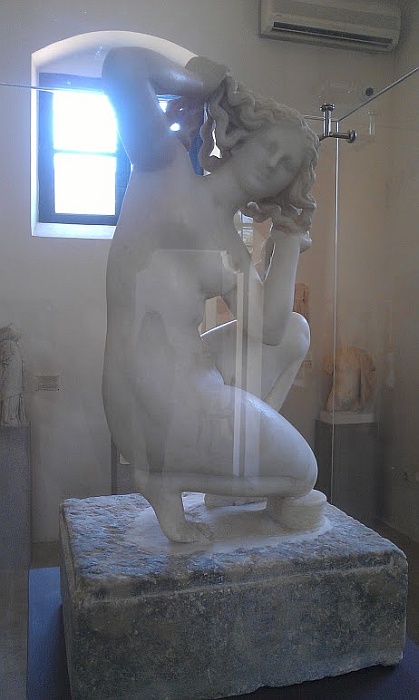 Before we drove out of the city of Rhodes we could not miss the main point of interest which is raising a lot of questions for many centuries. I’m talking about one of the seven wonders of the ancient world, the famous Kolosus. Kolosus would be a statue of Helium, the god of the sun, which stood at the entrance to the port of Rhodes. It was built in the honor of Rhodes’ victory over Cyprus. Ancient records tell of his amazing height which was apparently more than 30m. It is said that the statue collapsed in the year 225 BC because of the terrible earthquake. Where are his scraps, unfortunately we do not know. Today the port is guarded by a doe and a deer each on its own column­. 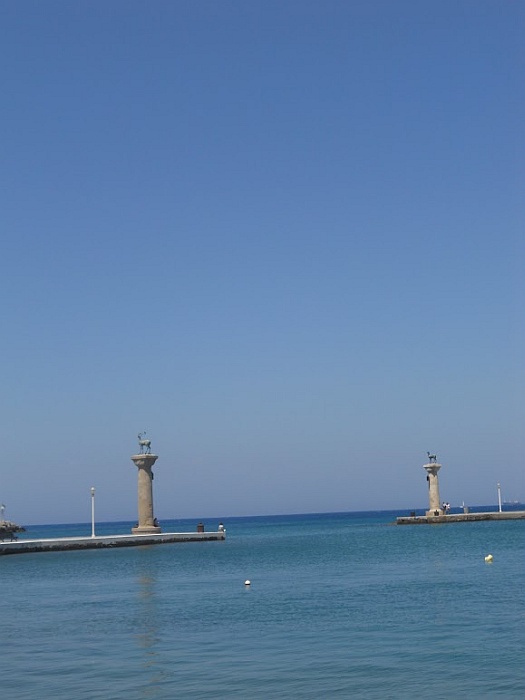 On the western side of island Rhodes lies the Valley of butterflies. I was a bit disappointed as I expected to see numerous different species of butterflies but the only butterflies that we manged to see were the Euplagia quadripunctaria rhodosensis. True, they were on the every tree and bush around us, but when they were still it was really hard to notice them because of their brownish colour. Even so, when they spread their tiny wings you can admire their magnificent bloody red colour. Overall the valley is not that impressive as one might think. I was a bit disappointed due to the fact, that an official store at the entrance of the Valley was selling dead butterflies, scorpions and cockroaches which didn’t really coincide with the whole »nature conservation« principles they are trying to promote. 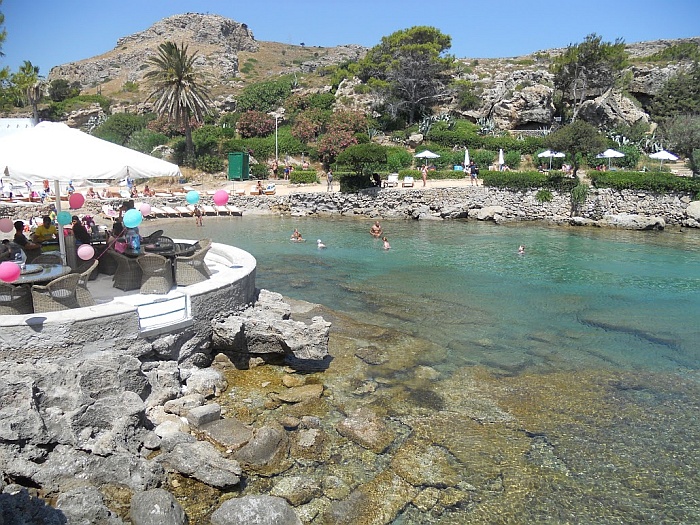 15 minutes north of Kolymbia you can find a beach called Ladika. This beach is famous because it was a filming location for the movie Zorba the Greek (based on the novel Nikos Kazantzakis) back in 1964. The beach also got it’s second unofficial name after the main actor Anthony Quinn. 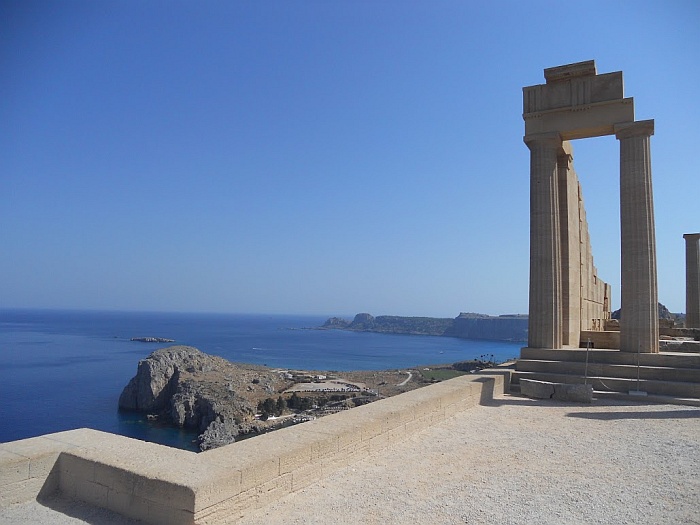 My absolute favourite part of the island was the city of Lindos. White houses, blue window shutters, narrow streets and another beautiful lagoon which can really take your breath away. The city is located on a hillside and on the top of the hill lies an ancient acropolis form the 6 century BC. The view from up there is spectacular.