Just  a month after my “triple trip” to Former Soviet Capitals, I flew to Brussels to meet my friend Yuko, as it has been a while since we saw each other. She moved Belgium half a year ago, because of her work. It was my first time in Europe and I cannot describe it enough with the right words. Once it was like a dream to me, and then I made it real. When you achieve something easily or have much of it , they say you may not know the value of it, or may get bored easily, well that’s not true about traveling. At least not true for me, either. It would be impossible to feel less or amaze less, no matter how much you have of it. Life is not something  you can spoil yourself on, and therefor less appreciate it.

I got my first smart phone (by strong suggestions from my crew friends , saying my current phone was “outdated) in summer 2014, when I was 26. The only and maybe the best side of having it while traveling, is the comfort of using the Internet wherever you are, as long as there is wireless connection available. However, not having an operative sim-card gives you a lot of adrenaline, when you don’t have the comfort to call/reach anyone at anytime. I experienced that when I was waiting for Yuko at the Charleroi Airport, searching for a free connection, however, couldn’t find one and kept looking for her. About twenty minutes later, or a bit more than that, I saw her rushing around and I grabbed her arm from behind. It was just like millions of other huggings at the airports, laughing loud and not being able to control the volume of your voice, while talking around trying to grab the luggages. 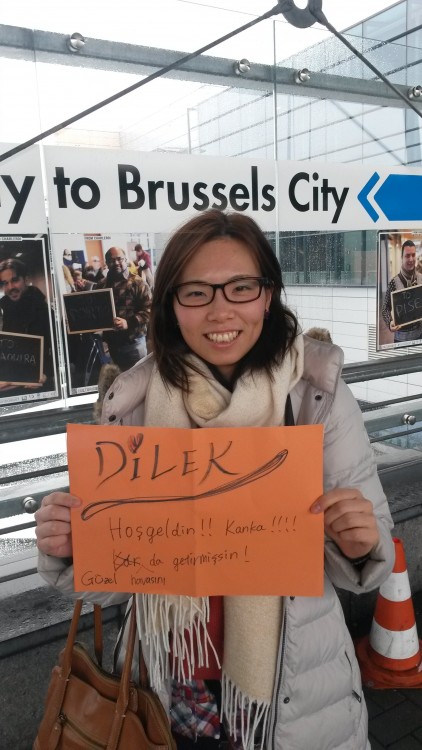 My dearest thoughtful friend prepared a welcome card for me. It is written : ”Dilek, welcome ! buddy ! You brought snow and sunny weather ”. Just when i arrived, it stopped snowing and then sun appeared. So she had to mention about both. How cute !

For the second time after Japan, being again in another country with my friend, simply felt amazing. Even though she had to work and was leaving the house early in the morning till the evening, we still had time after her work and had conversations about many things we waited to meet and talk face to face. When she was out of the house for work, I went out to discover the city on my own. To be honest, after an unexpected loss of sense of direction, I had a little panic, when I was in Kiev when it was cold and dark at an empty street. All of a sudden, using a wrong exit, I missed the right station of tramway and it took me more than one hour to find my way back. Therefor I had the same kind of fear, whether I may have a similar experience here in Brussels. I thought that was it, the idea of traveling, to get lost, not being able to find your direction, the real spirit of a journey. Feeling more brave, I totally let myself lost in the streets of Brussels and I did quite well. 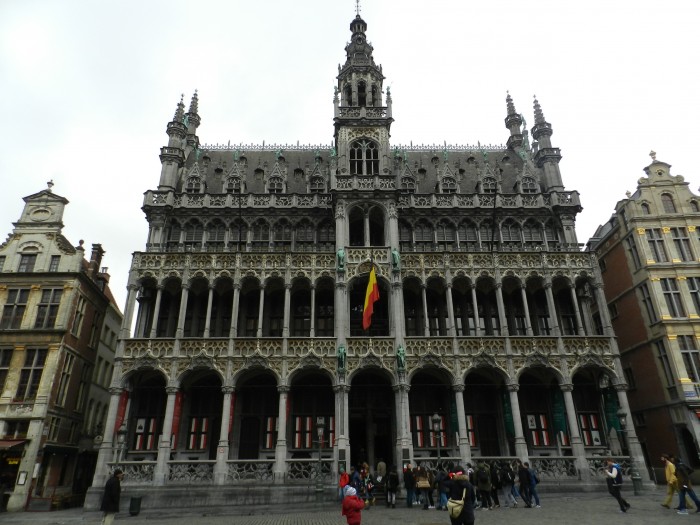 Museum of the City of Brussels at Grote Markt ( Grand Place)

When I finished sightseeing all places  I had written on my list, it was like my head was getting heavier with all the things I saw and learn, and things I will remember for a long time like in every travel. There is no way to learn the same things in the books as traveling and inhaling everything at once. 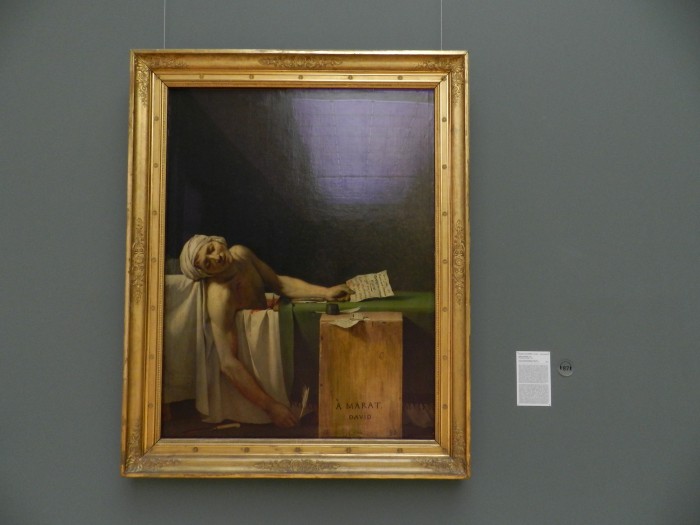 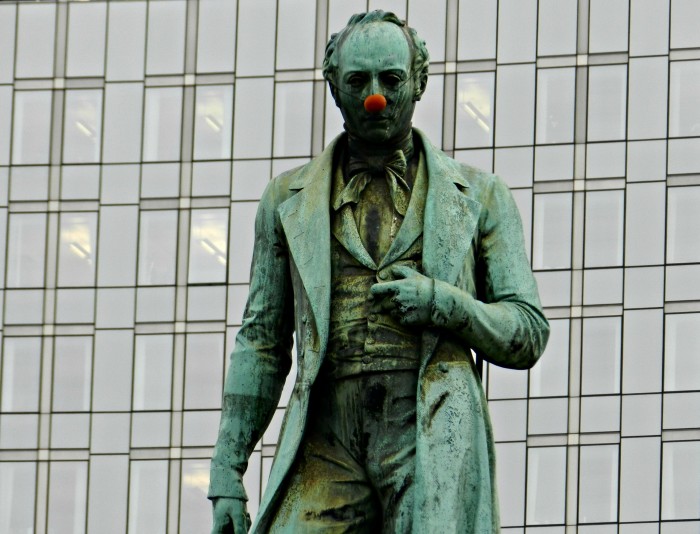 Red-Nosed Comedian? At the park by the European Union Parliament building.

It took me a couple of days to figure out  the reason of my confusion and fear about my finding the routes in the city. Everything was written in two languages, ”French” and ”Dutch”. I was thinking/mistaking that there were actually two different stations or stops everywhere. As soon as I came to understand this huge difference, I felt very relieved that everything felt into place. 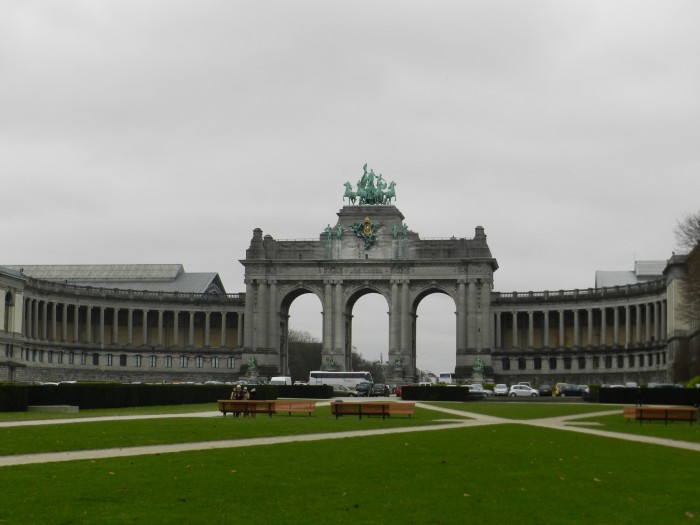 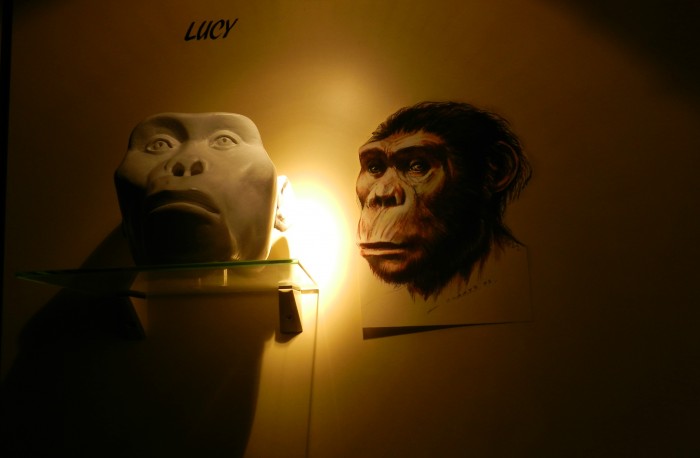 Lucy, an Australopithecus Afarensis that is estimated to have lived 3.2 million years ago, at Royal Museums for Art and History at Cinquantenaire Park.

I fell into the heaven of museums. Everyday I was visiting a museum with a great joy. At the end of the day, regardless of the physical exhaustion of a really long day, I was not complaining, as I felt on the top of the world.
If anyone may go to Brussels one day, I highly recommend them to go and see wonderful museum for Art and History at Cinquantenaire Park, where I spent a lot of my time. I could even have pitched a tent in there. Let alone the joke, Royal Museums for Art and History became my most favorite museum until now. I will never forget about how I felt during the time I was looking at/seeing the remnants of many cultures and civilizations, antiquity and many other displays. It made me feel to study Archeology and History all from the beginning.

Another tourist attraction of the city (such as Atomium, Mini Europe, Cathedral of St. Michael and St. Gudula, Place Royal, AutoWorld etc, ) was the statue of the urinating boy called Manneken Pis in the center of the city, where was really crowded. On the other hand, Jeanneke Pis, which is forming a counterpoint to her male counterpart (but less known), was being protected by iron bars and at the street of the fountain there wasn’t a soul around. I couldn’t help asking with capital letters ”WHY WAS THAT?’. Obviously one has the historical background, while the other one was just erected in 1987 with a contemporary approach to gender issues. However, why is the need of protecting it with iron bars? Don’t we like seeing a girl urinating while we enjoy and make it a big deal of an urinating boy? Do we like girls less than boys? I couldn’t  help thinking/asking these things to myself during and after my visit to both fountains. Could those fountains be the projection of the society/patriarchy? Maybe I had a flawless image of Belgium in my mind, before I arrived and witnessing an intensive attention to one little statue, where the other one was protected with iron bars, just influenced me in a way that i couldn’t quite estimate. 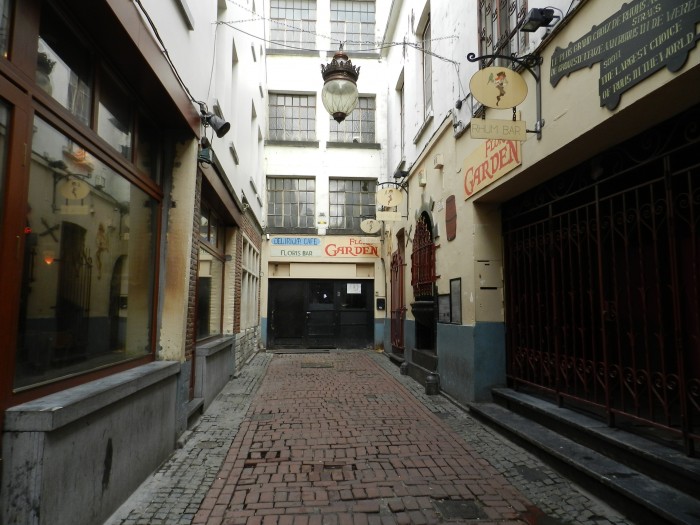 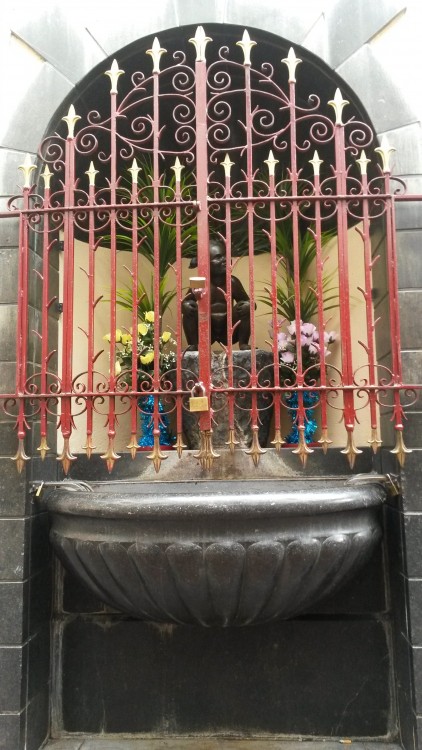 Jeanneke Pis that is protected with iron bars (from vandalism?) 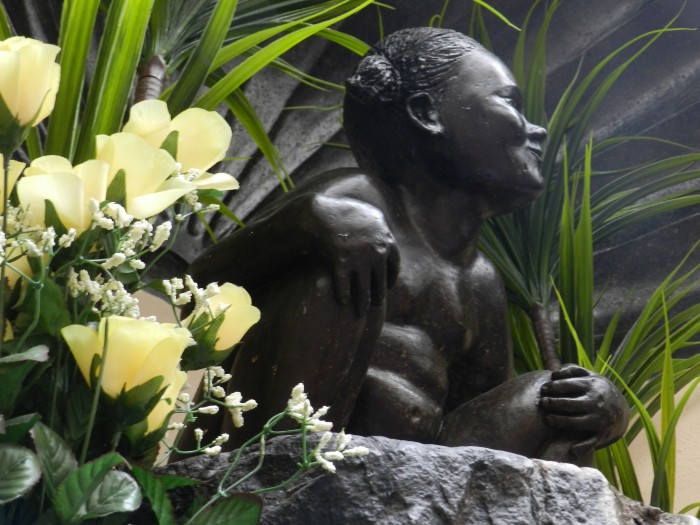 The photo I could barely took through the bars

From the surrealism of Magritte, to the cherry flavored beer, it would be a shame not to visit the medieval cities of Gent and Brugge, in the name of acquiring a complete image, to put all the knowledge in my mind to the right order. Dismissing the trains I got on to both cities and the plenty of the tourists, who were taking photos, I felt myself as I was walking back in the time of the middle ages. Seeing all those gambrel roofs, Flemish architecture, gigantic Gothic Cathedrals and Clock towers that make you feel yourself so tiny, the narrow streets and the finials that made my head up in the sky, made me feel like in Umberto Eco’s The Name of the Rose (even though the actual scene was in Italy, I still could feel myself in a medieval atmosphere by the architecture that I was surrounded.) 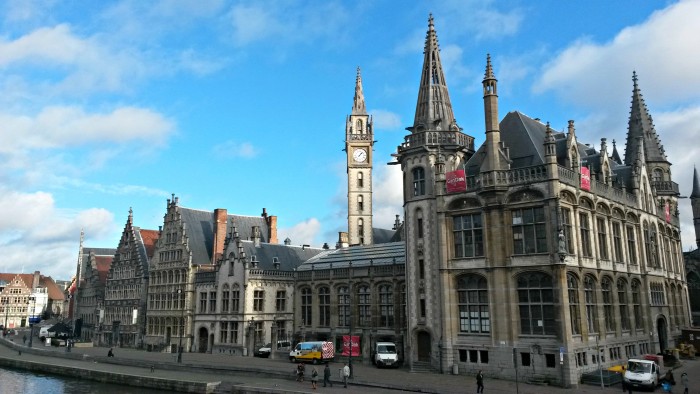 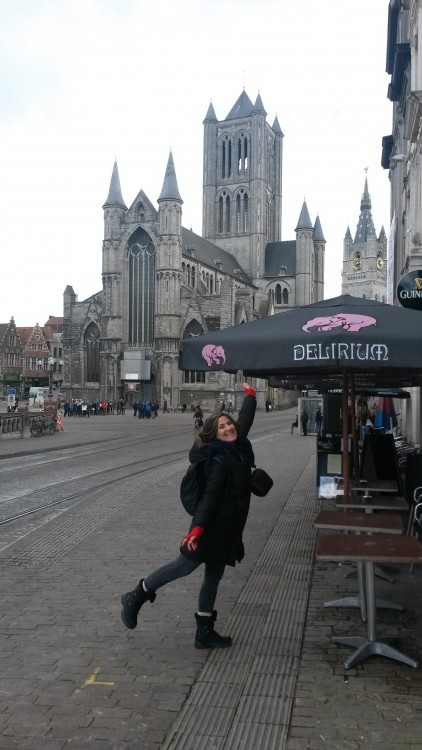 Me, with St. Nicholas Church behind and in front of Delirium Cafe, bursting with happiness 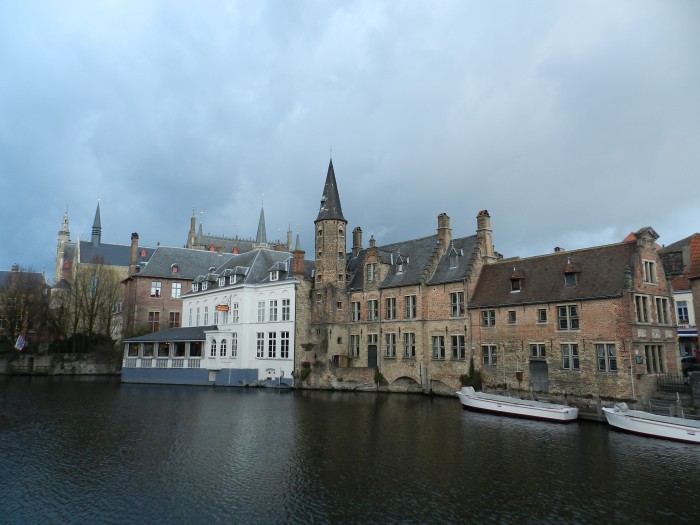 City of Brugge under clouds 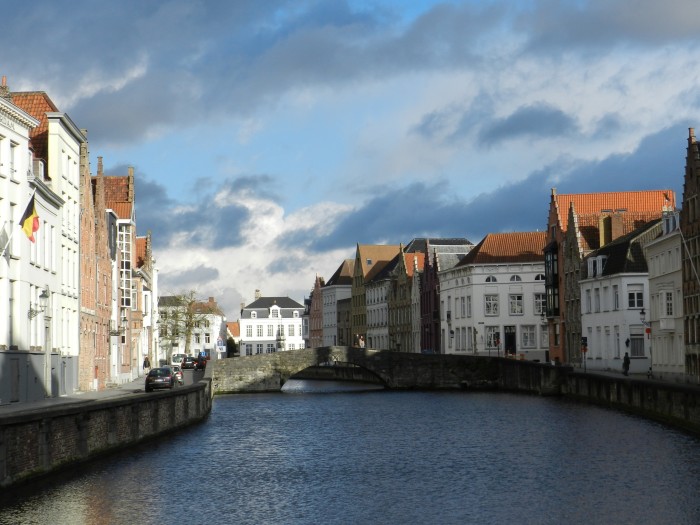 As far as I heard, on the contrary of the most people, I watched the movie “In Bruges” (2008) just after I was there, when I got back to Brussels. It totally felt amazing to see the places which were seen in the movie, saying ”Oh, I have been there.” or ”Hey wait, I didn’t see that”. After all, I tried different tastes, filled myself with art, went back in time. Most importantly, I had a rare old time with my friend, who is so generous all the time, to open her doors to me. 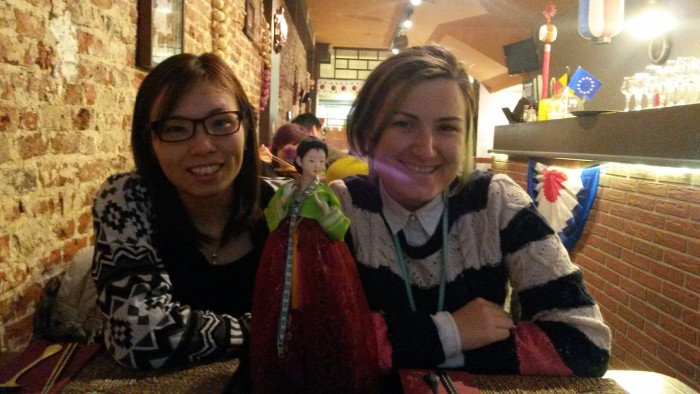 Me and Yuko at a Korean restaurant near Grote Markt 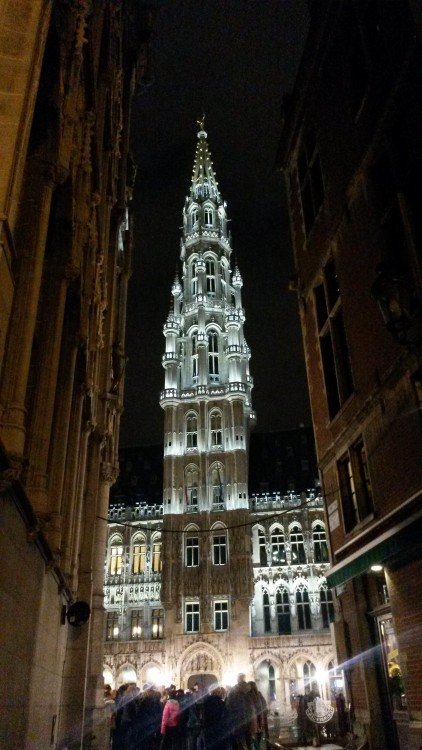 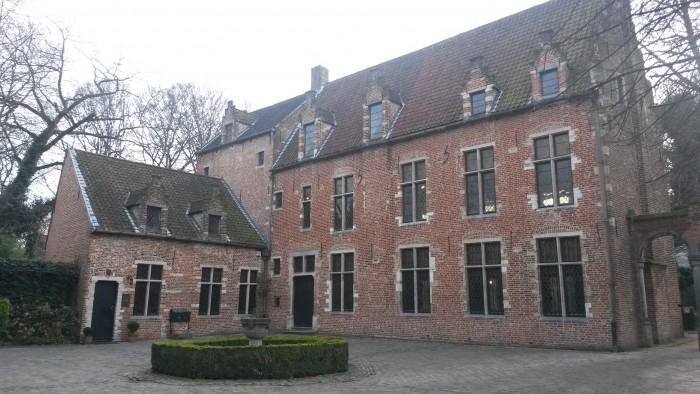 The House of Erasmus (the writer of ”In Praise of Folly”), Museum in Anderlecht district, Brussels

Filled with Art and History, I had a great time in Brussels
Rate this post